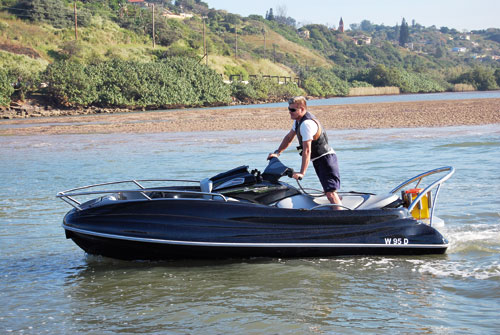 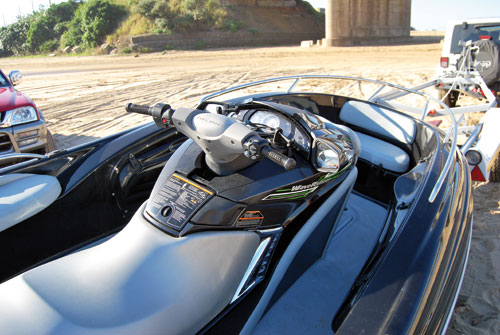 That’s when my negotiations began with Blake Rubidge, owner of Port Elizabeth-based Indigo Boats. A lot of things happened in between, with sponsors letting me down, but in November I had the jetski I wanted Indigo Boats to turn into a hybrid for me. So off we went to deliver it to them in Port Elizabeth.
I was excited and nervous, because I’d only seen one of these 430s on dry land at the National Boat show. Although I had tested a 510 Indigo Boat with Erwin Bursik before, this promised to be a totally different story.

This would be the first Indigo 430 with an 1800 HO (high output) engine, so she would have more than enough power. When it comes to power, always remember safety: this motor is so powerful that you have to hang on when you pull away.
While the 510 is 5.1m long, the 430 measures — you guessed it — 4.3m, just 1m longer than a normal jetski and about 400mm wider than a jetski that is fitted with tubies. So size-wise there’s not much difference between the 430 and a jetski, but there’s certainly much more space than on a jetski.
Three months later I had her delivered to my house. I was like a child at Christmas — my poor wife didn’t know how to keep up with me. However, the boat was not yet 100% complete as there were a couple of small things I wanted to add myself, like fitting the fishfinder, my safety container, an extra battery and the 29meg radio. 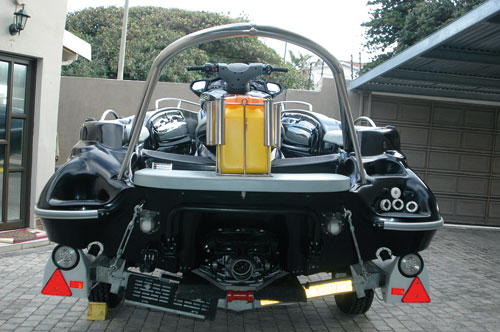 PERFORMANCE
Eventually it was time for me to put her onto the water and test her. I had my good friend, Mick Clarke, with me and we took the 430 down to the Umkomaas River for her first taste of action. The first couple of runs were very sluggish, probably because she had been standing for the previous five months. However, it didn’t take long before the cylinders were clean and firing properly. My eyes bulged and stayed as big as saucers.
Please keep this in mind at all times — this is a lovely toy, but a very dangerous one. As with any other boat on the water, if you don’t put safety first people could get killed.
When it comes to stability, the Indigo 430 has no match. She reminds me of the jet boats that they use in the USA for adventure racing in the canyons. Like her sister, the 510, you can turn her at speeds of 35-40km/h, and she just spins around. No other ski-boat I’ve tested has a turning circle like this with the same stability.
Yes, I know one should compare apples with apples, but she is licenced as a Category D craft, and although she is just over 14ft in length, I haven’t tested anything that has this capability and power. The reason I keep mentioning the power aspect is that the 430 Hybrid normally comes with an 1100 engine, but if you prefer you can supply your own jetski and Blake will convert it into an Indigo 430. Otherwise, you can place your order, pay your deposit and he will build you a 430 with the jetski you require. Although Indigo Boats is a Yamaha dealer they can fit any make of jetski.
Back to my 430 Hybrid. The Indigo 430 is very stable and you can stand up and walk around to the front of the ski section. You just cannot compare it to a jetski — with or without tubies.
The performance of this craft is almost the same as that of a normal jetski — in fact I would say that it performs better in the surf than a normal jetski. The front of the Indigo 430 Hybrid is more prominent than that of a plain jetski, and she is so much drier. I have taken the surf head-on with her, and whereas with my old jetski I would have been soaked, with the Indigo 430 I would say there’s 80% less water over the front.
Trolling is much the same as on a jetski, although I have to say that travelling at speed and turning this craft takes some getting used to. Once you’ve got the feeling for the controls, she’s as smooth as you can get. 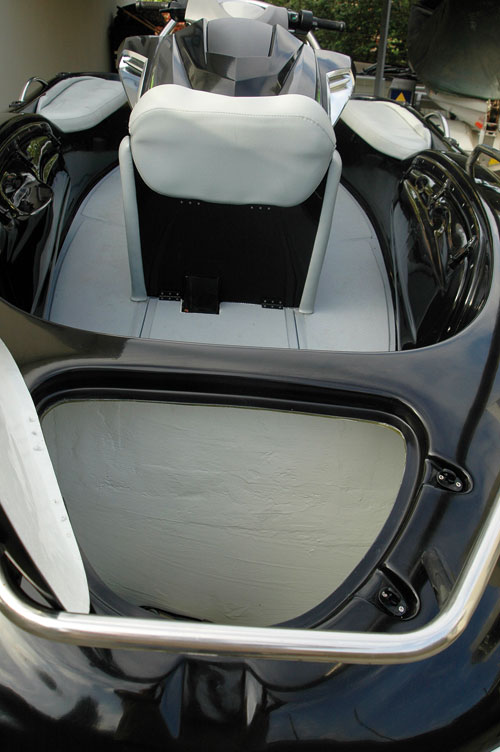 LAYOUT
In the front of the ski Blake has placed a huge anchor hatch with a seat on the inside. Underneath the front seat you will find access to the fish hatch that also has a lid in the deck. I asked him to include a drain plug on the inside of the fish hatch so that I can drain it easily if it happens to fill with water.
On both sides of the craft inside the gunnels there is space to stow your fishing rods and other gear. Right behind that on both sides there are seats and hatches.
On one side I have installed my extra battery, my 29meg radio and all my switches, and on the other side I have fitted my livebait well and my Luna Tubes.
Everything has been built in and there’s space for all your gear to be stowed, so that there’s no need for anything to be on the deck when you launch or beach. The only things I have put on the outside are the flush-mount Scotty rod holders — two on each side — and my safety container which is fitted at the back of the ski.

CONCLUSION
The Indigo 430 Hybrid attracts a lot of attention, especially from the jetski fishermen. I have received phone calls from people I’ve never met that want to see what she looks like and go for a ride, because they also want to convert their own jetskis.
For further information phone Blake at Indigo Boats, and be on the lookout for the black Indigo 430 Hybrid in the KZN area. 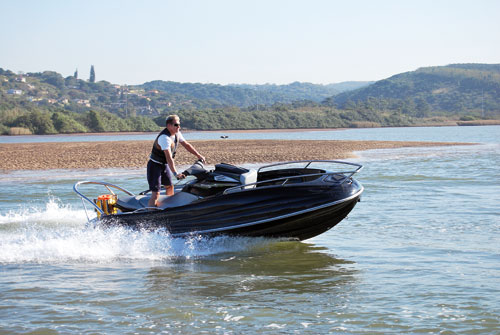