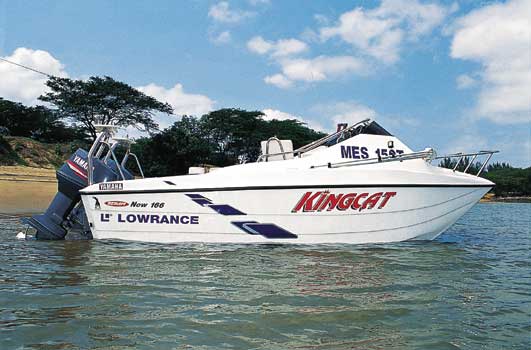 The 16ft Invader has been with us for a long time — a very long time. All through her various updates, she has proved to be a very popular, practical ski-boat along the entire South African coast.

In 1984 I tested what was then the 16ft Micro Invader, a craft I eventually owned and which gave me an enormous amount of pleasure. Indeed, she performed excellently in the surf. Then came the Invader 16 with her higher sides and more racy appearance — a craft that was a big hit. That was the 1980s and 1990s.

Now Peter Motzouris has brought out his latest model — the KingCat 166 — following the introduction of the KingCat 180 and the Invader 220 which was reviewed in the September/
October 2000 issue of Ski-Boat. 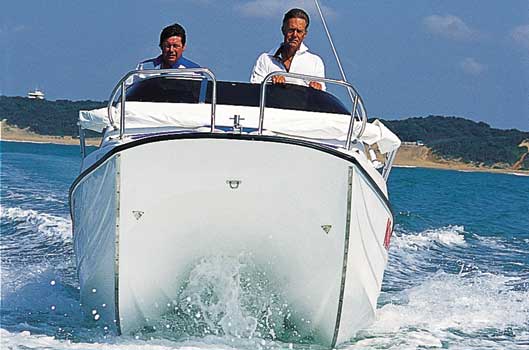 General impressions
When Peter told me that he was redesigning the Invader 160, I was a little apprehensive. Afterall, I’m a conformist and I believed that the previous model was fine. I had enjoyed her, so why change? Peter believed otherwise: “I can improve her and, at the same time, introduce some new ideas I have that will make her a lot more user-friendly. Besides which, the market requires a new look, new style and innovation in terms of current-day trends.”
When I first saw the KingCat 166 I knew he was right.

The craft was parked proudly at the Meerensee Boating Club at Richards Bay, and Peter had her displaying the new Z-Craft livery of metallic-blue on white — thereby linking his boats with the Yamaha motors he sells.

She looked very good, very different and, yes, extremely racy.
Brett King joined me for the test as he was eager to get to know the craft he and Peter would be demonstrating in the surf and at sea during the 2000 Billfish 15 000. As we all know, when Brett puts a craft through her paces in the surf, she has to be good to survive!

Conditions for Test
I hate the weather that heralds the onset of spring: it’s unpredictable and, at times, violent, playing havoc with arrangements and schedules. Eventually we succeeded in getting our act together — me racing to Richards Bay after a very early morning telephone call saying that this was the best we could expect between the big fronts that were about to ravage us on their way up from the Cape.

What we got was good, very good conditions — lots of sun, a flat sea to start with, the chop and swell building up during the morning as the north-westerly began to blow.

Launching and Trailering
Peter is once again making his own trailers because, as he says, outsourcing this aspect has led to too many problems in the quality of manufacture, as well as in the practicality of the design. “I know my trailers work,” he says determinedly.
And work it did, both while launching and retrieving the KingCat 166 from the slipway at Meerensee. The entire exercise was effortless. In fact, it was so easy that “testing” in a slip situation appeared unfair. Yet, as past experience has taught me, if everything is not just right in this situation, many mishaps can occur, making a total monkey of the skipper.

The design of the docking planks and the rollers made the retrieval especially easy — a 45 second exercise timed from the first approach to the moment Brett coupled the winch hook to the boweye.

With regard to the design, Peter has retained the expanded mesh platform running down the centre of the trailer which, in addition to providing a walkway and storage facility, also protects the hull from stones flying up off gravel roads. 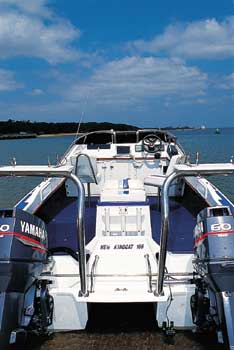 Motors and Controls
Twin Yamaha 60hp motors were chosen to power Peter’s new craft, not surprising seeing that Z-Craft is Zululand’s premier Yamaha dealer and has been for many, many years.

The previous model loved the 60hp motors, performed most efficiently with that horsepower and there was no reason to believe that the new model would be any different. It wasn’t and full details of how they and the craft performed will be embellished on in the section under “handling”.

There are two areas on which I need to comment — the controls and the steering. The controls were not only positive, but also extremely smooth, indicating that the control cables had been run to ensure they did not impede the desired smoothness. As hydraulic steerings go, the fitted system worked well and — during tight turns — provided lock-to-lock turning with extreme ease. Pulling her out of a tight turn under a lot of power was also easy and practical to achieve. The stainless-steel hydraulic ram not only looks good, but will also prevent corrosion.

Handling
These days I see the craft in action long before I get to skipper her, due to the photographic function I have been saddled with. However, this has one very distinct advantage in that I can see the hull working the water at different trim positions before I board the craft to actually experience the ride for myself.

After a session in the relatively calm waters of the main channel leading into the Richards Bay harbour, I watched her as we headed out to sea into the more “alive” water the open sea provides.

All in all she was keeping up well with Cliff Taljaard’s 24-footer, running at over 20 knots on a north-easterly heading.

After a further photographic session, it was my turn to play with the KingCat 166. With Brett as crew I took the helm and started to get her feel.

After a few minutes I turned to Brett and asked, “What has Pete done to the craft to get her to ride so smoothly?” As it was the first time he was riding the craft, Brett didn’t know, but he was just as surprised and impressed as I was.

We drove over to Peter so that I could put the question to him … “My secret!” he shouted above the wind and motor noise. “It’s the Hydro Cushion — I’ll tell you about it when we get back to base,” was all I could get out of him.

From then on I was hell-bent on getting her to slam, pound, bump or spit spray out of the front of the tunnel. Despite all my efforts, I couldn’t achieve this, not even by trimming her to ridiculous positions, whether bow-up or bow-down. Yes, the “Hydro Cushion” certainly seemed to work.
By now the north-westerly was starting to blow, providing a choppy, sloppy sea as the wind from that direction blows across the current and swell line. This provided a good arena in which to test the KingCat 166.

Running northwards at just over 20mph, we had the sea on our port forward quarter, yet she still provided a comfortable and very dry ride while covering many kilometres. This ride persisted, no matter what angle or speed I took or the chop that was prevailing. I must say that I was unable to test her in a very big, choppy sea, but was assured that the first of the new models (this was the second) had undertaken her sea trials in very rough seas and the new owner was ecstatic with her performance.

The KingCat 166 turns extremely well, is very positive in the turn and can be pulled out of full lock and onto the plane — with both throttles at sunset — in seconds and without undue stress from the steering wheel. My view is that she will handle the surf as well, if not better, than her predecessors.

During slow speeds — ’cuda troll up to the speed one would troll konas — she was stable, dry and comfortable and should provide a wonderful platform for sportfishing within the constraints of her size.

The final comment I need to make concerns her ability to perform on one motor. Bearing in mind that the motors had never been used before the day of the test, I could get her on the plane relatively easily with the “cut” motor dragging. With one motor tilted, she achieved planing speed in less than half the time (on a stopwatch). Both Brett and I were impressed.
The KingCat 166 is quite a craft! 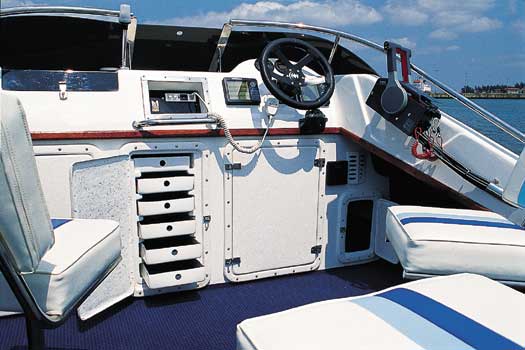 Deck layout
I was impressed both by the overall styling that Peter has incorporated into the top deck mouldings, as well as the thought that has gone into making the layout as functional as possible.
Peter believes that a craft of this size should not have four crew members hugging the windscreen, and to overcome this, he has swept the windscreen foredeck moulding inwards. This improves its looks and reduces the space. Now only three persons can comfortably stand up in the forward area‚ while the remaining one or two will have to move aft, thereby trimming the boat correctly.

The fish deck area has been improved by increasing the overall width of the craft, thereby giving a lot more room for crew to move about in while fishing.

A motorwell/false transom has been incorporated, but it has been kept relatively low to ensure that any water coming onto the deck during surf work flows off very quickly. On the converse side, I could only get water onto the deck by serious reversing into the chop.

Another major re-design took place in the front console windscreen area to provide adequate, accessible and dry stowage for tackle, safety equipment and the radio.

The centre coffin hatch is big enough to carry fuel and batteries, yet is not so overpowering that it restricts deck space.

I found the craft very comfortable to skipper with all her gauges and instruments well placed for visibilty and ease of adjustment.

Finish
I said in my review of the Invader 220 that Z-Craft’s attention to detail and overall finish had improved dramatically. Well, on the KingCat 166 this trend has continued and reached an extremely high level.

The quality of finish is certainly apparent in the moulding, glasswork and hardware. Equally obvious are the little practical developments Peter has introduced. A small example is the stainless-steel tubed drainage system from the cubbyhole and radio compartment to the deck. This is but one of many.

Peter can be just as proud of the craft leaving his factory as the new owners will be for many years to come. 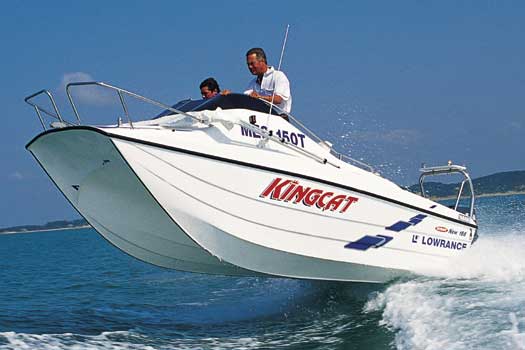 Conclusion
This size craft has proved itself over the last two decades, and with the improvements in design and styling of the new KingCat 166, I am totally convinced this new craft will continue this long tradition.

The sportfishing intensity of our sport is moving to Moçambique and it’s worth noting that the Kingcat 166 can be towed with undue effort. No doubt, she will provide a comfortable and durable platform from which to pursue all types of game- and bottomfish, including fishing light tackle for sailfish and marlin.

Yes, the KingCat 166 is quite a boat and very worthwhile looking at. If you get the chance go for a ride on one, take it. You won’t be sorry!