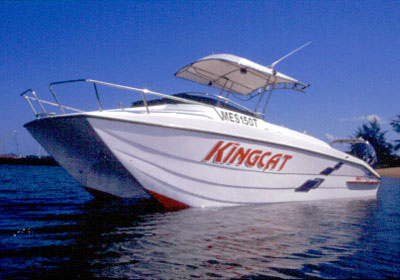 The first of a new generation of craft designed and built by Z-Craft’s Peter Motzouris came onto the water during the early part of 2000. This launching coincided with a major corporate identity change for Z-Craft after Peter and his wife, Marilyn, acquired sole ownership of what was previously a family-owned boat building company that has been around for the last 30 years.

With the Kingcat 180 and the KingCat 166 taking the traditional ski-boat market by storm, Peter believed that a bigger KingCat was needed — one that could fish marlin as well as the gamefish off the eastern seaboard of South Africa and Moçambique. So the KingCat 200 was conceived and first launched towards the end of 2001.

GENERAL IMPRESSIONS
During the 2001 Billfish 15 000, Kobus van der Merwe, the new owner of Lunatic — the first KingCat 200 — happened to be camped adjacent to where we kept the craft Merle’s Moon on which I was fishing.

A few days later Peter Motzouris arrived at Kobus’s camp and I was permitted to have a much closer and more detailed look at Lunatic.

She looked good and Peter said there and then that a boat test on this model was imminent. However, it wasn’t until late February 2003 that Peter managed to get me to test both the KingCat 200 and the latest version — the KingCat 226.

Seeing both of these craft on the water at Richards Bay on the morning I arrived for a day of testing made me catch my breath. They truly are magnificent. 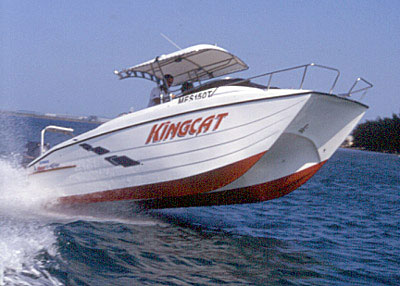 CONDITIONS FOR TEST
During a strong north-easterly, Richards Bay is an excellent venue for boat testing. And true to form on the Zululand coast, a north-easterly was blowing as it had done for nearly 48 hours and, as luck would have it, it was only rumbling through at about 15 knots.

The beauty of Richards Bay is that one can always find a variety of conditions in which to test the craft: protected water in the harbour, a choppy main channel area with some swell to give the water lift, a very mushy harbour entrance, and — out to sea — the lousy sea only a north-easter can kick up. In addition there was quite a big swell running on the day, presumably due to Cyclone Japhent that was about to hit the central Moçambican coast.

All in all, a good day testing and playing with the Kingcat 200 and KingCat 226 ensued.

LAUNCHING AND TRAILERING
Peter’s innovative ideas don’t only cover boats — he has also extended his thinking to include trailers.

Trailers for big boats — especially those that have to be towed long distances at reasonably high speeds, then be used during launching and retrieval off sandy beaches — need more than good welding, a good galvanising dip and fancy mudguards … a lot more.

An excellent tow hitch, top-of-the-range axle and efficient brakes are essential, but it’s the design of the trailer for the boat’s retrieval which is paramount. Peter has been building purpose-designed trailers for his boats for many years now. As a result he has ironed out the problems experienced while launching and retrieving his craft under practically all conditions from the Cape to northern Moçambique, and believes he has now got it right.

During the test I experienced the retrieval from a slipway. It was understandably easy, but I have no doubt that it would be almost as simple on the sand.

By the way, Peter has also developed a novel idea for a double-axle trailer which was used on the KingCat 226. I will expand on this innovation when I discuss the test on the KingCat 226 in the next issue of SKI-BOAT.

MOTORS AND CONTROLS
Kobus had opted to use his 90hp Yamahas from a previous craft on Lunatic. They were reasonably dated but still running perfectly and, as no-one was certain what motors the KingCat 200 needed, he decided he might as well try them. Now, 18 months later, they are still on Lunatic and are pushing her admirably.

Throughout the test and photo session, the twin 90hp Yamahas made this craft perform extremely well. I will further embellish on this aspect later on in this report.

Lunatic’s steering and throttle are well positioned to make skippering a pleasure, and there was no tightness during trials on this well used-rig. 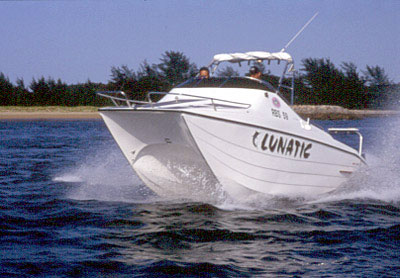 HANDLING
It is extremely hard not to have preconceived notions prior to actually putting a craft through its paces on the water, more particularly after watching a craft launch through the surf at Sodwana and then seeing the same boat out at sea trolling and running. This was the case with the KingCat 200.

In addition, Brett King was at the helm while she was performing in front of the camera. If there’s anyone that can make a ski-boat come to life, it’s Brett. Later, viewing the dozens of photographs of Lunatic, the one common thread is, yes, the KingCat 200 is stunning, but more than that — she’s full of life.

When I eventually took her controls and headed almost directly into the north-easterly chop in the main channel leading out of Richards Bay harbour, I too could feel this liveliness. She rose onto the plane effortlessly and, sitting at 3 800rpm, we sliced over the choppy surface until we hit the maelstrom of ugly water in the harbour mouth. During this run she seemed to get a lot of air through her tunnel and spray was spread outward from her chines low and far aft. It was a lovely sensation of comfort and speed as we literally flew across the bay.

When the sea, subjected to swell, wind and tide, is squeezed between two immovable piers, it results is an hydraulic action that makes it just plain nasty, and any craft venturing there has to fight its way through. The KingCat 200 was no different, but using her pronounced bow and heavy shoulders while sitting deep in the water — having come off the plane — we progressed through this water quite comfortably.

Once away from the influence of the harbour mouth, the easterly-roughened sea looked quite flat in comparison, and I opened her up on a run up the coast. Just on the plane at 3 200 revs with the GPS reflecting an SOG of 13 knots, her ride was very comfortable.

At 3 900/4 000 revs in that sea, we were running at 17 knots at a speed still comfortable enough to be sustained for a long period. The very first impression I got and remarked on was her softness — she seemed to top the waves and not pound before topping the following crest. As the wind and sea were marginally on her starboard bow, the run up the coast was sustainable.

Putting her bow directly into the wind and sea, I had to pull back on the throttles slightly to remain comfortable while still maintaining a good SOG.

During the run back with the easterly “white horses” pushing me, she rode exceptionally well. With a little bow-up trim I didn’t experience any indication of down-swell yawing nor the suck-back after reaching the bottom of the trough. Furthermore, what impressed me about the KingCat 200 was that, unlike a lot of cats this size where the motors generally change tone as the craft’s transom — via the motors — forces the props to move up and down in a vertical plane, Lunatic was not affected this way.

As the KingCat 200 is designed with marlin fishing in mind, trolling for sustained periods with lures is becoming par for the course. I spent a long time on the troll at 8/9 knots, taking the sea at every conceivable angle. Not only did she track well and maintain a fairly constant speed over sea, but we were also well protected by her very substantial windscreen. Only the odd bit of wind-driven spray got to us.

To get back to her motors, I was surprised at how well they performed and the thrust they put out, both getting onto the plane as well as getting her out of an extremely sharp turn and back onto the plane, as one would require in a surf situation. Brett concurred with my opinion, having handled this model in the surf a few weeks prior to my test. The only time I sensed either a lack of power or that the motors were aging was during single motor trials. She battled a little to plane on one motor.

I really enjoyed the KingCat 200 and would take her to sea any place, any time.

DECK LAYOUT
Z-Craft has really come of age. Now, not only does the hull work well on the water, but the finish, layout and extras all make Peter’s latest generation of craft equal to anything on the water. What’s more, his innovation — especially in layout — incorporates the practical needs of the South African ski-boater.

In this report I will only mention the aspects of this craft that got my attention as being something extra, different or new. First and foremost, I really enjoyed the substantial, high windscreen, not only from a protection point of view, but also because it allows for a well-designed cockpit area. The windscreen is very skipper-friendly and incorporates a number of cupboards and hatches, all of which enjoy the same protection from the elements.

Keeping marlin fishing in mind, the sturdy fighting chair is well positioned with a full swing area and lots of deck around it for the crew to work when fighting a big fish.

In the false transom of the KingCat 200 Peter has incorporated a livebait tank with a glass front on the port side and a built-in LunaTube on the starboard side. When not in use, both have upholstered seat tops on the hatches that cover these extras. A high-pressure pump feeds either or both of these systems.

The KingCat 200 has a substantial T-top with roll-up forward canopy that also has top-mounted rod holders. The entire T-top is hinged to enable it to fold down during towing. It is well made and very practical to use.

The finish and quality of all the extras on the craft is outstanding, and the thought and experience gained from years of ski-boat fishing have made the KingCat 200 a superb craft.

CONCLUSION
In offshore boating a manufacturer of boats needs to have had experience — many years of experience — building boats to maximise their practicality. Peter has been “around the block”, so to speak, and he also has one extra and somewhat unique capability, and that is he has the inate touch of being able to develop and refine craft performance. Each and every model seems to get better and better.

The KingCat 200 is one of those craft that has all Peter’s experience and knowledge built into her. She’s a very, very fine boat indeed.