A CRAFT OF DISTINCTION 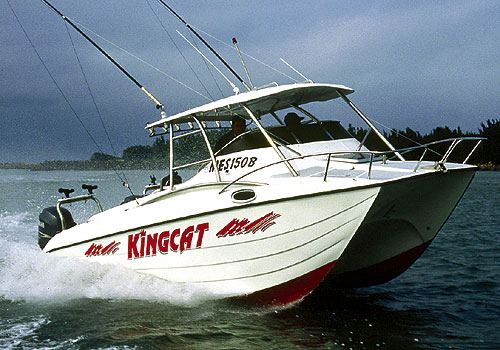 “AND this?” I exclaimed as Peter Motzouris of Z-Craft showed me around his factory in Empangeni some time ago. I was watching a long hull being pulled from its mould. “It’s the new KingCat 2406 I wanted to show you,” was the reply.

Peter went on to explain in detail his reasoning behind the design and production of this addition to his KingCat range of offshore sportfishing craft. He then went on to tell me that he’s also going to produce another model, a KingCat F200 — a new 20ft ski-boat (see article on page …) for the particular segment of the market that requires an easily towable, big ski-boat for the Moçambique coast.

Incidentally, Peter tells me he now manufactures 21 models of craft.

The next time I saw the KingCat 2406, she was parked at Richards Bay Ski-Boat Club on her double-axle trailer in all her splendour, ready and willing to face the wild ocean King Neptune had produced for us on the day of the test. Boy oh boy, did she look beautiful, basking in the early morning sun, resplendent in all her finery with her outriggers rigged and poised for action. 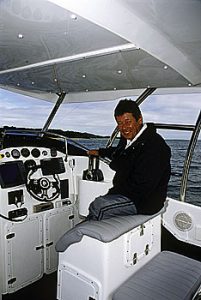 Peter’s new KingCat 2406 is, in his opinion, a craft well positioned in size, style and capabilities to undertake these arduous long runs in the notorious side seas to and from the deep water where these fish congregate, where the fast-flowing north-to-south current is up-welled along the steep continental shelf in this area. After spending a morning on the KingCat 2406, and especially after recently spending three days in that area in some horrendous seas during the 2006 Blackwatch Marlin Tournament, I concurred with Peter. A big craft such as the KingCat 2406 would be my minimum requirement to adequately fish this area.

However, the words of the Port Controller really destroyed my day. Upon requesting permission from the control tower to proceed to sea, I was told, “The port is closed to all ski-boats.” The howling south-westerly gale during the preceding four or five days had pushed up a swell so big that even the pilot boat was experiencing difficulties getting to sea to do her job. The Port Captain was not going to risk allowing ski-boats to venture through the notorious washing machine at the harbour entrance to simply “play” in the raging sea and strong westerly wind.

Due to time constraints, I had only one option and that was to play with the KingCat 2406 in the big swells that were coming in through the harbour entrance and rolling against the harbour’s southern main pier. Add to this the use of excessive speed over water and westerly chop in this area — as well as the occasional breaking wave over the sandbank on the harbour entrance side of Pelican Island — and I got a reasonably good impression of what this craft would be like out at sea.

With these restrictions in mind, and remembering the vast amount of time I’ve spent in all sea conditions with the slightly smaller KingCat 206 of the same hull design, I feel confident enough to commit my views of this craft to paper.

The KingCat 2406 is not just a pretty face — a fact well portrayed in the main photograph in this review. She is also incredibly stylish, her royal lines quite apparent as she virtually flew across the choppy water of the bay during the photo session.

Even with her very pronounced heavy shoulders, this craft rides the sea in a very prone position, which is determined by the KingCat hull design. In addition, the hard-top configuration is aeronautically designed to ensure that even when riding at speed into a strong headwind, the bow is not kited upwards by the wind factor when, for example, sea conditions force the craft’s bow upwards as the transom drops into a trough. The bevelled edged of the hard T-top contains the airflow to prevent side spillage which tends to cause a resultant dropping of a sponson.

During exhaustive trials, the only time I could get her to react was at speeds over 30 knots, which in real terms one hardly ever achieves out at sea. Even then, the craft could be laterally stabilised by trimming the twin 150hp Yamaha four-stroke motors substantially in a bow-up position. I was again surprised that a craft of this length could be trimmed to the degree she was at the sort of speed mentioned. It’s asking a lot of a motor to lift as well as push a craft of this size. 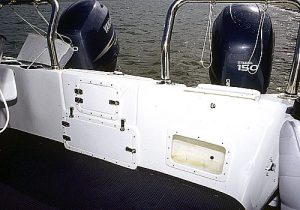 Talking motors, Peter has fitted twin 150hp Yamaha four-stroke direct fuel injected motors to the KingCat 2406, and even though they were swinging heavy 19-inch pitch, counter-rotating stainless-steel props, they achieved incredible performance both out-the-hole and during high speed trials. With a strong beam wind she was achieving speeds of just on 40 knots, which I found extremely impressive and exhilarating, although unnecessary on an offshore ski-boat, even if she is a big ski-boat.

In the big swells that were running fairly closely behind one another, I could ride the back of a swell, pull her completely around and outrun the following swell — a manoeuvre that requires a lot out of this size boat’s inherent design, as well as the motors’ ability to dig her out of the hole without cavitation. During simulating surf launching (i.e. Sodwana style), she got on to the plane surprisingly quickly and I could control her easily while taking the oncoming swells at a good angle off the 90° mark.

At slow and moderate trolling speeds she settles well in the water, offering a high degree of lateral stability. From what I could determine, very little wind-driven spray would be felt by those aboard. This was in line with my experiences aboard the KingCat 2006. In fact, I was surprised at how similar the much bigger craft’s ride was to that of her smaller sister.

What really impressed me about Peter’s new KingCat 2406 was the layout of the fishdeck. It’s ideal for her intended purpose as a big gamefish fishing machine, yet is also perfectly adaptable to chasing our smaller gamefish species, such as ’cuda and, above all, flicking for Natal snoek which are prevalent in this area.

I enjoyed the openness of the deck area, the siting of the fighting chair, the Luna tubes in the transom wall, the above-deck livebait well and the seating under the hard-top canopy. Yes, there is ample space to “work the deck” while marlin fishing to set the lures and, more importantly, while a big fish is being fought and leadered. Also, the centre section of the transom can be easily removed by simply unclipping four catches, thereby allowing a big tuna or marlin to be slid through on to the fish deck (see photos next page).

What’s more, during those long hours of waiting for a strike, the upholstered seat with backrest allows the crew on marlin watch to be comfortably seated in the shade of the hardtop with a good view aft. I must also mention the swivel-mounted cocktail/utility table that swings on an extended arm from the middle of the crew’s “relax seat”. I think Peter looks after his crew too well!

The outriggers Peter has perfected for his craft are stiff and well supported on stainless-steel mounts on the aft of the hardtop. They are deployed from the underside via a practical, well thought out locking system. The end result is that the gunnel area is free so that one can move forward if the need arises. 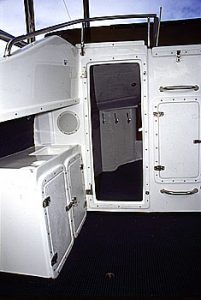 The “cabin”/helm station area is spacious, allowing the skipper to do his job in comfort with superb electronics positioning. This cabin area can also be enclosed with clears — a topic where Peter and I totally disagree. I would like them supplied as standard, and he hates them.

The binnacle throttle/gear lever control box is also mounted in a very practical position. A top-of-the-range hydraulic steering system has been installed with a superb steering wheel that provided a good grip and was easy to swing the craft both into and out of tight turns.

So often when the crew want to access tackle drawers, forward hatches or cupboards in and around the helm station, they are restricted and can’t get past or work alongside the skipper without clashing. Not so on this craft, regardless of how much space the skipper takes up.

What’s more, on the port side of the helm station, fitting in snugly under the forward console and gunnel area, flush against the craft’s side, is a kitchenette area or bait-prep station — whichever is more important to the owner — with a working top and a freshwater-fed basin.

A large forward section under the foredeck, accessed by a large, removable door, can either be used as storage or fitted with a bunk if so desired by the owner.

Within the confines of the fishdeck area, no less than six under-deck, flush hatches are fitted — four are for fuel, one is a fish hatch, and the last one can be used as a further fish hatch or large livebait well to take any extra livebait if the transom circulating livebait well is full.

As always, the little extras Peter has fitted to enhance both the looks and fishability of his craft are too numerous to itemise, other than to say that their combined inclusion made this KingCat 2406 a craft of distinction both in practical application as well as in looks.

The finishes used by Z-Craft in their latest model, are, simply put, outstanding. Their attention to detail in all aspects — big and small — is putting Z-Craft on a par with many of the imported craft I am privileged to look at and try out on the water. On the KingCat 2406, I was particularly impressed with the stainless-steel work supporting the craft’s hardtop. Not only was it very solidly constructed, but it was also designed in a way to make it look neat and stylish.

The KingCat certainly shows off the superb workmanship and finishes that now emanate from Z-Craft’s Empangeni factory. Peter, Marilyn and son Dustin can be extremely proud of the standard they have attained. 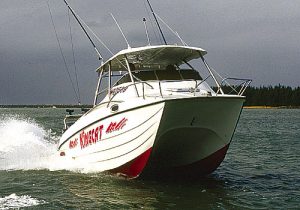 The KingCat 2406 was towed on a double-axle trailer that, I noticed, was using LA Axles, as well as Geoff Shires’s (who now makes LA Axles) specially engineered heavy-duty tow hitch. This hitch not only looks robust, but also obviates any chance of the tow hitch jumping off the vehicle’s tow ball during onroad or beach work, and particularly whilst loading and unloading. Peter swears that the axles and tow hitch are the best he has ever used.

A good trailer doesn’t come cheap these days, but Peter has, with years of experience, managed to produce a range of trailers that really work. Not only do they provide a smooth tow, but they’re perfectly made for launching and retrieving the craft either from the slipway or off the beach.

I experienced both the launching and retrieval of the KingCat 2406 and the KingCat F200 from Richards Bay Ski-Boat Club’s slipway with a crosswind blowing extremely strongly. Peter drove both craft onto the trailer with accomplished ease, drawn from a lot of experience, and the help of a well-designed trailer.

The twin 150hp Yamaha motors gave an initial kickstart to Peter’s three-litre bakkie as it began to pull this big rig out of the water. After they were switched off, we were high and dry within a few minutes. It was an extremely easy exercise for a craft of this size.

As I said, the KingCat 2406 is not just a good looking craft. She also has all the capabilities and inherent design features of Z-Craft’s many years of experience to ensure that she will provide prospective owners of such a craft with a reliable and practical, large offshore sportfishing ski-boat. And, as part of the deal, many, many years of boating pleasure as well.