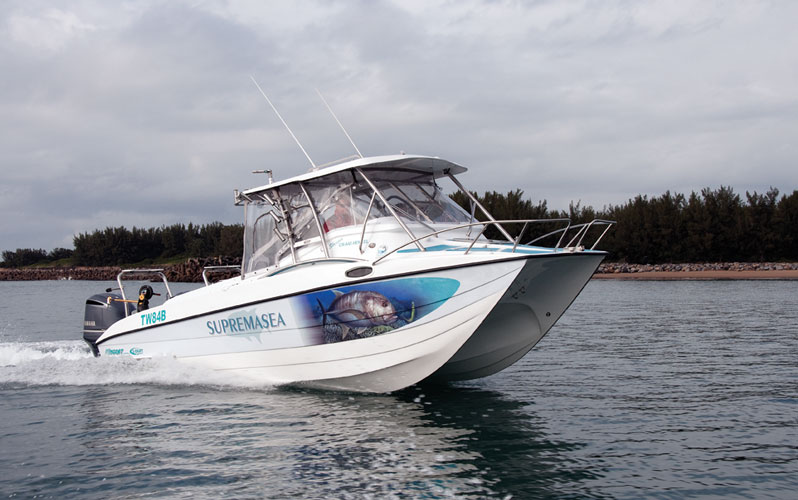 I THOUGHT Christmas had come early when I received a phone call from Erwin Bursik asking me to accompany him to Richards Bay to test a new Kingcat 2406 with a hardtop. This was the first time I’d had a chance to test a Z-craft boat, and it’s something I’d been wanting to do for a while. This new 2406 had been custom-built for a customer in Richards Bay who had a lot of input with the layout and specs.

I’ve seen many Z-Craft boats in the marketplace and on the water, and I knew the late Peter Motzouris, so am generally familiar with his designs and their workmanship. I also know Peter’s sons, Tyron and Dustin, who are both involved in the business, so I was keen to see how they were doing.

Erwin and I were at the Richards Bay Ski-Boat Club when Tyron towed the craft past us to the slipway. My first impression was “Wow — that’s a huge boat!” And yes, she is a big boat, but on closer inspection she looks bigger than she actually is because all Z-Craft boats are built to stand proud — in and out of the water.

When you see a Kingcat out at sea the bow always seems to be high up in the water. This has huge benefits not only on the overall performance of the boat, but also because it means the ride will be very dry. 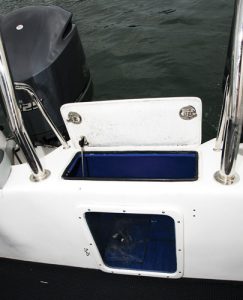 Although I’ve seen plenty of Kingcats around, I’ve never actually been aboard one, so I couldn’t wait to take a closer look. One thing I’ve always noticed from afar, though, is that their decks look very spacious. However, it’s only once you’re actually on board that you realise just how spacious she really is.

I stayed aboard Supremasea while Tyron reversed her into the water and she slid off the trailer very smoothly. Remember, this is a big boat, so you have to be fully aware of what you’re doing all the time.
I had a quick look around the deck while Tyron parked the car and Erwin got the photography boat — an F200 — into the water. To begin with we put the Kingcat 2406 hardtop through her paces in the bay so that Erwin could take the necessary photographs, and then Tyron and I went off to play with her.

Unfortunately, the conditions were not good at all. The sea was all over the place, and anyone who is familiar with Richards Bay will know that the sea in and around the mouth can be rather unpleasant at times.

Supremasea’s owner gave Tyron a list of requirements for the boat, including what engines, electronic equipment and outriggers he wanted — essentially the best on the market. Supremasea was fitted with twin 225hp Yamaha 4-strokes with binnacle-mount controls, by far the smoothest I have ever felt on a boat. The steering was also very smooth and light, even with the big engines on the transom.

And yes, it might be overkill to have such big engines on this boat, but take her for a ride and feel the power — and then let’s talk again. It’s like going from driving a 1600 Toyota Tazz to an Audi R8. I still believe it’s better to have too much power than too little. Supremasea does have too much power, but her oomph is simply awesome. From stationary she gets on the plane in less than three seconds.

I have to admit that on the first pull away from stationary to full throttle I was terrified. We were airborne almost immediately. I had not expected that kind of reaction and power-to-speed ratio. My immediate reaction was to tap off on the throttles as quickly as I had pushed them open, and then work my way up gradually …

The Kingcat’s ride is so smooth — even in bad conditions — that once you’re on the plane you don’t realise how fast you’re going. We were cruising out at sea when Tyron suggested I look at the speed on the GPS — we were doing 40kph! 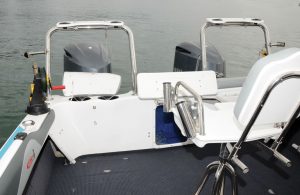 I had to slow down dramatically to get us to trolling speed (4 knots) just to get the feel of it, then I worked my way back up to 12 knots. She was steady as a rock and bone-dry — not a splash of water came over the front or the side.

The Kingcat 2406 was very steady in all directions. Whether with a following sea, turning around and heading straight into the swell, or with the swell coming from the side, I didn’t once feel uncomfortable. Even at cruising speeds of 20 knots there was no pounding. I also did my usual figure-of-eight test and could not get her to cavitate at all.

This boat would be easy to launch from the beach. She has a push plate at the stern, and with all that power behind her — as well as quick response when turning — I believe she would handle the surf with ease.

Getting back to her looks, the hardtop fitted to the Kingcat 2406 gave her a great finish. It’s also the place where Z-Craft have fitted the outriggers and reels for the teasers, as well as some extra stainless-steel rod holders. A few gaff holders have also been fitted to the hardtop. They are easy to reach and there’s a small spotlight in the middle. 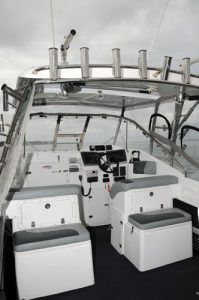 The windscreen has been raised much higher than is the norm, which means that the clears they have fitted are much smaller and easier to handle. I think it’s a great idea.

The window in the centre of the console does not open like on most boats — it doesn’t slide from side to side and is not removable, but it flips up from the console towards the outside.

The 2406 has a very spacious hatch in the front — big enough to fit a bed — and all the batteries have been fitted in a small compartment in the floor, protected from all the elements. She has been fitted with state-of-the-art electronics including two combo units, cruise control and enough radio equipment to make a DJ jealous.

The two bum boxes that have been fitted are very comfortable and provide plenty of storage space. The fuel hatches are inside the deck, and I believe there’s enough space for almost 24 jerry cans.
The Luna tubes are fitted at the back with the pumps sunk into the floor. The livebait well is in the middle of the false transom, and it’s so big that it reminded me of my koi pond at home. Downriggers were fitted on both sides of the gunnels, and the gunnels are higher than knee height and nicely padded so that you can lean against them.

The roll bars for the rod holders in front of the engines were designed in a U-shape so that a crew member can easily sit on the false transom between the rods while fishing. I saw this idea a couple of years ago when a friend of mine from Bloemfontein had his rod holders designed like that, and we figured it was just a matter of time before boat builders caught on to this idea.

The fighting chair is situated in the middle of the floor and would be easy to manoeuvre while fishing. It can also be removed when it’s not required. This client certainly knew what he wanted and did a great job designing the layout of his boat. The finish on this craft is also of a very high standard.

As I mentioned earlier, the 2406 was very easy to offload on the slipway, and the changes Z-Craft have made to the trailer, including adding tunnel guides which made it much easier to drive this craft back up onto the trailer. 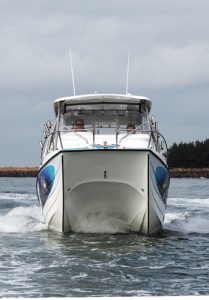 Summing up, her handling capabilities out at sea were excellent. Stability-wise, I think there are but a few boats that could measure up to her.

I have to say that I now understand why everyone who owns a Z-Craft boatraves about their prized possession. This was my first experience aboard a Kingcat and it was a very pleasant one that I hope to repeat soon.

If I was in the market for a marlin boat I would definitely put the Kingcat 2406 on my list. She is big and spacious, but is still light enough to tow to Moçambique. With Z-Craft producing boats of such high quality — and with the option of customising her to your requirements — what could be better?

I’m thrilled to see how well the next generation of Motzouris boys are doing, and I wish them great success with their excellent range of Z-Craft boats.