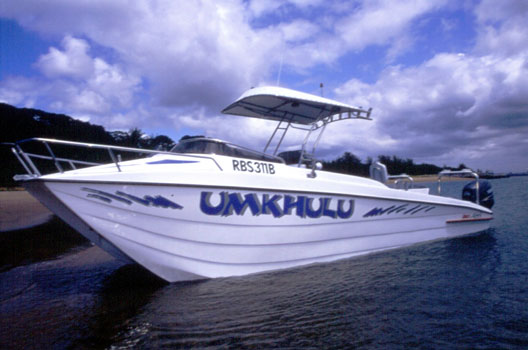 “A26 FOOTER is on the way,” Peter Motzouris told me as I was completing the test on the KingCat 226 during June 2003 (see SKI-BOAT July/August 2003). Other than to say that it was a 26 footer, he didn’t pander to my curiosity by embellishing on the statement. It was a definite case of wait and see for yourself.

During the intervening few months I often wondered what direction Peter was going to take in the design of this craft and what segment of the South African market he was aiming for. With the odd report filtering down to me from friends who had visited the Z-Craft factory, I began to create a mental picture of what the KingCat 260 was going to be like.

On the day of the test, as I arrived at Richards Bay Ski-Boat Club’s jetty, I saw Peter’s son, Dustin, and Brett King spinning around the bay and had my first glimpse of the craft.

She is, to a degree, the craft I had visualised, possibly because after twenty-odd years of association with the Motzouris family, and Peter in particular, I can almost read his mind.

In essence, there is a gap in the domestic market for a craft that is big enough to provide real comfort whilst at sea, without the array of niceties that go into smaller sportfishers. The advantages are basically two-fold — cost and trailerability.

Braam Duvenage, the proud owner of the first KingCat 260 Sport, and his fishing buddy, Dawie Kotzé, wanted just that. Their fishing is predominantly out of Richards Bay where their craft is housed in one of the club’s big lockers on a launching dolly. They fish seriously for bottomfish and gamefish, as well as marlin, and are not scared to travel vast distances to get their fish. They also love night fishing.

Ski-boats, as we have come to know them, were all too small for Braam, but Umkhulu, his new KingCat 260 Sport, has fulfilled his needs and desires perfectly, he told me. 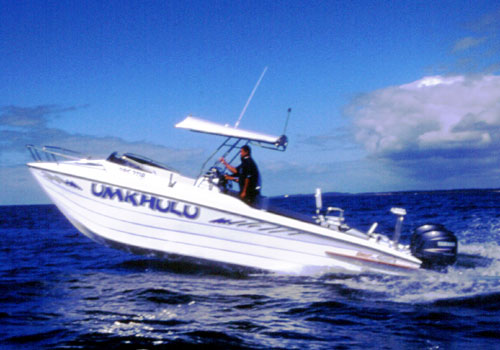 Then my eyes drifted from the KingCat 260. I saw Peter at the helm of what was to be the photo boat. I cursed silently. Under heavily overcast skies and at sea in a moderately strong north-westerly wind, I didn’t need to get wet or, more importantly, get my camera wet. Peter had promised me a KingCat 180 to do the work, but he had brought along what seemed to be a 16 footer. Boat builders!

As the two craft got closer, I could see what a fool I had been. The first boat onto the jetty was indeed a KingCat 180, but the much bigger KingCat 260 Sport was completely dwarfing her.

After spending a lot of time on both craft during the morning, it confirmed my first impression: the KingCat 260 is bigger — much, much bigger.

Peter and I had waited a few days for the test because heavy cloud had consistently hung over the KwaZulu-Natal coast. We had one day remaining before he had to travel away on business, so it was Hobson’s choice — I had to do the test, come what may.

Although the weather was dismal on arrival at Richards Bay, there were clear skies far out off the coast. And with the moderate north-easterly blowing, we were ever hopeful of getting sun on the KingCat 260 to show off her good looks in the photographs.

Needless to say, Brett and I took the KingCat 260 to sea, leaving Peter, Dustin and Aubrey on the smaller boat to follow us as I put the new craft through her paces. To be honest, I grabbed the much bigger boat for the sake of comfort.

Throughout the test on the KingCat 260, the sea didn’t appear to be that rough, with only a big swell and a small easterly chop starting to cover its surface. However, these conditions seemed very rough when we brought the two craft side-by-side for me to cross over to the smaller 18-footer to photograph the KingCat 260. And it seemed even rougher while racing alongside the bigger craft taking the photographs of her.

There is an old saying in boating — “the bigger the boat, the calmer the sea” — and my experience at sea that day emphasised that point quite dramatically.

So much for size and comfort. So what was the KingCat 260 Sport like out at sea?

To meet Braam Duvenage’s requirements, Peter — in this his first KingCat 260 — opted for a sports version with a centre console helm station for all round fishability. This would also provide protection in big seas by virtue of the fact that the skippering position is further aft. This lessens much of the craft’s movement on the skipper, and with that much bow area forward, it prevents most of the spray that could come aboard in inclement weather.

It was the rationale behind this feature that I did my utmost to prove or disprove as I headed northwards with the swell on the aft starboard beam and the north-east chop on the starboard bow. It’s not the nicest direction to travel at sea, but it is a heading that I know most of the fishing craft take when exiting this port.

After setting her trim and her throttles at 3 800rpm, we cruised up the coast at just on 20 knots in comfort — real comfort. Brett and I were both confused — this boat was riding too well — so I did everything I know to make her ride uncomfortable and throw water.

She wouldn’t lift her bow excessively, no matter how far out I trimmed the pair of 115 hp 4-stroke Yamahas that power this craft, and even when I trimmed them both right in to force her bows to cleave the oncoming sea more deeply, she held both speed and revs. Only then — very occasionally — did she puff a fine spray from her tunnel. And try as I might, I couldn’t get the craft to porpoise.

One has to query why. I firmly believe that it is the modification made to the hull itself which — combined with the craft’s overall length and weight — forces her to ride the sea in what I call her inherent designed ride. By this I mean her designed ride is not substantially affected by trimming the motors or with hydraulic trim-tabs.

As I said, the motor trims only marginally lift or lower her bow.

I tested her running directly into the sea as well as with the big swell, and she rode beautifully. Especially with the lot of boat ahead of me, I fully expected her to appear to dip her bow when running down the face of a big swell. She did not. Even when I was simulating surf work, she seems to hold her stern tucked firmly into the following wave, thus not allowing her bows to dip.

Brett King, who had not skippered this craft previously, also had a full go with her, putting her through her paces with far greater gusto than I did. He voiced his approval, and by his expression — Brett doesn’t talk that much — appeared to be really enjoying his time behind the wheel. 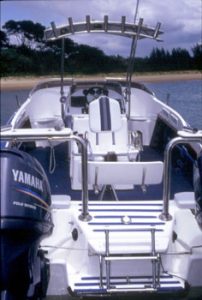 Brett’s own boat is extremely long and therefore he obviously has a hell of a lot more experience of this size craft in surf conditions than I do. He feels that my concern over the apparent lack of power supplied by the twin 115 Yamahas to the KingCat 260 when coming out of a very tight turn was not totally justified.

He is probably right when he says the quietness of the 4-strokes takes away the sound one is so used to when taking tight turns in the surf with 2-strokes, and hence the feeling that the motors are working for their living. This, combined with the fact the motors were swinging 19-pitch props, I believe accounted for my concern. Needless to say, if I was landing at Sodwana, for example, I would at least go down one size in prop pitch to 17s.

The twin Yamaha 115 4-strokes topped out at 5 700 when I was at the helm. This gave the craft a SOG in Richards Bay Harbour of 33 knots and is precisely the reason Peter retained the 19s for this particular craft and its application.

There are a few aspects concerning the craft’s fishability I did not mention earlier — her stability, especially laterally, and her positive forward motion under all sea conditions while at troll, especially while pulling kona’s for marlin. On the drift and during slow trolling she provides a very stable and comfortable fishing platform.

Finally, I trimmed out the motors quite a bit and put them into reverse, using a lot of power. I had her backing up at good speed with very little water boiling over the transom. For an outboard-powered craft, her ability to manoeuvre whilst reversing was fair but adequate.

As Braam Duvenage fishes the full spectrum of fish-availability off that part of our coast, his craft caters for and is laid out deck-wise to accommodate both marlin fishing and bottomfishing. 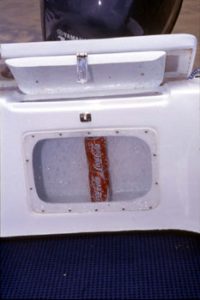 On the marlin side the aft deck is clear to allow for full swing of the fitted fighting chair, and neatly fitted into the false transoms are a pair of Luna Tubes.

The opposite side of this false transom is an “aquarium” for livebait while game- or bottomfishing. It is supplied by copious quantities of water from the same pump that is used to supply the Luna Tubes. A flick of a valve diverts the flow to either the tubes or the livebait well.

Forward of the fishing deck is a comfortable seat and backrest that supports the skipper’s bum seat. It’s a design that Peter has perfected and is liked by a lot of skippers who have used them.

The skipper’s domain, the helm station, is extremely well-designed, incorporating much of what Peter has perfected in a similar layout on his own KingCat 226. I personally found it a very comfortable area from which to skipper this craft, with the steering and controls nicely placed and all the necessary instrumentation both accessible and fully visible.

In front of this craft’s centre console is what they call in home-decorating circles “a conversation pit”, the best seat being the one with a fully upholstered back directly in front of the main console and under the substantial T-top. The other seats follow the curve of the foredeck area, providing comfortable lounging seating away from the fishing activity.

There are cupboards, hatches and built-in coolboxes situated all over this boat, providing more than sufficient stowage than can be necessary for any fishing craft. The entire layout is very neatly thought out and extremely practical in application.

Above all, I liked the space provided to walk around this craft. Whether one is fighting a fish or moving from forward to the fishing deck area, there is more than adequate room, even if one has to move past a fellow angler. 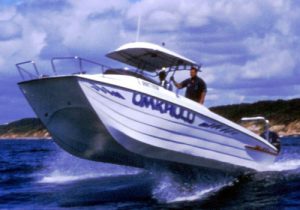 The crew at Z-Craft are producing very fine craft, and their latest KingCat 260 Sport is a magnificent example of their continuing striving for perfection in both construction and finish. I have a personal obsession in the area of small craft finishes and therefore spent a lot of time studying this aspect. She is a very fine craft indeed.

A hardtop version of the KingCat 260 — for those who desire the additional comforts of a full cabin — is in production and I look forward to seeing her on the water.

I believe this trailerable craft tops the practical limit of trailerability with a normal 4×4. I’m sure she will provide flexibility to the deep sea angler who wants safety and comfort in a craft that’s much, much more — and that much bigger — than a conventional ski-boat.