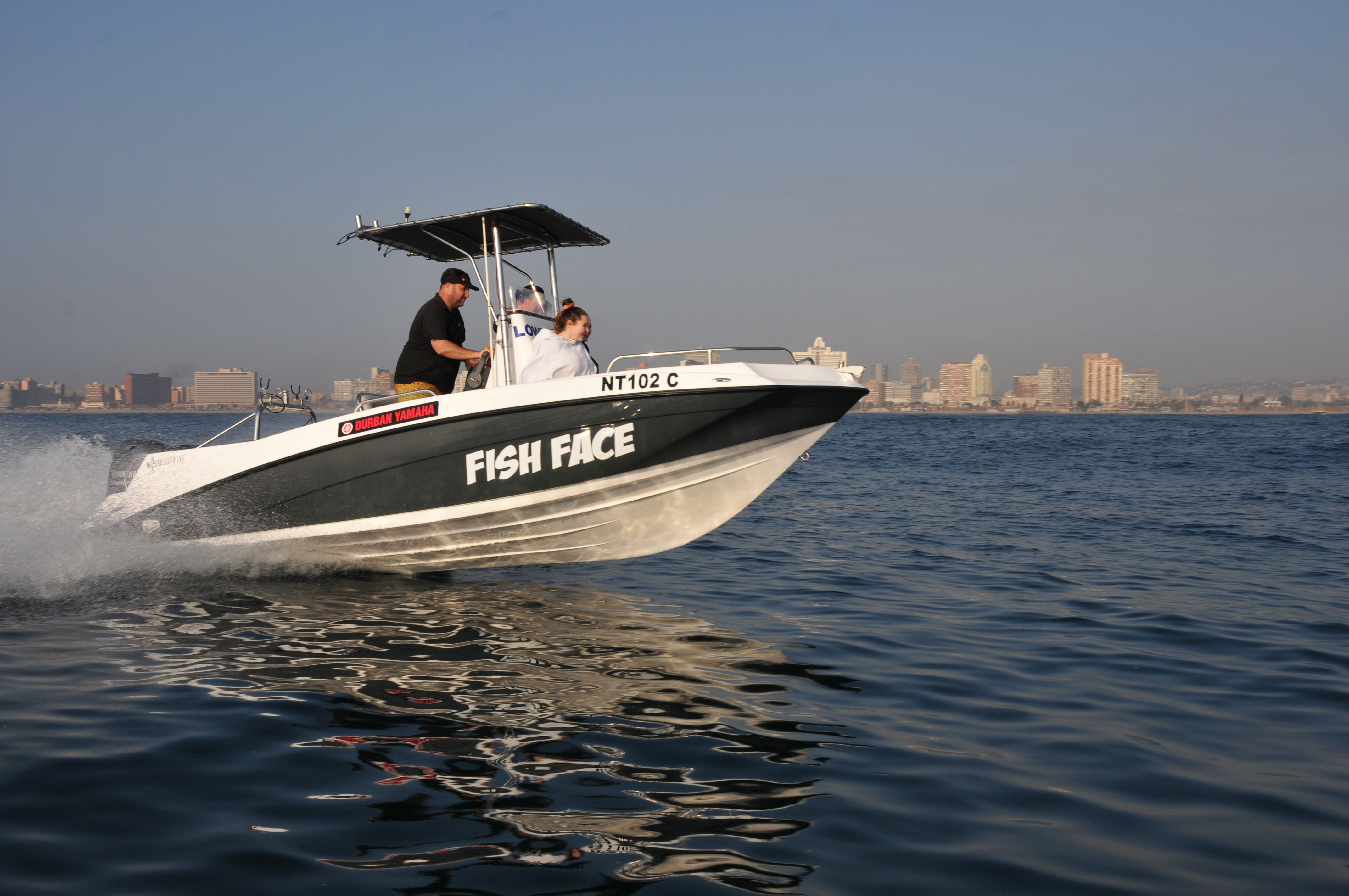 I WILL be bold enough to state that the Yamaha Explorer range of ski-boats has become a trendsetter, bringing the monohulled style of 19 foot offshore sport angling craft back into the South African market after quite a number of years where catamaran-styled craft have enjoyed a strong dominance. This is an upgraded and restyled Explorer from the original Explorer built by Grantley Read in about 2010, if my memory serves me correctly, as a 5.1m (16’7”) craft, and upgraded to 19 foot in early 2017. (see the May/June 2017 issue of SKI-BOAT and the review by Heinrich Klein).

The boat has become extremely popular as a medium-sized offshore craft built for the South African market. The Explorer Evo named Fish Face that Ryan Hansen of Durban Yamaha had completed, powered and rigged, is not only the latest in this range of craft to be built, but was also immaculately finished to perfection for her fastidious owners. It was an absolute pleasure to get to review her off Durban in early September 2020. Before getting into the detail of my impressions of the craft, I need to highlight a few aspects that I noticed and these stem from what I call the resurgence of the monohull craft. Until recently I was a steadfast mono man, despite about three decades of experiencing the strong trend towards the catamaran or twin-hulled craft. Eventually I succumbed and in 2011 I acquired a cat in this mid-range class, but I still love the look and feel of a monohull.

Looking at her as she arrived at the Natal Deep Sea Rod and Reel Club slipway behind Ryan’s Land Cruiser and seeing her glide into the waters of Durban harbour, I could not be anything but beguiled at her overall presence and beauty. Out off Durban’s beachfront in a sea that had been hammered by a south-westerly buster, followed by 18 hours of gale force north-easterly gusting to 30 knots, the water was totally churned up, even though the wind during the morning of the review was but a light to moderate north-easterly. Not totally ideal weather and sea conditions for reviewing a craft of this size, but as we offshore anglers all know, there are times, especially during competitions, when we have to take whatever sea conditions are prevailing. This was one of those days and I was pleased to be on the monohulled Explorer Evo 19. 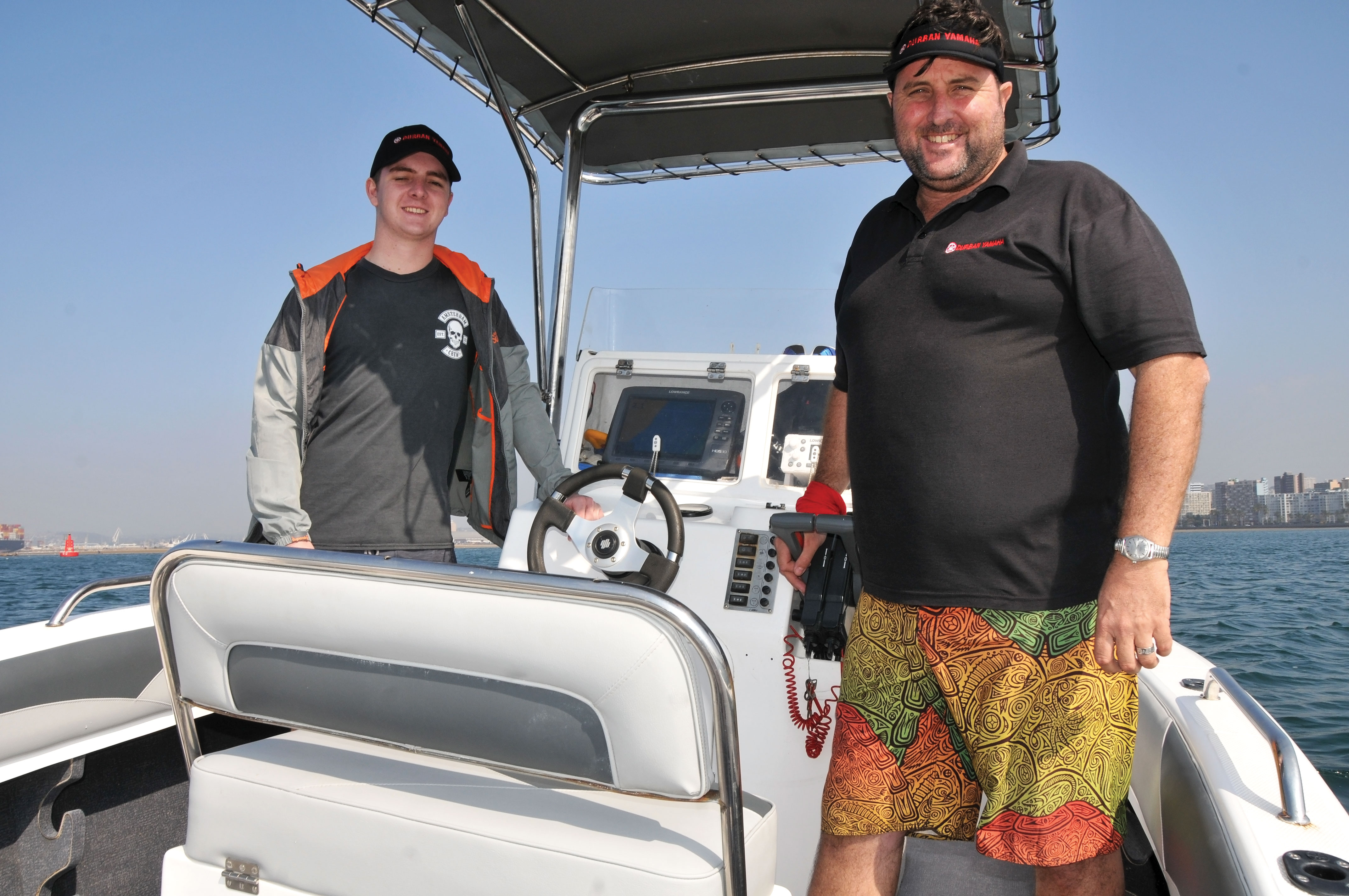 _Grantley Read is arguably the biggest builder of small- to medium-sized offshore craft in South Africa. Regular readers would have noticed in the September October issue of SKI-BOAT that he launched the SeaCat 800 cabin boat named Basjan, which I reviewed. Yes, Grantley is getting very close to the nine metre class that has, for some years now, become the benchmark among the marlin hunters in South Africa. I eventually boarded the Explorer Evo 19 after spending a good hour photographing her while Ryan modelled this beauty for the camera. Watching her as she took on the unsettled sea provided me with a great deal of visual information regarding her performance, and the resultant photographs gave me an up-close view of how she cleaved the water and dispersed the resultant spray from her aft chine region. This also provided me with advanced knowledge for when I eventually took over her helm and physically put her through her paces.

Beauty might be in the eye of the beholder, but I defy anyone viewing the main photograph of this monohull streaking across the ocean surface not to be smitten by her looks. Thereafter it was my turn to board her and take control, satisfying my need to physically experience the craft’s performance on the water. 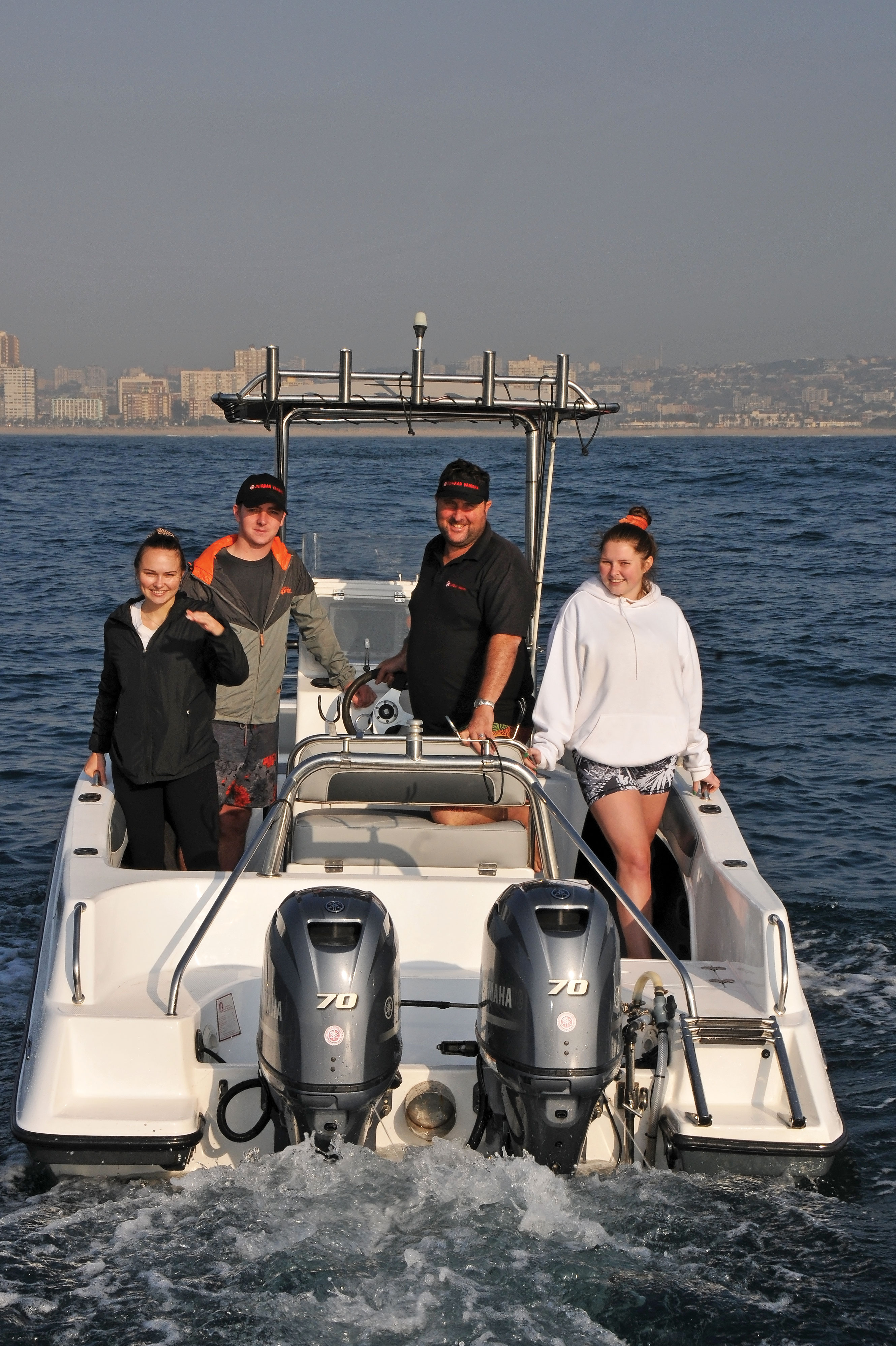 Powered by twin F70hp Yamaha four-stroke motors swinging 15 pitch props, this 19 foot monohull with its centre console configuration put on a very impressive performance. It’s even more impressive when one takes into account the 70hp motors, when one would generally expect a pair of 100hp motors would be more appropriate for a craft of this size. Was she underpowered with the three of us onboard during the review? No. That was my considered opinion, but to double check I asked Mark de la Hey, who uses the craft extensively off the beach with a crew of four or five persons aboard. His response was that even in big surf conditions off Umkomaas where on a recent occasion he spent a long time searching for a break in the backline, he felt no need for more power. “I had all the power I needed,” were his words. In my simulation in the big swell off the Kinmount Bank I did everything I could think of to access the torque and out-the-hole performance and was equally as satisfied. I never for a moment consider these simulated exercises to be the same as actually being in a big surf, and place great credence in Mark’s opinion. I did notice, however, that throughout the review the RPM required to obtain specific SOW speeds was higher than I’m used to. 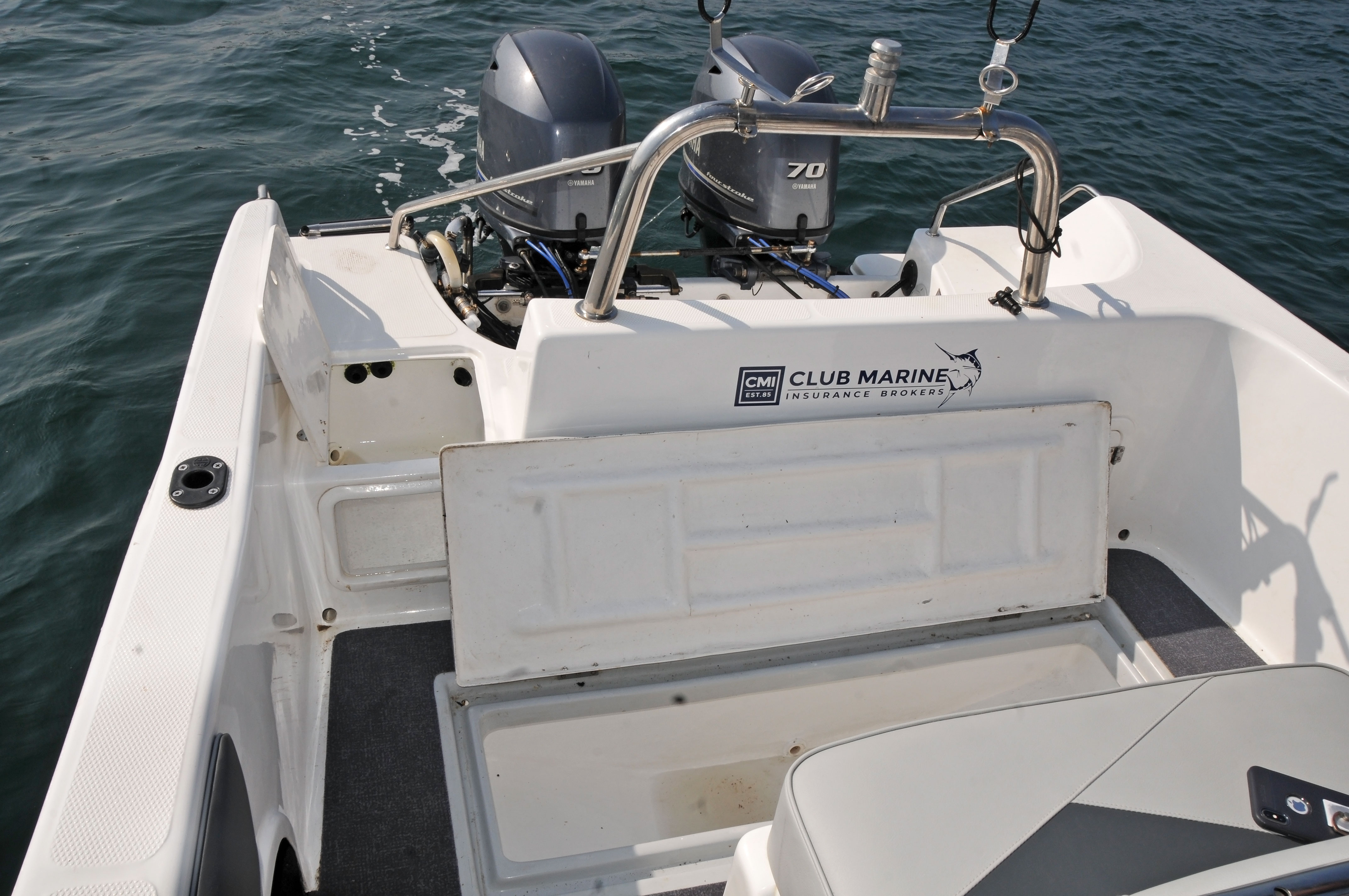 For example, I would have expected an RPM of 3 800 while running at 20 knots, whereas to run at a sustained speed on a course towards Umhlanga Rocks the motors we were revving 4 300 My preferred speed for getting to one’s destination quickly and practically while and at the same time enjoying the ride, is 17- to 20 knots. What’s more, it is also a sweet speed for economic fuel consumption. Talking of which, Mark says in his experience the fuel consumption on this craft with the twin 70s is at least 20% less than on a similar craft with, say, 100hp motors. Back to the test, I set Fish Face on a north-westerly course with the north-easterly moderate chop on her starboard bow in a sea that was still lumpy. A reasonable swell was wrapping around the Bluff from the south-east. Not ideal, as I have stated, but while getting her feel and correct trim settings I got her on to the plane at about 14 knots and then edged her up to 20 knots to experience how her monohull was working the ocean surface. It’s very interesting when one adjusts the bow-up and down trim position while maintaining the same throttle setting. By doing this and adding lateral stability trimming, one can arrive at a situation where one gets to a “sweet spot” and the boat provides all aboard with the maximum comfort.

Deep off Glenashley I peeled off to starboard, as if heading straight out to sea. To retain the comfort I wanted I had to reduce speed a bit and reset her trimming and at 17 knots acquired the comfort I required. More important than straight running, I put her through a number of figure-of-eight tracks to see how she reacted to speeds from slow troll up to seven knots. By doing this I could get both the craft’s reaction to the total exposure of all the prevailing sea conditions, and judge her wake for trailing plastic at between 5.5 and seven knots. Being a mono, I found she pushed a very tight wake that only seemed to spread out at about eight knots. Under the prevailing conditions I didn’t experience the dreaded wind-driven spray when trolling in a beam sea. She tends to throw chine spray from about midships aftwards, and in strong winds there may be a need for the crew sitting aft to wear wet weather gear. The question always asked when running a monohull in a big following sea is: “Does she yaw?” The swell and wind combination wasn’t sufficient to test this aspect, but I feel that with crew weight distributed aft and the motors trimmed bow up, she would use her substantial planing straiks and the softening of her deep vee at the point just forward of the centre console to minimize yawing. 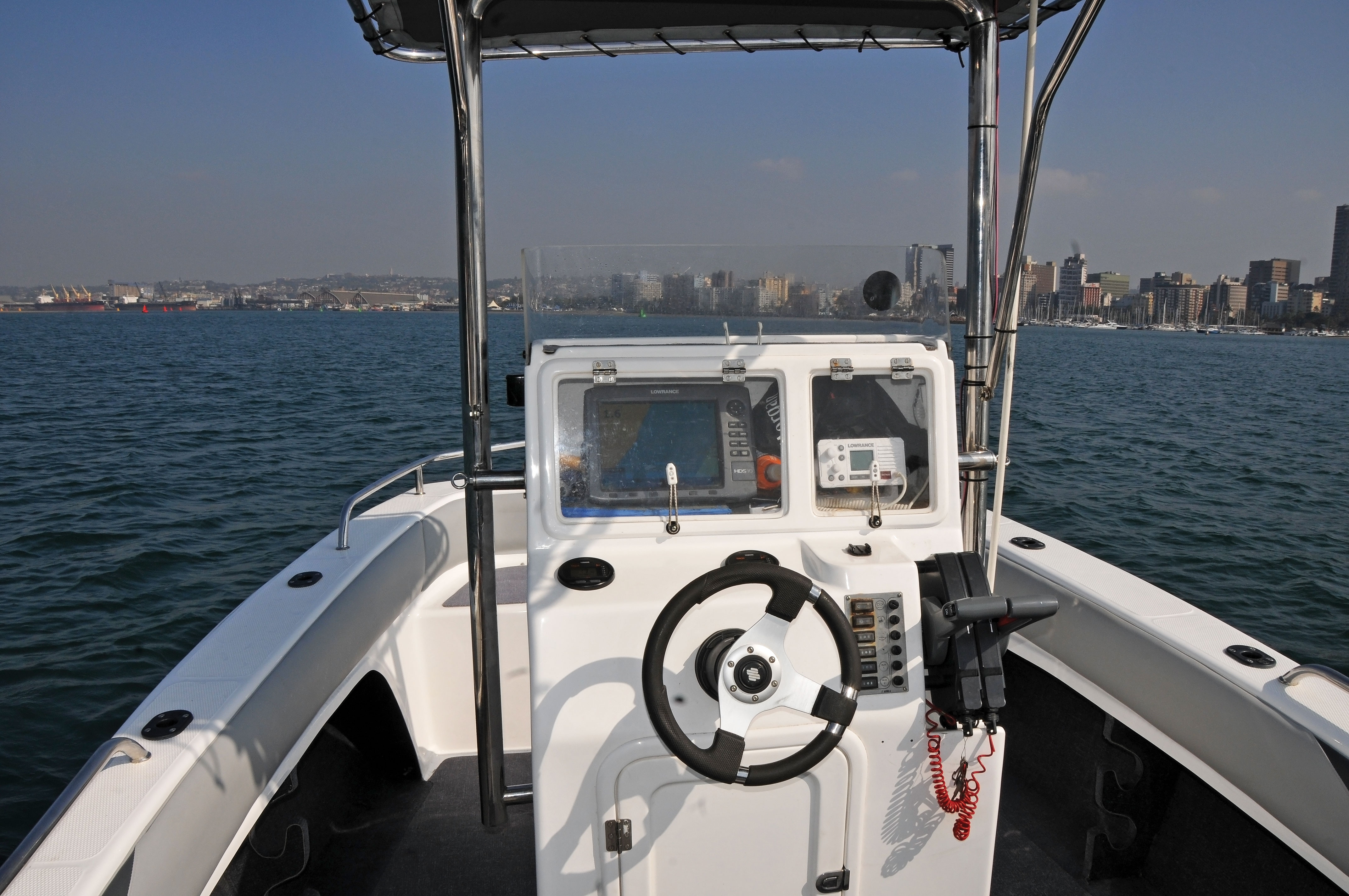 All in all, I enjoyed her overall ride and must give both Grantley and Ryan a lot of praise for producing a craft that rides and performs so well. Over the last four years, practical use and owner requirements have fine-tuned the deck layout of this craft. And I feel that, if possible, it is now ideally set up to suit the vast majority of applications this craft can be used for. For everything from jigging and game fishing to trolling for billfish, the Explorer Evo 19 is a craft in her class that really needs to be seriously looked at.

As I mentioned, this boat has been continuously upgraded over the last few years, and I’ve witnessed the changes and appreciated how these improvements have enhanced the craft’s usability. A centre console configuration inevitably requires practical adjustments over and above those required in a forward console craft. It’s all about the correct siting of the console itself along with all the lockers and hatches required on a sportfishing craft. The helmstation itself provides the skipper with both a perfectly designed “pulpit” to work from and allows the crew adequate space to stand next to the skipper when travelling, and the walkaround ability many like to have when fishing.

As I intimated, practical use of the craft and has led to fine-tuned hatch sizes and positioning to not only maximise space, but also allow for effective use while actually fishing. An example of this is having the large fish hatch situated laterally aft of the rear seat and ahead of the transom. This latter feature is contrary to what we have become used to where the hatch is sited longitudally which has become a necessity because of the twin hull sponsons. Having a personal preference for a forward console when it comes to offshore fishing, especially when billfishing, I hope to see a forward console model in the near future. In final summation, I believe the Explorer Evo 19 is a very efficient hull considering her overall size and power requirement as well as the on-sea comfort of its ride. It is also an example of how the builders and purveyors of this craft have bent over backwards to fine-tune its on-water performance as well as fishability. She’s well worth a second look if you’re in the market for an offshore fishing craft.