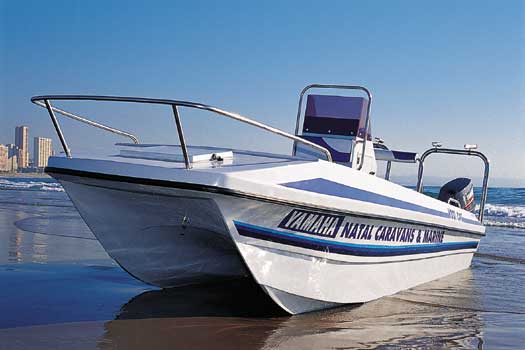 Expertise, service and backup are the cornerstones on which Brian Curtis has based his very successful caravan and outdoor equipment business which he has built on over many years. When he was persuaded to add a marine division to this business just over three years ago, he was adamant that this philosophy had to be the primary thrust to carve a strong niche in the South African boating market. The results have proved him right, enabling Natal Caravans & Marine to command a major ranking in the marine world.

It was, therefore, not surprising that when it came to the testing of their new Kosi Cat, the first one on the beach to oversee the trials was the bossman himself, Brian Curtis.

The 5m Kosi Cat has been designed and built with a specific purpose in mind, says Marine Manager Bill Harrison. They believe the Kosi Cat is an affordable craft of reasonable size which has many uses, aside from offshore fishing. A young family acquiring this craft is assured of many, many years of varied boating experiences and loads of fun.

General Impressions
Some months ago Bill informed me that he intended having a craft built to the specific requirements of Natal Caravans & Marine, and when I first saw her on the beach at Vetch’s Pier, Durban, she looked neat and sparkling on her galvanised breakneck trailer.

The Kosi Cat is a 16ft (5m) craft, and whilst boasting substantial deck and fishing space, she is not bulky or heavy in design, thereby making it obvious that she would not require a lot of manpower or horsepower to operate.

Conditions for test
The coldest week of the year had been and gone and the effects of the strong south-westerly which had passed through were still very prevalent, but it was topped by the chop of a north-easter the day before the test. Indeed, the start of a heavy north-easter greeted us on the morning of the test.

Launching and trailering.
Experience earned with age has taught me a few tricks. Using Brian’s boat for photography purposes, Bill and Colin Nel launched us. Then we watched them launch the Kosi Cat.

The boat was deposited in the small surge/shore break using their 4×4, and within seconds Colin had single-handedly turned the craft to face the surf, even before Bill had completely removed the trailer from the water’s edge.

I recalled this observation when we eventually beached the craft after the test. Because of a long, shallow bank, I did not drive her far enough up the beach to be high and dry. However, her wide aft sponsons gave her a lot of aft flotation which showed when the surge pushed water against her transom and into the tunnel. We manoeuvred her easily into position for the trailer to load her.

Retrailering the Kosi Cat was effortless: 4×4 power, a good Warn winch and a very efficient trailer took all the PT out of an exercise that can ruin a friendship — or a good day’s fishing. 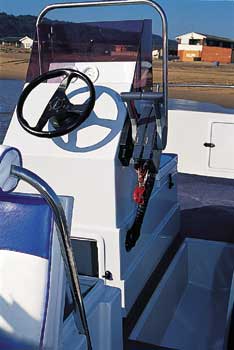 Motors and controls
Natal Caravans & Marine is a major Yamaha dealer in Natal and so, not surprisingly, had a pair of 50hp Yamaha motors fitted to the Kosi Cat.

Watching her during the photo session and seeing the way she reacted and launched herself “out of hole” on takeoff, I felt that these motors were supplying more than adequate power for the craft. When I got onto the craft myself, I was furthermore convinced that going down to a pair of 40hp motors would have been more than sufficient for the Kosi Cat 16. After testing the boat I am still of that opinion.

In order to curtail costs, a push-pull steering system has been fitted which proved totally adequate for the purpose and was smooth throughout the entire test, including during extremely tight turns.

Without doubt the motor controls produced these days are excellent, practical to use and smooth to operate. It’s the fitting of them that often causes problems. The controls on this boat have been well positioned and the cables run in such a way that they don’t restrict any operations.

Handling
When my turn came to take control of the Kosi Cat 16, I believe I had a fair idea of what to expect in the way of performance as I had watched for over an hour while Bill Harrison had put her through her paces for the cameras.

Over the years I have slowly come to the conclusion that watching a craft at sea from every conceivable angle is almost as important as riding the craft herself. Then, after the test, I have the opportunity of reliving the entire experience when viewing the dozens of photographs taken. The ability to carefully study the hull’s over-the-water performance is a very important part of arriving at a full, fair appraisal of the craft and her sea-keeping abilities.

However, this aside and apart from the thrill I still get skippering a new craft, the actual feel of the craft beneath me at sea is naturally of paramount importance to the outcome of the boat test. 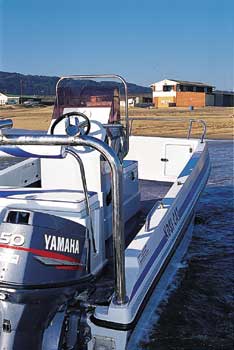 I boarded the Kosi Cat way out at sea and decided to run her towards the old whaling station with the wind on her port stern quarter. It was a long run in what was virtually a following sea, and with the throttles set at 3 800rpm, the 50 hp Yamahas purred as we rode very comfortably with Bill sitting ahead of the console on the “crew seat”. When I pushed the revs up to about 4 500, the twin hulls started to work the sea a little harder and Bill had to stand next to the centre console where he had a substantial handrail to hold onto.

The extra speed was lifting her bow a little high, and as the motor had no power trim, I could not balance speed with the craft’s ride over the water. In the end we manually dropped the trim pins one hole, thereby getting her to ride marginally lower in the bow. The difference in ride was very apparent, especially when we turned and rode into the easterly chop. It was a vast improvement in speed as well as comfort.

Staying on the subject of trim, whilst in the trimmed-in position she turned very tightly and I took her into the heavy surf area off Cave Rock with no qualms about her ability in the surf. She pulled out of the turn and — with the vast amount of thrust from the twin 50 Yamahas — she jumped out of the hole to take whatever was coming at us.

The only difference I noted was that the steering became a little stiffer in the bow-down position. This would not have been noticeable had the craft been equipped with hydraulic steering.
However, it was also interesting to note the difference later when we re-enacted surf work in the swell building up over Limestone Reef, using both trim positions. At the trimmed-out position she was easier to turn, but was slower out of the hole and had a bit more bow lift when attacking oncoming waves.

Balancing boat design and motor settings is a series of compromises, and on small boats these are more apparent.

A lot of time was spent running the Kosi Cat in what I call “simulated fishing conditions” — slow troll and fast troll being the two critical aspects in a craft of this size. At slow troll she was not being seriously pushed off course by wind or chop, and she was very stable. During fast troll — rapala speed — in the conditions that prevailed on the day of the test, she did not thump and nor did she throw water at us from the sides or over the front.

Overall, I enjoyed skippering this craft and consider her performance more than adequate for general offshore fishing.

Deck layout
The first impression I got after boarding the Kosi Cat 16 was the actual deck area for a craft of this size — it makes for a lot of fishing space. If you combine this with the positioning and size of the centre console and the combination of seating and above-deck hatches, you have a good, practical setup. It’s one in which the crew can move about while fighting a fish, or get to a rod when the reel screams, or even just move about easily during a day at sea.

The design is quite simple in overall concept, yet it has proved very practical over a number of years. The only hatches in the sponsons are the two good-sized fish hatches, one in each sponson, both with postbox hatch covers to simplify the loading of fish. One could be used as a livebait well until such time as the hatch space is needed for fish.

Above-deck storage is in the skipper’s tram-style seat, in the confines of the centre console, in a fuel hatch under the front hatch, and in the two hatches in the forward bow area. A new idea they’ve come up with is having three small hatches in the internal face of the gunnel combings. This utilises wasted space and is practical for storing small, often used items. 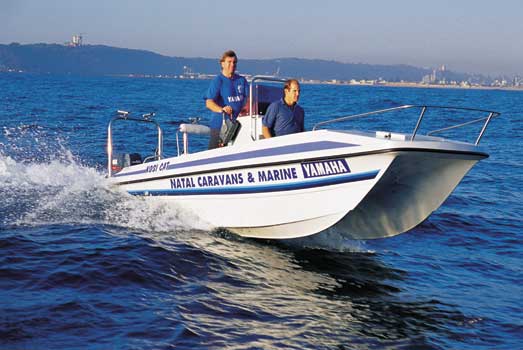 Finish
I have always said that finish is largely proportional to price, but in saying that, I was rather surprised at the high quality of finish and the extras that Natal Caravans & Marine have included in the Kosi Cat 16 at the price they are selling this rig for.

It is a craft one could hitch up off the showroom floor, tow away and head for the launch site — and feel very proud of one’s new acquisition. The overall impression gained during the test was that she is solidly constructed and the hardware and extras have been neatly fitted. Where necessary, these are substantial.

Conclusion
The Kosi Cat 16 is a practical fishing craft that will suit a wider range of potential users than only entry-level or first-time boat buyers. For any offshore angler — especially one using a craft for flyfishing — who wants a boat which is easy to handle and tow, yet capable of withstanding fairly rough sea conditions, this is the one you should be looking at.

In addition, she’s practical enough in overall size to take to dams for a day’s family fun boating or bass fishing, or indeed for fishing estuaries, bays and rivers. In fact, the Kosi Cat derives her name from Kosi Bay, because it was on these waters — Brian’s favourite fishing venue — that the idea for this craft was conceived. The Kosi Cat 16 has certainly fulfilled his expectations.