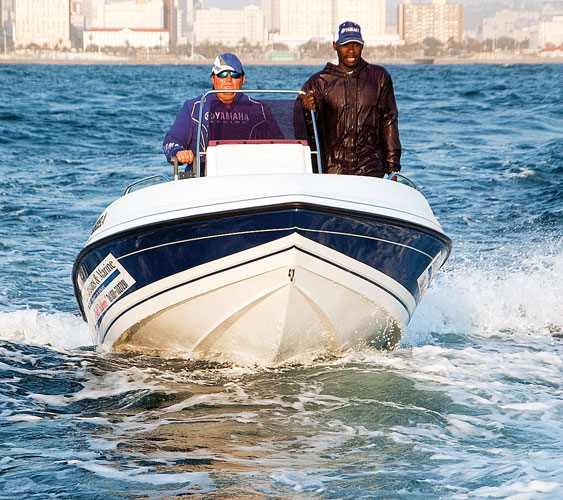 IT wasn’t that long ago that I tested the Benguela 1450, so I was quite surprised to receive a call from Bill Harrison from Natal Caravans and Marine asking me to put the all new Benguela 1650 monohull through her paces. Initially I was under the impression that she was the 1450 fitted with two engines instead of one, but when I met with Bill at Natal Rod and Reel Club on Durban bay to test the boat, I saw that she was actually bigger than the 1450.
My first impression was that this was a plain but neat little boat, fitted with twin 40hp motors. The idea of getting wet so early morning — and with my camera on board — was not enticing, so I decided that I would leave this boat for last. That way if I did get wet I could come straight back after the test and change into dry clothes.
Fortunately, my fears were totally unfounded.

WEATHER CONDITIONS
Although we’d had a lot of rain in late August, the weather had cleared up by the day of the test, Wednesday 27th, and it was a bright, sunny morning.
There wasn’t much wind in the harbour confines, but conditions changed as soon as we exited the harbour mouth. The northeaster that was blowing created a washing machine swell that made testing very easy, but taking photos very difficult. 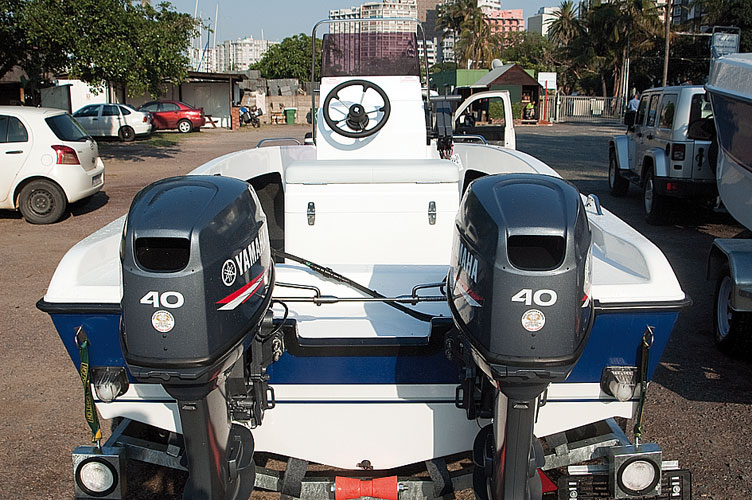 LAUNCHING AND TRAILERING
The Benguela 1650 comes on a single-axle braked breakneck trailer that makes towing, launching and loading easy. Towing her through the traffic and on the open road was very simple. This is not a very high boat so she doesn’t catch a lot of wind and it doesn’t swing around behind the car.
As she’s such a lightweight craft and the trailer is braked, the whole rig is much easier to control. The brakes helps to keep the trailer straight when slowing down which obviously help to slow the towing vehicle, thus avoiding the pushing effect.
Launching in the harbour is also very easy as the trailer is custom-made: the boat slid off very easily. When loading, if you are not comfortable driving her up on to the trailer, the hand winch makes easy work of retrailering her.

MOTORS AND CONTROLS
This particular test model was fitted with 2 x 40hp two-stroke Yamaha motors with normal sidemount cable controls. In this case there was no doubt that the motors were more than big enough for the boat. 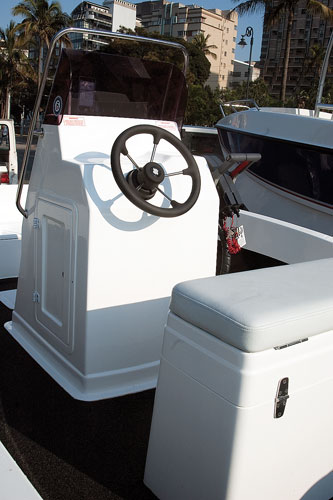 PERFORMANCE
The Benguela 1650’s performance made me regret doubting her earlier. All my fears of getting wet went out the window when I moved in behind the controls. The only time I got wet was when I hit a swell a bit too hard and the light spray from the wind caught me on the side — not even enough to get me properly wet, though.
Although there were three of us on the boat while I tested her, she had no problem jumping out the hole and onto the plane in a flash. In fact, she got up so fast that I had to tap down on the throttle.
Cavitation did not feature at all, even in the rough seas we were playing in, and on sharp turns she would outperform a lot of other boats I’ve tested. Running with the swell she did not show any signs of broaching. As for running into the swell, here it’s up to the skipper to control the boat and to run her without pounding.
Bear in mind that this Benguela 1650 is a small, nifty boat and is light, so if you are going to drive like a racing driver then expect to be airborne a lot. Be a responsible skipper and make sure you don’t hurt your crew.
I was very impressed with the Benguela 1650 when we were running with a side-on swell — although she is a deep-vee mono, she handles a side swell with ease. The performance of this boat can be rated much better than a lot of bigger craft, but I would not recommend taking her out to sea in a buster of 15-25 knot wind and huge swells. 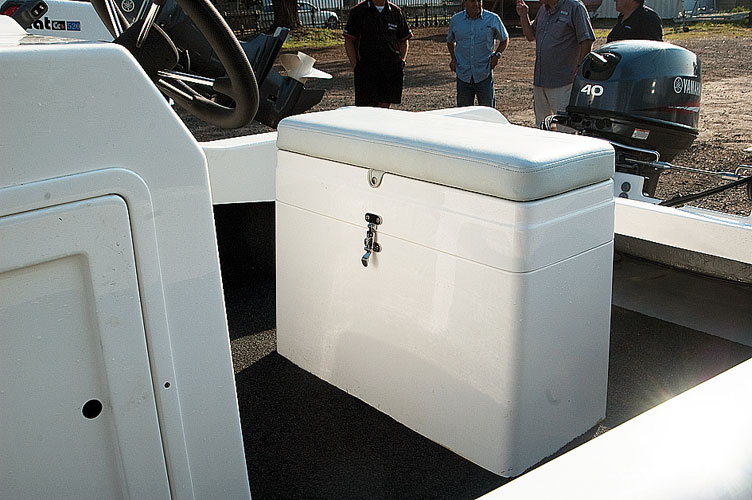 LAYOUT
Starting in the bow there are two stainless-steel bow rails and an anchor hatch with a seat on the inside of the boat. Underneath this seat there is also a storage hatch. The fish hatch is sunk into the deck in the front.
In the centre of the boat there’s the console with an entry door on the left side. Behind the steering there’s a bum box that covers the fuel hatch, and between the fuel hatch and the seat they have fitted a smaller storage hatch — quite a clever idea.
Everything else on this boat is plain and simple because, after all, she is an entry-level craft. The idea is to keep the cost as low as possible, while still giving you the option to rig your boat the way you want it. 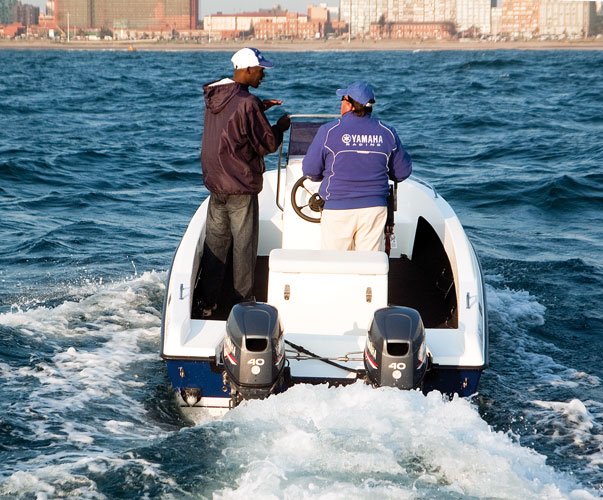 CONCLUSION
Looking at the finish of this Benguela, once again everything is perfectly in its place — the trademark of Austral Marine, the same boat company that builds the Angler range. Personally, I rate their boats as being amongst the best in the market, if not the best, quality- and performance-wise.
Over the past two years we’ve seen Austral Marine launching one boat after another, constantly looking after their customers and trying to outperform the rest in the marketplace.
Times are tough, though, and the petrol price is climbing every month, so this entry-level boat might be just the one for you to look at if you want to get on the water but have a tight budget. The Benguela 1650 should be light on fuel, and seeing that she’s not heavy, it won’t add too much to your vehicle’s fuel bill when you’re towing.
This is not only a perfect boat for offshore, bay and estuary fishing, but two to four people could also enjoy a good day’s fishing on the dam with her. Bill Harrison and his very helpful staff at Natal Caravans and Marine in Pinetown will be happy to help you with any further details.

Benguela 500 by Natal Caravans and Marine