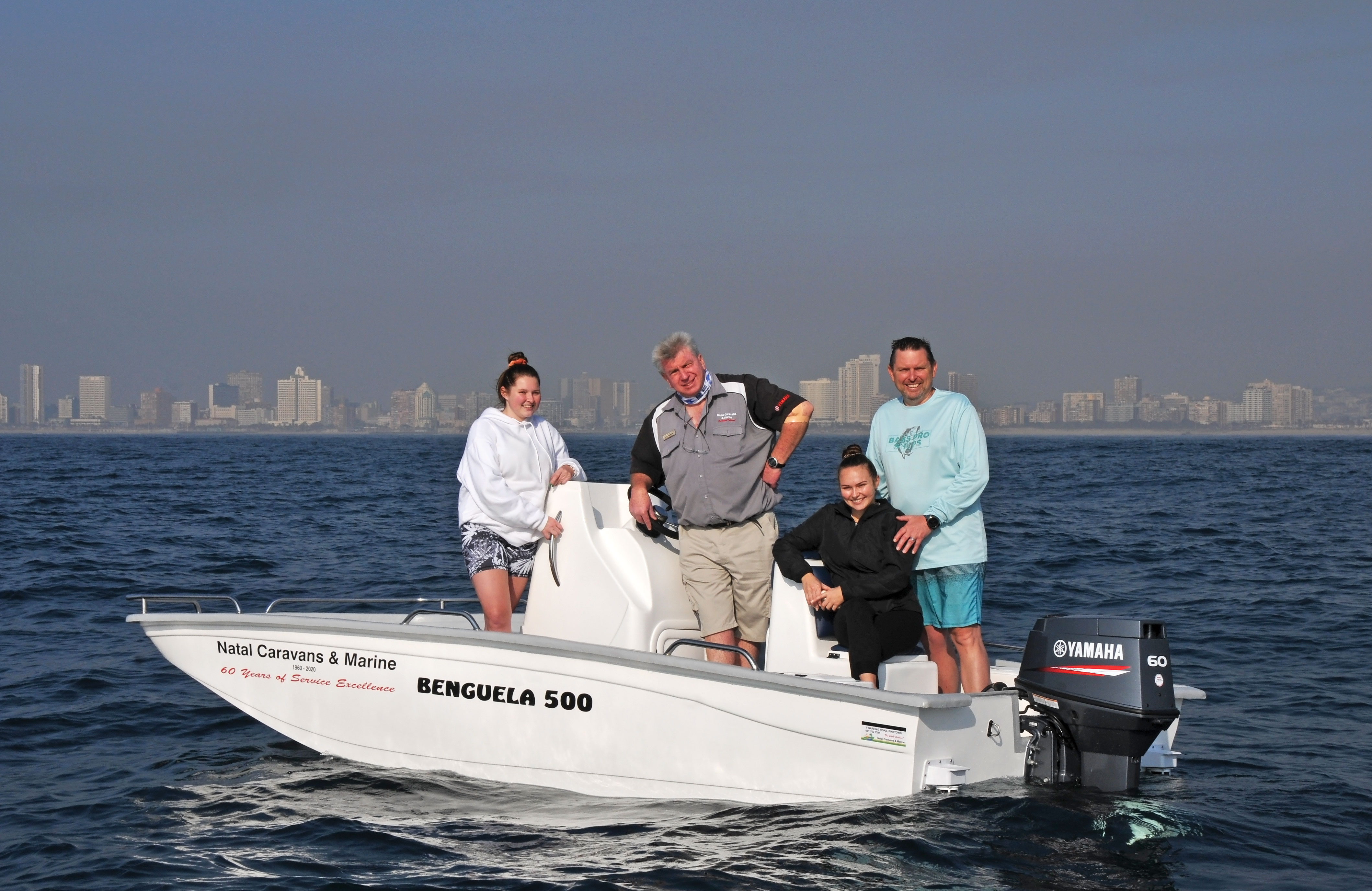 NATAL Caravans and Marine have proved over the 60 years they have been in business that the “beginner in boating” or person just wanting to get on the water is just as important to them as the “big boys” with their large ski-boats. To this end they recently commissioned their major boat manufacturer to get back to basics and build them a five metre craft that was powered by one motor and was capable of going to sea as well as being used on bay, estuary and inland waters with good stability, safety and comfort. Thus the Benguela 500 was conceived and built, and I had the privilege of taking her on her maiden voyage. 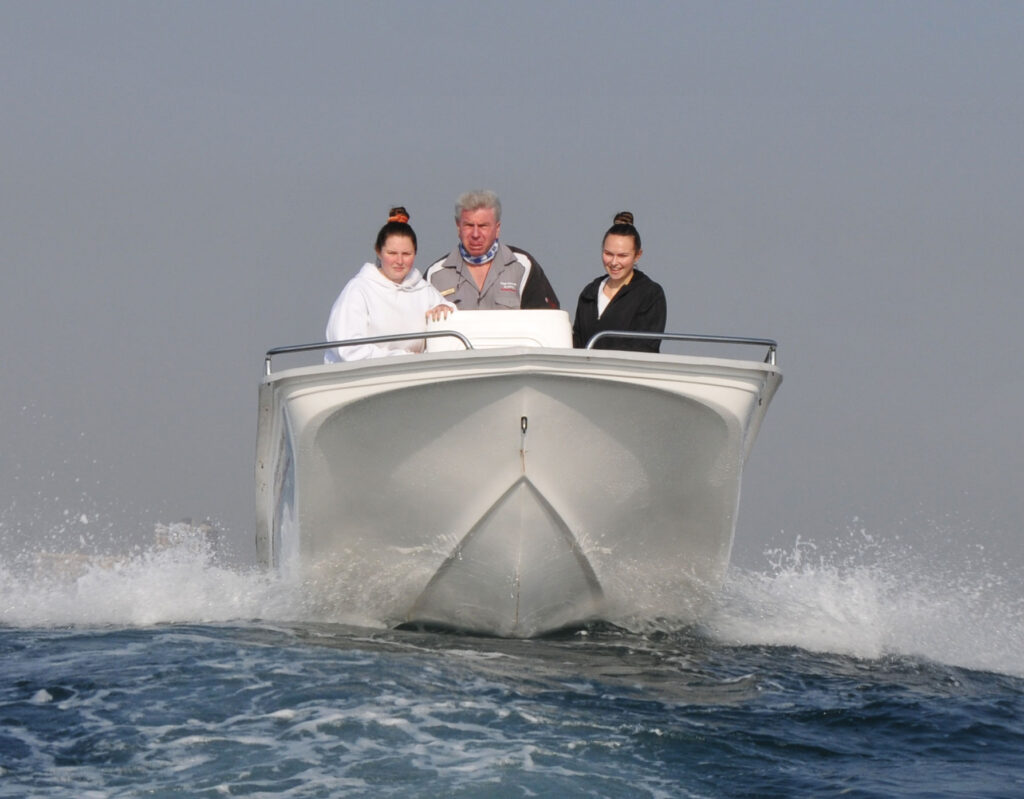 She looked stylish and neat on her trailer, but at first sight when she arrived to be launched into Durban harbour I thought she looked small. However, once I was aboard and heading out towards the harbour entrance I became completely enamoured with the Benguela 500. When we were up on the plane she brought back a flood of memories of how I started with boating on Durban bay and my first ski-boat of virtually identical size on which I started my lifetime involvement in deep sea fishing and boats. Above all, I thoroughly enjoyed the ride. It is essential to expand on the basic design of this craft which in itself is a major reason why I feel this craft not only performed so well in the inclement conditions, but also provided the constant feeling of lateral stability one would not expect from a craft of this overall length and size. Bill Harrison, Natal Caravan’s boating fundi, chose the basic cathedral hull concept for its design and the proven above deck level centre console layout that is so popular for this style of craft, especially among divers. The cathedral hull is, very basically, three longitudinal sections with the central “sponson” doing the initial cleaving of the water’s surface and the two outer sponsons holding in the initial cleaved water, thereby providing lateral stability until the craft’s planing area of the aft section of the hull comes into action and determines her rides. These outer sponsons especially come into play when the craft is at slow troll and drifting, a factor which I’ll embellish on when discussing the craft’s on-water performance.

We called the weather correctly for a change, picking a small gap in the constant spring weather that hammers the KwaZulu-Natal coast during late August and September. Following a south-westerly buster of 30 knots and then a beastly easterly, on the morning of the review we initially had little wind, but there was still a residue of the north-easterly chop and the final remnants of a running swell from the westerly buster. Not the greatest sea for a small boat, but it played a huge part in building my appreciation for what the Benguela 500 can do in such conditions.

This aspect of boating which is so important with a large craft becomes virtually a non-issue when you’re trailering a boat like the Benguela 500. Due to its size, overall weight and the hull’s handling of the tow vehicle’s slipstream while high speed towing, one might well wonder whether there’s a boat behind you at all. In real terms a medium-powered sedan car will be easily capable of towing this rig which weighs about 750kg. The slipway launch and return was a non-event, and I am sure that a beach launch will be equally as easy. 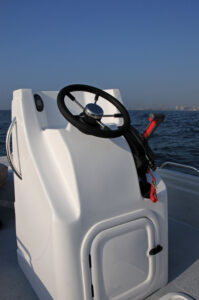 A single 60hp Yamaha two-stroke motor had been chosen to power the Benguela 500. It proved to have more than sufficient power with three of us aboard, with the added bonus that the reduced cost of a two-stroke as opposed to a four-stroke enables Natal Caravans and Marine to offer the rig at a very affordable price in today’s market. Hearing the putt-putt of an idling two-stroke and smelling the aroma of burnt oil that has long been part and parcel of our offshore boating experience brought back still more memories, especially while trolling endlessly on one motor with the wind on the transom. Very lekker indeed. The cable steering and single throttle control module was mounted on the centre console in such a way that I could make throttle adjustments and trim setting changes while holding the steering wheel with my right hand. It was especially nice while trolling at low speed. One 60hp motor — is that sufficient? Well, going back 50 years most ski-boats of this size were powered by a single 40hp motor. In short, this craft was more than adequately powered. Swinging a 13 pitch prop she’s very fast onto the plane in flat water and more than adequate in simulated surf activities, coming out of a sharp about-turn and digging us out of the hole and back onto the plane. So, yes, 60hp was more than adequate for the Benguela 500

Back in the past when 14’ 6”, 15’ and 16’ craft were by far the majority of ski boats sold for use on the South African coast — think of the WASP, Viper, Acecraft, Invader, Kosi-Cat etc — the Benguela 500 would have turned many heads in admiration. I reminded Bill of that when he commented on the Benguela 500’s size while in the northeasterly chop. A few decades back there were many days when the fleet of boats off Durban — this size and smaller, with small five- to 15hp motors — bashed their way back to Vetches when the south-westerly hit us unannounced . Of course there was no Windguru or Windy app in those days! The Benguela 500, with 300kg of man-power adorning the decks, easily slipped onto the plane after exiting the no-wake zone. With her RPM at 3 700 and doing 17 knots we glided across the bay water with ease. It was only once we exited the harbour entrance and felt the effects of the massive easterly the day before that I had to tap off a bit and adjust her trim whilst still on the plane. Once out at sea in open water which resulted in Bill’s remark about small boats in rough weather, I began to carefully evaluate the craft under my control, coupled with the prevailing conditions. I really enjoyed it! There was no feeling of pushing the limits, and I felt very comfortable with her performance, especially her lateral stability. I thus went on to put her through a comprehensive array of on-water manoeuvres to prove her sea-going credentials. This lateral stability is important to note, and a function that most offshore ski boaters don’t come across in a craft’s performance when it’s powered by one centrally positioned outboard power source. These days we take for granted the use of lateral planing support via motor trim on a dual motor installation. With a single motor the only trim is bow up or down, thus negating any assistance with regard to lateral stability. On the Benguela 500 to a large extent its cathedral hull provided that assistance while planing at sea. This I was able to ascertain by moving my crew to various positions on the boat. While heading north at 17 knots with the wind and sea on the starboard bow we made good progress and avoided virtually all the throwback of the bow spray onto any of us aboard. As an aside, when I photographed her from another boat the spray action — or lack thereof — was very noticeable, even when Bill was really pushing her to perform for the camera. Those who remember the surf launches with a single 40hp motor on a 16 foot craft will know it’s crucial to be able to spin a boat around on a tickey in the surf without throwing the “tow rope” crew member who’s calling the shots from his stance up in the bow section. In those day the skipper was seated at the transom, tiller bar in hand, and tight calls, spins and avoiding cavitation were essential. As much fun as it was then, I would hate to do it today. Putting the Benguela 500 through simulated surf conditions, she did well with a limited amount of cavitation when she peaked in the turn before commencing her pulling out of the hole. This was controlled by some nifty throttle work and I was able to get her back into action and over the shoulder of the following wave with time to spare. In the age of the monohull the slimline entry was deemed essential to punch through a foamy or breaking wave during these trials. It was assumed that doing this with a twin-hulled craft — or in this instance a three hulled, three chined craft — would be more difficult, but time has taught us the great benefits of attacking and exiting an oncoming wave at an oblique angle. With me then totally happy with the Benguela 500’s ability, I took her out into the rough water to see how she covered distance in both the head-on sea as well as the following sea, and how she would behave when on slow troll. Without doubt her lateral stability is her key attribute, especially when slow trolling or drifting, as all of us were able to move forward, all aft and to one side or the other without being overcautious about lateral trim. She really was a fun craft to skipper. 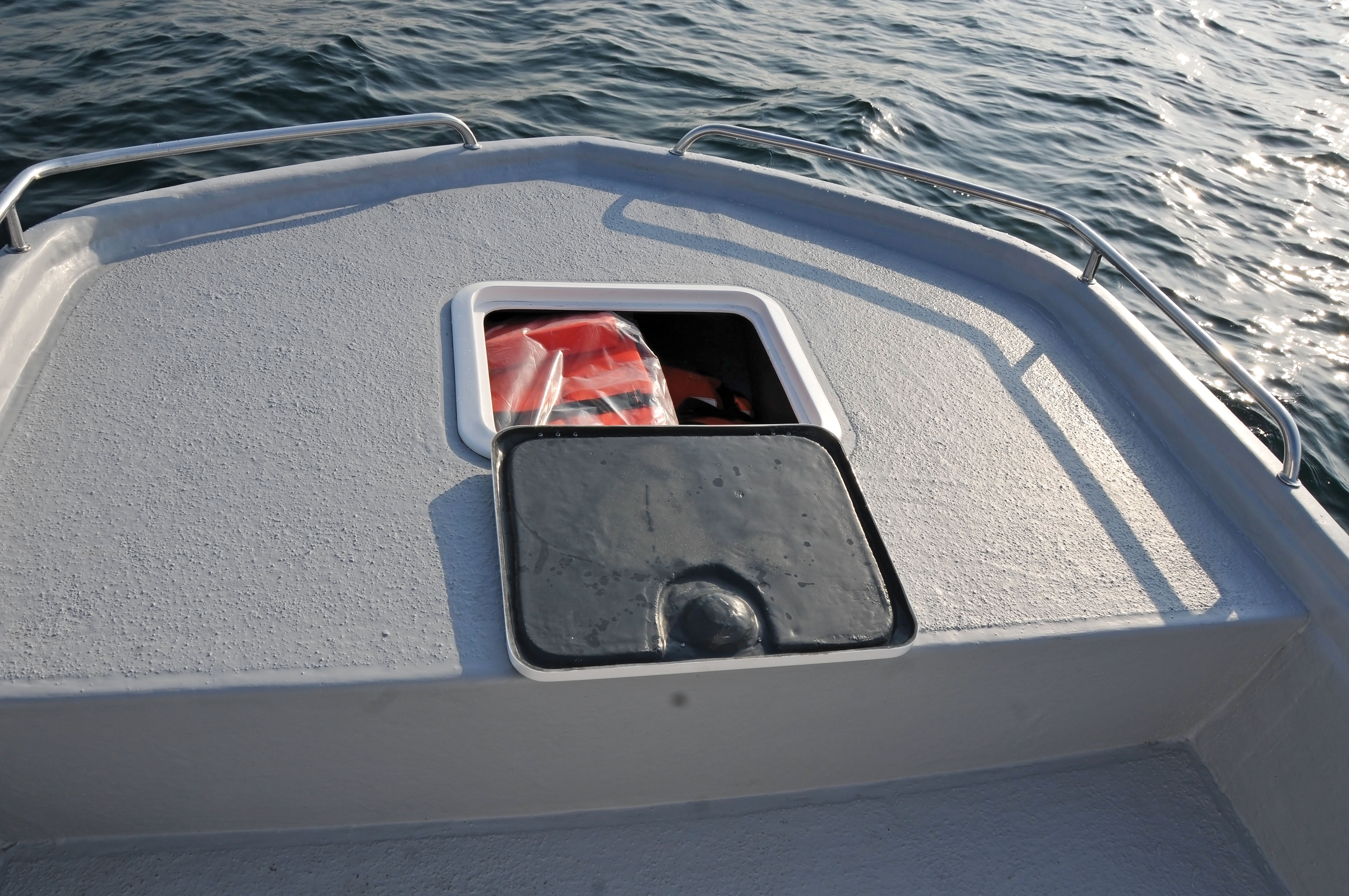 Geoff Courtis, MD of Natal Caravans and Marine, and Bill Harrison have been in the boating business for a long time and know what is required in terms of a boat’s build and finishes to make it the purchaser’s pride and joy. The new Benguela 500 is totally up to spec in this regard. The exterior and moulding of its hull up to gunnel level is solid and well moulded both to physical touch and feel when she is out at sea being thrown around as I did. As with all centre consoles, her deck layout is a combination of compromises to give one the ability to walk around her deck and comfortably command her from behind the helm station. Experience over many years has provided and developed a fairly standard layout that works, and this is true of the Benguela 500 too. I found the helm station very comfortable and the right height and position to skipper this craft. The two crew who were positioned on either side of me found they had sufficient handholds to provide them with a safe ride. Most of us now judge a boat’s layout by what’s available on the much bigger boats and find it incredibly difficult to mentally place all their acquired tackle — essential in their opinion — in the confines of, say, a five metre craft. Realistically, the locker space provided on the Benguela 500 — forward and aft of the centre console — is adequate for its intended use. The accessories may well change though depending on what future owners demand, as both they and Bill establish the specific requirements of those who will be using the craft.

There will no doubt be many slight variations made to the deck of the Benguela 500 because she can be used in so many different applications — fishing out at sea as well as on estuaries and big waterways like Jozini Dam, recreational boating on inland waters, bass fishing and the growing demand for the craft to be used for sightseeing on rivers and dams. Judging by the enjoyment I derived from testing the Benguela 500, I am convinced it will become a very popular craft.