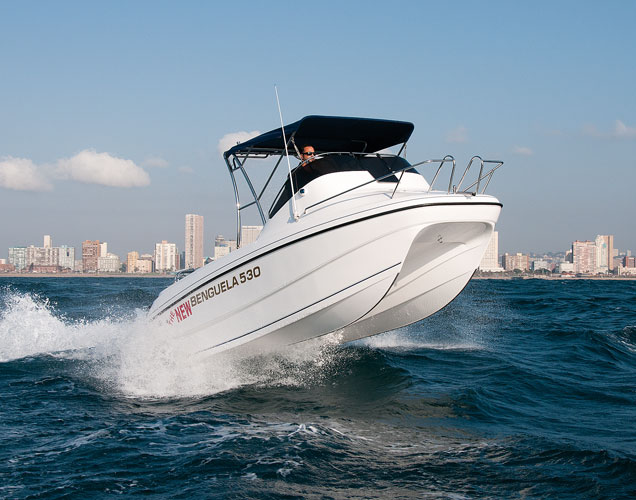 Length – 5.35m
Beam – 2.35m
Approx weight — 840kg
Recommended hp — 2 x 60hp to 2 x 75hp
Rated max hp — 2 x 90hp
Power as tested — 2 x 70hp 4-stroke Suzukis
THIS is the fourth time that I have tested the Benguela 530, but each time it’s been for a different dealer and each time the craft has had different engines propelling her. This time the test was for Nick Landzanakis at Natal Power Boats.
This stunning boat, built by Don Jarrett from Angler Boats, aka Austral Marine, has gone from strength to strength. She has become a very popular craft and has helped establish Don’s name in the deep sea market.

FIRST IMPRESSIONS
As with all the other times I tested this craft, I was keen to go to sea with her. Her quality of workmanship is superb, making for a neat little boat with striking, very modern lines. The stainless-steel T-top fitted to this model gives her a totally different look. 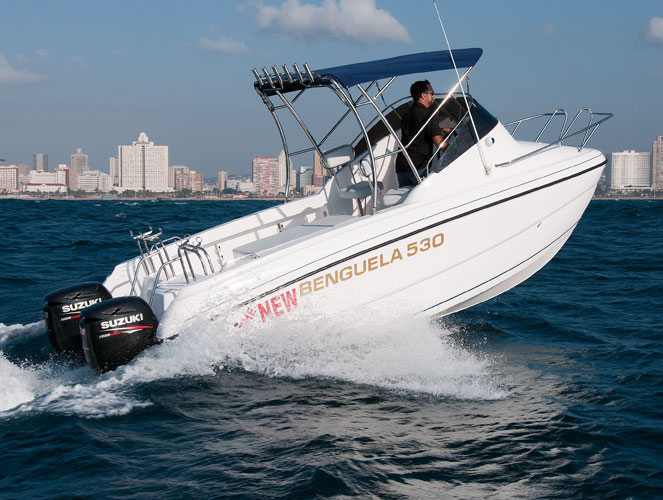 LAUNCHING AND TRAILERING
This must be one of the easiest boats to put in the water and take out again. She is easy to handle both on the beach and on a slipway in the bay. The galvanised single-axle breakneck trailers these boats come on are made in-house by Angler Boats and fit the boat perfectly.
When we towed her back to Natal Power Boats’ premises she felt light behind the bakkie and was easy to tow in traffic. 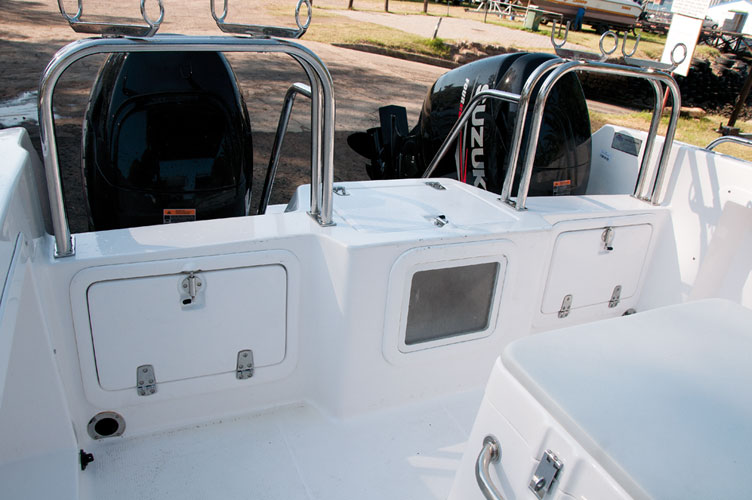 MOTORS AND CONTROLS
This Benguela 530 FC was fitted with twin 70hp 4-stroke Suzuki motors. Seems a bit overpowered? Not at all, and especially not for someone like me who prefers too much power rather than too little. What a combination!
The side-mount cable controls were fitted correctly and were operating very smoothly, both into and out of gear, adding to the enjoyment of having all that power behind me. Indeed, I would definitely recommend these engines for this boat. 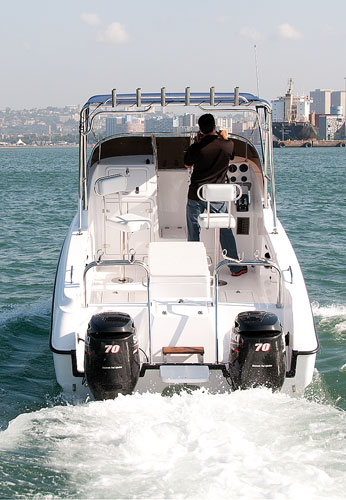 PERFORMANCE
In some ways this boat felt totally different to all the other Benguela 530s I’ve tested. To begin with she was fitted with a stainless-steel T-top which makes a huge difference to the boat’s performance — depending on the weather conditions, of course.
With two 70hp motors she was out the hole in a flash and I actually had to hold back on the throttle because of the poor weather conditions.
With a following sea I had no problem with broaching and I didn’t even have to trim the engines. With engines this size you have to be on the alert when going into the swell. If you accelerate too fast you’ll be airborne most of the time.
There was no pounding that I could report, taking into consideration the weather conditions. In fact, we tested her alongside a much bigger boat and she handled the sea just as well as the bigger boat, if not better. This 17-footer is capable of more than many other boats her size. 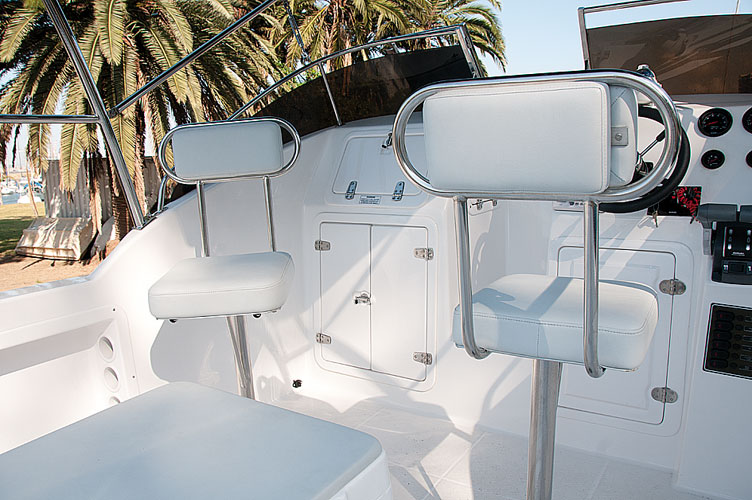 DECK LAYOUT
Starting at the bow, as usual you’ll find the anchor hatch. The console has enough hatches to take all your tackle, and she is fitted with two swivel chairs that are removable if you don’t need them. This Benguela 530 has a fuel hatch in the middle of the boat that also adds extra seating space.
In front of this fuel hatch there’s a smaller storage hatch which can also be used as seating.
At the back of the craft there’s a livewell fitted in one side of the false transom. It has a glass window so that you can easily check to see if your livewell pump is working, as well as monitor your livebait. Battery hatches are also fitted in the false transom.
The fish hatches are situated below the deck on both sides of the craft. With the stainless-steel T-top fitted with rod holders, there’s a lot more open space on the deck and it actually changes the look of the Benguela 530 FC.

CONCLUSION
As I’ve said so many times before, you get what you pay for. This is currently one of the neatest boats in the entry-level market and the quality of this craft is unmatched. She’s a very stable little ski-boat, and I think that Angler Boats have done well for themselves over the last year with their Benguelas, proving to the offshore market that they can compete with the big boys.
Angler Boats’ standards are set very high, and if you want value for money this is definitely one of the boats you should take for a test run.
Nick and his staff at Natal Power Boats are well known in the marketplace, and I’m sure they will be more than eager to help if you give them a shout.