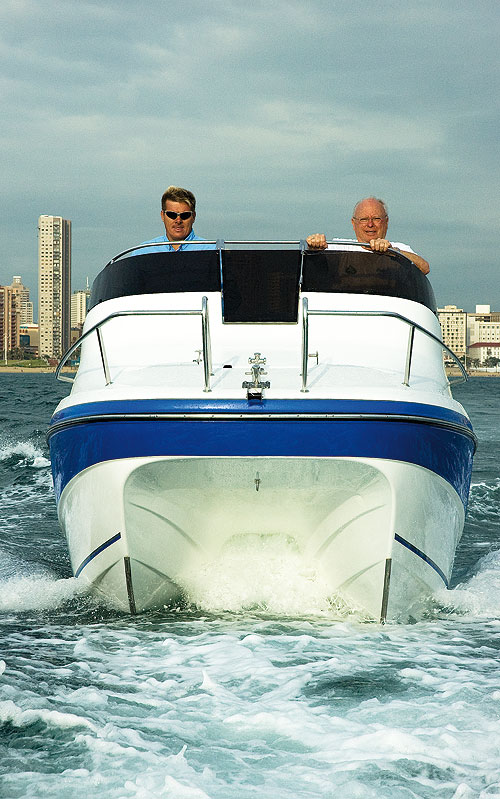 WHEN we tested the first of Don Jarrett’s new offshore boats, we knew there would be more to come — and we didn’t have to wait too long. I recently visited him at his factory so that I could see what he was busy with. Don proudly showed us the follow-up model of the Benguela — the forward console model — which was still in the developmental stage.
Let me tell you, if you ever want to see a boat building company that takes pride in what it does, visit this factory. You’ll be very impressed.
A few weeks later I got a call to say the Benguela 530 forward console was ready to be tested, so we set a date to meet at the Rod and Reel Club on Durban harbour. 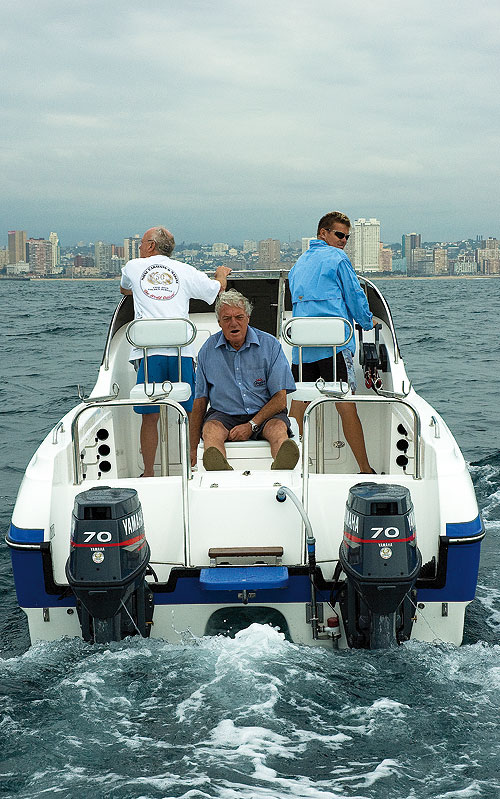 GENERAL IMPRESSIONS
Since I’d already tested the Benguela centre console model, I thought I knew what to expect with her forward console sister, but I was totally wrong. This boat was something totally new and exciting.
When I saw her waiting for me at the slipway, the first thing that struck me was the quality of her workmanship. Angler Boats have a reputation for building top quality boats, and once again they have proved it with this new boat.
She looks stunning, is neat and tidy, and just to add that little bit extra, the edges of her upper deck have been redesigned, just to set her apart from all other boats on the market.

CONDITIONS
Naturally, the conditions in which we test a boat play a large role on the performance of the craft on the day. If the sea is big and all over the place, it is difficult to take photos, but easy to make the boat perform and to put her through her paces. If the conditions are calm, then it’s the other way around: taking photos is easy, but getting the boat to perform out of the ordinary is a challenge.
When we tested the centre console the sea was totally horrific, but this time the weather played along and there was no wind, although the sea was a little all over the place. The sky was still grey, with the cold front having just passed through, but we had to make the most of what we were given — and this we certainly did.

LAUNCHING AND TRAILERING
It is dead easy to load and offload the Benguela on the slipway because their trailers are made inhouse at Angler Boats and are supplied to the dealers. This makes it a perfect buy for the customer because the boat is loaded onto the customised single-axle galvanised breakneck trailer at the factory, and the package is ready to be hitched up and towed away. Fuss-free.
However, as with all Angler Boats I certainly never have reason to be concerned: she fitted perfectly onto the trailer, and she slipped off her rollers into the water, hassle-free. Reloading her onto the trailer was also easy. You could either drive her up or winch her up by hand — in both cases very simple. I’m sure it would be a cinch to launch her from the beach as well. 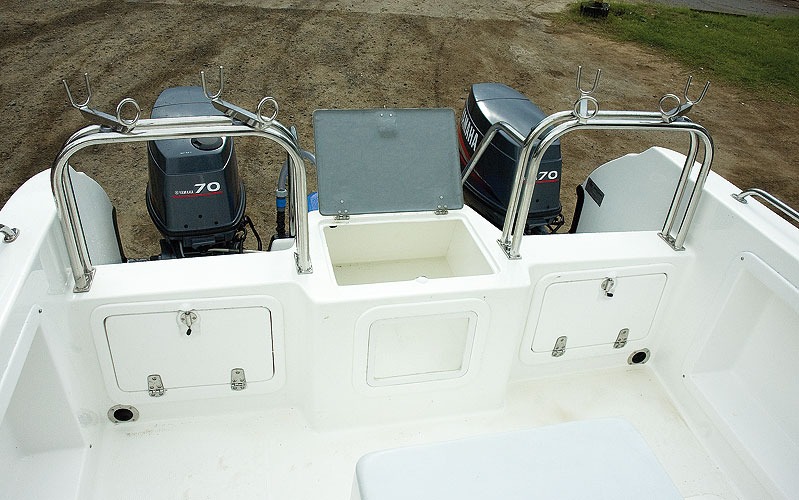 MOTORS AND CONTROLS
This new Benguela 530 FC was rigged with two 70hp two-stroke Yamaha outboards. The controls were normal sidemount cable controls. Bill Harrison from Natal Caravans & Marine had fitted hydraulic steering to her, which makes the cable controls ultra-smooth and easy to use.
From past experiences I have found that if you can afford to spend that little bit extra to fit hydraulic steering, it will make your life at sea that much more enjoyable.

PERFORMANCE
Depending on how the skipper has rigged his boat, going from a centre console to a forward console can be quite an adjustment. In this instance, the FC boat had been fitted with two 70hp two-stroke Yamaha motors, while the CC model had two 60hp four-stroke Yamahas. There was not a big difference in power, but one is aware of the differences with regard to the noise and smell. We get spoiled these days with the four-stroke motors — both odourless and silent.
Out the hole the Benguela 530 FC got onto the plane in less than three seconds. This is fairly fast if you take into consideration that your weight displacement is totally different compared to the CC. The ride of the hull is more or less the same, and I could not get her to cavitate while turning. Her turning circle was tight, and that makes her ideal for surf launching off the beach.
Running out with the swell, she performed just as well as she had in the calmer waters. The 530 cut through the chop and swell smoothly, without having to change the trims, and I was still able to keep the ride dry. She rides very proud and that also keeps most of the spray from the bow under control. Staying dry is a big priority for me.
Another characteristic that I was impressed with was that, when dropping over the swell and chop, her hull didn’t bang. She reacted instantly both when accelerating and when I had to tap down for a swell, making it easy to control her ride.
For a craft of her size, the 530 is a relatively wide cat, which definitely helps her lateral stability. She did not roll with the side-on swell, whether stationary or while running at a fairly high speed. 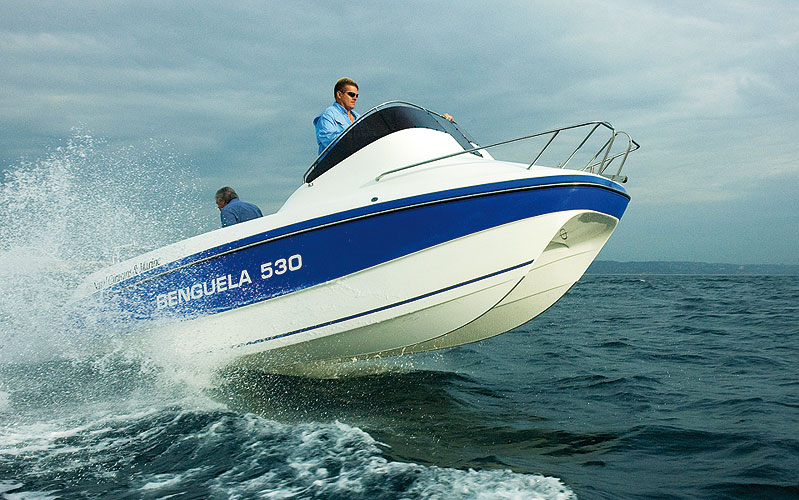 Turning to port and running with the swell, I could maintain a constant speed without ploughing or broaching into the trough, easily accelerating out of the troughs again with the ample power of the twin 70hp Yamahas. As she was fitted with the hydraulic system, steering under acceleration was made simple and easy. Although the new cable steering systems are a lot better than the  old ones, my preference would definitely be to go for the hydraulic version. When running directly into the swell, the Benguela 530 FC again handled exceptionally well for a craft of her size. If you ride a boat like a gentleman, not a cowboy, you can create a suitable, comfortable ride even in the worst of conditions. At a reasonable speed, as well as when accelerating and decelerating, the 530 was able to slip softly and easily through the chop, without sending shock waves through my bones.
Smaller boats usually handle well in fairer weather conditions, but because of the good general handling of the 530, I am confident that she would maintain all these characteristics in an even rougher ocean. Having all the extra bells and whistles definitely helps when you need to change your ride to suit the conditions.
When stationary in the rougher conditions, very little water flooded over the false transom, and even when it did, the water drained fairly fast. At slower speeds, from idle to a trolling speed of 2-4 knots, the Benguela 530 maintained reasonable to good stability in all directions.
For her size, the Benguela 530 FC has plenty of deck space, which is great from a fishing point of view for manoeuvrability around the boat. For general offshore fishing you could comfortably fish two to three anglers. These craft also work exceptionally well for deep sea flyfishing, the deck space and stability being the main plus-factors in this facet of angling. The Benguela 530 has comfortable, high gunnels which I found easy to balance against, which makes it more comfortable when fighting fish or when jigging.
In general, I could not fault the performance of the new Benguela 530 FC. Not once did I feel unsafe or that she wanted to lean over to one side. As with her sister, the CC, I felt she was under control all the time, and with the slightly bigger motors I would rate her performance as outstanding. 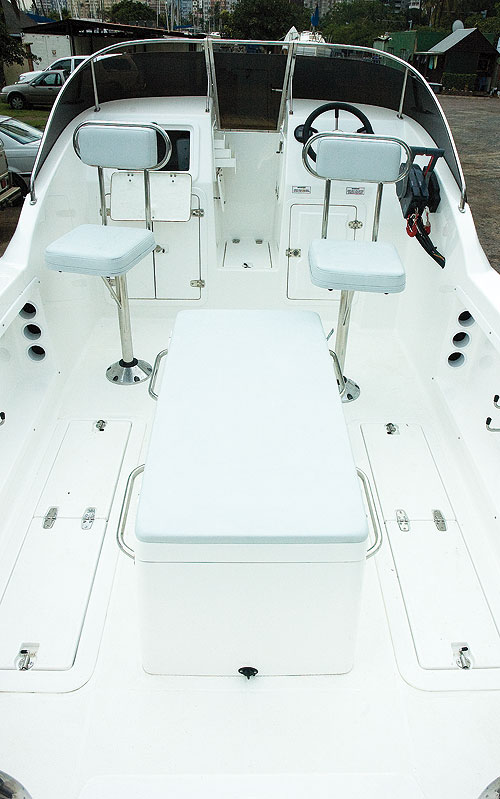 DECK LAYOUT
Let’s start at the stern … Above the false transom, Angler Boats have fitted two steps, just in case you have to get into the water or onto the boat from the water, for some reason. The false transom is fairly high, so the likelihood of water washing over the deck is slim.
The livebait well has been fitted into the false transom, with battery compartments on both sides. The well has a window so that you can keep an eye on the bait, it and has a bait pump that keeps on pumping all the time while travelling.
The deck draining holes are fitted into the corners on both sides.
Fuel hatches are fitted in the middle of the deck with fish hatches set into the deck. On both versions of the craft, very neat rod holders are set into the gunnels.
There are two swivel seats behind the console — one for the skipper and one for crew — and I have noticed that these seats have been reinforced to be able to carry our bigger fishermen from upcountry. I have seen many similar seats break, but these are made to last.
On both sides of the console there’s storage space, with a walkthrough area to the anchor hatch in the front. In the sides of this walkthrough they have made storage space for tackle — a very nifty idea. On the deck in the walkthrough area there’s a space where you can keep either your juice/refreshments or your bait cold.
The anchor hatch is also something special: it’s so big that it would be easy to get your anchor in and out the hatch — no problem. If you’re jigging, this hatch is big enough for somebody to stand in and fish from if both the doors were opened. I reckon Don thought of everything when he put this boat together!

FINISH
What more can I say? The Benguela 530 FC has the Angler touch — it’s neat and tidy, and well finished off like only an Angler Boat could be. They have very high standards to maintain, and they certainly haven’t dropped an iota on this boat.
Do yourself a favour and compare the finish on this boat with any other boat on the market. Indeed, you’re sure to be impressed.

CONCLUSION
I think that Angler Boats have outdone themselves with their first foray into the offshore market. They have raised the bar on the quality we can expect from boats, and others who follow will have to work very hard to meet that standard. It’s wonderful for the industry that they have set such a high standard.

The Benguela 530 FC is one of the better and more stable boats available in her class in South Africa. If you’re in the market for a good boat, plus if high quality and top workmanship are important to you, this craft is definitely worth a good look. •