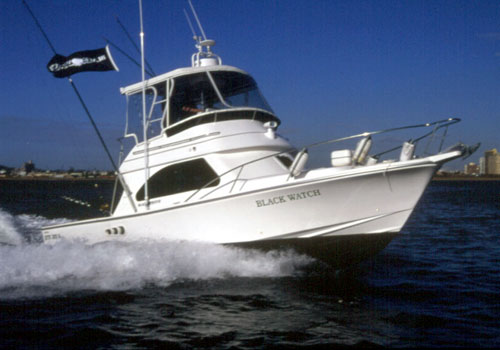 In action, with my backside effectively locking the steering, a hand on each of the pod-mounted single lever controls and feeling the Black Watch 34 shudder as I backed up at speed, I felt truly at home on this incredible fishing machine. She was like putty in my hands, veering from port to starboard as I worked the controls. Below me and in full view was the entire cockpit, and I watched the transom wake rolling up and over the marlin platform.

The only thing missing was an angler in the fighting chair harnessed to a buckling rod, the reel screaming and a mighty marlin heaving itself out of the water.

Yes, a man is entitled to dream, and indeed I was dreaming — well at least for part of it. The angler and fish were a dream, but the boat and the onboard action were a reality.

While many men merely dream of owning such a craft, others make it a reality. I have known Cas van der Merwe for many years, and his interest in fishing craft and fishing goes back a long way.

“I have eventually decided on the Black Watch 34,” he excitedly told me a good few months ago, “and, what’s more, I am going to be marketing the full range of Black Watch sportfishers in Southern Africa.”
The craft duly arrived in Durban, and my first view of her on moorings in Durban Yacht Basin consolidated the images I had gleaned from many Australian boating and fishing magazines. In real life she not only looked really lovely, but also carried an immediate impression of Australian robustness and very practical finishes. All this was in addition to her obvious overall design of a midrange sportfisher.

This impression was again brought to mind as the Black Watch followed the 30ft outboard-powered cat, belonging to Antonie Smalberger of Jentan Marine, through the confines of Durban harbour and out to sea. Naturally, the Black Watch looked even better when she picked up speed and got onto the plane as we exited the breakwater and proceeded to sea.

The last of the winter cold fronts had passed through Durban during the preceding 24 hours, leaving behind it a big swell and the dregs of a south-westerly wind that was blowing a steady 15 knots. A fair chop covered the ocean’s surface, throwing up the odd white horse.
Like most ocean-going boats, the Black Watch 34 likes the lift a living sea imparts to a hull’s performance, and the boat in question was enjoying her very first taste of African waters.
Throughout the photographic shoot I carefully observed the way the craft’s hull worked the water. She lifts her shoulders onto the ocean surface as she gets onto the plane and, using the sharp entry of the base of her vee bow, she tracks perfectly across the swell and chop.
Viewing a craft such as this from very close quarters as she thunders across the ocean is enthralling and a sight very hard to equal. However, once aboard the craft and firmly in control of her helm, one adds the dimension of feel to the equation, thereby allowing her to make an impression via sight, sound and feel. So it was when I clambered up the steps to the Black Watch 34’s flybridge, took over her controls and set her on a 20-knot run up the coast in the following sea. 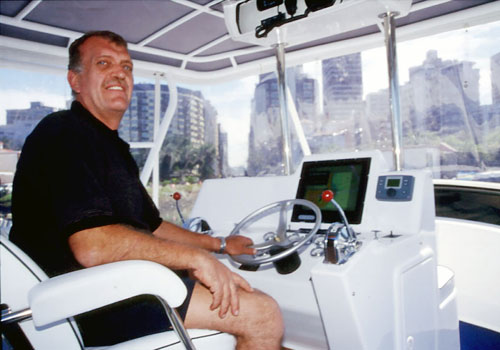 At such a moments when one starts absorbing the hull’s ability, her characteristics, her idiosyncrasies and overall feel, a craft evokes a feel that is almost impossible to describe. So it was that I gradually got to know and appreciate this boat as we made good progress up the coast.
During this initial run I quickly established her sensitivity to trim — a mere touch of the up/down switch of hydraulic afterplaners altered her attack on the water as well as the lateral heel of the craft. I found out that she loved a speed of between 18 and 20 knots in the prevailing sea, a speed at which everyone aboard could sit back and enjoy the ride. Sure, we could have increased our cruising speed — and I did for a short distance, but then relaxation turned to stress because all aboard tensed up as she started to really fly across the water at nearly 30 knots. Indeed it was a thrill, momentarily, but it’s not the way I like to skipper a sportfisher.

The effects of the ever-increasing swell and chop were beginning to make themselves felt as we passed out of the semi protection of the lee created by Durban’s Bluff. I trimmed up her bow, allowing her to settle her stern in the water as we outran the swell. She tracked extremely well and did not lose too much speed as we ran out of the trough onto the back of the next swell.

By now it was time to swing her bow seaward to see how the craft would cope with what was a fairly good sized beam sea. She needed her bow to be lowered a bit, and then, without throwing too much water, was able to cruise comfortably at about 13-15 knots whilst not being unduly affected by lateral roll.

Then the acid test — into the sea. This time I swung the wheel until her bow faced directly into the wind and sea. After dropping speed to just on 12 knots and a further drop in bow to cleave the oncoming chop, we progressed very satisfactorily for a good five to six kilometres. An odd attempt to raise her bow and increase speed caused a fair degree of pounding which neither the boat nor I liked, so back we went to the trim that suited both of us.

One can’t help getting the impression, soon after boarding this craft, that she is first and foremost a fishing machine, designed and built by fishermen for fishermen. Being a fisherman myself, I soon became very enamoured with her. I liked her feel, I liked her responsiveness to the full range of controls and, what’s more, I liked her size.

This latter aspect needs a little clarification. Being traditionally a ski-boat operator, I enjoy the closeness to any action aboard, as well as the manoeuvrability that smaller craft offer. I find a craft in the 30/36ft class give just that experience, and the Black Watch 34 — with its well positioned flybridge and manoeuvrability — gave me that precise feel too.

At sea, because one spends the vast majority of time fishing, I spent much of this outing seeing just how the Black Watch 34 handles herself while trolling and even on the drift.

For a craft to attract a wide band of followers, she has to perform, and in Australia this particular model has a reputation for raising fish which is a very good reason for her popularity. I sincerely hope she does the same for Cas in our South African waters. 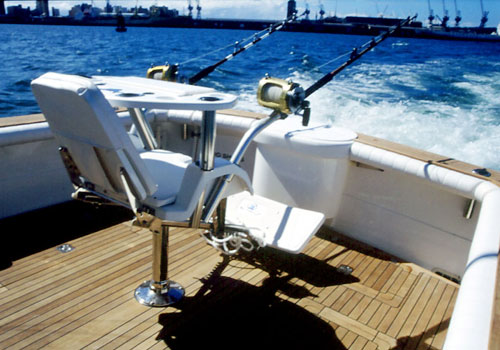 What did I like about her slow-speed performance that led me to believe she would be good at raising fish? The most important was the wake she threw — at between 3,5 to 5,5 knots it was minimal or confined, and a reasonably well contained wake was produced at speeds up to 8,5 knots. Furthermore, she has had trolling valves fitted on both motors to enable her to troll at very low speeds, like necessary when trolling livebaits for marlin or ’cuda.

Only one aspect of her performance at low speed and on the drift perplexed me a little — her lateral stability. During later discussions with Johan van den Berg of Boats 4 Africa, he pointed out that the sea in which we did these trials was steep, if not that big, and this could have over-accentuated the roll.
The Black Watch 34 is powered by twin Cummins Diamond Series six cylinder 330hp turbo-charged diesel motors that provided her with outstanding performance and speeds up to 30 knots. Importantly, the motors have been positioned to allow easy access to them — access to the back end is via lift-up, upholstered engine covers aft of the saloon; and access to the filters, which are situated in front of the motors, is via a hatch in the saloon itself.

I found the motors very responsive and easy to operate during backing up and also while mooring her in the marina.

As a fishing craft the cockpit area is really great, with plenty of room, high padded gunnels, teak decking and top gunnel cladding, as well as sufficient underdeck fish hatches and space to access all the necessary mechanics below deck. The fighting chair is also well positioned and has all the swing necessary for fighting big fish.

For its size I loved the flybridge on the craft. It is very comfortable, as it should be, being the only helm station of the craft. Designed for the boat captain who has to spend almost his entire day on the flybridge, both while running to the fishing grounds and through the actual fishing periods, it needs all the extras that have been provided.

Although the Black Watch 34 has a “soft top” or “Bimini top”, it is well supported by a sturdy aluminium T-frame that not only holds the canvas covering extremely taut, but also provides for the fitting of full clears, thereby affording total protection for the captain, even in the most inclement weather.

When it comes to the saloon, the Black Watch 34 is unpretentious by sportfisher standards. One is left with no illusion that this is a fishing boat and not a cruiser. 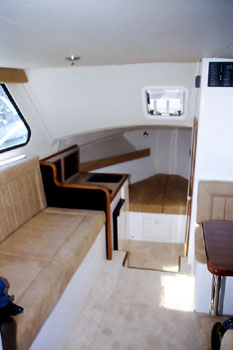 The builders have provided adequate comfort in a moderate galley and a bow or vee berth tastefully upholstered, but without any privacy. An upholstered couch in the main saloon (lounging area) also turns into a bed once its backrest is lifted upwards. The second bunk bed is suspended from two eyeballs in the cabin ceiling.

The galley is complete with gas stove, fridge, a sink and a reasonable amount of cupboard space. The bathroom area has been well designed with a basin, hot shower and toilet — and, of utmost importance, there is adequate space for the person using it to do so in comfort.

Whilst I have used the word “unpretentious”, open-plan could also apply, because within the saloon all the interior design, finishings and fittings are very tasteful and robust. They are built to last — and look good as well.

In essence, however, there is no doubt that the craft is built as a fishing 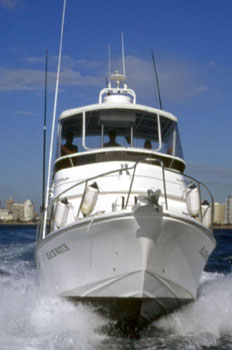 machine and it is the “working end”, the fishing cockpit, where the greatest emphasis has been placed.

The Black Watch 34 will be operating out of Richards Bay where Cas is domiciled and is, without doubt, a craft that will prove herself in the difficult fishing waters off that port. Long runs up and down the coast, as well as extended distances out to sea to get to the fishing grounds, need a craft that is capable of running with big following seas and, most importantly, the ability to run in from the deep in a full beam sea. The Black Watch 34 should easily accomplish all this.

Black Watch produces a number of sportfishing craft between 26ft and 50ft, all of which have one thing in common — they are built for the serious big game fisherman.

Cas is very keen to show off his new Black Watch 34, so visit him in Richards Bay and see for yourself what a fine fishing craft he has brought into South Africa.