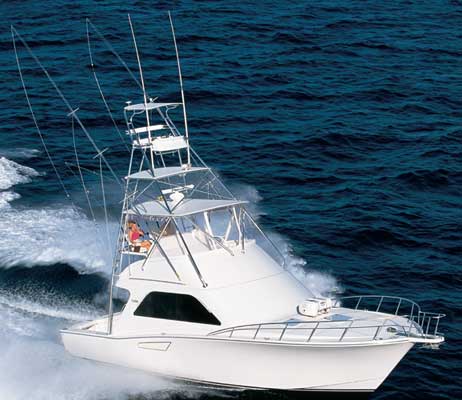 You’d never know it to look at their boats — and I beg you not to hold it against them — but before Henry Morschladt and Michael Howarth started Cabo Yachts back in 1992, they built sailboats. In fact, hard-core around-the-world types considered those boats to be the only ones on which to challenge the seven seas.

Morschladt and Howarth knew well how to build boats, but not necessarily offshore sportfishers. So they commissioned well-known designer Bill Creelock to draw the lines for the first Cabo 35 and have never looked back.

The newest Cabo, a 43-footer designed by David Napier, debuted recently and already has a raft of devotees.

Performance
I expected the 43’s ride to be rougher and wetter than that of Cabos built prior to model-year 2000, because its unusual hull design has no running strakes. I was wrong. Surprisingly, the lack of strakes didn’t allow blow toward the sky (then hit the flybridge and cockpit). The 43 also exhibited less lapping noise than do boats with strakes while remaining comfortably stable in a two-foot beam-sea drift. Not that noise scares offshore fish like it does backcountry species.

Twin MAN 2848LE 403 diesels rated at 800hp each actually developed only 789hp, according to the DDEC engineers’ evaluations. No matter. These power plants pushed the Cabo 43 to a top speed of 41 mph at 2 400 rpm while burning 382 litres per hour. A more economical cruise speed of 30 mph at 1 800 rpm used 191.25 litres per hour. I found an extra mile per hour or so at every rpm by adding a little bow-down trim with the tabs.

The Cabo 43 has a sharper entry than its siblings, so she handles head seas better. I thought the lack of strakes would cause some sliding in a turn, but it carved every turn perfectly with hardly any effort on my part, thanks to improved hydraulic steering and advanced rudder design.

I did find more delay between the time I shifted into gear and the time the transmission engaged than I would like. A mechanic can adjust out much of this delay before you take delivery from the dealer.

Fishability
The 43’s cockpit appears more functional than aesthetically pleasing, compared with that of other Cabos. It houses fishing features you’d expect, such as washdowns, baitwell, rigging station with sink, and so on.

But I miss the lucite window built into the front of the 48-gallon baitwell, which allows you to easily check the health and number of baits when fishing, and turns the well into a lighted aquarium at night. Cabo was a pioneer of this piece of functional art.

Cabo handles every layout detail perfectly. The caprail is just the right distance above the water; the gunnel meets your leg just above the knee. Backing down at 7 mph allows very little water into the cockpit. And the hatches can be dropped from wide open with naught but a quiet whoosh as the air escapes. And there’s no slamming either, which means that no water is going to get into these boxes.

You’ll find rod storage under each gunnel — five rod holders in the gunnels and five more across the back of the flybridge. Add to that additional rod storage under all the settees in the salon, and you can see that whether you need light spin tackle or 130-pound heavy gear, you can always be prepared.

Design and Construction
The hull, flybridge and interior of the Cabo 43 are completely different from those of its forerunners. While most boats today have a constantly variable deadrise from bow to stern, this 43 has a constant 18H degree deadrise, starting just aft of amidships and carrying to the transom. Cabo thinks the constant angle is better and more efficient. I think the jury’s still out.

I liked the secure feeling a handhold bar around the console provided. In fact, handholds throughout the Cabo 43 have been well executed. Every open space — except where you cross a cockpit with no chair — has something you can grab to maintain your equilibrium.

Cabo Yachts wrote the book on engineering engine compartments. Cables and piping — all clearly labelled — couldn’t be easier to trace, though all these conduits are hidden. Generators and and airconditioning compressors go aft, while oil change systems, filters and other quiet equipment are mounted forward, next to the living quarters. Anyone can easily fit and work 360 degrees around the engines.

Cabo’s sophisticated interior with custom woodwork, fabrics and luxury amenities, make each boat an easy sell for your significant other. The 43’s three-level interior consists of the top level, L-shaped dinette to starboard; the salon with its L-shaped settee in the middle; and the galley and living quarters on the lowest level.

Two short V-berths and a twin-sized single berth (at knee level, starboard side) sleep three in the forepeak, while the starboard master stateroom rocks you to sleep in a fore-and-aft double. The master also includes a private head and shower.

• Piano hinges on all hatches

Impressions
It’s hard to imagine such major improvements to a Cabo, but the bar has just been set much higher by this industry benchmark.