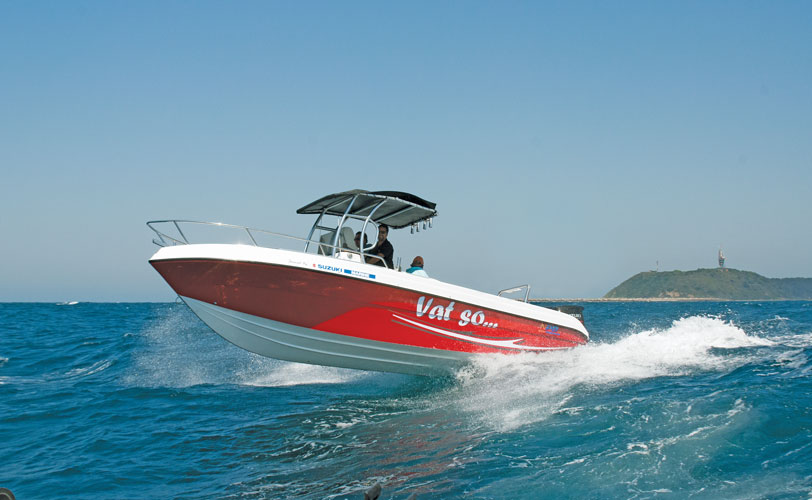 ON many occasions I have been asked what boat I would choose for myself if I could have absolutely any boat. Every time I have made the same comment: my ideal boat is the Citation 900 CC, but I would never buy one because I know I would not use her to her full potential. My wife says I’m a pessimist, I think I’m a realist.
However, all that changed when I saw and later tested the Citation 700 CC. I think this was a sneaky trick by Nick the Greek Lanzanakis from Natal Power Boats. He conned me into testing a boat for him, then brought along the Citation 700 CC for us to use as a photography boat. Then he got me to do a test on that as well! Well played, Nick. 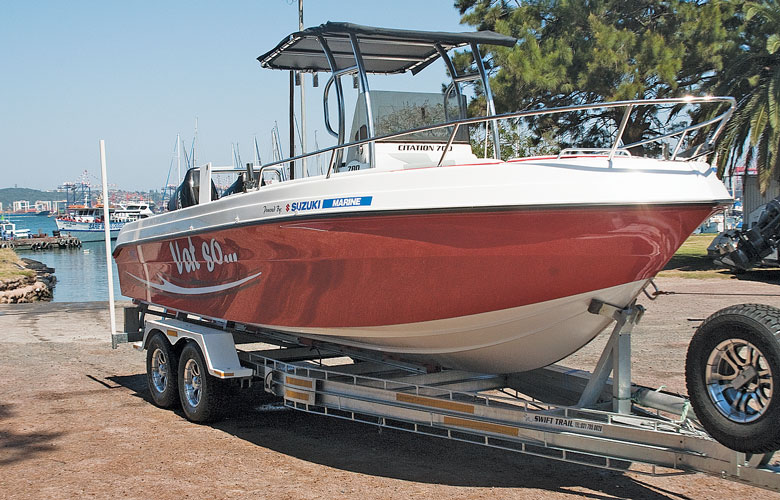 FIRST IMPRESSIONS
I did not see the Citation until we met up at Durban’s harbour mouth while we waited for permission to leave the bay for the test on the other boat. I looked over at the photography boat and asked Shaun from Natal Power Boats what craft it was. At first I thought she must have been an imported boat, but when they pulled up alongside us I could clearly see she was the smaller sister of the Citation 900.
I fell in love all over again. I could not wait to finish testing the boat I was on just so that I could ride on the Citation 700 CC. I was very taken with her bright paint job and was impressed by the whole layout of the rig. 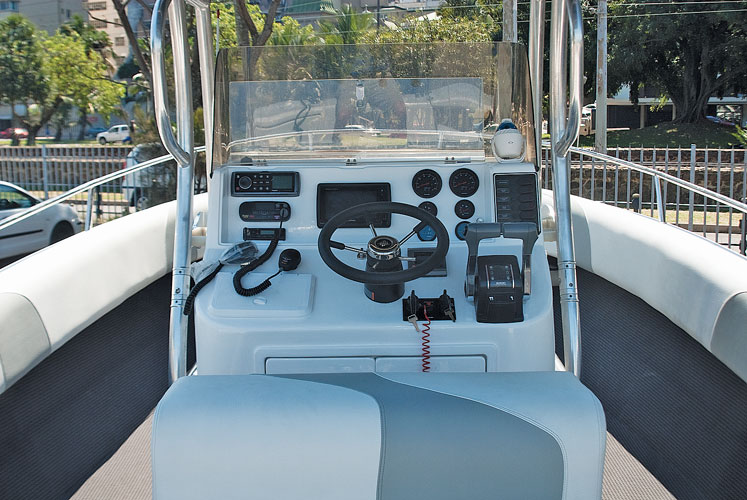 PERFORMANCE AND MOTORS
The Citation 700 CC test boat was fitted with twin 115hp Suzuki four-stroke engines with hydraulic steering and binnacle-mount controls. The controls and steering were smooth and very soft — just as they should be.
She was out the hole in a flash. Indeed, I would rate her as one of the best boats when it comes to takeoff, and throughout the test her stability was top class. I put her through her paces with plenty of swings and turns and not once did I get wet. The two 115hp Suzuki motors on this boat were incredible, producing more than enough power, and if something should go wrong you would be able to get home on one motor with ease.

I did not feel uncomfortable or unsafe at any stage while on this boat, even though the weather conditions were not great at all.
I watched Nick and his customers put the Citation 700 CC through her paces while I took photos, and only once did I see them ducking away from some spray. Not once did I see water come over the front, even with Nick driving like a hooligan. When I tested her no spray came over the front or the sides. She’s a very dry boat indeed and, as mentioned, one of the most stable boats I have been on.
When it comes to performance and the boat in general, this is what Nick had to say after they tested her at sea and up on the Vaal …

“This has to be one of the most impressive boats I have ever ridden on. The Citation 700 CC went extremely well in the harbour, on the Vaal River and offshore. She’s an ideal multi-purpose boat for deep sea and freshwater fishing and is also a superb water skiing/wake boarding rig.

“She planed within 1.5 boat lengths with three of us aboard, and planed on one engine, getting up to 41km/h according to the GPS. On two engines she cruised at 3 500 revs at 42km/h with four people on board. Top speed was 67.9 km/h. We used the boat on a round trip of about 40km and used less than 30 litres of fuel in total,” says Nick.

The boat is built with synthetic materials so she is light and very easy to tow and handle. Her performance is nippy and a pleasure to take through all manoeuvres, mostly because of the large planing surface and because she has been built as light as possible.
Her open layout makes for a massive space for spinning, jigging and popping, so this craft should appeal to anyone seeking a super stable fishing platform.

“What really impressed me,” added Nick, “was her performance on the Vaal River where she flew with the same 19 pitch props we used in the sea. Back on the salt she is extremely stable in a following sea, showing absolutely no signs of dipping or broaching.” 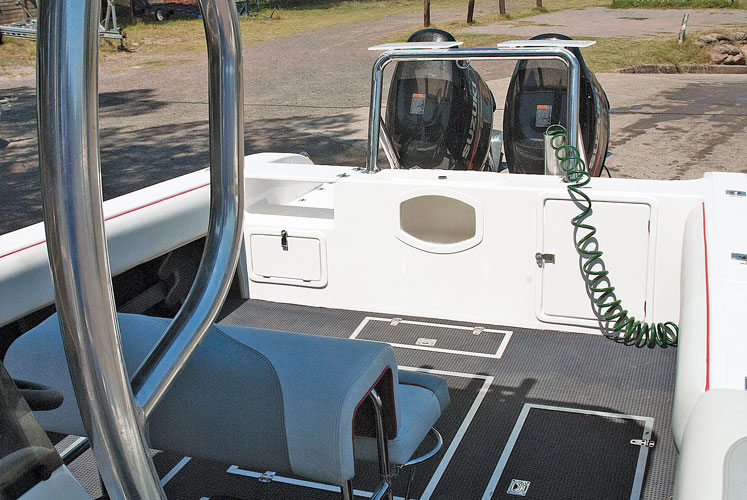 LAYOUT
I like the way the Citation 700 CC has been laid out, but if this were my boat I would have asked the manufacturers to change a couple of things to suit my personal preferences. Nick is happy to accommodate requests of this nature because he knows everyone has their own way of rigging their boat.

On the test boat, as usual the anchor hatch was right upfront. Directly behind this is a comfortable, padded seat with some storage space below it. In the deck below that seat there’s also a fish/storage hatch. Just in front of the centre console there’s another seat which also hides some extra storage space.

The centre console accommodates all the usual electronics and is covered by a T-top — either stainless-steel or, in this case, aluminium — which has extra rod holders on top. There’s also plenty of storage space inside the console.

Behind the console there’s a very comfortable bum seat for the skipper to sit on or lean against. The bum seat also has extra seats on the back for the crew, with extra storage space on the sides and underneath the seat.

On both sides of the deck there are fuel hatches which can each hold five jerry cans, and there’s a fish hatch sunk into each side of the deck. Everything has been positioned out of the way to create more space. Also, the padded gunnels are higher than your knees, so they’re comfortable to lean against while fighting a fish.

At the back there’s a small roll bar with perfectly positioned cutting boards on it. The livebait well in the false transom is huge and has a window so that you can easily keep an eye on your bait.

Batteries can be found inside the hatches in the false transom. There’s a deckwash pump inside the deck at the back, as well as a pump for Luna tubes if you fit them. In front of that, also sunk into the deck, there’s a huge fish hatch that would easily hold a 30kg ’cuda.

Extra rod holders are fitted in the gunnels for trolling rods when you’re fishing for marlin. On one side of the transom there’s a door which is especially useful when climbing aboard or load a huge fish. 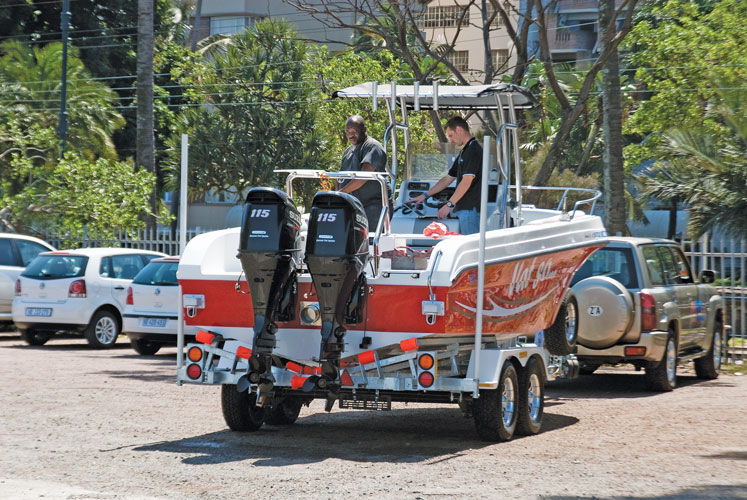 CONCLUSION
This is definitely one of the best boats I have been on. As I mentioned earlier, I loved the Citation 900, but she’s much too big for my needs. The 700 CC is ideal, though, and is small enough to tow around — even to Moçambique.

Thanks for whetting my appetite, Nick. I have fallen in love with this boat and my boat/fishing partner, Trevor, and I want one!
If you’re in the market for a boat of this size, make sure you take the Citation for a test drive. Well done to Nick and Mike Barnes from Mallards who built the boat.