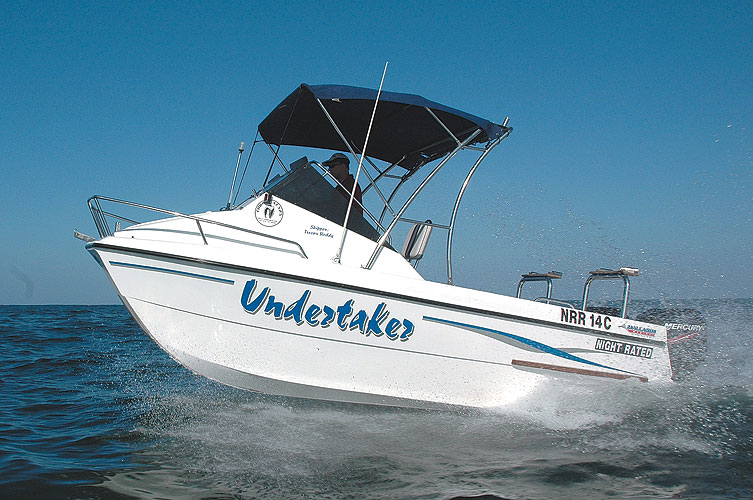 SINCE Mallards first launched the Cobra Cat range they have come a long way towards establishing themselves as one of the best ski-boat manufacturers in the country. I was recently asked to test a Cobra Cat 525 which is judged by many to be one of the best boats of that size in the marketplace.

Although I have ridden on Cobra Cat 525s quite often, I was very excited to put the boat through her paces and do things with her that you would not do under normal circumstances.

My first impression of the Cobra Cat 525 is that she’s stylish and neat. Since she first came onto the market in 2000 a few changes have been made to the overall look, but ultimately this is a boat that was made to stand the test of time. Like Allan O’Connor once said to me, he would take any boat as long as it’s his Cobra 525.

The boat that we were going to test belongs to Trevor Reddy, a friend. What made me so excited is that Trevor has got big plans for this Cobra 525, and I was going to test her properly to make sure that he had made the right decision. First impressions were that there was certainly enough deck space for my liking, and the finishes looked classy.

I liked what I saw.

We were suppose to do the boat test on the Tuesday, but when I saw the sun was out for a change in Durban and there was no wind midmorning on the Monday, I suggested to Michael Barnes that we meet him and the photo boat at Rod & Reel Club just after lunch.

The sea was glassy, but the swell was all over the place due to lots of wind we’d experienced in Durban over the previous couple of weeks. Fortunately, by the time we got on the water, the wind had died down completely. 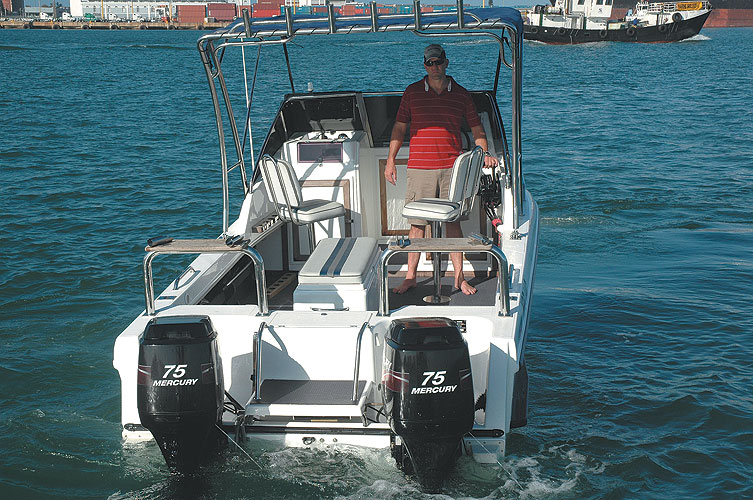 This was a great opportunity for me to get the feel of towing a 525 myself, so I drove to Trevor’s house to collect his boat. The 525 looks very big on the trailer, but towing her on the freeway at 110km/h the rig was stable with no swinging or pushing. Even through traffic in town I had no hassles controlling it. I was really impressed at how this big boat pulled behind my bakkie.

At the slipway she slid off the trailer easily and smoothly. Getting her back onto the purpose-designed galvanised breakneck trailer was just as easy — I reversed the trailer half way into the water and Michael drove the 525 straight on. No hassles.

Another friend of mine also has a 525, but he mainly launches off the beach, so he has fitted a push plate on the stern of the craft, and they use a tractor or 4×4 to push their boat into the surf with a pole. This is an easy method many people use when launching off the beach. When it comes to pulling the 525 back onto the trailer, a which makes it a cinch.

The specific Cobra Cat 525 I tested was fitted with two 75hp Mercury two-strokes with four-blade 19-pitch stainless props. The boat had side-mount controls which were pretty smooth for two-stroke cable controls. The 525s are rated to take anything from twin 60hp motors up to twin 90hp motors, and with the twin 75hp motors I could get a good indication if their motor rating was correct. 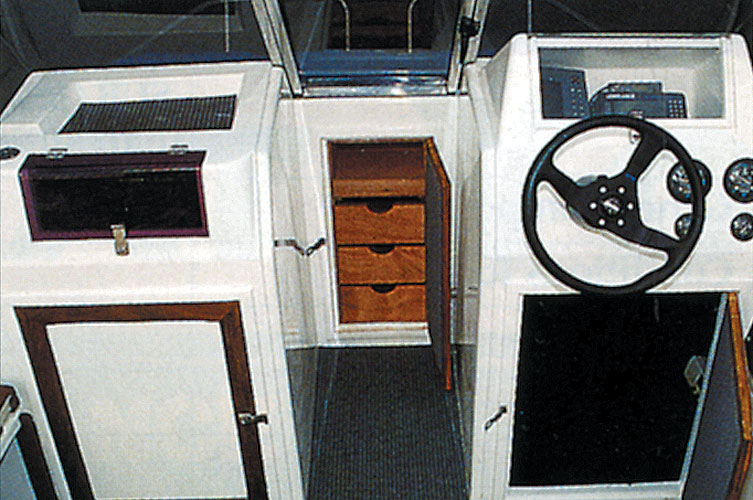 This is the first time that I had ridden the 525 boat with this combination of motors and I didn’t know what to expect. The bottom line? I was amazed. Out of the hole she was lightning fast and with the engines trimmed up a little bit it was even faster.

I tried my best to get the motors to cavitate, but to no avail. I turned as sharply as possible with both throttles open — still no cavitation. Then a couple of figure-of-eights — nothing. I ran into the swell, turning the boat in both directions, and the 525 just bit into the water and turned. The stability was incredible, both at full throttle and at trolling speed.

I spoke to Mike Barnes about the craft’s weight. It turns out that there’s not much difference between the weight of a 525 and any other boat in her class. My personal opinion is that the little bit of extra weight makes the boat stronger and more stable.

After putting her through her paces, I agree with Mallards: I would not recommend putting anything smaller than 60hp motors on the 525. By the time I had finished trying to push her past her limit, I have to say that I was impressed. I would happily take on any big sea in a Cobra Cat 525 with confidence. 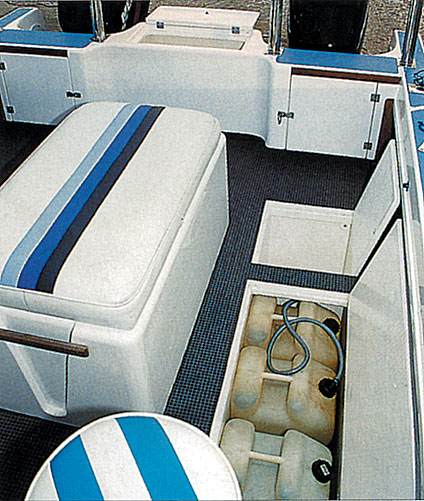 Everything is in its place and neat and tidy aboard the Cobra Cat 525. Her foredeck is designed as a working area — it has a semi-walk-through console with a windscreen that opens so you can easily access the anchor hatch. There is plenty of storage space in the front and in the gunnels which are more or less knee high, depending on your height. This makes her ideal for vertical jigging, dropshot- or bottom fishing. With the 525’s incredible stability you can happily move around on the boat without falling over.

At the stern the livewell has been fitted into the false transom and it is fed by the scoop water pickup and submersible pump. The deck area has a pretty standard configuration, with fuel and fish hatches on each side of the sponson, and flush with the deck when closed. This particular boat has an extra hatch on top of the deck that is used for seating, as well as a large fish hatch that can be removed if it’s not needed.

I found everything to be just the way I like it — steering just the right height, controls smooth and a soft carpet to stand on.

Taking into consideration the space and her stability, the 525 could be classified as an all-rounder. From bottomfishing to trolling for gamefish and everything in between, it’s the type of boat that could be used for all facets.

The finishes on the Cobra Cats in general rate among the highest standards in the market. When somebody talks about a Cobra Cat I immediately think of a neat, classy boat. We all know you can’t keep everybody happy when it comes to service, but Mallards certainly strive to keep all their customers satisfied and proud of their craft.

The Cobra Cat 525 is one of the best smaller size cats in the market, if not the best. With this boat you get good value for money and it should last you a lifetime. The 525 was very stable and easy to tow, and out at sea I could not fault her. This is another one of Mallards’ large range of deep sea boats that is well worth looking at. 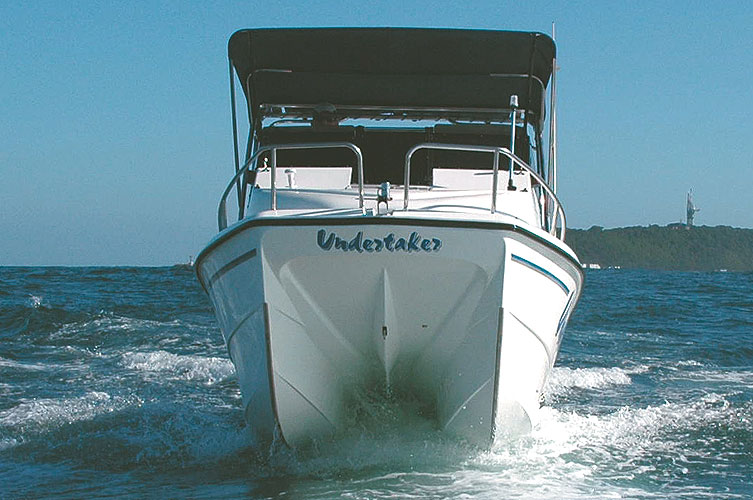