DURING May I needed a craft to use as a photo boat while undertaking another boat test, so I called Nick Lanzanakis of Natal Power Boats to ask him for help. Nick obliged without hesitation and asked if I’d test the new Cobra Cat 630 at the same time. Although I’ve tested a number of Cobra Cats before, he assured me I would see and feel the difference in this new craft. I was intrigued to see what changes had been made, so quickly agreed. 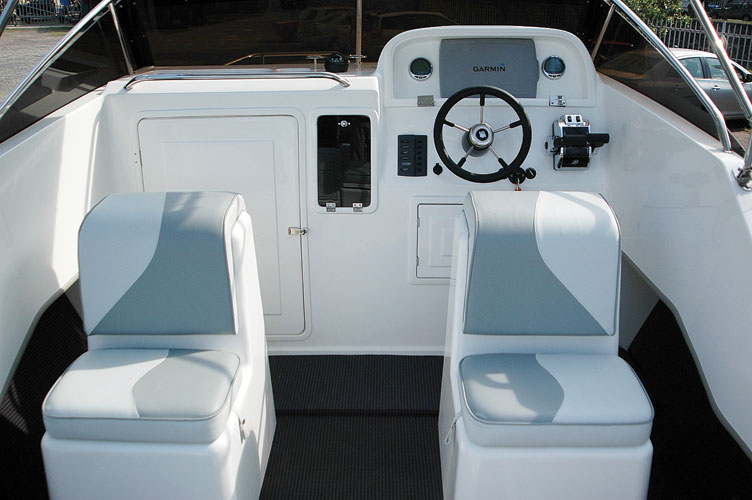 FIRST IMPRESSIONS
When I saw her standing there on her double-axle trailer I could immediately see the trademark features of a Cobra Cat, but there was definitely something different … One thing had not changed, however — she looked as impressive as ever and I liked what I saw. This 20ft boat will turn heads even when she’s on the trailer.

WEATHER CONDITIONS
The sea was fairly flat, with a slight southwesterly blowing. The swell was very small, so I had to push hard to get the boat to perform all the trials I wanted to put her through. 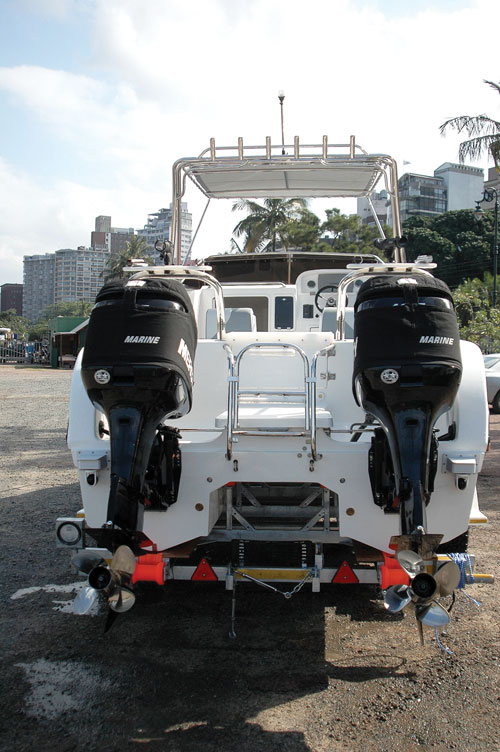 PERFORMANCE, MOTORS & CONTROLS
This particular boat had been fitted with twin 125hp Mercury Optimax motors. These engines are in a class of their own when it comes to performance, and they come standard with a five-year warranty.
The fuel consumption on these motors is also brilliant. I’ve tested them against 4-stroke motors in similar conditions on a number of occasions and have found Optimax engines to be lighter on fuel than comparative 4-strokes. Power-wise they perform like normal 2-stroke engines, delivering the required “oomph” as soon as you push open the throttles.
These engines also had hydraulic steering which made them very easy to steer. This steering, in conjunction with the binnacle mount controls, made for a very good, smooth combination for these Optimax motors.
Even though this is a 20ft craft, her pull away is very fast. Her performance is nippy for a couple of reasons, most notably because the new Cobra Cat 630 is much lighter than any other Cobra Cat, partly because no wood has been used on the boat at all — it’s all fibreglass/synthetic. They have used some conventional foam at the back of the boat, but for the rest the flotation medium they have is a type of foam that I came across a couple of years ago. It’s a black NA high density foam, “86-LD PX 25”, a very clever idea I must say.
It’s easy to see that she’s much lighter just by looking at the way she lies in the water, and on the move she rides higher out the water. Incidentally, Nick had taken the boat and the trailer to the weighbridge where the hull complete with engines and equipment came in at 1 950kg, and the trailer with two oil-filled axles registered 1 050kg.
She was very quick out of the hole with the power of the twin 125hp Optimax engines behind us, and I didn’t experience any of that rolling motion you often get with heavier boats. Running with the swell there was also no rolling motion at all, nor any indication that she wanted to broach or dig her nose into a swell.
The new 630 runs very proud, with her bow up which ensures that she is dry. No spray came over the bow, and even when we ran into the swell she was very dry.
I managed to get her to run comfortably at 25 knots without pounding, and her top speed was around the 39 knot mark on flat water. She planed easily on one motor, even with three persons on board, reaching a speed of 23 knots with one engine.
I did my normal figure-of-eight test and it was as close to perfect as you could get — a clear indication that the engines were fitted correctly. That’s also why I didn’t experience any cavitation on the turns and pull-away — a perfect combination for the new 630.
The hull is very stable in the water at high speed and at slow trolling speed, and I think the weight distribution has also been done correctly.
Another change that has made a difference to her ride is the new position of the forward console. They’ve made it smaller and moved it further forward than it used to be. 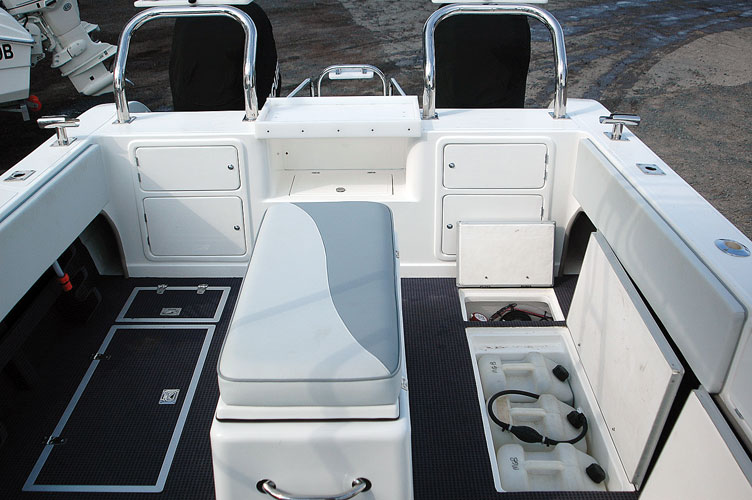 LAYOUT
Moving the console further forward has created a lot more space on the deck. There have been a few other changes too including the front hatch which used to have two doors, but now has only one solid door. This makes it much easier to get in and out of the hatch in the bow, and when travelling there’s no longer the propensity for the the doors to rattle.
An electronics hatch has been fitted in the front which is perfect for radios.
Bum boxes for the skipper and crew have also been adapted and made more comfortable, and there’s now more storage space inside these bum boxes.
The boat has been fitted with a stainless-steel T-top with extra rod holders at the top, with space for outriggers on the side.
In both sides of the deck there are nicely-fitted, spacious sunken fish hatches. Right behind them, also in the deck, are fuel hatches which can each hold four jerry cans. At the back in the deck you’ll find the pumps for the deck as well as the pumps for the livebait well. I was very impressed with how neatly this has all been done.
In the middle of the deck is a bolt-on hatch that could be used for extra storage and extra seating. If you want to go marlin fishing, the hatch can be removed and a fighting chair fitted.
Inside the gunnels on both sides there’s extra space to store more fishing rods. The gunnels have also been raised and padded so that your knees are protected when you lean against them. A livebait well and door have been fitted in the centre of the false transom, and on both sides of the livebait well you’ll find the battery hatches and some extra storage hatches. Very nicely designed indeed.
The roll bars at the back are U-shaped so that if you’re fishing for marlin they make a comfortable seat for the crew, but still leave enough space for the engines to be fully tilted up. I saw this idea a couple of years ago on my good friend Roelof Visagie’s boat. Nowadays more and more boats seem to be fitted with bars like these.
To round off the Cobra Cat 630, she has been fitted with Flotex carpets. Up front there’s foam under the carpet to cushion it, which takes a great deal of the strain off your knees and legs. Indeed, it makes standing all day a pleasure.
As always the quality of the finished craft is also top-notch. 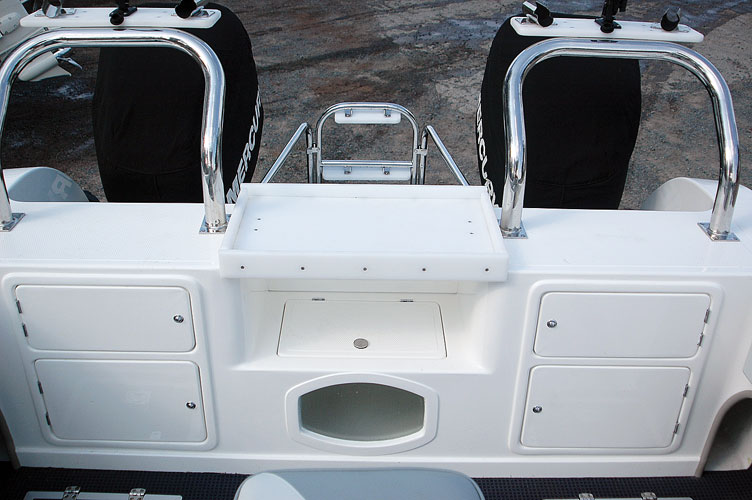 CONCLUSION
I am most impressed with the final outcome of the new Cobra Cat 630 powered by the twin Mercury Optimax engines. It’s a perfect combination and I’m sure we’ll soon see a lot more of these craft on the water.
Cobra Cats have always been very popular on the water, and no doubt with these improvements their popularity will endure for a long time.
If you’re looking for a boat of this size, the Cobra Cat 630 should be top of your list. Phone Nick and his staff at Natal Power Boats and they will gladly assist with a demo.