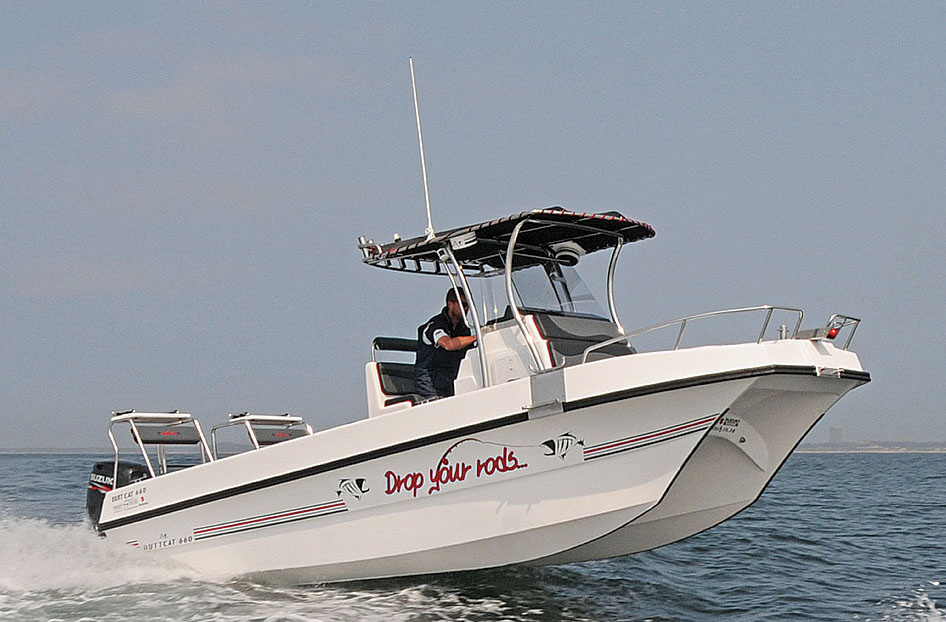 THE LAST SHALL BE FIRST!

HAVING reviewed three of Nauti-Tech’s Butt Cats on a balmy day off Port Elizabeth during the spring of 2017, I was presented with a dilemma as to which of these craft I would feature in our November/December 2017 issue of SKI-BOAT magazine. 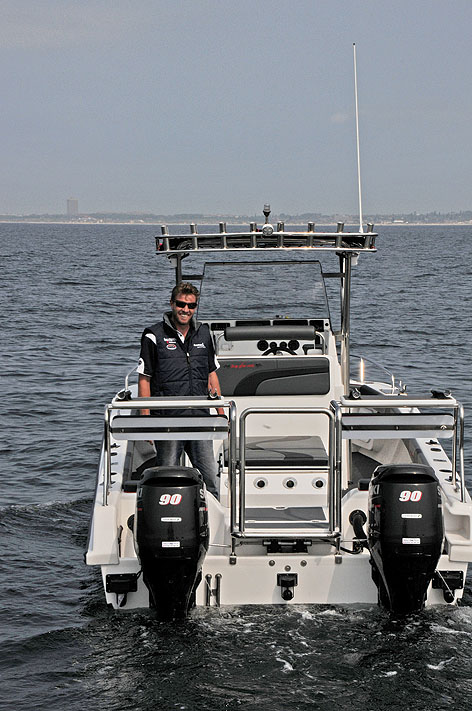 The three craft — Butt Cat 25 Yellowfin Edition, Butt Cat 930 XL and the Butt Cat 660 — are all very different from one another, both in their overall size as well as the markets they’re targeting here in South African waters.
In the end I chose to feature Fundays, the latest 25ft Yellowfin Edition, first. That decision was largely influenced by the fact that we were heading into the Cape Point yellowfin season, South Africa’s undisputed world class fishery. She is a fabulous craft with many design features specially chosen for her specific intended use as a tuna hunter.

Next up was Hooker, the 930XL sportfisher and the flagship of the Butt Cat Range. Her full review appeared in the January/February 2018 issue of SKI-BOAT magazine. Her exposure both in narrative as well as pictorially provided many of our readers with tantalising information to digest over the 2017/18 festive season.
Finally, I now get to put into print my appreciation of a craft I thoroughly enjoyed putting through her paces in the waters off Port Elizabeth.

My primary reason for exposing her third in line is that this craft falls into the six metre-plus category which appeals to both the sport- and gamefishing brigade as well as those who hunt the reef fish that are widely targeted along the east and southern South African coast starting from Richards Bay in the north to Cape Point and stretching right up the west coast to Lambert’s Bay. This latter stretch of coast has blossomed over the last decade, attracting more and more offshore boaters to the area, both as holiday makers and permanent residents.

I would hazard a guess that the class this six metre offshore ski-boat fits into is the largest, number wise, in South Africa. In essence it’s a size craft that’s relatively easily launched off the beach and estuary both for surf launching and slipway harbour operation. Boats of this size can be towed comfortably with most of the three-litre class 4×4 vehicles and fall into the price range that most ski-boaters deem affordable.
The Butt Cat 660 fits easily into this class and as I boarded her to commence my review I had the immediate feeling of being at home and comfortable. It was a feeling of neutrality, not the awe that has to envelope one, as I experience when boarding a much bigger and more opulent craft. Because the 660 is much the same size as my personal craft, I had a good benchmark to measure her against.
I was immediately taken by the Butt Cat 660 which was powered by twin DF90A Suzuki four-stroke outboard motors that were swinging 19 pitch three-bladed aluminium props. Despite having scrutinised her ride over water and apparent acceleration during the period I spent photographing her from every conceivable angle, it was only when I was aboard her with Len van Kempen and had command of the vessel that I fully appreciated how well the two Suzuki 90hp motors made this craft perform. What’s more, when I got to experience how she performed on one motor I was even more surprised and impressed.
The Butt Cat 660 is a sleek looking craft with a very distinctive, finely chiselled flowing bow and a substantial centre console with styled T-top that complemented her overall looks but still allowed easy access past the helm station to the forward fishing area. 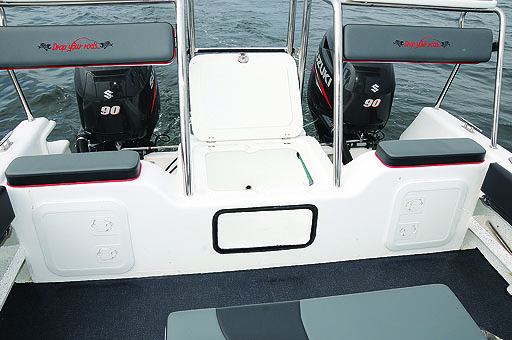 As I stated in my reviews of the other two models, on the day of the test the sea off Port Elizabeth was very flat with a long swell moving in from the south and a light breeze that barely put a chop on the water. In essence it was only by using the wake action of the accompanying photo boat that I could judge what one could expect in rougher sea conditions.

I assessed her ride at varying trim settings combined with speed to accentuate the craft’s hull ride over water. In doing so, I re-established what I had found with the other two craft I reviewed on the same day, namely how soft her ride was and how flat her forward trajectory is. In addition she also throws a very flat spray well aft as is very apparent when viewing the photographs of this craft moving at reasonably fast speeds.
During speed trials I got her to 30 knots at 5 000 rpm but she really loved riding at 20 knots with the rpm sitting at 3 700. Through the trolling range between 600 rpm and 1 800 rpm she achieved an SOW ranging from 2,5 knots to 6 knots which also produced a very flat wake ideal for gamefishing.
What really surprised me, though, was her ability to plane on one motor with the other trimmed right up. Working the port motor, she got onto the plane at 14 knots and with two of us aboard maxed out at 4 500 rpm giving us a speed of 19 knots. Using the starboard motor she maxed out at 5 000 rpm and held 20 knots at full throttle; when I backed down to a comfortable 4 000 rpm she planed at 16 knots. What this means is that, should one experience a problem far from port or beyond the backline, a safe and speedy return can be expected.
As this model of the Butt Cat range is bound to find its way into the realm of surf launching, I deemed it necessary to do extensive simulated trials with this in mind. 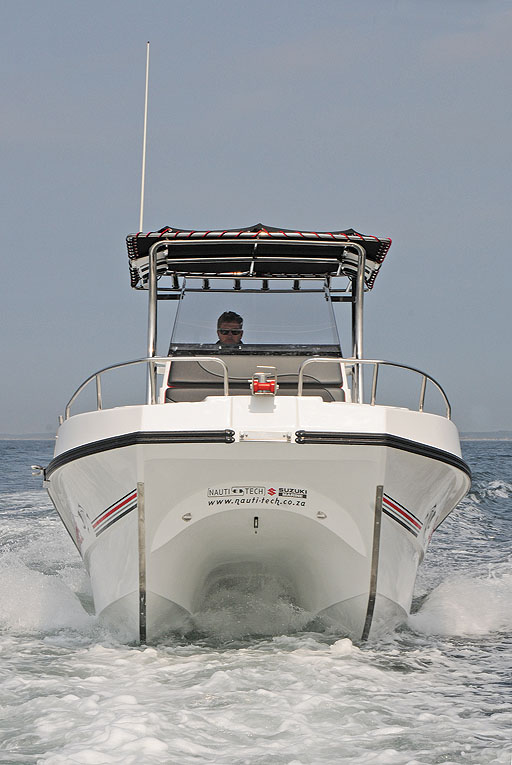 This craft likes a prone attack in a head sea, so I did not use a lot of bow-up trim during these trials and found her very responsive when going into a 360 degree turn at speed and then pulling out of the turn, by digging herself out the hole and out of trouble.
Her performance was excellent and no matter what I tried I could not get her to cavitate.
As a general comment regarding fishability, the Butt Cat’s heritage as a boat designed for the southern- and eastern Cape sea conditions and primarily bottomfishing comes to the fore. The 660 reviewed was rigged out for this arduous form of boating and fishing and her layout was perfect for that.
A few necessities/niceties that caught my eye were the quality and manufacture of the forward anchor bollard and front roller, as well as the stainless steel protection plate protecting the forward rub rail from chain and/or rope chaffing.

In addition, an anchor retrieval plate (pictured below) situated on the starboard forward gunnel will assist in the pulling of the anchor rope/chain and anchor itself for stowage in the forward anchor locker.
It’s these touches that an ardent bottomfisherman will appreciate when undertaking this dangerous task.
When looking at this craft’s aft sportfishing cockpit area, transom trolling boards and livebait well/insulated bait box, it’s obvious that anglers using this craft for gamefishing are also extremely well catered for. An interesting addition is the provision of two aft padded seats and backrests which were created by modifying the transom-mounted trolling boards. In action these are comfortable and will be appreciated by the crew during a long run home. 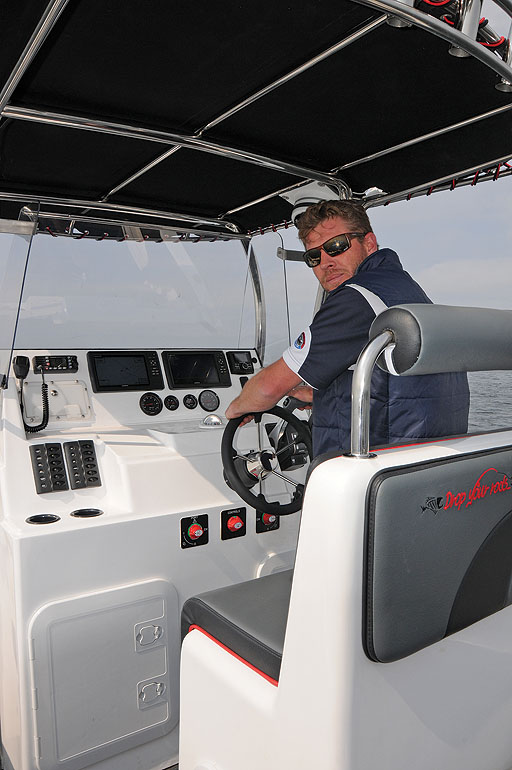 To further emphasise both the comfort and aesthetics of this craft’s layout — something you don’t generally find on a bottomfishing craft — I took note of the upholstered seating and gunnel inserts and the carpeted decking. All that tells me that the owner of this Butt Cat 660 enjoys his comfort and likes having a craft that he can be extremely proud of.
The entire helm station including its seating, its protective windscreen and its robust and aerodynamically designed T-top, combine to provide the skipper with an exceptionally well-designed, practical and comfortable “Captain’s Perch”.
Over and above the positioning of all the electronics and gauges, I found the steering positioning at a raking angle and the position of throttle controls was very practical to use even when executing extremely tight turns at good speed.

Again I must comment on the substantial windscreen and semi-side screen protectors which provide the skipper and the crew member, who has seating space next to the skipper, with a great deal of protection.
With the Butt Cat 660 I again spent an inordinate amount of time inspecting the finishes — the actual glass work as well as the hardware fitted and, above all, the extremely good stainless steel work and fittings.
The standard that Warren Rachman and Len van Kempen are achieving in this regard is extremely high and is a credit to their dedication to overcoming the “Achilles heel” that the Butt Cat had a few decades ago.
In conclusion I must again reiterate what I have tried to convey to readers who are not familiar with the Butt Cat range: their well proven on-water performance and “soft rides” are not just a myth.
Their attack stance is different to most other boats, and it took me a while to adjust my thinking in regard to the trimming of these craft to maximise power utilisation and optimise fuel consumption whilst covering distances at good speed.

I thoroughly enjoyed the craft’s ride and sea-keeping capabilities, but being surrounded by all the niceties and top class finishes made me appreciate the Butt Cat 660 to its fullest.
In short, if you’re looking to buy a boat in this category and want a serious offshore fishing craft, then make sure the Butt Cat 660 is among the craft you examine closely.