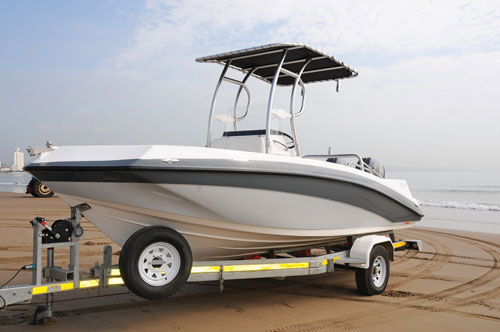 IT had been quite a while since I last had the opportunity to test a new boat so I was pleased when Shaun Lavery from Yamaha contacted me to say they were launching a new Explorer Evo 19ft monohull boat and he wanted me to put it to the test. Needless to say I grab any opportunity to test a new boat and also to spend some time with good people and friends on the water.

The Explorer Evo is built by Grantley Read and I was not surprised to find him waiting with his new baby when I arrived at the Durban Ski-Boat Club. This is the first time I’d laid eyes on the Evo and, to my surprise, it was fitted with two 70hp Yamaha four-strokes. To my mind the motors looked a little too small for the boat, but I decided to reserve judgement until I saw her on-water performance out at sea.

Ryan Hansen from Durban Yamaha, someone you can always rely on when you need a helping hand, was also waiting on the beach with the camera boat to assist Erwin Bursik while I put the new Evo through its paces. We hooked the trailer on the front of the tractor and, with Grantley Read and Shaun Lavery onboard, we were pushed into the water in front of Durban Ski-Boat Club.
Shaun took the steering first while I chatted to Grantley about the new design. He informed me that this was the first time the Explorer Evo had been put on the water and tested. Talk about confidence! This just shows how gutsy Grant is and how much belief he has in his product; not many people will put the boat in the water for the first time on the day it gets tested by a lot of different people. This was going to be a very interesting test. 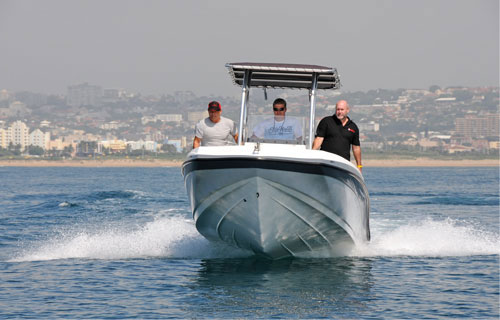 The sea was fairly calm and we headed out towards Blue Lagoon. Shaun was running both engines at about 4 500rpm and she was flying over the water. Eventually I had to remind Shaun that I needed to have a chance to steer her because I was supposed to test the boat and write this review. When I got control of the Evo I could understand Shaun’s reluctance to hand her over to me because she’s very exciting to skipper.
As I mentioned, the sea was fairly calm and I thought I would have to make her work hard to get her to perform in the calm sea. Much to my surprise she was very lively and the out-the-hole power with the two 70hp Yamaha four-strokes was amazing. Even though they haven’t played with her to ascertain the correct propping and transom heights that are needed to make her perform at her best, her performance was still very good. In fact, it’s so good that you would be able to do surf launches with her set up as is. The performance of the two 70hp Yamaha four-strokes was surprisingly good; I had obviously underestimated the power that these engines put out.

The throttles were very smooth into gear and out of gear. I made my usual figure-of-eight move to get a feel for the turning circle and to test for cavitation of the engines. I felt no cavitation even when I accelerated in the turns. The turning circle was very small to the left and to the right, and I managed to make a perfect figure of eight which is a clear indication that the engines were mounted correctly.
Bear in mind that these were new motors that had not yet been run in and were still a little bit stiff, but despite that the pull away was very impressive for a 19ft boat. I was actually under the impression I was testing a 17ft boat until Grant informed me it’s a 19ft craft. Performance-wise she has a great new design.
Her stability is something that is difficult to explain, but my opinion is that because she is wide and flatish in the transom area the stability could be felt clearly when we were running at full throttle as well as when we were doing a slow troll. There is obviously a big difference between this monohull and any catamaran hull, and I find that I just seem to enjoy the monohull ride much more these days.
I could not find any fault with her performance no matter how critical I was; her performance is flawless.

When it comes to looking at the physical attributes of the boat the Explorer hull has been changed in the front so that when you run at full throttle the water is deflected away from the boat and downwards. This means that little to no water goes up to create spray that would make it uncomfortable and wet on the boat. In the hour and a half we were on the boat I did not get any spray on me — not a drop. 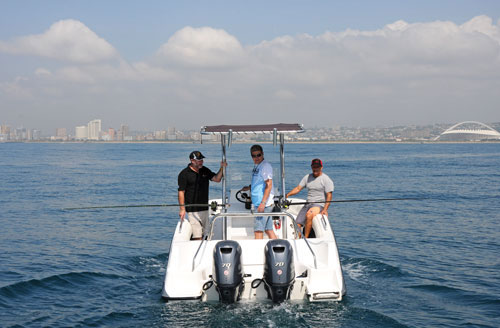 A lot of thought obviously went into designing the layout of the Explorer Evo because it is very creative as well as economical. There’s a lot of fishing space on the boat and a lot of storage space too.

This layout was created to suit both the serious fisherman and the family man who spends quality time with the family on his craft. To facilitate family fun time there’s a false transom with a roll bar, rod holders as well as a ski-rope mount at the back. On the side there’s space to load family or friends if you are taking them out to ride a tube or do some wake boarding. This platform with retractable steps also creates a lot of space for the serious fisherman and is great for those who enjoy light tackle boat fishing.

The batteries are situated in a storage hatch in the middle of the false transom. On the left hand side there’s a storage hatch that could be used for a cooler box or just to store some towels or tackle. On the right hand side there is a livebait well with a small window in the front that makes it easy to keep an eye on the bait and to see that the pumps are running. It’s enormously frustrating when you spend ages scratching around for bait, then get to your fishing ground, prepare to hook up a livebait and discover they are all dead!
Both sides of the boat are fitted with below-gunnel rod holders, and the height of the gunnels is perfect to lean against. They are also padded so that your knees do not get hurt while you’re jigging or when you’re fighting a fish. There is more storage space for rods on top of the aluminium T-top.

The centre console set up really impressed me. In front of the console there’s a seat, but if you lift this seat you’ll discover a huge hatch that opens up the whole console. This could be utilised for many things — as a fuel hatch or a normal storage hatch, or even as a space to install a porta-potty. 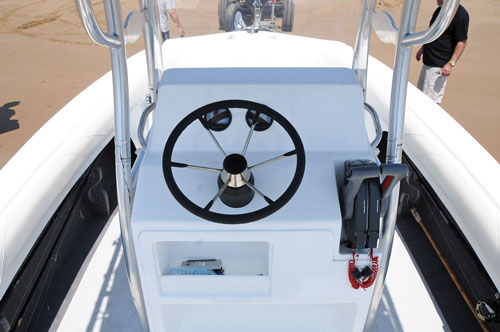 Between the console and the bow there is a fish hatch in the floor; although this hatch is not very wide, it is deep and very long. You would be able to fit a 25kg ’cuda or yellowfin in easily. In the bow there’s another seat with a hatch underneath that is big enough to contain all your extra gear and safety equipment. Life jackets take up a lot of space, but you would have more than enough room to pack them away in this under-seat space. This hatch could also be used as a platform for flyfishing. Right in the front there’s a huge anchor hatch.

Grantley mentioned that there are a couple of changes that could be made to suit the customer, so if you’re looking seriously at this boat feel free to chat to him about your preferences.
A couple of days after the test I phoned Grantley to chat a bit more about the Explorer Evo 19ft and to hear his ideas behind the design of this light and very neatly built boat. Apparently Yamaha wanted to add a 19ft monohull craft to their fleet and the Explorer’s design was the one best-suited to being tweaked to ensure it would suit the serious offshore angler as well as the angler that enjoys freshwater fishing.

Furthermore, the Explorer is also well-suited to having a single engine on the transom; it can be powered by anything from a single 100hp four-stroke up to a 200hp four-stroke. This will suit the guys that want to use the boat for fishing and skiing or wake boarding. There’s even enough space in the hull to fit an inboard motor if that’s what you prefer.
If you’re happier with twin engines you can choose to power the boat with anything from 2 x 60hp Yamaha four-strokes up to 2 x 100hp Yamaha four-strokes. Although we tested the Evo with 2 x 70hp Yamaha four-strokes, Grantley assured me that twin 60hp motors would be big enough to push this hull.
As I suspected, the reason she felt so stable is because one of the changes they have made to the hull is to flatten it out at the aft transom area. This makes the boat morestable and helps to get her on the plane faster. 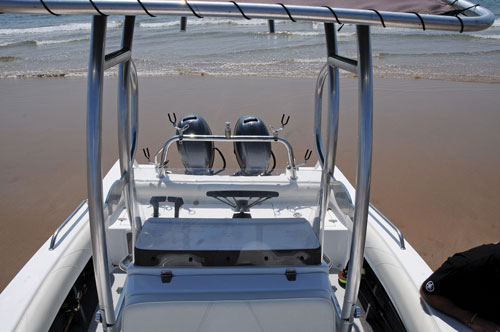 I was very impressed by the quality and design of this boat as well by the amount of storage space that has been incorporated — and the amount of fishing space that’s available.
When I was assessing the ride and performance of the Evo, the first thing that sprang to mind was that she’s a very dry boat. Her ride at full throttle and at trolling speed was perfect. I could not fault her handling in the surf and on open water; the Evo is certainly one of the more comfortable and softest riding boats I have tested.
She arrived on a single-axle galvanised breakneck trailer and the off-loading and loading on the beach was done with ease.
This is a good boat to look at seriously if you’re in the market for a monohull. My personal opinion is that this new Explorer Evo 19ft will do very well, but if you want to take a closer look at the Evo yourself, contact any Yamaha dealer.

TUNING IN ON THE PODS