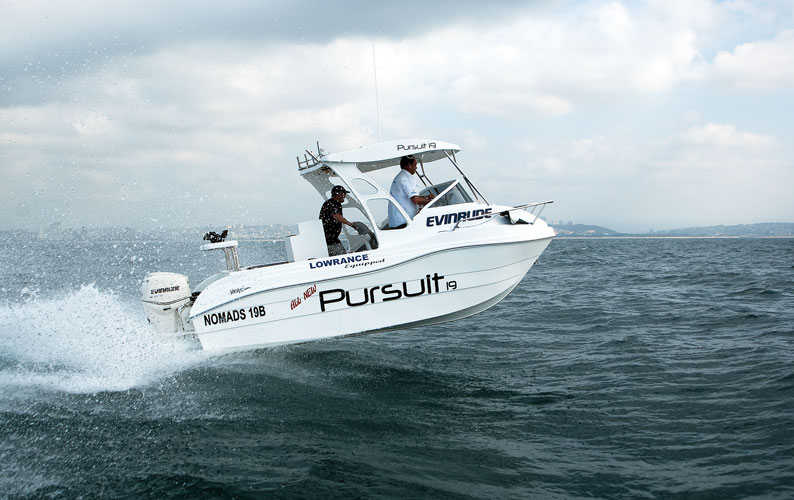 I’VE done a lot of boat tests over the past few years, but hadn’t yet had a chance to put the Pursuit 19 through her paces. She recently had a facelift, and an old friend, Wynand Wiering from CMH, called to ask if I would take her for a test.
We made arrangements to meet at Durban’s Rodand Reel Club to put her on the water one Friday morning in May, but by the Wednesday the weather didn’t look too great. Wynand offered to leave Jo’burg early on the Thursday morning and be here in time for me to do the test before the weather turned bad. He assured me that she tows well and that it wouldn’t be a problem. 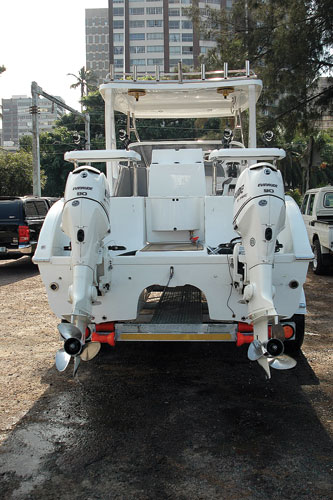 Wynand was true to his word and before 10am on the Thursday I got the call: “Hurry up, the sun is out.” I rushed down to harbourside Rod and Reel Ski-Boat Club, not knowing what to expect, but was very impressed with the sight that greeted me.

The Pursuit was still on her trailer and she looked slick, bulky and most stunning. This is certainly one of the nicest looking boats in the 19ft class that I’ve seen. It seems that in her redesign they have followed the modern trend of creating a more bulky looking boat, perhaps more rounded and much higher gunnels.

Despite the early morning clouds the weather was not too bad. A light southwesterly was blowing with clouds coming and going and the sun shining through every now and then. The water conditions were fairly flat and I had to work hard to get the boat to perform out of the norm.

The demo boat was fitted with twin 90hp Evinrude E-Tec motors with binnacle mount controls. As mentioned in previous reviews, with big engines like these you can do without hydraulic steering, but it’s not recommended. Hydraulic steering really does makes it so much easier to steer and control the boat — it’s like driving a car with power steering. These days there are actually very few boats that don’t have hydraulic steering. 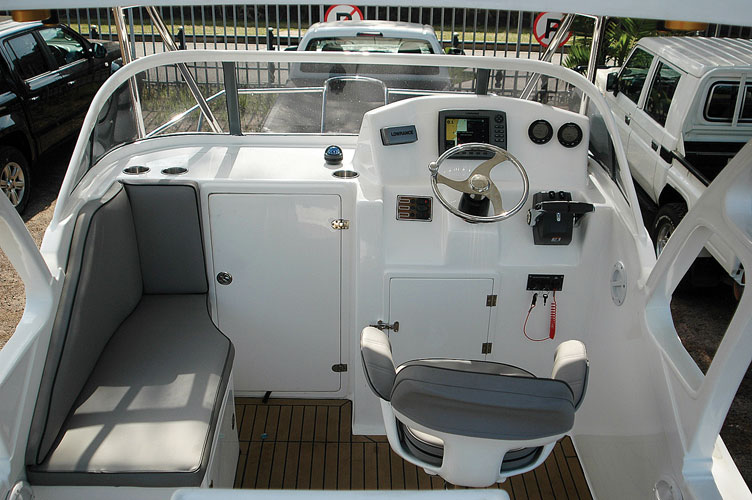 Once again the binnacle mount controls were very smooth and easy to use. The only thing with these controls is that you have to be careful when you beach: when you shift into neutral it’s so soft that you may go past neutral into reverse — and may cause damage to the gearbox. However, once you’re used to these controls they are a dream.
These E-Tec engines are some of the most fuel-efficient motors on the market and are not short on power either. The principle is the same as a 2-stroke engine, but just much more advanced. They have the same power as 2-strokes and do not have the gradual acceleration of 4-strokes — you push the throttle down and the power is there. From a standing position the pull away is very sharp and powerful. The boat was onto the plane in a flash.
Even though these were just 90hp motors they have more than enough power to push the boat on the plane with only one engine.
The Pursuit 19’s ride was very soft and dry.Running into the swell felt very smooth and soft with no pounding. When I turned around and ran with the swell she gave no indication of broaching. Her figure-of-eight turning test was also as close to perfect as you can get, which is a good indication that the motors were fitted correctly.

Even with powerful motors like these she had no cavitation on the turns, and at pull-away the power was there instantly. Turning and running with a side-on swell, once again there were no big roll movements — an indication that the changes to the hull have made her very stable.
All in all, the Pursuit 19 seems to be a very dry boat. With all the turning and twisting and running around, not once did I get water over the front or even spray on the windshield. 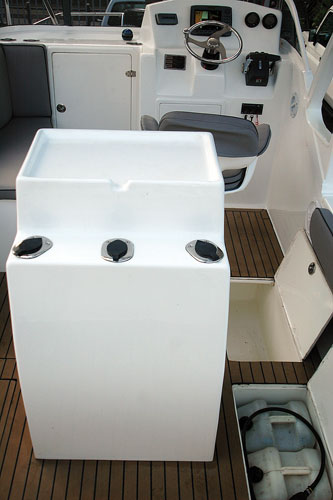 LAYOUT
Apparently this boat is much lighter than the older model, is completely wood-free and is foam-filled.
The hull is wider than the older Pursuit hull, the floor has been raised to allow for more flotation, and the whole top deck has been redesigned. They have also made the gunnels higher so that you can easily lean against them while fishing.

The windshield is glass, not perspex or polycarb, and the anchor hatch is situated right up front. They have fitted the front hatch with one big door that makes it much stronger and not wobbly.
The layout of the front of the console is comfortable with a good seating arrangement for the crew. The skipper has a comfortable chair, but unfortunately you can’t see over the console if you’re sitting down.
The Pursuit 19 now has a hard top with spare rod holders mounted to it. Outrigger mounts are on the side and there’s teaser mounting space on the inside of this hard top.
In the middle of the deck there’s a work station with extra hatches and rod holders. Fuel hatches are situated in the floor on both sides and fish hatches right behind them. There’s a livebait well in the middle of the false transom that also acts as a door onto the deck. 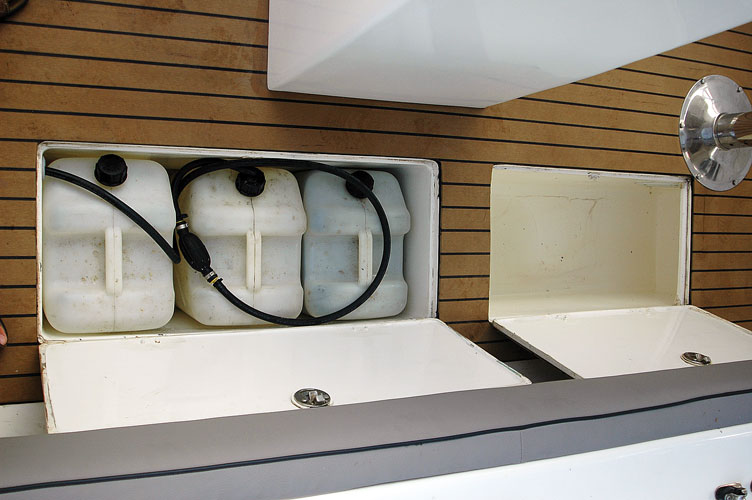 CONCLUSION
This is the first Pursuit that I’ve tested and one thing is obvious: you can certainly see that fishermen had a hand in the design and changes made to this boat. She’s very comfortable, is lighter than she was before and looks very classy. Overall, this boat has been very well designed and developed.
For her size, the Pursuit 19 has a very comfortable and stable ride, and she would be suitable for all facets of fishing.
If you’re in the market for a boat in the 19ft class, contact Wynand at CMH and book yourself a demo ride. Wynand is also a renowned fisherman so he’ll be able to give you first-class advice on choosing a boat with options that suit your needs. 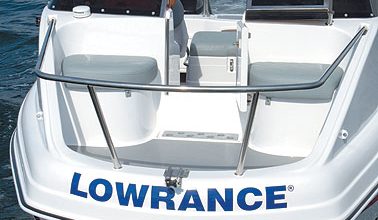