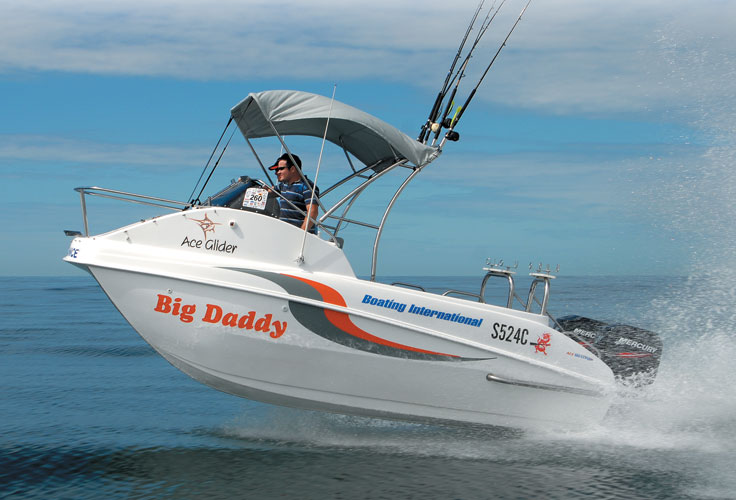 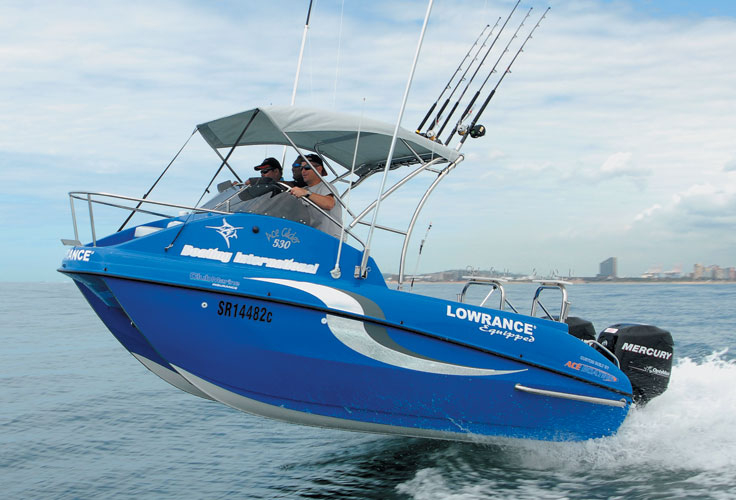 IT’S in times like this, when everybody is complaining about recession and thEe faltering economy, that one realises how much effort the boating industry puts in to manufacturing and selling boats.
Even though the economy is on the downturn at the moment, boat manufacturers and dealers keep looking to the future and do their utmost to satisfy the clients who can afford to buy a boat. Somehow, they still keep moving forward with modern trends, and still come out with some innovative designs.
Boating International is one such company. They have decided to start pushing the offshore market with the Ace Glider 530, supplied by Ace Boating, which they’ve had on the market for a while now.

I met the BI people at Rod & Reel Club in Durban Bay where they presented me with two Ace Gliders with different motor configurations.

GENERAL IMPRESSIONS
I first saw the Ace Glider a while back at Durban Ski-Boat Club and she impressed me as a craft with a very modern design — a boat for 2010. At first she looked a bit too fancy for me, but the more time I spent on her, the more I grew to like her.

On test day my overall initial impression was of a fancy-looking, very neat boat, but the question remained — how would she perform on the water? 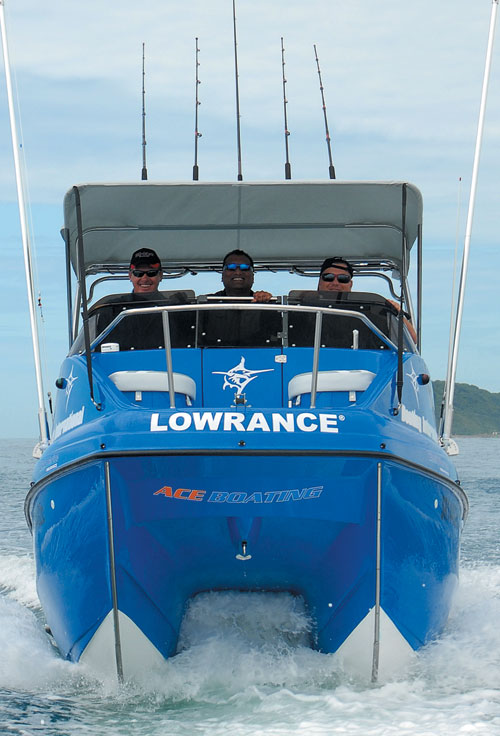 CONDITIONS
When it comes to the weather, we all sometimes curse the weatherman — some more often than others. We all love sunny, calm conditions, but when you’re testing a boat, a bit of wind and some swell helps one judge her ability.

Needless to say, you can’t have it all, and on this occasion it was a typical Durban summer’s day — steaming hot with no wind, and the sea smooth and glassy. It was too perfect, but that just meant I would have to work a little harder to test the boats properly.

LAUNCHING AND TRAILERING
The Ace Glider comes standard on a galvanised breakneck trailer. Towing these days is simple, while loading and offloading gets easier the more one does it. The breakneck makes it that much easier, espeially when getting on and off the beach.

Putting these two boats in the water in the bay was a simple task. They slid off the trailers easily, and when we came back the loading was almost as effortless. Once afloat, it wasn’t too long before Mark Wilson and I were on our way to the harbour mouth, along with some of the people from Boating International and Ace Boating.

MOTORS AND CONTROLS
The white Ace Glider was fitted with 2x90hp Mercury two-stroke engines, while the blue Ace sported 2x115hp Mercury Optimax motors. Both boats had hydraulic steering and sidemount controls. Even though, cable driven the controls were smooth and soft.

If I have to compare the motors, there was not a huge difference between them. The Optimax motors accelerated faster than the 90s and ran much more quietly. Getting more technical, your fuel savings on the Optimax motors would be 50-70% better than if you were using the normal two strokes. 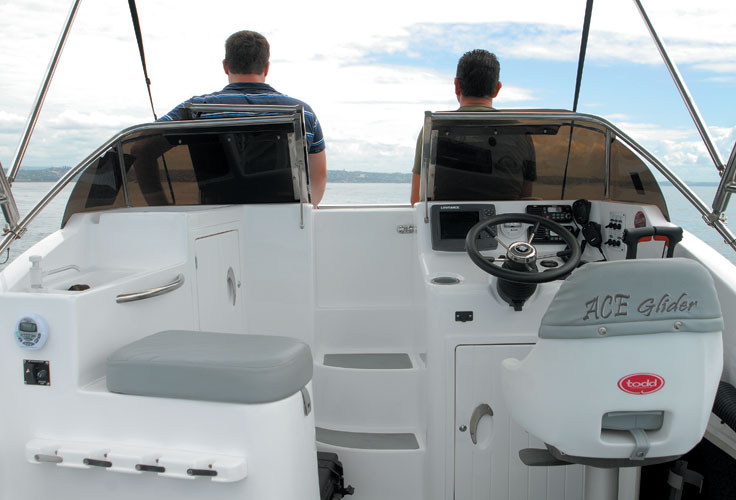 PERFORMANCE
Both these boats got out the hole in a flash and went like bullets. When it came to comparisons, the blue Ace Glider fitted with Optimax motors accelerated much faster than the boat fitted with the 90hp two-strokes.

With such flat conditions I had to push these boats hard and do elaborate moves with them to see how they would react in different conditions. We went closer to the surf to find a bit of swell, and with a following sea I did not detect any broaching or cavitation.

Sharp turns and getting the boat out the hole were accomplished with ease. At higher speeds, in these conditions we maintained a comfortable 20 knots, and I never once felt that I was not in control of the boat.

In the final analysis there was not much of a difference between how the two boats performed with their respective motors. Ultimately it would boil down to what you want and what you can afford.

LAYOUT
Most of the hull designs on the market today are similar in many ways, but this is not the case with the Ace Glider. This is one of the most interesting designs for a cat that I have yet come across.

In the stern you have a standard transom section with slightly deeper motor wells, a non-skid step-up in between the engines, a great livebait well and some deadbait holding hatches. Dual recessed cup-holders and trolling bars are situated at the back.

The gunnels are fairly high and have built-in rod racks, recessed behind the flush panelling on both sides. Ace Boating have fitted a comfortable seat for the skipper, and for the crew there are a lovely seats with some storage space inside. A few upright rod holders are situated behind the seats. There’s also a small built-in sink with a tap and a small 12v built-in cooler fridge. Some tackle drawers have also been fitted, and when it comes to stowage, there’s more than you will need.

The bow is usually the first thing that people notice about this craft. It has a bowrider style with two side seats in the front and with stainless railing all round the bow. This is a very handy feature for different aspects of fishing, but when you’re launching through the surf, just be sure to open the middle door to ensure that any curlers you hit don’t take out the door for you. Leaving it open allows the water to flow through more easily, should the need arise.
These are just a few of the features of the Ace Glider, so many it’s impossible to mention them all.

FISHABILITY
This is a very stylish boat, but also very practical. Indeed, you would be able to use it for any facet of fishing, from game- to bottomfishing. She is also very stable, and I could not fault her in any way, whether stationary or while trolling.

Judging from this, I think she would be able to handle a fairly upset sea. Just please remember to respect the sea — bravery could be your undoing — as this is not a sportfisher.

FINISH
As I mentioned before, she has a very modern design, with very good finishes to boot — everything in its place, neat and tidy and well-designed. 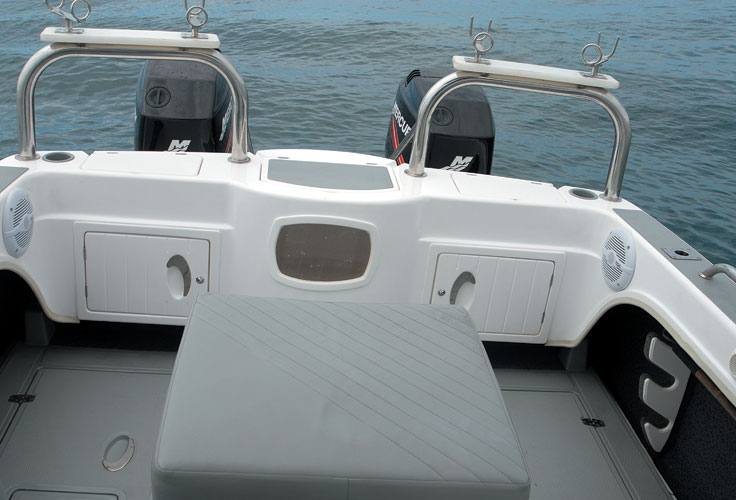 CONCLUSION
This 5.3m Ace Glider is a very practical boat which caters for all types of fishing. She stands out with her many extras and sporty features. She’s worthy of a good look at Boating International in Johannesburg where you would be able to figure out for yourself which combination would best fit your requirements. •