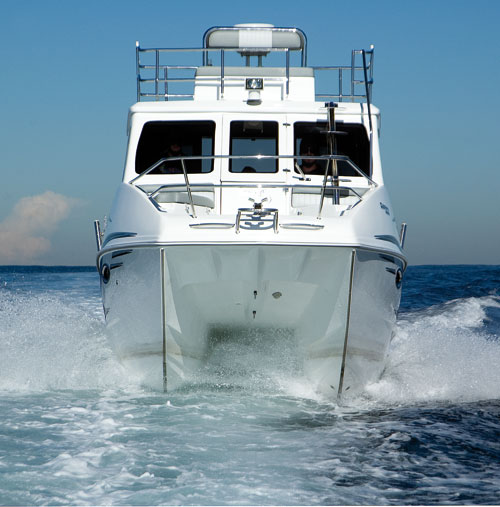 EVEN though times are tough and it costs money to develop new craft, with their customers’ needs in mind Boating International have designed and built a new Ace Glider 750 with a hard top.

Late in 2010 I tested the first Ace Glider 750 that came on the market and I loved her, so I was more than happy to put the new version through her paces. I can still recall the power and stability of that Ace Glider and I wondered how much difference there would be with the new boat. Would the ride change and would the hard top make her top heavy?

This is often one of the biggest mistakes boat builders make: they design a big boat and suddenly want to improve and add a hard top, then they over-design it and the extra weight makes the boat roll sideways. 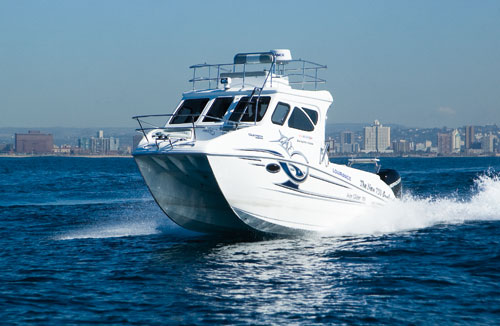 FIRST IMPRESSION
I liked the look of the original Ace Glider 750 and couldn’t wait to see what the new enclosed version would look like, so I accepted the invitation to preview her at the Durban International Boat Show. There were a number of new boats in the water, including one of the older sportfisher-like Ace Gliders — and then there was the new one. What a difference!

Most cabin-version boats on the market look similar to one another, but the new Ace Glider has a special something that makes her stand out. She obviously made a good impression on plenty of other people too, because at the show I had to queue up and await my turn to climb aboard and have a closer look.

TOWING AND TRAILERING
I can’t comment much on her towing performance, because she was already in the water when we took her for her test. I can’t compare her towing to that of the sportfisher-style Ace Glider either, because the new 750 has a cabin roof with a flybridge on top which makes a difference when you’re towing.

However, I have been told that she handles well on the trailer in traffic, and on the open road you can tow her comfortably at 80km/h. Because of her size, it’s advisable to tow her on a double-axle galvanised breakneck trailer, using a big vehicle that is able to handle a boat this size on the road.

WEATHER CONDITIONS
The weather for the test was a little too smooth and flat for my liking. When I’m testing a big boat like this, I prefer the weather to be on the rough side, but not to worry — I would just push her a little harder. 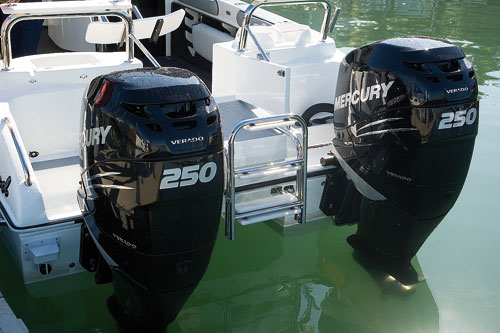 The Ace Glider 750 Enclosed that I tested was fitted with two 250hp Mercury Verado supercharged four-stroke engines. These are some of the most advanced and most powerful engines on the market.

The controls are wireless and are so smooth that you barely feel it when you push the engines into gear. These were certainly the smoothest engines I have used.

PERFORMANCE
The 750 Enclosed is a bit heavier than the earlier Ace Glider 750 models and I wondered how she would jump out the hole. I didn’t have to wonder for long. From standing still to full throttle on the plane it took around 4.5 seconds — if that long. For a boat of 24ft 9in (7.5m), this is fast. It’s even fast for a smaller boat!

I felt a little bit of cavitation on the turns and pull away, but that’s because of the vast amount of power these engines generate.

Her stability into the swell was very good, and if you ride her properly she glides smoothly over the water with no pounding. Running with the swell was also very soft and smooth.

Not once did I feel uncomfortable, even at speeds between 20 and 25 knots. Her bow stayed out of the water with no rolling motion, so clearly one of my biggest concerns — that she might be top-heavy — was unfounded. Even when we slowed down to a slow trolling speed she ran evenly and was still very stable.

I have tested boats that were so top-heavy that when a side swell hit you it seemed like you were going to tilt over, but not in this case. I was very impressed indeed. 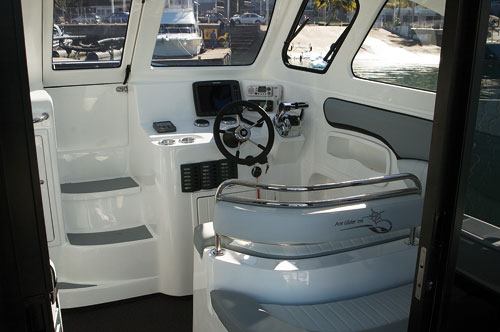 LAYOUT
Boating International have clearly put a lot of research and development into this boat and they’ve got it as close to perfect as you can get.
As with the previous Ace Gliders the750 Enclosed still has the two seats in the bow for when people want to jig or throw a plug or spoon. From there you can enter the cabin area via a door in the middle of the console. An electric anchor motor has also been fitted upfront to make it easy to pull anchor.

On the flybridge on top of the cabin area there’s a double seat with a backrest that can face either forwards or backwards. You can only access this from the front of the boat. Stainless-steel safety rails have been mounted all around, with a spotlight on the front and the back. The radar dome has also been fitted up here on the test boat.

Inside the cabin everything is in its place and there are all the bells and whistles you will need, including a fridge and a toilet. There’s also enough storage space on this boat for everything you need — and might need. The sliding door at the back of the cabin finishes it off very well.

In one side of the false transom you have your Luna Tubes and on the other side there’s a livebait well. On both sides in the deck you have nice big fish hatches as well as the fuel hatches. For the marlin fisherman this boat had been fitted with a fighting chair.

And then there’s one of the best inventions I have seen on a boat — fold-down seats under the gunnels. When you’re not using them they fold out of the way. There’s also an extra fold-up chair in the front of the cabin.

CONCLUSION
This is a very well designed boat that will suit a wide range of people, from the very serious marlin fisherman to the family man who wants to take his family on a Sunday afternoon cruise. 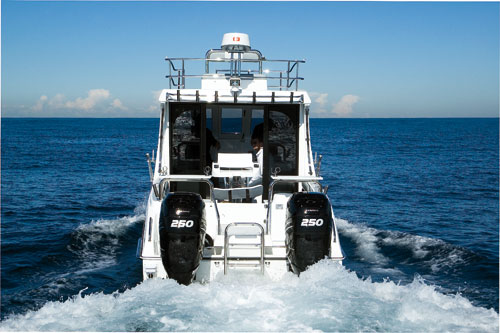 The finish on this boat is of the highest standard. She has a very modern look to her with everything you may require. Her performance is above that of a normal fishing boat and I think that the other craft in this class will battle to keep up with her. Overall I would not want to change or add anything if I were in the market for a boat this size.

Well done to Dean Levy and his team at Boating International for putting this boat on the market. In a word — superb!