LUXURY ON THE GO 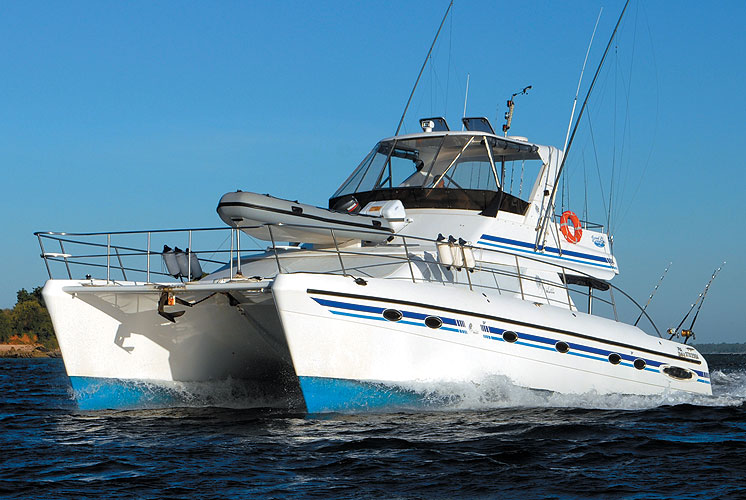 ANDRÉ Hannekom — an acquaintance of old — phoned me a while back to say he was having a new craft built in Durban for long-range fishing charters, and did I want to come to the factory to see it in its final stages of production. He didn’t have to ask twice.

As I walked into the Afri-Cat factory in New Germany, all my preconceived ideas about the craft I was about to see were shattered as the production line of new craft came into view, their mighty white prows towering above me. It was very, very impressive. Now I was anxious to see the fleet of large powercats from the stern and to climb aboard Broadbill, André’s new charter boat.

Over the next month or so I followed her progress and spent many hours on her as the finishing touches were being attended to once she was at moorings in Wilson’s Marina, Durban Harbour. Then, finally, together with Jeff Nieman, MD of Afri-Cat, his brother, Paul, and other technical staff, I was permitted to be aboard her during her maiden voyage out to sea off Durban. In modern parlance, I had “bonded” with this magnificent craft.

Broadbill then departed for her new home port of Pemba in northern Moçambique — I only wished I’d had the time to ride with her. My consolation was that I had already loaded tackle and equipment aboard her for a month or so later when I was due to spend a week on board during her first charter to Lazarus Bank (see May/June 2007 issue of SKI-BOAT).

This year, together with a few other anglers, I once again joined André on Broadbill for another exploratory trip (see page 42) and an opportunity to reassess Afri-Cats’ powercatamaran.

Angelo Lavranos — a foremost marine designer in South Africa — designed the Afri-Cat 420 ostensibly for the overseas cruising market, and the craft has proved extremely popular in that sector. Broadbill was the first of Afri-Cat’s 420s to be modified to suit serious offshore fishing for large pelagic gamefish, and its this aspect that I will cover in fair detail. 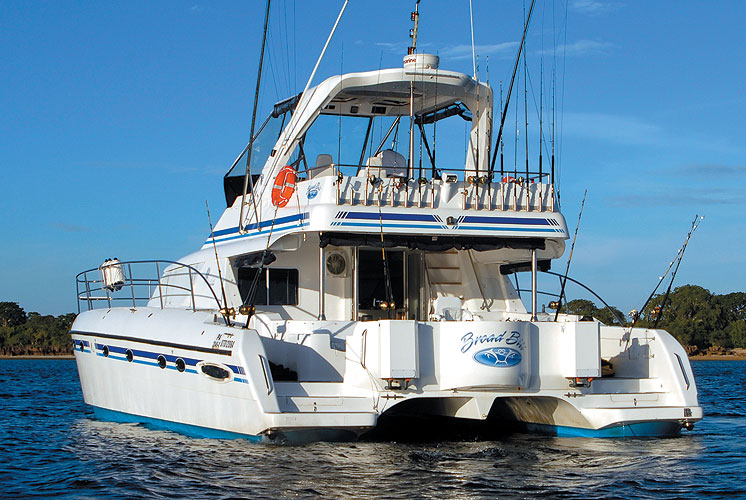 With most cruising craft and yachts, the aft ends are generally not user-friendly when it comes to sportfishing. No doubt anyone who has fished from this type of craft, like the yachts that go to Bassas da India or the local powercats that fish our offshore waters, will agree with me here.

However, on Broadbill, Afri-Cat have redesigned the transom area to create a fishing cockpit that not only works from a big game fishing perspective, but is also functional for light tackle game fishing. She has all the necessary facilities — such as livebait hatches and Luna tubes — and looks good as well, while providing a safe aft platform from which to fish.

As the bottom-line of craft of this nature is their fishability, I have purposely addressed this aspect before attempting to convey the overall luxuries onboard the Afri-Cat 420 and her sea handling capabilities.

With Broadbill’s outriggers deployed, the heavy tackle marlin outfits set in her rodholders, and lures positioned in a 5/6 lure spread, she trolls the ocean very effectively. Not only does her 22ft width allow a wide coverage, but her tight wake at speeds up to 8.5 knots also ensures that the majority of the lures in the spread are in clear water. I also found that working the deck during both the setting of the lures and during multiple hookups was practical and secure.

André recently laid some areas of Flotex carpeting on the craft’s deck. This has made a huge difference both from a heat point of view as well as to counter the slipperiness we encountered last year with the number of fish we had on the deck prior to releasing.

The Afri-Cat 420 is powered by twin Yanmar 315hp turbocharged inboard motors with shaft drives. They give her a loaded top speed of 23 knots, an easy planing speed of 16 knots, and long distance cruising speed of 8 knots. At cruising speed, with her fuel capacity of 2 400 litres, she has a great range, a fact borne out during her 2 000-odd nautical mile voyage from Durban to Pemba.

My assessment of Broadbill’s performance capabilities since my initial ride during her sea trials, then the trip to Lazarus Bank and the last cruise down the northern Moçambique coast almost to Nacala, has remained steadfast. She is a very fine seagoing craft that is remarkably comfortable in normal sea conditions. Even in the post-cyclonic seas we experienced off Lazarus, she was comfortable enough, both while fishing and at anchor overnight on the top of the bank, to enable those of us aboard to enjoy the experience without worrying about being 85 nautical miles out at sea in a relatively small craft in rough seas.

It was on this first trip that I really got to appreciate the Afri-Cat’s design and the way her twin hulls worked the rough Indian Ocean. With the cyclonic winds pushing in from the northeast — at times well over 20 knots — the run to Lazarus was with the sea on the craft’s port bow. At 16 knots she rode incredibly well with virtually no hydraulic action of hull-over-water, and the wind-driven spray that is to be expected was blown aft of both the craft’s deck as well as the flybridge. Any suck-back of spray onto the craft’s deck was limited to the aft fish deck.

On the occasions that we had to steer directly into the wind and current, I found that when we went over 16 knots, hydraulic turbulence was sometimes noticeable in the tunnel. As such we did not push her harder than was necessary. Slowing down a few knots vastly improved the hydraulic action to a point where it was hardly noticeable.

On the way back to the islands north of Pemba, with the wind on her beam, she rode fairly comfortably with no radical action of hull-over-water being experienced.

Running with a following sea was to be the big test, as this craft has no hydraulically-operated trimming devices and relies solely on her hull design to ensure that she does not dig her nose in a big following sea. André experienced some horrendous conditions on his way up to Pemba and told me countless stories of how Broadbill survived big following seas for hundreds of miles.

However, I needed to feel the craft — steering and throttles in hand — to make my own evaluation. With the strong winds and current running in the same direction, I had the swell and white caps I needed for just such a trial.

With this size craft cruising at 10-12 knots, a swell will obviously overtake her, causing her to surge forward as her stern is lifted, resulting in an apparent downhill run until the swell overtakes completely and the bow feels as if it wants to dig into the trough. This is where the hull design on the Afri-Cat comes into its own. Using the substantial buoyancy of the forward section of her sponsons, the hull lifts the front of the craft, thus preventing her bows from digging into the water. After this trial I understood exactly what André had been trying to tell me about her following-sea capabilities.

It was when this craft was cruising at low speed and was at anchor — even out on Lazarus — that her stability, especially laterally, really came to the fore. Even though she is a biggish craft in recreational boating terms, out on the ocean she is small. And yet her ride is not only very comfortable, but also gives one a strong sense of safety in a mighty big ocean.

Finally, on the performance aspect of Broadbill, what really surprised me was her low-speed manoeuvrability. Putting a craft of this size in and out of moorings, especially when the wind is blowing, can be a mission, but with her electronic fly-by-wire controls and bow-thruster, André has become very adept at accomplishing the task with ease.

However, it’s when anglers are fighting fish that manoeuvrability becomes really important. André has had an electronic gear shift/throttle binnacle mounted at the aft of the flybridge. From this position he has a bird’s eye view of the fishing deck and can manoeuvre the craft with surprising ease and speed to assist anglers who have a lively fish on the end of the line. 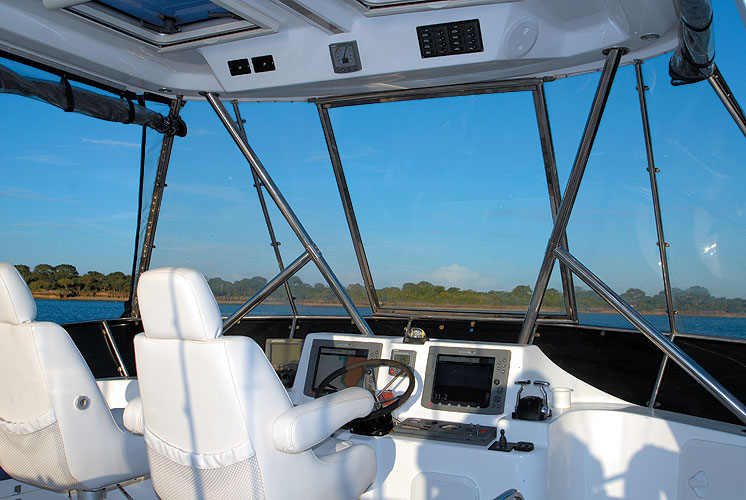 Afri-Cat’s Broadbill is one of those craft that when you step aboard to enter the main saloon, your mind automatically responds to the sight with a big “Wow!” What’s more, it’s not only the first impression, because every time I board her my reaction is the same. The opulence is prevalent in the large interior layout of Afri-Cat’s 42ft catamarans, and carries through from the main saloon to the three double-berth cabins and the bathrooms aboard.

Having now spent 14 days in total living aboard this craft with at least five other anglers, plus a crew of three, it has proved to me that the layout works as I never felt congested, experienced cabin fever or sensed the desire to change any aspect of the interior design.

Catering for the bunch was accomplished very easily by the hostess and was served on the aft deck at a table that accommodates up to six persons. Being a fishing boat, the main saloon table that could have been used for mealtimes was always being taken up by someone’s fishing tackle or people watching videos on the large flat screen TV monitor situated in the area. Another plus was that the ventilation through the aircon system removed all cooking smells from the living area — a personal bugbear of mine.

The flybridge area, where the main helm station is situated, is extremely large, effectively covering the major aft portion of the Afri-Cat 420. Apart from offering a great deal of lounging area, it also boasts a vast amount of storage space for fishing tackle and other necessary onboard requirements for long-range chartering.

André’s helm station is extremely well equipped with the latest array of Raymarine onboard electronics, including a GPS, mapping and plotter system, sonar that was reading down to 400 metres, and radar, which can also be monitored in the main saloon.

Protecting the front of the flybridge are two panels of high-impact shatterproof glass with panels on each side of these. Also, clears follow right through to the aft of the flybridge, offering extremely good protection for this area. In the heat of the tropics, the clears can be rolled up.

Access from the aft deck up to the flybridge is via a curved, wood-faced stairway that is longer than a normal sportfisher’s, yet is practical to scuttle up or down, even in the roughest of weather.

The Afri-Cat 420 is fully equipped with a a large capacity generator, airconditioning for the entire saloon and cabin area, and a 600 gallon-per-day desalination water plant. These are all essential for long-range chartering in the tropics. During the recent trip aboard Broadbill they all worked perfectly. André has got to know his boat very well, and he controls power and water usage in such a way that we were never restricted in the use of either. 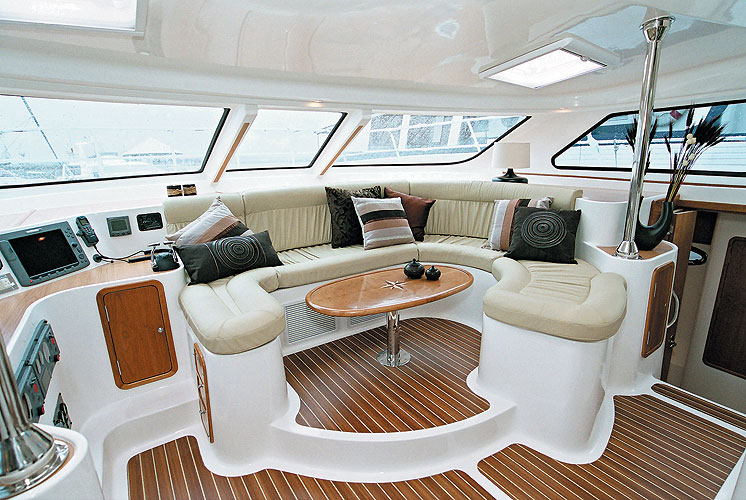 Her finishes — both interior and exterior — are of the highest order, as is demanded by the overseas luxury cruising community. The attention to detail, use of upmarket hardware and solid construction methods of both interior and exterior facilities also puts this craft in the top bracket of similar boats. At the time of the handover and sea trials, Afri-Cat Marine MD Jeff Nieman was present with his service staff to make sure Broadbill was perfect, and since then they have been extremely helpful in ensuring that this craft is continually operational in the remote area of Moçambique at Pemba.

Broadbill was customised for big game offshore fishing. In my opinion, they have exceeded the practical expectations in turning a luxury offshore cruising powercatamaran into an efficient sportfishing craft. 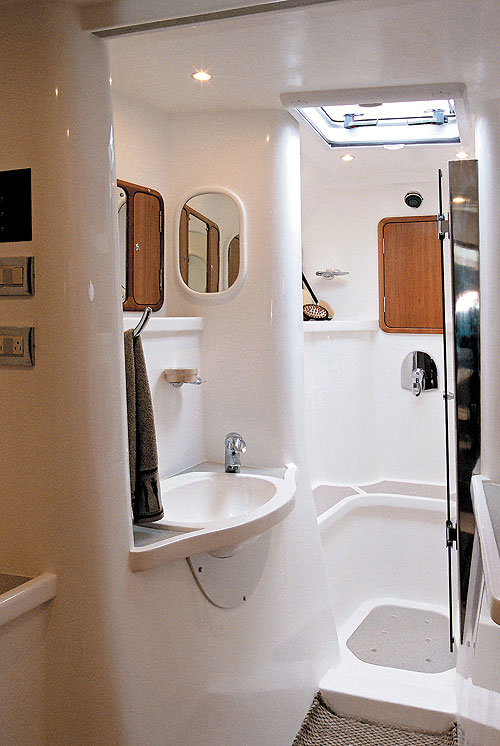 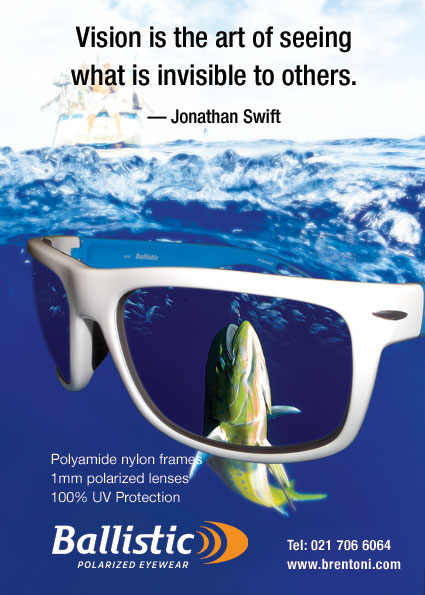 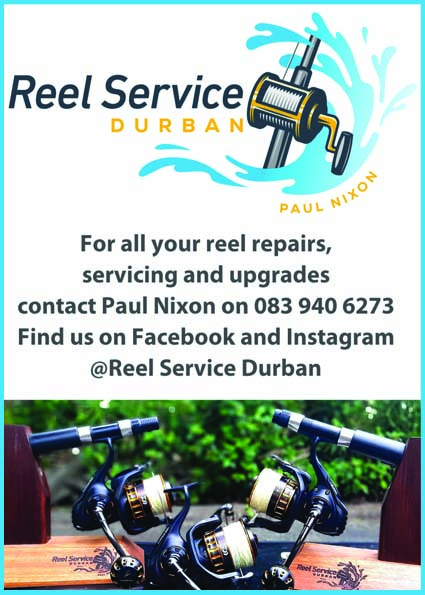