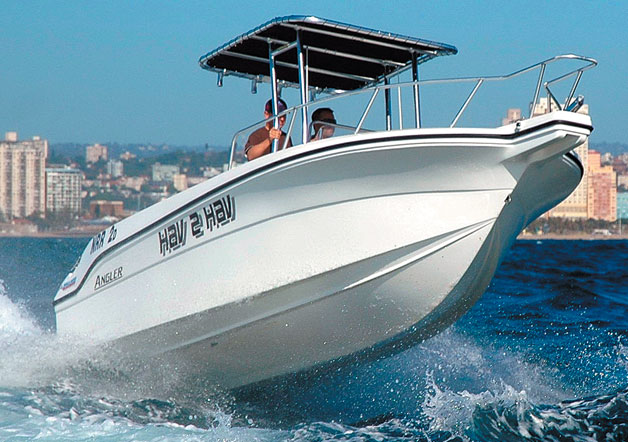 IT’S quite something to see the wide selection of new boats that Mallards Marine have available. I like it, because I get to run through their range and choose the craft for test, and the majority of the time they have what I need available at short notice.

Once again Mallards are in the news with their relocation to new premises in Sydney Road, Durban. It’s a multi-storey showroom-styled facility with everything that you need in a boating shop. It seems they have started the year off with a bang, and the new premises are sure to boost their business. (See the write-up on page 123 for further details. – Ed.) 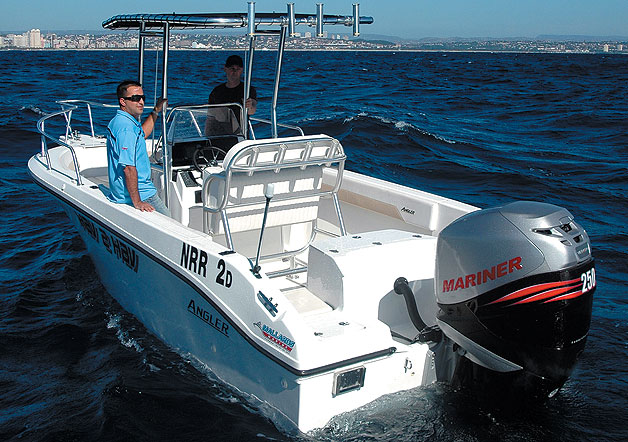 GENERAL IMPRESSIONS
The Angler 210 had caught my eye at Mallards’ showroom a while back, and my general impression then was that her lines looked well-suited to our offshore waters considering she’s an American-styled craft. After a short wait the Angler 210 literally came flying up behind us as we left the harbour, having no trouble keeping up with the Cobra Cat 800, and looking impressive at the same time.

CONDITIONS
The test was conducted on a typical Durban summer’s day, with the dreaded north-easter blowing at 25 knots off Durban early in the morning. Nonetheless, it was a sunny day and once again I was grateful for the shelter offered by the Cobra 800’s cabin. I could hide there while I photographed the Angler 210, but at some stage I would have to change over onto the smaller boat, so I knew what lay ahead for me in the rough conditions.

TRAILERING
Unfortunately I was unable to see the launching and trailering of the 210, but as she was launched off the slipway at the Rod and Reel Club, and I am positive it was a fairly simple task.

The Angler 210 comes standard on a galvanised breakneck trailer that’s sturdy, towable and apparently simple enough to use on the beaches. 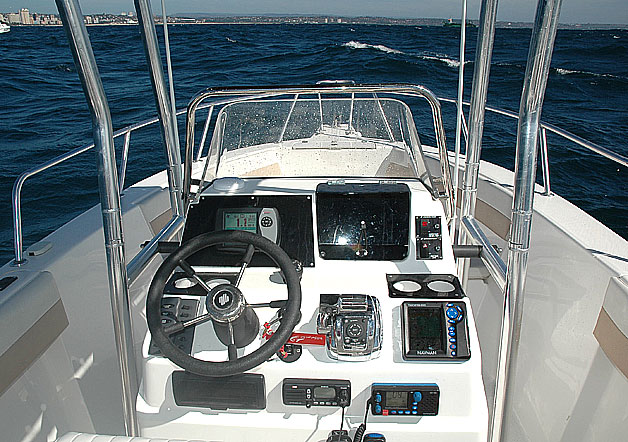 MOTORS AND CONTROLS
As tested, the Angler 210 came fitted with a single installation 250hp Verado Mariner. Most foreign monohulls have standard single motor transoms, but to accommodate the extreme conditions along our coastline and South African ski-boaters’ preferences, Mallards are in the process of producing these craft with a dual installation.

Nonetheless, the 250hp Verado supplied more than ample power for the 210. The hydraulic steering, a binnacle-mount electronically-aided control box, an assortment of gauges and extra electronics all aided in the smooth, sensitive operation of this craft.

PERFORMANCE
Generally, if you own or drive a cat hull you are more favourably inclined towards that type of craft, and the same holds true for monohull boat owners. Well, I own a monohull and spend a lot of time testing cats, and I still can’t say which one I prefer, as they each have pros and cons.

As technology and designs improve with time, I feel that many of the monohulls are once again becoming popular in South Africa, and there is no doubt that more of these Angler boats and other monohulls are going to be seen on the waters off our coastline.

In the seriously rough conditions off Durban harbour, Nick had the Angler 210 performing most impressively, and soon after the photo session I had the chance to put her through her paces to fine-tune my impressions on the craft.

Fitted with a 250hp Verado, the 210 had exceptional power out of the hole. On a single installation I think it’s necessary to overpower the boat rather than going for minimum horsepower ratings. She got onto the plane quickly and powered directly into the rough chop and swell, forcing the grumpy ocean to part away from the bow with great ease.

For a monohull in these conditions the ride was soft and surprisingly very dry. In normal easterly conditions you are guaranteed to get drenched, but the Angler 210 has a proud bow and chines that deflect the water off the hull, back into the water, and not straight out. This is quite something to achieve on any hull, I think.

Another interesting point was that I did not have to constantly tweak the trim settings to achieve a comfortable ride. Minimal trim setting was necessary, and once I was happy with the ride, I just left it there until we changed direction. Heading into the 25-knot north-easter we were able to attain speeds of up to 20 knots without killing ourselves, and slacking off the throttle to 12-15 knots gave a more civilised ride that was still very stable and comfortable. Attaining an average speed of 12-15 knots directly into a 25-knot wind is good going, in my opinion.

When I swung the 210 side-on to the north-easter, she again gave a good ride where you could edge up on the speed. To eliminate the slight side spray, I moved my crew over to the leeward side of the console and lifted the bow slightly on the trim. Side-on to swell and chop you generally get varied amounts of roll. In this case I found the 210 held firm with no major roll. 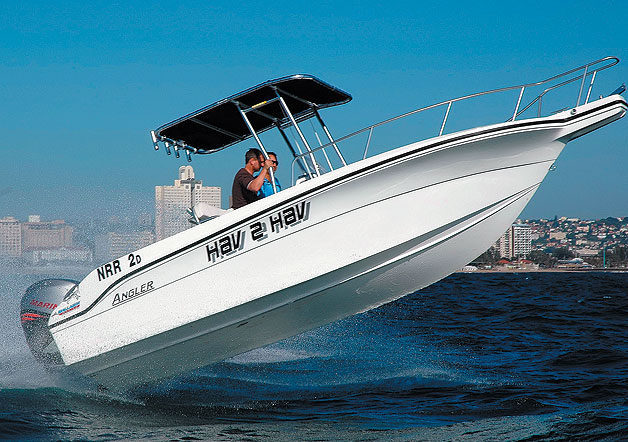 Turning and running with the swell and chop in these conditions might well have caused a craft to broach and plough, but again I was impressed at how the Angler 210 handled, remaining consistently dry and stable. Having the ability to accelerate with power in and out of the troughs in the correct manner can prevent the majority of broaching on any craft that may have the tendency to do so.

At 21’6” (6.55m) long, the Angler 210 is well-suited, size-wise, for launching through the surf on the South African coastline, but there are other aspects that affect this ability too. Although by this stage of the test the 210 had already exceeded my expectations, I still decided to put her into some full-lock turns from stationary and at medium speeds to simulate surf launching.

I found the turning circle to be much tighter than on dual installations, and cavitation was minimal. This is important for quick getaways in the surf zone.

As previously mentioned, the 210 powered into the swell and chop with great ease, and I can only presume that pushing through sizable white water in the surf would not be an issue for her either.

LAYOUT
Here you have a craft with a general layout that suits the deep sea angler, and is comfortable enough to suit the family’s needs. Incorporated into the Angler 210 is a host of features, including a swim platform with ladder, a raised live-well with tackle drawers, aft jump seats, two below-deck fish hatches, a non-slip deck finish, a spacious console including an assortment of features, and a T-top with rod holders. The double console backrest also converts into a double seat, there is a fish/stowage hatch in the bow as well as an anchor hatch, there’s an assortment of extra fishing rod holders, rod racks and many other extra features.

What I especially liked were the aluminium instead of stainless-steel finishes that complement the layout. Although the Angler 210 has all these extras, space has not been compromised in any way at all. 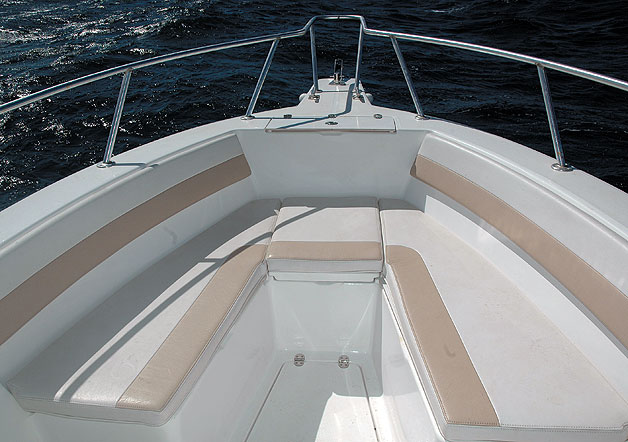 FISHABILITY
The 210 offers comfort, stability and space — three important aspects of a good fishing craft. Being a centre console, the 210 suits all fishing applications. The gunnels are high and serve as a stable area to lean up against when fighting fish or working spinning tackle — and even flyfishing.

The stability on the 210 was equally good when we were on the move and when drifting.

At high and low troll speeds I found it fairly easy to maintain straight tracks, although you had to take into consideration the poor conditions. Bear in mind you would not normally be fishing on a day like this, unless you were trying to stay away from chores on the homefront or were in serious trouble with the wife!

Stability at these speeds was good, and I have no doubt that fishing in calmer conditions would be a pleasure off this craft.

All round I found her to be a spacious boat with most of the necessary fishing features already installed, although you can always add on extras to suit your personal preferences, if need be.

FINISH
For a monohull the Angler 210 is in a class of her own. Top quality fittings and trimmings are evident all round on the craft, complementing her flashy looks and giving her an all-round good finish.

CONCLUSION
The Angler 210 is a manageable size whether you’re planning on fishing local offshore waters or prefer freshwater venues. Her modern looks and many extra features will turn heads wherever you might be. At this size she is a great all-rounder for the family and can be towed with a standard 4×4, even over long distances.

In addition to the Angler 210CC, Mallards also have many other Angler models available which I am looking forward to testing in the future. So, if you’re an avid monohull fan, give one of these a test.

And if you usually prefer cats, take her for a test anyway — you might just be very pleasantly surprised.•