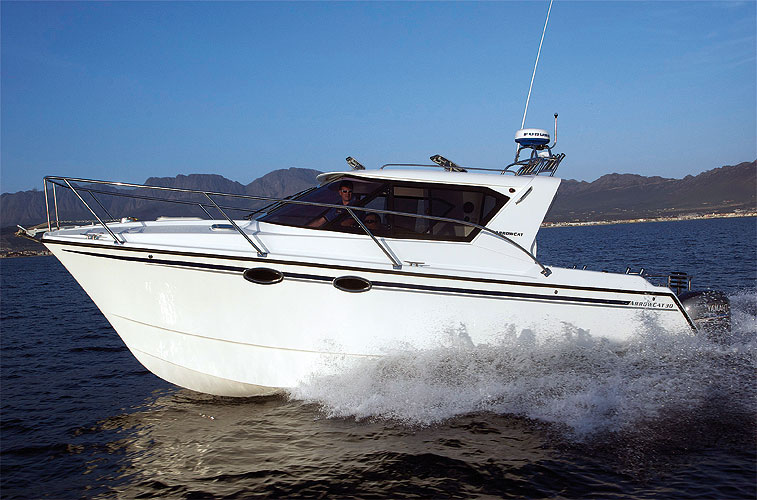 IT’S nearly a year since I sat down with Ernie Magson from Magson Marine for a cold one when he told me he had plans to import a boat from a USA-based company called ArrowCat. I wasn’t surprised that Ernie was getting further involved in bigger boats, because he’s built some big boats at his Somerset West factory, including the mighty Titan.
The words “bigger, better, and more comfortable” stuck in my mind as Ernie gave me a run down of his ambitions for his company that specialises in the upper-end of the offshore market.

In October last year I was back in Gordon’s Bay, waiting for Ernie to arrive at the harbour with his new craft so that I could take some pictures of her on a sea that looked like a lake. My turn would come the next day.

It is extremely difficult to get a big boat like this to perform for the photoshoot in completely calm conditions, but we all like a challenge, so I was ready to give it a go behind the camera, while Ernie put her through her paces.

Over the past few years my visits to Cape Town have been dogged by bad weather, especially heavily overcast skies. This time it was different. Other than the “table cloth” being dragged over Table Mountain by gale-force south-easterly winds earlier on, by the time I reached Gordon’s Bay the wind had died down completely and False Bay was as flat as a mirror. 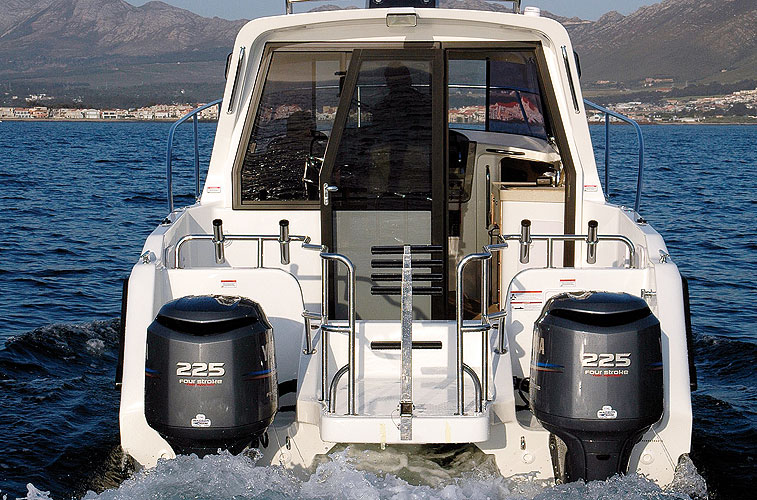 When the ArrowCat 30 arrived, my first glimpse of her gave me goosebumps. I could immediately see why this is the kind of craft Ernie would like. There are some similarities to the Titan he built locally, but there are also a number of differences, some more obvious than others.
Melvin Victor from Magson Marine and I jumped onto a smaller craft that we were using for the photoshoot, and waited for Ernie to put the big ArrowCat into the water. We had ideal sunlight and very calm conditions, so the photoshoot went off without a hitch while I made Ernie do all the hard work, getting her to perform for the camera — a little out of the ordinary.

I couldn’t wait until the next morning when I would have a chance to put her through her paces and take her around Cape Point to the Cape Town Boat Show where thousands of people would have the opportunity to view this stunning boat.

The next morning we met at the mooring at 7am, the seas even smoother than on the previous day. It seemed like the weather gods were going to look after us for the six to seven hour trip that lay ahead.
We cruised out of Gordon’s Bay aboard the ArrowCat and headed straight towards Simon’s Town where we were due to pick up two potential customers who were interested in buying a luxury craft like this. Halfway across the bay I took over the helm and made a couple of turns to starboard and then to port. There was absolutely no cavitation, and her small turning circle has to be seen to be believed.
I was amazed by the stability of this craft. Even though we were cruising at 30 knots and the swell was coming from the left, we didn’t feel a thing, and nor did she roll at all from one side to the other.

The ArrowCat was equipped with a Furuno combination unit that was set for Simon’s Town, and it was spot on every time after a turn.

This particular ArrowCat 30 was fitted with 2 x 225hp Yamaha 4-stroke motors. These days, the new, improved 4-stroke motors run cleanly with no smoke or smell and with almost no noise, so I had to turn around every now and then to see if the motors were actually running
With the ArrowCat being a 30 foot cat, one would assume that she is heavy, but I had no problem getting her to jump from a standing position straight onto the plane. It was amazing to feel the power of these engines in my hands, allowing the boat to ride the waves smoothly, seemingly without effort, easily retaining her composure and elegance.

That was the impression I gained when viewing her from another boat, and it did not change once I was behind her wheel. In fact, if I were to highlight one aspect of her performance that impressed me the most, it would undoubtedly be this evenness and apparent ease with which she rides whatever is thrown at her. It was wonderful careering along with relatively flat water firmly on the stern. With the rev counter showing 4 200 rpm and the GPS 30-plus knots, I was really enjoying the ride, getting her feel and seeing just how her hull worked the moderate but flat side-on swell.

In the cabin I could get a good feel of her hull-over-water movement and could definitely concentrate far better than I could on many of the other boats of this nature that I have been on. We soon entered Simon’s Town harbour and picked up the potential customer and his son. We left straight away and Ernie put the client at the steering. Now I had time to gauge the ArrowCat’s ride with somebody else at the helm.
We went straight into the swell at a speed of 28-30 knots. As we approached Cape Point I could feel that she was starting to hit the water a little hard, so I recommended that the skipper reduce her speed to around 20 knots. What a difference — now she glided through the swell. That was a clear indication to me of the difference between an experienced skipper who spends a lot of time out at sea on different boats, and a skipper who goes to sea for the love of it only when he has the time.

I’ll reiterate a strong view I have about the difference between good skippers with good boats and cowboys with broken boats: there is an optimum cruising speed that allows one to get to one’s destination comfortably and in reasonable time, without subjecting the craft (and crew) to excessive and unnecessary stress. This speed varies from craft to craft and sea to sea, but a good skipper will soon find the “comfort zone” and ride it accordingly. 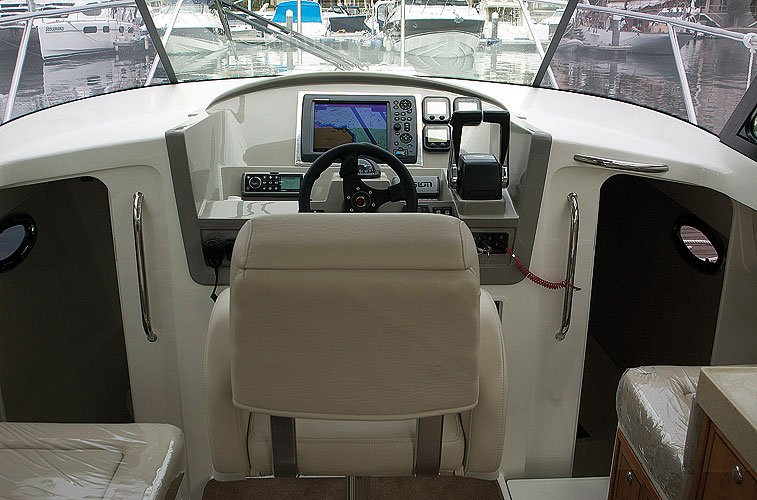 The ArrowCat 30 reacted surprisingly well to the trim of the twin 225hp Yamaha 4-stroke outboards. Normally a cat this size adopts the “designed ride” built into the sponsons, but with this craft, trim adjustments — both bow-up and bow-down, as conditions dictated — made for a distinct improvement in ride, revs and SOG. We tried not to run her too hard because the motors were still being run in, but after we went around Cape Point we were cruising comfortably at 30 knots — actually too comfortably, because I nearly fell asleep while sitting chatting to Ernie.

Once in Cape Town harbour, reversing and mooring manoeuvres were also simple, especially with this boat’s turning ability. Mooring a craft this size with outboards, bow into the wind, is virtually impossible, and yet Ernie made it look so easy. This was evidence of a great bit of seamanship, co-ordination with the crew on the mooring jetty, and the fact that the ropes were already set and tied to the correct length.
Looking at the ArrowCat 30 as a whole, she is big enough to use as a fishing vessel and luxurious enough for entertaining guests. I was most impressed with the high standard and quality of the mountings and fitting of the equipment.

Binnacle mounted controls and a full range of instruments and electronic accessories make up the good-looking, very practical skipper’s domain. On both sides of the steering, there are seats for crew to keep the skipper company. On the right side of the console there are some cupboards and a fridge, as well as a washbasin and drawers to store all the cutlery and kitchen equipment. 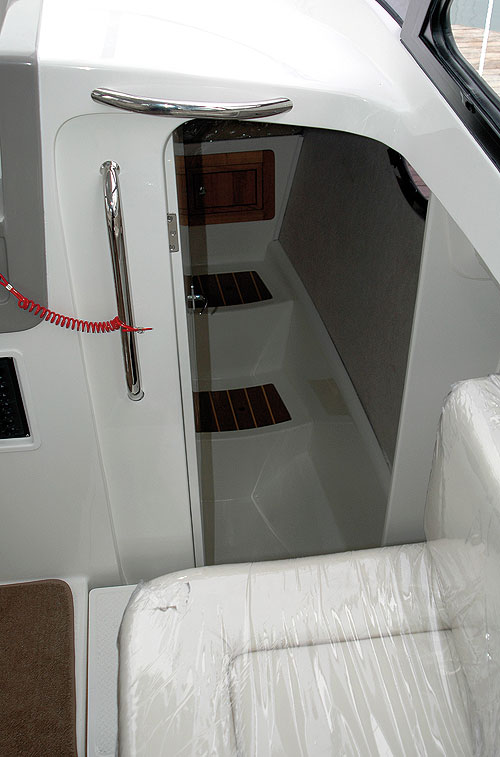 In the middle of the cabin there’s a foldable, removable table with a comfortable, L-shape seat surrounding it. I can imagine hosting wonderful parties on this boat at moorings.

Access to the forward cabins and downstairs single rooms is provided via a protected hatchway into each sponson. The ArrowCat 30 has a lovely built-in toilet, there’s a big double bed cabin in the front of the craft, and there are single beds in the port and starboard sponsons. After we had lunch in Hout Bay I had a siesta on the port side bed. It was so comfortable that I fell asleep within a few short minutes, and I only awoke when we entered Cape Town harbour.

When you move to the fishing area, it looks smaller than it really is. If you stand on the mooring and look at the boat, the fishdeck seems small, but once you’re on the deck you’ll be amazed how big it really is and how comfortable it is for fishing. 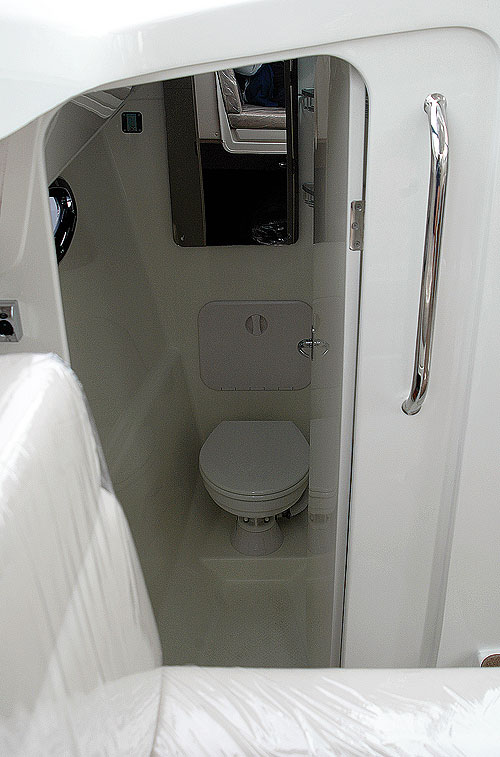 There are two huge fish hatches on the ArrowCat 30, one on each side, and towards the transom there’s a step that would be ideal to stand on when fighting a fish, making it easy for the angler to keep the line away from the engines. Between the motor wells a transom gate provides access to a swim platform and ladder that should come in handy when the craft is used for partying or diving.

A lot of thought has gone into making the craft as practical as possible, ensuring she has both attractive and user-friendly finishes and is ultra-luxurious. It’s hard to describe in a few words what I mean by “luxurious”, but Ernie and his staff have, over many years, found out what we South African offshore fishermen like in the way of tackle stowage and finishes, and have found perfection in this imported beauty. Simply put, they look good, don’t break and are easy to clean after a long, hard day’s fishing in rough seas.

This is one of the more modern craft that I would think is worth looking at if you want a vessel for hard fishing, but also a luxurious craft for spending relaxing times at sea or at the dock, with friends and family. The ArrowCat 30 not only provides more spacious accommodation, but is also able to take on bigger seas, fish harder and provide a much bigger fish deck with greater capacity fish hatches than some similar craft — plus she’s good looking.

Indeed, what more could you ask for in a boat?