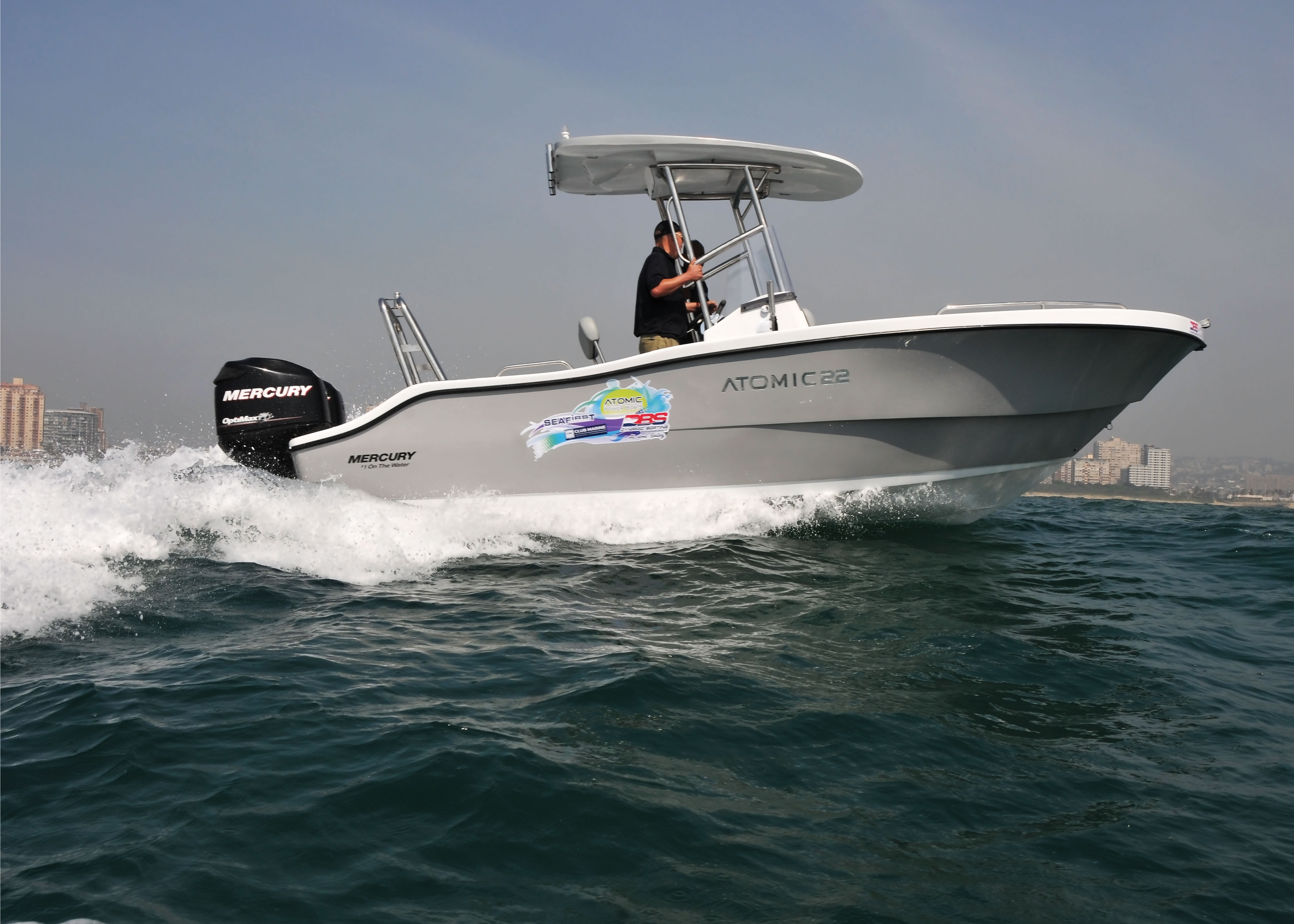 Duncan of Atomic Power Boats arrived at Durban Rod & Reel Club’s slipway following a long tow up the coast from the Cape with his new Atomic 22 hitched behind his Ford Ranger. What a stylish entry this large monohull made to impress those of us eagerly awaiting her arrival. This sleek, almost racy craft in her centre console configuration and light grey and white linage looked stunning as she nestled on her tandem axle trailer, ready to be launched into Durban Harbour. My long-term habit is to slowly walk around the craft I am about to review, oblivious to manufacturers, salesmen etc. — just getting a feel for and absorbing the look of the craft. As I run my hand along her side marginally above her waterline, I not only feel the craft’s shape, but also note the external finish and smoothness of her gel coat and flow of her moulding. 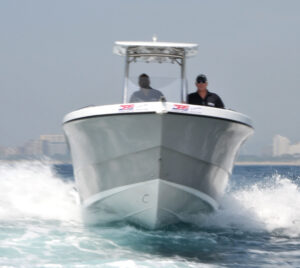 My immediate impression was just how perfect the Atomic 22’s mould must be to produce such a superb external finish. Before we got on the water, Kevin explained his interesting road to becoming a boat manufacturer. With a life-long love of boating and offshore fishing, he changed his successful commercial career a few years ago and began to engage in producing an offshore ski-boat that he envisaged would suit his exacting needs and would be a craft that he himself wanted to own. Experience, research and an incredible amount of hands-on work resulted in the Atomic 22 I was about to review.

The craft was powered by twin Mercury Optimax 125hp motors swinging 15 pitch props that purred as they gently pulled the Atomic 22 off its trailer into the calm waters of Durban Harbour. This sleek monohull, with three of us aboard, soon exited the no wake zone, and as I applied power she got up on an easy plane as we headed for the harbour entrance and out to sea. With that power behind us, I couldn’t help reminiscing about the feel of the same size mono that had been my own craft for nearly 20 years — happiness! The hull cleanly sliced through the ocean’s surface as I opened the throttles to exit between Durban’s piers and take on the inevitable chop that persists as bay water pushes out and meets the surge of open ocean. I was thus able to begin to get her real feel as she used her sharp entry and aft stabilising wetted area to produce an effortless ride at around 18 knots. Out at sea off Durban’s beachfront, I had to contend with our dreaded south-easterly wind and the ocean swell it produces. Conditions were not that great for a day on the ocean, but were good for extracting any “ride” faults a craft may have. For nearly five hours I rode and observed the Atomic 22 while photographing her as well as skippering. I was enthralled with the way she performed. I feel eminently qualified to write on this hull’s performance, as I was intermittently aware of the faults and benefits of the 21ft mono I owned and used extensively under these sorts of conditions. Kevin’s Atomic 22 was going to be put through its paces with the comparison constantly foremost in my mind. Perhaps that was a tad unfair, but if she compared favourably with my old mono she would be one hell of a craft. 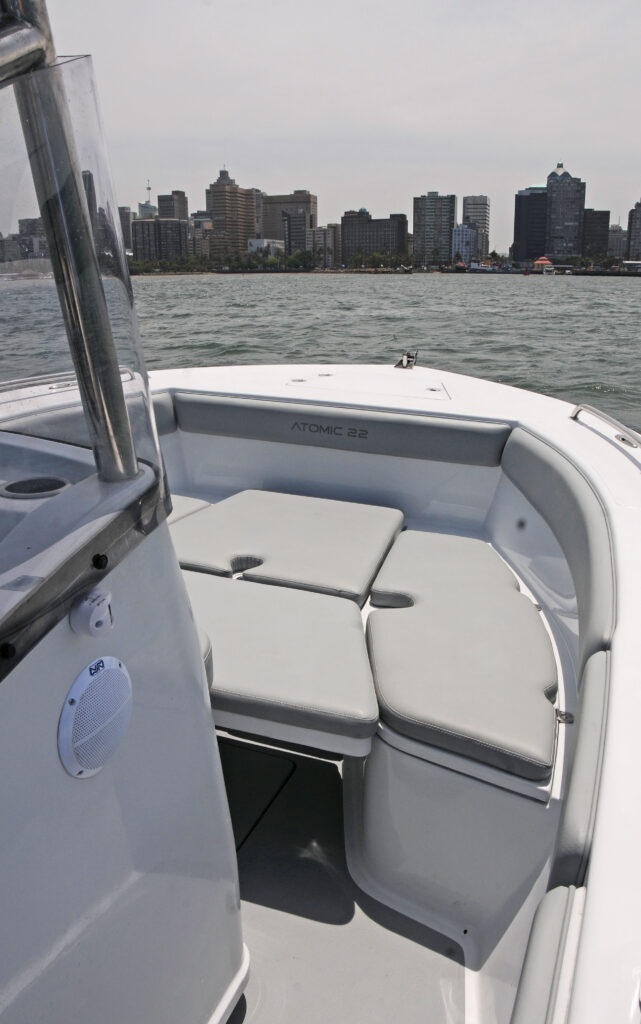 To cut to the chase, the Atomic 22 did admirably, and Kevin’s clever design of the shoulder entry, her wide beam and the aft stability has largely overcome most of the quirks I experienced with my Robcraft. I place great value in watching a craft’s over-water performance while I am photographing her. This, together with reviewing the hundreds of photographs I take in enlarged format on the computer, details exactly how a hull handles every conceivable condition the ocean throws at her on that day, and provides me with a huge amount of information. Having gleaned this information

from watching her, I then re-board the craft and put her through a huge range of trials to correlate actual feel with what I have visually noted. I don’t like to compare monohulls and twin-hulled craft because a mono’s ride has very distinct differences to that of a cat, most notably the entry and lateral stability when it comes to on-water performance. What I preferred to do is compare the Atomic 22 with my old mono in describing the vast improvements that Kevin has achieved in his design of this craft. The Atomic’s entry into the short sharp chop is impressive and, once on the plane, her wetted area aft design significantly increases her lateral stability to the extent that minimal motor trim is required. This aspect was well tested during a long run up the coast with the wind and chop on the craft’s aft beam. I was very pleasantly surprised. 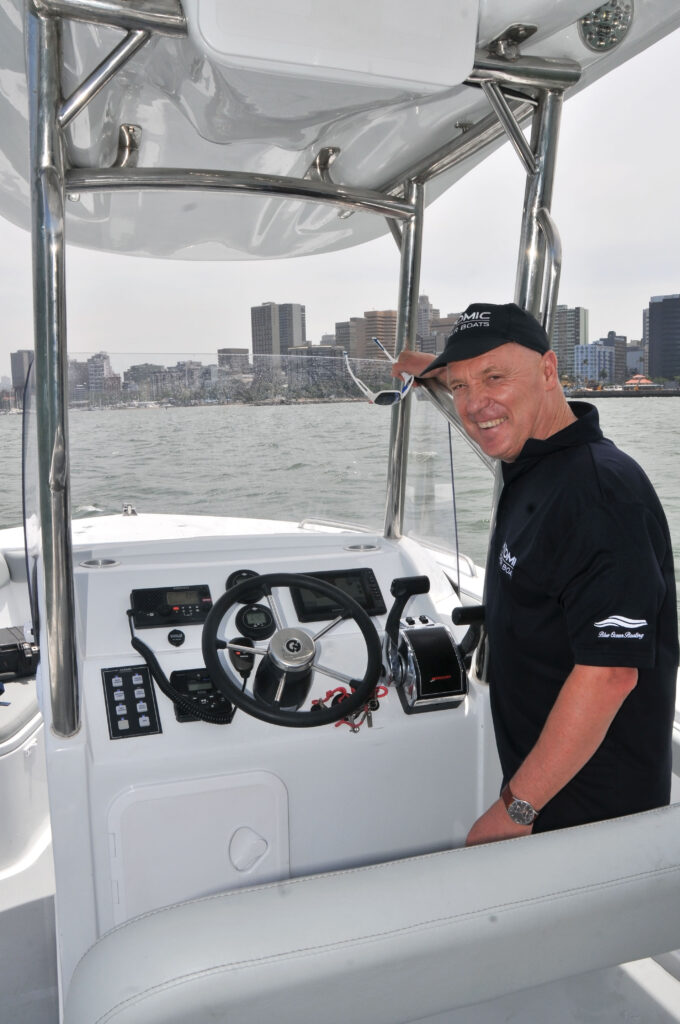 On a fast plane at 20- to 23 knots this craft literally flies. At these speeds the Atomic 22’s hull design fully determines her stance over water, and minimal if any bow up/down trim is required or effectual. Another aspect that has been incorporated into the Atomic 22 is the aerodynamically designed T-top that, in addition to looking stunning, has very little adverse effect on the craft’s ride. I found that very interesting and somewhat surprising. Lateral stability during regular fishing needed to be inherent in the aft hull design, because with the motors positioned very close together, correcting trim is ineffective unless you’re travelling at fairly high speed. On the Atomic 22, at troll speeds up to 8 knots with three of us aboard moving freely around the deck, there was no need to try adjusting lateral stability using the motors. Having her motors close together provides her with a very tight wake at troll speeds up to 7 knots and therefore provides a lot of clear water to run lures while fishing for marlin and sailfish. Talking about marlin fishing, when I tried backing up after first — and most importantly — trimming out her motors a fair amount, the Atomic 22 reacted well and I could adjust my speed to avoid excessive water pushing up onto the deck over the neatly designed motor well.

Finally, with regard to performance, her natural bow-high stance during simulated surf work was an asset. On turns in fairly big swells I was able to force her into full lock turns and out the hole acceleration very easily and with no excessive torque on the steering. Furthermore, minimal cavitation was experienced. The twin 125hp Mercury Optimax motors provided more than enough torque and speed, not only out the hole, but also to get her quickly up and running in no time following the slowdown after jumping a crest. Kevin put a huge amount of thought into the entire deck layout and facilities, and in fact that’s an understatement. 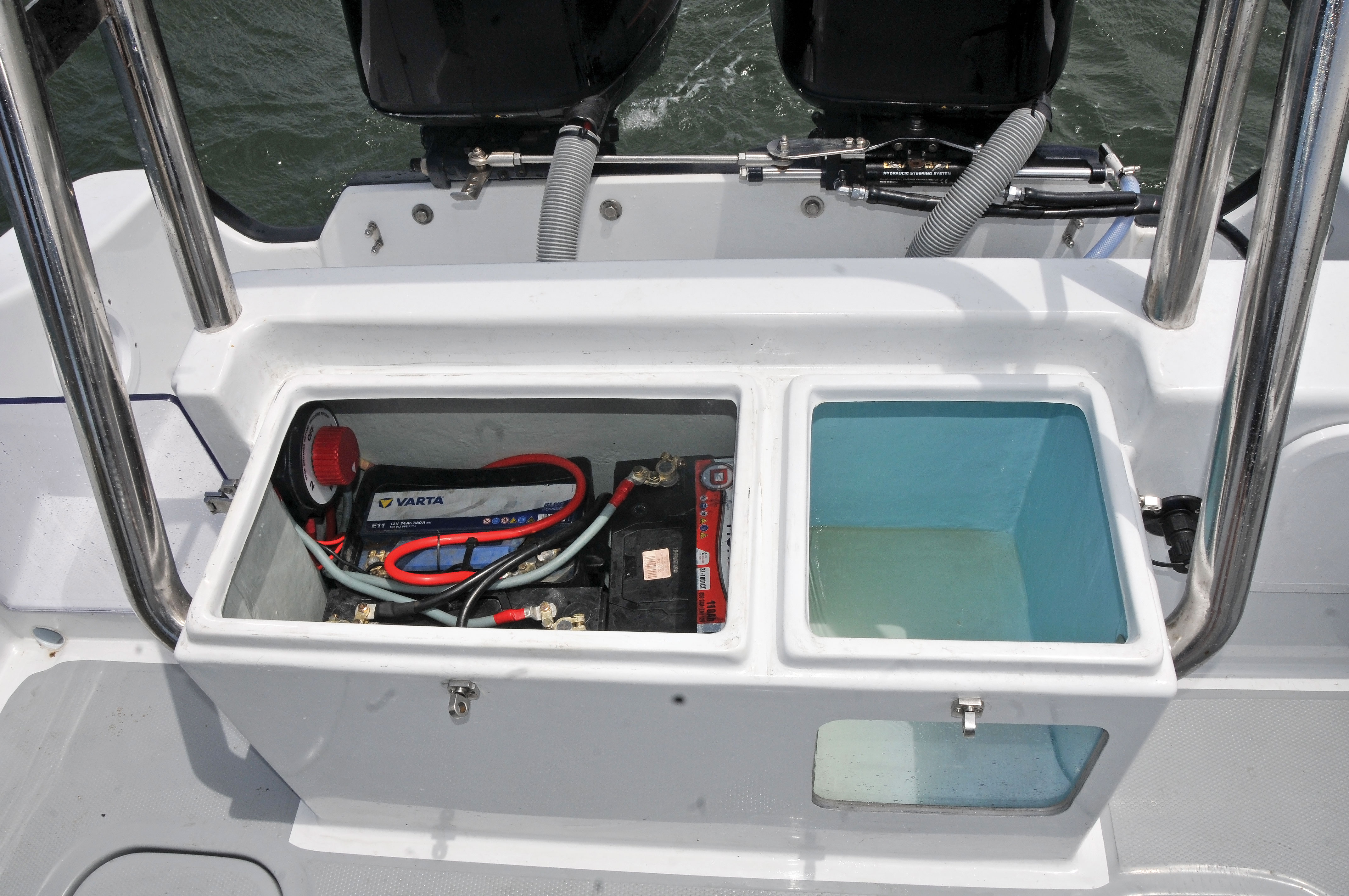 When I closely inspected each and every aspect of the Atomic 22 I was blown away with the detail as well as the moulding and positioning of all aspects of the craft. Within the space available here I can’t do justice to all those details, but a few ideas Kevin has incorporated need mentioning. For one thing, he sited the 300 litre built in fuel tank in the forward area of the centre console using its inherent weight to balance the riding stance of the craft. While fuel weight obviously reduces during a day’s fishing, there’s a large aft centrally sited fish hatch that can handle the big tuna caught off Kevin’s home port of Cape Town, and the fish weight will replaces the lost fuel weight. This hatch is ideally positioned to have the weight aft for the long ride home from the deep. What if you catch no fish? This hatch can then be flooded with water to balance the craft for the ride home. 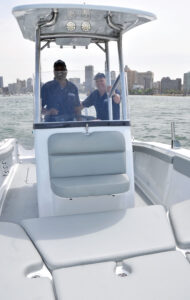 Another impressive feature is the T-top pod that, in addition to providing the necessary shade, also incorporates forward- and aft spotlights, VHF radio and sound system in a beautifully designed and rounded pod. I found the helm station was comfortable both whilst standing at the helm for long runs and while seated during all the trolling patterns we attempted. The helm seat with back rest was sited a tad close to the helm station for me, but an observant Kevin already noted that and said it will be changed on future models in accordance with owner requirements. Under the seat is the all-important insulated cool box — very handy! The entire fishing deck including the gunnel height has been designed and implemented in such a way that it can be reconfigured to each owner’s requirement. All the front seating and hatches — immaculately finished inside and out — were installed for those who want the Atomic 22 for leisure use as well as fishing.

Each individual craft’s owner can determine how many of the extras that are available are needed or wanted. Looking at the aft deck area with its space and practical work area, I feel it offers great fishability and I believe I would enjoy fishing aboard the Atomic 22 while trolling for gamefish as well as billfish. The well-designed transom and motor well, livebait well and stern access will all help facilitate an enjoyable day out on the ocean. Whether you’re looking for a boat to undertake a foray out into the deep off Cape Point, to the still waters of Knysna lagoon, the mighty Vaal River or Jozini Dam, the various boating uses for each of these venues will determine what deck layout will best suit you.

However, one thing doesn’t need to be adjusted — the Atomic 22’s hull will provide the ride and performance required to match any of these scenarios. The Atomic 22 will also win you over with her striking looks both on the water and off. As with so many of the boats I review, it’s impossible to convey the full extent of the niceties that the builder puts into making the craft as perfect as possible. I thus suggest you undertake a close personal onboard inspection of the Atomic 22 to appreciate the efforts Kevin and his team go to to satisfy his own personal high standard which results in the perfection I observed.