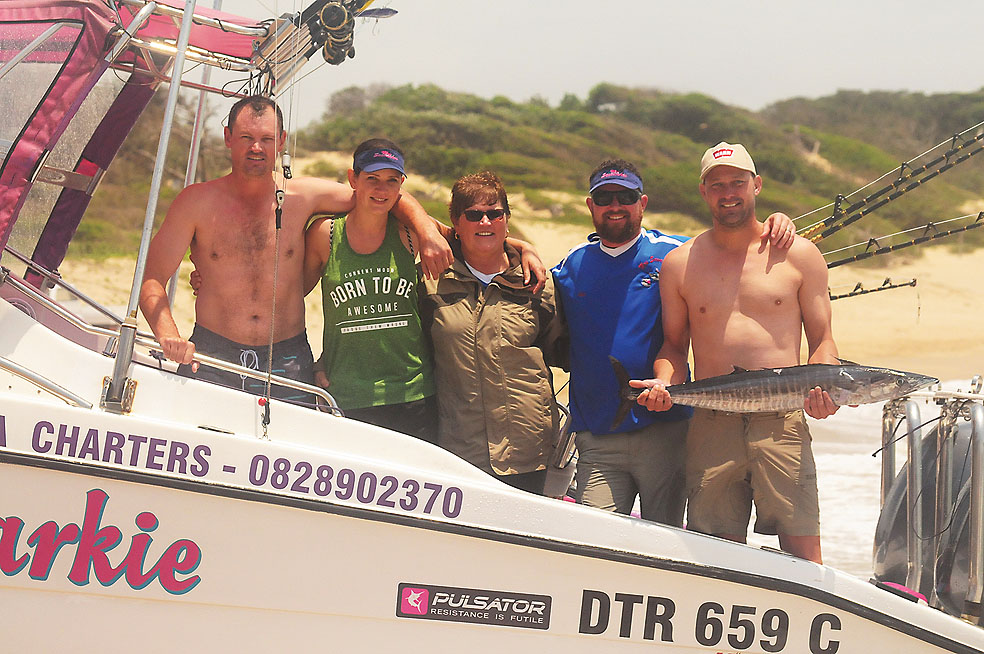 (Published in the March 2018 issue of Ski-Boat magazine)

Though the sea of life’s uncharted
At times, it must be said
The finest craft is Friend-ship
When it steams full speed ahead!
— John M Robertson
AS John Robertson’s poem rings in my head, this is how I sum up the Billfish 15 000: It is a competition of friendship, apprenticeship, workmanship, hardship and most of all it’s about your ship tagging and releasing fish …
The 2017 Billfish 15 000 tournament was once again hosted by Dorado Ski-Boat Club, at Sodwana Bay in KwaZulu-Natal. With a new base and new image it was once again a big success thanks to the hard work behind the scenes and the buy-in from sponsors and anglers alike. The camaraderie there is really something special.
Last year the event’s base was moved to the Sodwana Bay Lodge, and with a new stage and bar trailers, it looked spectacular. The sponsors all seemed very impressed with the Billfish 15 000’s new look. On the Sunday, all the boats were registered for the event and the tent was packed with all the teams excited to get on the water and start fishing.
On Monday 13 November 2017 the Billfish tournament started off very slowly and only four billfish were tagged and released. Every night was tent night and there were prize give-aways galore, with happy hours and much game-plan chatter. Numerous daily cash prizes as well as prizes like limited edition cooler boxes, compressors and battery vouchers from Probe Corporation, lure packs, reels, and lots more were handed out.
It was a very emotional time for everyone present when Oupa Attie Janse van Rensburg, aged 94, (pictured below) had an opportunity to speak to the crowd. He’s a real angling legend and had most people in tears.
On the second day all the boats went to sea but the billfish just did not want to be hooked; in the end only two billfish were released. On Wednesday things changed dramatically and the lucky crew aboard Mrs Seevarkie released three billfish before 10am and took the lead in the tournament. Mrs Seevarkie and her team had certainly upped their game to ensure they were among the legends at the 2017 event. Sadly Thursday was a blow-out.
On the Friday the game was still on and all the teams had their eye on the first prize — a Carry Cat 670 on trailer, with two Yamaha F70hp motors, equipped with an Onwa fishfinder and lots of extras. The winners would also walk away with a R25 000 clothing voucher from Columbia and an invitation to the Offshore World Championship in Costa Rica, as well as insurance on the boat from Club Marine — in total a prize worth almost R650 000.
The team aboard Mrs Seevarkie, stayed focused and made sure that they won the 31st Billfish 15 000 tournament after 22 years of trying!
On the last day they quickly released their fourth billfish for the tournament, and knew that they could start celebrating. With one blue, one black and two striped marlin for the week, they had 1 123 points on the board. Mrs Seevarkie had 500 more points than the second placed team — Captain Fine (last year’s winners) — which had 510 points; they won a Lowrance HDS12 Gen.3 fishfinder, worth R53 250. Team Sea Breeze came third with 508 points and won a Zeon Platinium 12 000 Warn winch worth R44 400.
The week ended with a total of 35 billfish released and culminated in a spectacular prize-giving event! Mrs Seevarkie’s crew proudly stood on their new Carry Cat 670 while their theme song — Jo Black’s Skepe — played in the background!
The Dorado Ski-Boat Club committee would once again like to thank all the loyal sponsors, anglers and everyone else involved for another great Billfish 15 000 Tournament. We can’t wait to see all of you at Sodwana for the 2018 Billfish 15 000 Tournament — it’s going to be fantastic!