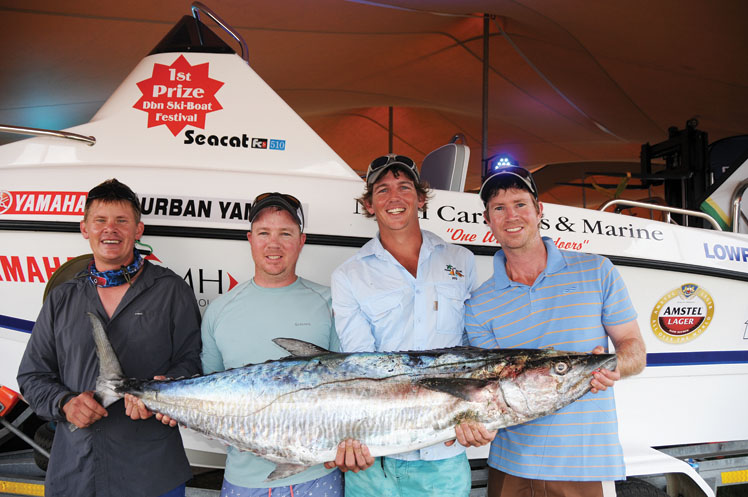 AS always the build-up to the Durban Ski-Boat Club Festival was super exciting, but there are always questions … Would the old faithful and new aspiring anglers still support a festival that had left its historical home and would they press forward in strong support? There was really thing to fear, though because the club is nicely settled at its temporary home with its sights firmly set on its final home once the city’s development is completed.
This year 28th and 29th April had been set aside as fishing days with all the anglers hoping to boat a worthy ’cuda and secure the main prize of a Seacat 510 with twin 60hp 2-stroke Yamaha outboards and a trailer worth R410 000. This magnificent prize was the result of an ongoing collaboration between Yamaha, Natal Caravans & Marine and Durban Yamaha. The fact that there were further prizes on offer in excess of a million rand didn’t hurt either.
And yes, to answer my earlier question, this year’s festival was wholeheartedly supported by 693 anglers on 237 boats! Certainly one of the largest festivals of its kind in the world.
’Cuda are not the only fish in the running for prizes; other gamefish including bonito, dorado, prodigal son, queenfish, snoek, wahoo and yellowfin tuna can also bag great prizes for the anglers that land them. Billfish and kingfish are not permitted at weigh-in, though, and thus anglers are discouraged from targeting them. Specific categories are also set up for ladies and junior anglers. Durban Ski-Boat Club believes strongly in the event being a family affair and caters accordingly, with safe areas for the youngsters to enjoy themselves. As usual the NSRI was invited to do a rescue demonstration on both days which was thoroughly enjoyed by those who were waiting for the boats to return and fish to be weighed.
The weather played ball this year and although at first anglers found it difficult to locate the croc ’cuda, the other species kept them busy and filled all the categories with worthy fish. Ethan Pretorius, a junior angler, was first to weigh in a decent sized ’cuda on the Saturday. Everyone agreed his 20.38kg specimen was a good fish, but would it be good enough to survive on top of the leader board for the full duration of the festival?
Weigh-in times opened at 3pm and 2pm respectively on the two days fishing and generated a great deal of excitement as animated anglers stood in line waiting for their catch to be weighed. The club had arranged for the weigh-in station be situated in front of the large tent right next to the prize boat and within easy view of all inside the tent who were enjoying the shade, company, food and libations that were readily available.
As usual, this was an incredibly well run event and the committee must be congratulated on pulling it off so well, especially in a time of transition.
Eventually Ethan’s ’cuda was chased down, but only two anglers managed to eclipse the benchmark he had established early on the first day’s fishing. Carel Hunlun weighed in a beauty of 25.18kg but top honours and Seacat 510 went to Ryan Driemeyer with a winning ’cuda of 26.9kg.
I pulled out the calculator and did the maths — if the first prize’s value was divided by the winning fish’s weight, the fish was valued at just over R15 240 per kilogram. A dream fish and a dream come true; a very profitable two days for Ryan indeed.

TUNING IN ON THE PODS