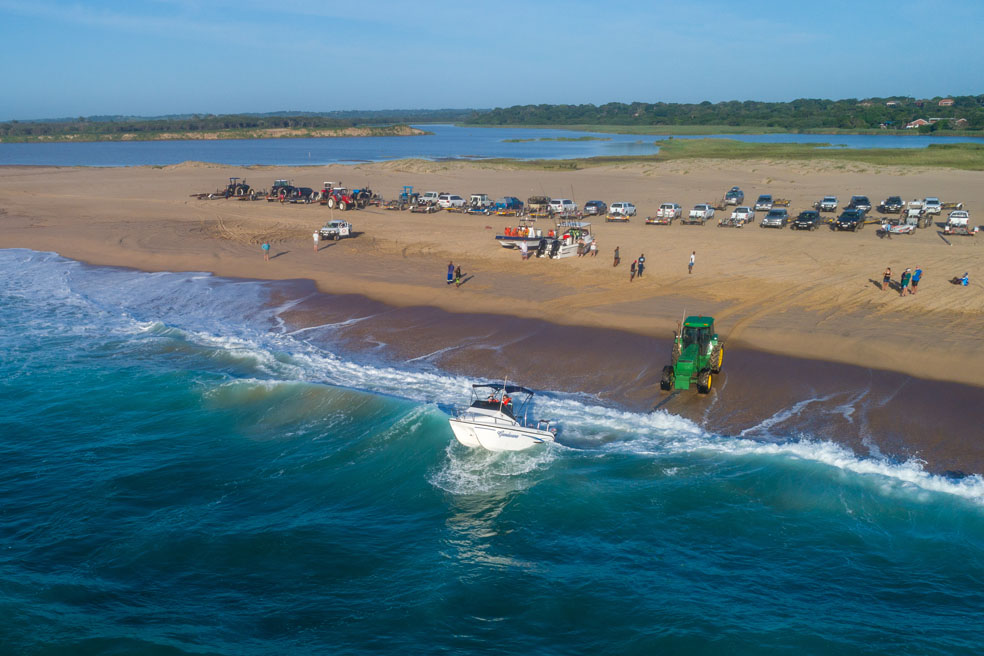 (Published in the May 2018 issue of Ski-Boat magazine)

THE 38th edition of the Southern Gauteng Deep Sea Angling Interclub was held at St Lucia in Northern KZN from 5 to 9 March 2018. This annual competition is all about friendships and camaraderie fostered over the years between the six SGDSAA clubs, but ultimately it all boils down to the bragging rights bestowed on the club that wins the coveted Rosebowl trophy.
This year Nomads Game Fishing Club, celebrating its golden jubilee, elected St Lucia as the venue and, in collaboration with St Lucia Ski-Boat Club, hosted a safe and exciting competition that included four days of hard but rewarding fishing.
Competitions of this nature do not simply happen, so at the outset I would like to thank iSimangaliso Wetland Park and Ezemvelo-KZN Wildlife for granting us permission to host the tournament in their jurisdiction. Thank you also to the Nomads committee for organising another great competition, in particular Tyron Gruar the tournament director and of course our sponsors. There are many individuals who contributed, but I would like to single out our headline sponsors Land Rover East Rand, Hollard Insurance and Rowlin Insurance Brokers for their generous contributions to the competition and the sport as a whole.
The decision to host the Rosebowl at St Lucia was hatched by a number of Nomads members who had fished various competitions at St Lucia during the 2017 season. They were most impressed by the organisation of the club and its well-run clubhouse and beach control. Needless to say we were not disappointed. From Oom Piet on the beach to the ladies at the bar, big competitions seem like second nature to Johan Engelbrecht, Johan Lange and the St Lucia committee.
Most of the competitors elected the “all meals included” option to avoid buying and cooking for themselves and were treated to generously proportioned meals and better than a lot of Johannesburg restaurants. I would be remiss not to mention that prize-giving was scheduled for 7pm on Friday night, but due to a blow out it was decided to bring this forward to lunch time Friday. St Lucia club again stepped up to the plate and served the delicious sheep on the spit five hours earlier than originally planned. Well done guys.
Although the committee members were keen, getting support from the zone for St Lucia as a competition venue was not all plain sailing and it did require considerable convincing to get anglers to participate. For many this was the first time they had launched at St Lucia, and as it’s an open sea launch there were some apprehensive skippers. Nonetheless on day one, 39 boats lined up on the beach to represent their clubs.
As luck would have it, day one presented us with a light wind but a somewhat unfriendly surf that had skippers scanning the waves with knots in their stomachs. The organisers were called some creative names, but with a little patience, the skilled timing of Wiseman the tractor driver and a safety-never- goes-on-vacation attitude, all but two boats in the fleet launched and returned safely.
The surf conditions improved for the next three days, and by the end of the week there were no gripes about the launch. One skipper even thanked me for arranging the competition in tough but not unsafe conditions, saying I helped him finally grow a pair.
In fact, the most serious complaint about the competition as a whole was that the organisers did not take into account the number of speed humps between Matubatuba and St Lucia.
Over the four days fished, approximately 1.2 tons of fish were weighed, with all billfish being released. Species caught included ’cuda which were prolific but small, some reasonably sized yellowfin, a nice GT, a few cobia, wahoo and three sailfish. The most meritorious of the gamefish (on points) was a 17kg yellowfin tuna caught by Trevor Mosley on Hooker, a 17.4kg cobia caught by Ryan Canny, a 97cm approximately 16.2kg ignobilis kingfish (GT) caught by Dion Wilmans, a 17kg wahoo caught by Wade Martin and a notable 15.4kg yellowfin tuna caught by Jonathan Eloff a junior angler.
However the X factor that sorted the men from the boys was the marlin. Mitchell Moore on Naughty Buoy kept Nomads in the hunt with a black marlin on 10kg tackle, but then Makaira’s Sebastian Hendriks and Jason Nielson each caught a blue marlin from Mitsu-fishi to give their club the edge.
The three top boats were Father Time, Mitsu-fishi and Nauti Buoy. The top anglers were: Mitchell Moore, Sebastian Hendriks and Jason Nielson.
The scoreboard that really counts ended as follows:
1. Makaira 226.08 pts
2. TSC 196.11 pts
3. Nomads 119.42 pts
4. ERBFC 85.85 pts
5. Guinjata 57.27 pts
6. Albatross 54.16 pts
Thank you to all the anglers for their participation and well done Makaira. Good luck to TSC who is tasked with arranging next year’s Rosebowl.