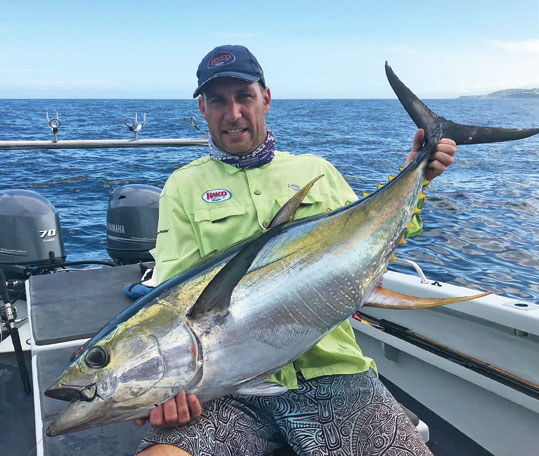 TARGETING tuna on the dolphins can be either an extremely rewarding or very frustrating experience. Up until a few years ago very few anglers would go searching for a pod of dolphins with the aim of catching a few good size tuna, but that has changed and it’s suddenly a very popular tactic. Could the sushi rage or all the latest delicious tuna recipes be responsible for more people targeting these brute 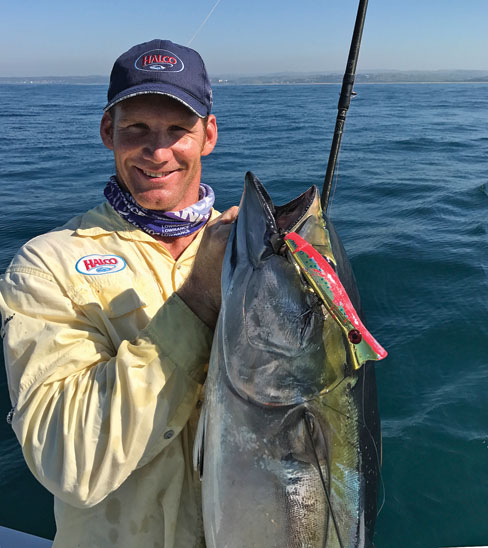 s or is it rather the thrill we get from trying to stop them?
Let’s face it, there are no longer many inshore fisheries that allow small boats to consistently target fish in the 20-30kg range. The last two dorado and ’cuda seasons have been dismal and this has resulted in even more anglers chasing tuna on the dolphins.
Whatever the reason, almost every pod of dolphins along our coastline gets bombarded by ski-boats, jetskis or fishing skis these days.
It can be a very productive tactic, but it’s imperative that every angler respects these mammals and fishes in a manner that allows them to go about their feeding and cruising as they normally would. Too often I’ve seen a boat or jetski disrupt the natural behaviour of the pod. This results in a mood change with these intelligent creatures and I firmly believe that the tuna respond to this as well.
Fishing around a pod of dolphins that doesn’t feel threatened and is allowed to feed naturally will result in more tuna hookups. There have been plenty occasions when a few boats have rushed onto the dolphins and had no bite whatsoever; once the majority of the boats moved off the patient anglers reaped the rewards and got a few bites when the dust had settled.
There are no set rules when it comes to any method of fishing, with
techniques and tackle forever improving, but below I’ve listed three approaches we most commonly use when targeting these big tuna.

GETTING AHEAD OF THE POD
Position A on the diagram
When we first started targeting tuna on the dolphins we would go about 300m ahead of the pod, running really wide on the way past. Once in front of the pod we would then cast two livebaits (rigged through the nose) towards the oncoming dol 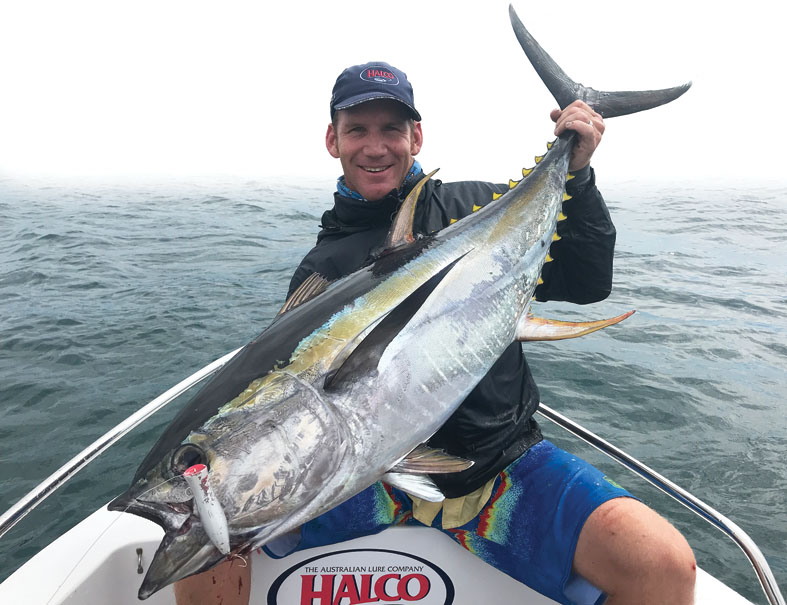 phins, keeping the boat idling forward.
Our first choice of bait here would be maasbanker rigged with a 6/0 Mustad Demon Circle or VMC 7/0 Live Bait hook with a metre of 50 lb flouro and no.4 Power swivel. The dolphins would swim over our baits as we idled along and we would let the tuna swallow the bait with the reels on freespool and ratchet on, before setting the hook.
Initially we used our ’cuda rods with our Daiwa Saltist BG 50 reels spooled with 300m 50 lb braid backing and 200m Maxima 12kg Ultragreen monofilament line. However, we soon realised how much quicker it was to subdue big fish with spinning/coffee grinder style reel loaded with 65 lb braid.

APPROACHING FROM THE SIDE
Position B on the diagram
Since we started using spinning reels, braided lines and 7-8ft casting rods we’ve tried a few different approaches when targeting tuna on the dolphin pods.
One of the most effective approaches was to drive up on the flanks of the pods without creating too much prop wash or disrupting the pod and casting livebaits or a popper towards the dolphins. We found that this approach resulted in the dolphins not changing direction or sounding because they did not feel threatened by the boat or the boat wash.
I find that if the pod is moving it up and feeding the dolphins are less likely to be “spooked” by the boat. This is also when the tuna are at their most alert, hoping for scraps from the feeding dolphins or for a baitfish to make a mistake while fleeing the ambush.
Tuna don’t always swim in the middle of the pod, sometimes they can be ahead, behind or on the sides of the dolphins. Some days the tuna smash the bait the instance it hits the water and other days patience pays off and your bait is only picked up after the pod has swum past. In this case the tuna are trailing the dolphins and not swimming amongst them. A good pair of polarized sunglasses comes in handy and allows you to locate these gas bottles, giving you a better idea of where to cast.
The way in which you rig your livebait also has a lot to do with your success ratio on the pods.
If the tuna are sitting below the dolphins then it is imperative to get your livey to swim down once it hits the water. Rigging the maasbanker or mackerel between the dorsal and tail, either on top or on the underside, allows you to cast a great deal further and also helps the bait swim downwards.
When rigging the livebait in the snout we use a treble hook as we find the circle or livebait single hook sometimes turns, and instead of hooking the tuna it rather hooks the bait in the gill plate or head.
Bridling your bait from the bridge of the eye socket is a better option; it results in a better hook up ratio and allows you to cast further.

APPROACHING FROM BEHIND
Position C on the diagram
On days when the dolphins are a bit skittish then it is sometimes best to try pitching baits or surface stickbaits/poppers from behind the pod.
The same rules apply — try not to disrupt the pod while edging in as close as you can without having the pod sound or change direction.
This is where the poppers and stickbaits come into a league of their own. With this method the boat doesn’t need to be right on top of the pod as you can cast these lures long distances and you can have multiple casts while the pod is still in range.
There are always going to be the days when artificial lures outfish the livebaits and vice versa. We always carry a range of different size Halco Roosta poppers with us as well as a few floating and sinking stickbaits as you never quite know when the fish are going to prefer artificial or liveys.
Our rule of thumb is to use the Roosta 135 for flat, glassy conditions and the Roosta 160 for windy/rougher sea conditions. If we’re fishing areas like Aliwal Shoal or Protea Banks we fish more 160 and 190 Roosta poppers. These larger poppers have significantly stronger hooks, thus allowing you to stop the bigger fish while using a much higher drag setting.
We never leave the beach without our Daiwa Saltist 8’6” popping rods rigged with our Catalina 5000 spinning reels loaded with 65 lb braid. When we’re fishing areas with a lot of shark activity then we fish 100 lb braid so we have a better chance of putting the brakes on and getting the fish to the boat before the taxman takes his share.
We mostly use Sunline 67 lb fluoro carbon leader on our popping outfits and the length of the leader is normally from our top guide to the base of our reel. I use the Daiwa Grandwave jigging rod with a Saltist 5000 for casting baits and this is also loaded with 65 lb braid.
If the bite is slow and the fish are a bit shy then we tend to use a thinner and longer fluoro leader. The only downside to this is that if you gut hook a big tuna and have it on the line for a long time, its teeth can chafe through the thinner leader line. Using a circle hook helps prevent this problem because it hooks the fish in the scissors of the mouth.
Let’s hope these tuna stick around for a while and that everyone respects the dolphins and the other anglers out there, ensuring everyone has a good time.