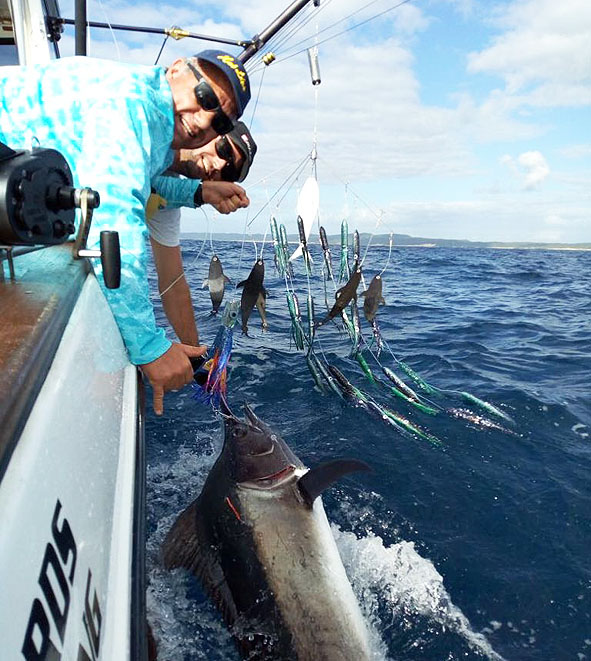 WHEN YOU SEE A MARLIN…
I have been asked what I do if I see a marlin mark on my sounder. My sounder is set to scan from the surface to 150 metres so that it will hopefully pick up the marlin which usually swim at between 30- and 100 metres, and also bait showing below this depth. Bait showings indicate an area to be worked even if marlin are not marked. If the billfish are in the first 0- to 15m you will seldom mark them on your sonar.
If you pick up a marlin mark it’s essential that you turn 15 degrees on the helm towards the dredge side, allowing the dredge to come into clearer water, making it easier for the captain or crew to see the fish behind the dredge. Once you have turned 15 degrees, hold course for at least 300- to 400m. Every fish behaves differently, and if fish are marked at a shallower depth they will be up on your spread a lot faster than fish which are deeper in the water column.
If you have marked a fish and you do not allow a long enough period for the fish to come up into the spread, you might lose it. Often you will raise the fish on a sharp turn, thus changing the performance of the lures that you were turning on as they slow down on the turn. I have seen this happen numerous times, where the fish then fades off due to the lures on the inside stalling.
If you have not raised a fish within your 300- to 400m run you can then start turning back to the area where you marked the fish and see if you can get a second run at your marked fish. see Diagram D for an example of the troll pattern I would use.
Dredging adds a new and exciting dimension to the sport of targeting billfish and, for many of us, has produced incredible results. I think that running a dredge most certainly helps to raise fish up from deeper water, and the side profile of the dredge can be seen much more easily by fish than a surface lure smoking. The other great thing about a dredge is that you’ll find that 80% of your bites are on your shorts, and if you have not hooked up on the first attempt, most fish will fall back and have a go at your longs. This gives you a second shot, whereas if you miss a fish on your long it very seldom comes forward to eat your short.

MIKE TYSON OF THE SEA