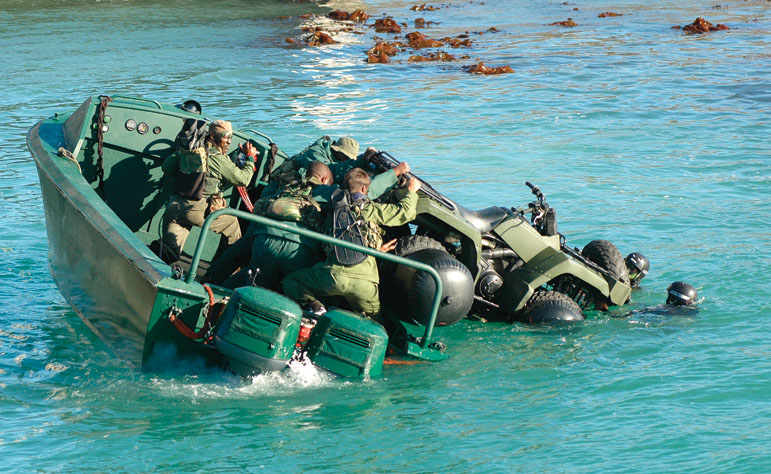 THE year was 1978 and South African troops were guarding the north western border of South Africa and South West Africa (now Namibia) and South Africa’s north eastern flank with Moçambique. The land, air and sea divisions were on active duty.
In Iron Fist from the Sea, a recently released book, Arnè Söderlund and Douw Steyn document the activities of 4 Recce’s (4 Reconnaissance Commando Regiment) waterborne operation during the period of conflict.
Recently a man was looking at the digital version of the book and recognised the commando-style boats shown in some of the accompanying photographs as being the boats his father’s factory used to produce in the early 1970s. That man was Gary Oliver, and his father, Clive Oliver, was once South Africa’s foremost boat builder and the owner of Ace Craft.
Clive, currently resident in the United Kingdom, is now permitted to break an almost 40-year silence which he was forced into in terms of the Secrecy Act. He told me the story of his clandestine meetings and prioritised manufacture of 18- and 21ft Ace Crafts for the South African Navy.
The deck layout of these boats was modified to carry six and eight recces respectively, in addition to each boat’s three crew members. The boats were fitted with two 90hp and two 115hp Yamahas respectively and the entire rig was over sprayed with dull grey/green radar reflective paint.
Douw Steyn was at one stage the Operations Commander of 4 Recce, and during our meeting in Durban he told me that 4 Recce consisted mainly of troops from “die ou Transvaal” who had little or no boating experience and knew even less about handling a craft at sea and going through the surf. The Natal Sharks Board staff who were already using these craft were commandeered to train the manne of 4 Recce before they were sent to their initial base in Langebaan.
Operationally, Douw and 4 Recce’s task was to land troops within the operational area to strike at predefined targets from a lonely beach in the dead of night. The Barracuda craft, as the navy named these boats, were deployed from navy strike craft up to 20 nautical miles off the coast. Their sole navigation aid was a compass which would guide them to the designated beach where they would generally disembark the troops along with tommy guns, explosives and other weapons of war.
Once they were off the craft the three crew held the craft in the shallow surf line to mask it from radar detection, or circled within the surf line to avoid detection. A craft beached in the way we all do when fishing would have become a proverbial “sitting duck”.
Once the troops were all back aboard after such a sortie, the Barracudas would exit the surf and rendezvous with the strike craft about five miles out to sea. It was not an easy task on a dark night, especially when the compass was the only navigation device.
Douw explained how they reached their destination … The skipper had set times for distance at a set RPM, so he would calculate how long he would have to ride at the set speed of, say, 3 500 RPM to cover the distance to the rendezvous point. Having arrived, he would then circle around the said spot awaiting pick up by the strike craft. The strike boat had either an aft standing dolly (see diagram) or a deck hoist to deploy and retrieve the crew and the craft itself.
Those who know the sea understand the effects current, wind and chop have on a craft, and one has to marvel that these rendezvous were ever achieved.
This regiment (4 Recce) was operational for ten years and was deployed from areas near Cabinda in the far north of Angola, as well as Luanda, Lobito, Namibia, and then Maputo, Beira and Quelimane in Moçambique, and up to Dar es Salaam in Tanzania, and proved to be a formidable force during this period.
It is interesting to hear reports of how these Barracuda/Ace Craft boats were used by the strike craft. Both they and the inflatables that were deployed from submarines for similar tasks proved to be extraordinarily strong and seaworthy considering the enormous time they spent on the water during training exercises and during the height of action.
In further commendation of both the craft and the crews who skippered them, only one craft was “flipped” during these ten years, and it was flipped in the surf during Operation Simple. None of these craft were sunk during the period 4 Recce was operational.
As Ski-Boat magazine is as much an offshore boating magazine as it is about fishing, we felt that this exposure shows the extent of the innovation that was present in the offshore boating community at that point in time and which indeed has continued to develop over the intervening years.
For the Ace Craft to be chosen for this demanding service and to come through the ordeal so well over the course of ten years says a great deal for those who designed and built them.
South African-built offshore craft are generally extremely well made, after all most of them must face the daunting task of bearing up in our rough seas as well as withstanding the bruising treatment of being launched off the beach and the even tougher impact of hitting the beach at speed to slide the craft fully out of the water. A tribute to both man and boat is detailed in the book.
Iron Fist from the Sea is an excellent read and even those with no great interest in military matters will gain much insight into what men and boats achieved from virtually the very first boat we used to go fishing.
If you can’t find a copy of this book at your local book store contact Douw Steyn directly via email <steynd@
proteacoin.co.za>.

TRIPPING UP THE NORTH WEST