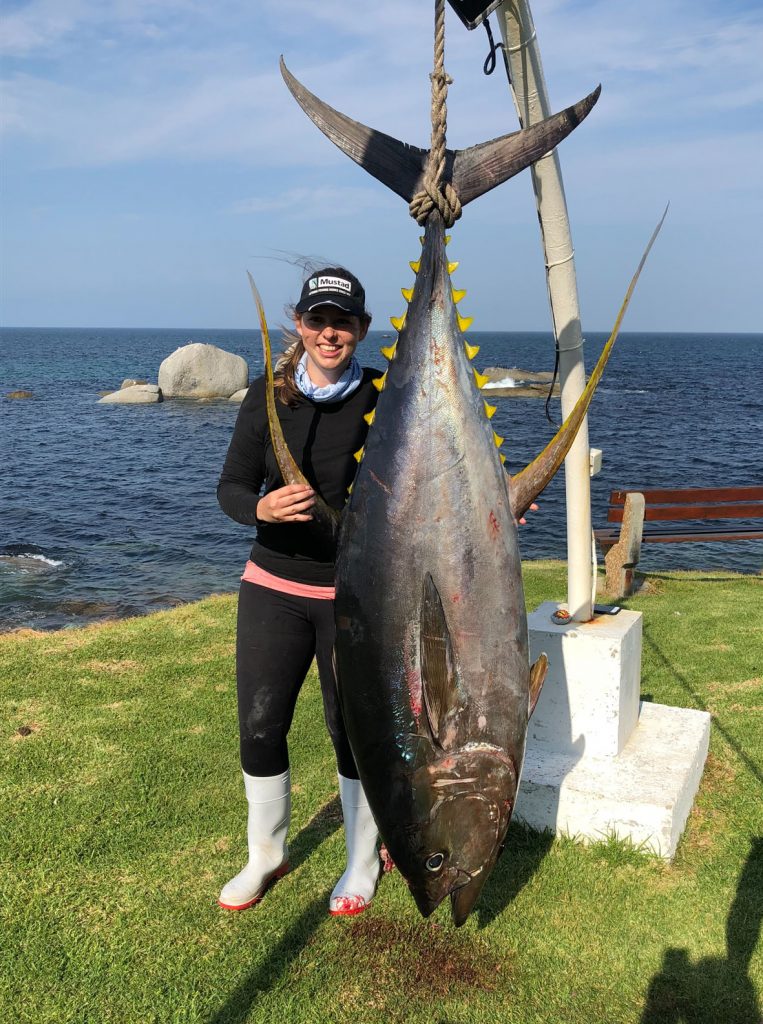 (Published in the January 2019 issue of Ski-Boat magazine)

ON Tuesday 9th October 2018 the weather conditions were perfect for yellowfin fishing. The Sunday before we had made the trip out to the deep but had only found longfin tuna, not the first yellowfin tuna of the season that we were looking for. With the aim of getting in a bit of fishing time before the Cape Boat and Ski Boat Club’s 50th October Tuna Invitational Competition and hopefully a yellowfin tuna, my husband, Gareth, our friend, Clinton Sassman, and I had all taken the day off work.
After launching our Sea Cat 565 Mahi Mahi at Millers Point at the site of the Cape Boat and Ski Boat Club, and with the sun peeking over the horizon, we soon arrived at Cape Point. A bit of early morning spinning ensued, and within a short space of time we had four nice sized yellowtail on board. We then made the run to the Canyon about 25 miles south of Cape Point.
After heading on a course of 240 degrees, we found a lot of ski-boats and poling boats sitting in 16.9°C water. We spent an hour trolling the area without success, but we had seen one or two guys sitting on big tuna, so we knew there were fish in the area. We decided to begin baiting, and within 45 minutes Gareth went vas on a good yellowfin tuna that took about 40 minutes to land It was a nice fish of 80kg and we were stoked to have a good fish on board.
It was then my turn to bait. With the finder showing good echos below I watched a beautiful looking yellowfin take my bait and it was FISH ON!
I knew it was a big fish by the speed the line was peeling off; with a strike drag setting of 10kg, the ratchet was screaming.
The fish began the fight on the surface before diving, and when he had peeled off a large amount of line from my Tiagra 50W he did a U-turn and came flying back up the line! I had to reel for my life to try to keep the tension on the line.
He then surfaced and went down again, putting a huge bend in the Profile tuna stopper rod. We got into a steady paced fight, the Black Magic harness helping me while I made sure my rod was at 90 degrees to the boat and giving lots of little pumps and winds. I wanted to make sure nothing went wrong, while Gareth and Clinton decided it was a good time to try out the new Rapala popper while I took a long time on what they thought was “not a big fish”.
During the battle the tuna surfaced three times, and on the second surface he jumped clean out of the water; what an amazing sight! After a 70 minute fight, and what seemed like a hundred circles, the fish was finally at the boat.
My legs, arms and lower back were burning. Despite my regular three days a week of boxing training I was grateful when hubby finally gaffed the fish. It took the three of us a few attempts, with much grunting and groaning, to get the yellowfin over the gunnel.
Looking at the fish’s tail I could not believe the size of it. A quick check with the tape and the fish weights application confirmed the fish was over a century. With Gareth wondering why he hasn’t caught a fish over 100kg and Clinton saying he wasn’t interested in catching a fish that size, I was beyond stoked and could not believe it; my previous personal best yellowfin tuna was 75kg.
After seeing that the fish was never going to fit in our large fish bag or hatches, we covered it with two damp beach towels and set a course at 20 knots for the two-and-a-half-hour run back to Cape Boat and Ski Boat Club. Along with my aching muscles I had a massive smile on my face. I could not help but wonder at the exact weight of the fish on deck. Growing up fishing on Lake Tanganyika I certainly never dreamed I would catch such an amazingly beautiful, streamlined, powerful fish such as this.
Once we were ashore and with the help of some of the guys at Cape Boat and Ski Boat Club we had Team Mahi’s achievement on the gantry. That magnificent fish weighed 112.2kg! After plenty of congratulations we arranged to have the fish donated to several charities. We also did all that was required to apply for an SA woman’s 37kg yellowfin tuna record, and that is now pending confirmation.