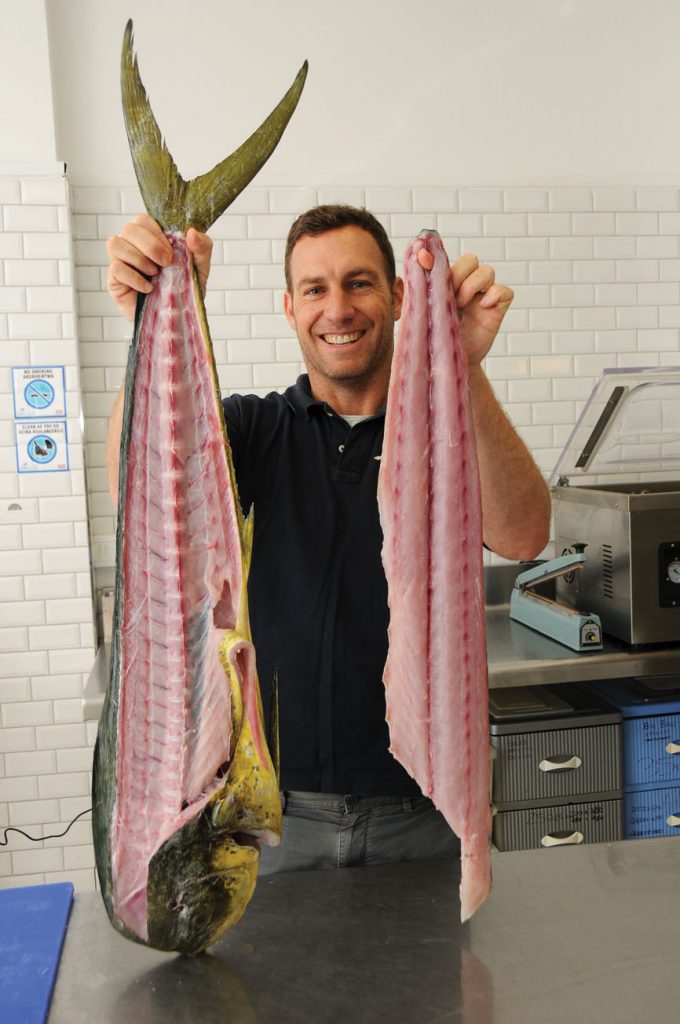 (Published in the January issue of Ski-Boat magazine)

FOLLOWING the highly acclaimed article by Daryl Bartho on how to best prepare freshly caught king mackerel for cooking in the May/June 2018 issue of Ski-Boat magazine, we ran another article by him showing his method of filleting a yellowfin tuna to maximise the use of valuable fish flesh for sashimi and to braai. This time he shows us how to fillet dorado. Some of the methds might surprise you, but there’s no doubt Daryl’s a master at this …
Serving freshly caught fish that has been “professionally” filleted and properly cooked is a special treat, and one only has to view the prices asked by most leading restaurants for their “fresh fish of the day” to establish the value of the ’cuda, tuna or dorado you have just harvested from the ocean. With that in mind we hope this series of articles will help you make the most of that valuable commodity.
Every time he has a conversation about the preparation of freshly caught fish Daryl reiterates that the delicate fish cutlet, the thinly sliced tuna served sushi-style or a pan-fried sirloin of dorado starts its path to perfection from the moment the fish is gaffed. From then onward the handling of the fish is paramount. Treat it with the utmost respect to ensure that the flesh portions obtained after filleting are in as pristine a condition as they can possibly be.
Start with the gaffing — a clean, sharp gaff thrust into the head area of any fish brought right alongside your boat is the best way to start the process of harvesting quality fish from the ocean to the dinner table.
Secondly despatch the fish as soon as possible to prevent it from thrashing about on the deck and bruising itself and mushing up at least one flank of its body.
Finally, and most importantly, cool the fish as quickly as possible by placing it in a “kill bag” or fish hold containing a good quantity of crushed ice or a number of bags of ice cubes.
A kill bag is by far the most efficient way of keeping your fish cool, because the catch can remain in this insulated bag right up to the moment the fish is placed on the filleting table for final processing.

LET’S START FILLETING
When Daryl removed two dorado from a kill bag that had been caught the previous day and placed them on the filleting table at Bartho’s Fish Shop in Durban North they were in perfect condition to start the process.
Using clean dry wipes Daryl fully removed the remaining flakes of ice and thoroughly dried the entire already gutted dorado before making the first incision with a very sharp knife.
To maximise the amount of perfect fish flesh he sliced through the skin only (see pic 1) before commencing the filleting processing. Daryl starts at the forehead of the dorado and peels off the fillet from the top of the fish back toward the belly area.
No, he does not first skin the dorado as so many of us usually do.
His reasoning is that having the skin still attached aids the filleting process in that the flesh still adhering to the skin is held in place while the entire fillet is peeled off as close to the fish’s spine as is practical.
Secondly, when the skin is ripped off it leaves behind the inner lining of the skin. This almost lattice-like lining, while technically edible, does not make the final fillet or cutlet look all that appetising. A further factor is that when you’re skinning with a “big pull” a large number of the minute scales on the outside of the skin are dislodged and tend to end up on the flesh and the surface on which you are working.
After the two fillets have been removed they are placed skin down on a clean, dry cutting board. Using a long, flexible, flat-bladed filleting knife, starting at the tail end by holding down the last few millimetres of the fillet, the knife is slid forward toward the head section, perfectly separating the fish from the skin.
With these two firm, beautiful fillets ready for portioning and packing, the final task is to ensure there are no little scales on the fillets.
Portioning is obviously an individual preference, but as he is packing for display and sale Daryl packs slices of approximately 200g per portion as this is the accepted norm by folk purchasing this valuable and extremely tasty protein.
From the photographs alongside you will have noticed that the filleting extends right up to the top of the dorado’s head. In that section there’s a nice little fillet of soft, tasty flesh, so it’s a pity to toss it away with the carcass. According to Daryl it’s a fish cake portion, but when we tried this at Sodwana with a piece from a bull dorado it was perfectly delicious panfried.
In the early years we considered dorado as trash fish because of its “snake skin” and mushy flesh — largely as a result of lying on a hot, open deck all day — but now it’s deemed to be one of the best, if not the best fresh fish to eat. Seared, pan fried in butter or batter and even baked it is simply delicious.
A final note from Daryl is that when cooking dorado please ensure you treat this delicate flesh with gentle loving care as over cooking it will detract from its soft texture and delicate taste.
Whilst it’s best eaten straight away, dorado can be kept for short periods of time if the fillets are vacuum packed or well sealed in a heavy duty plastic bag before freezing. Enjoy!

FISH OF A LIFETIME