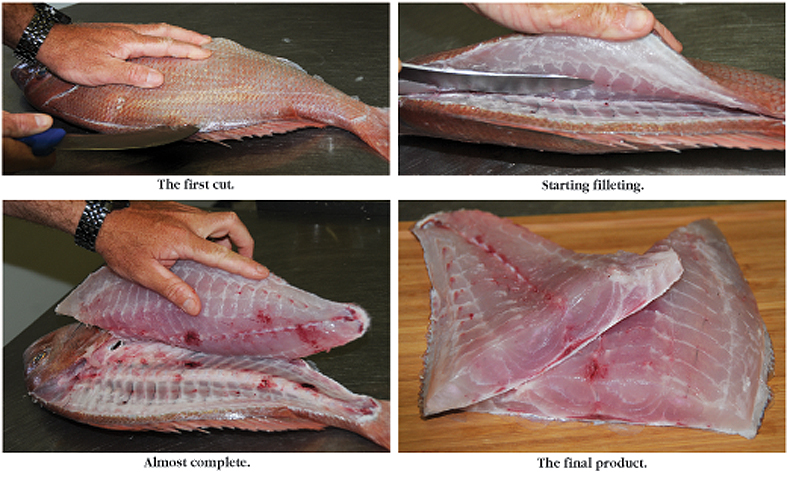 (Originally published in the September 2019 issue of SKI-BOAT)

By Erwin Bursik and Daryl Bartho

SINCE time immemorial man has set out to catch fish for one specific purpose — to secure fresh and succulent protein for consumption. To some degree in modern times fishing has evolved to include targeting a specific species, enjoying the fight and then having the pleasure of seeing that fish swim away.
But, to be realistic, a fish for the pan comes first, and after that requirement has been met the “hunter” becomes “sportsman” and is often inclined to release subsequent surplus catches.
Along the South African seaboard from Port Nolloth to Richards Bay (excluding the newly declared MPAs) the vast majority of offshore anglers target primarily the demersal reef fishes that are in relative abundance all year round off our coast. These are the core species that offshore anglers target for consumption.
In recent issues SKI-BOAT magazine has run a number of articles highlighting the preparation of pelagic gamefish for the table and our readers have eagerly received these articles. Most of those readers have learned a lot about the final preparation of this extremely valuable protein source, and have also come to appreciate the importance of handling the fish properly from the time of capture to ensure it stays in tip top condition for eventual processing.
The demersal fish caught around our coast produce some of the whitest and most succulent table fish on offer. They range from the bigger species such as red steenbras, kob and musselcracker that have large-flake flesh to the smaller of these species like dageraad, soldiers, red stump, slinger, rock cod and many others that have finer white flesh. These fish’s fillets may be more difficult to prepare for the table, but their tastiness and succulence makes it worth the effort.
In this issue Daryl Bartho of Bartho’s Fish Company demonstrates how to maximize the amount of flesh you get off one of the smaller demersal species…
Is it a science or an art? I pondered that question as I watched and photographed Daryl preparing a freshly caught soldier for sale in their fish shop in Durban North. It’s like watching a good butcher cut meat — mastery at its best and a pleasure to watch.
As Daryl commenced he explained that with most of the smaller bottom fish (excluding for example big kob, cracker, red steenbras and rockcod over 5kg) there are specific requirements by those purchasing these fish. Scaled or not scaled, filleted or cut into cutlets, with or without the head — these were some of the options that surprised me. Some clients want the fillets beautifully taken off the carcass but want the scales left on. I’ll explain the reason for this elsewhere in the article …
To start with Daryl has the fresh bottomfish gutted as soon as possible after returning from the ocean where they have kept the fish on ice in the hatch or fish bag. After gutting and washing the fish they’re kept in a cold room prior to processing. It’s very important that they’re not frozen or partially frozen, because once frozen and defrosted, the cells in the flesh break down and the fluid in the flesh leaches out. 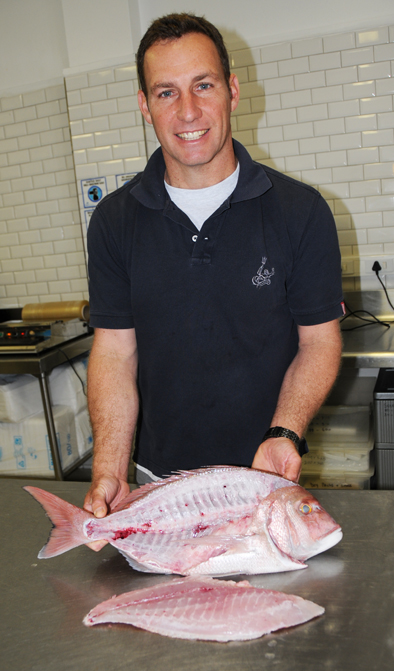 The prepping is done on a clean surface which Daryl constantly wipes to remove any blood and scales that drop when he’s filleting fish with the scales still on the skin.
Using a very sharp knife he finally made a deep incision around the back of the head and pectoral fin before proceding down the dorsal top of the soldier. One must run the knife from the head to the tail, ie: with the lie of the scales, then across the tail section. After that he again started from the back of the head and cut toward the vent and down to the tail, bypassing the very thin belly flap. Thereafter — continually wiping his knife and work area — he sliced right up against the backbone to remove the fillet in one full piece.
It looks so very easy when you’re watching a master at work!
The skin can be removed by laying the fillet skin-side down on the work surface, then — using a flat skinning knife — insert the knife between the skin and fillet at the tail end and skin the fillet in one pull of the knife towards what was the head side. This removsboth skin and scales in one fell swoop. The fillet can be presented whole or sliced in half as shown in the accompanying photographs.
Always ensure that no scales are left on the open flesh.
Many of Daryl’s customers want the head and some even the remaining carcass. The head is usually required to be cleaved in half which is accomplished from the underside of the head.
It literally took Daryl eight minutes to do the whole job and that was with all the stopping to take photographs along the way.
The next question I had was how and he suggested people cook these various options.
The option with the skin on (with or without the scales) allows for cooking on the braai. This method is becoming more popular than pan frying or baking. Some people believe the scales protect the skin from buring while others enjoy the crispy skin when the fillet has been scaled but the skin left on.
Daryl offers a word of caution though — when braaing any fish do not overcook the flesh or let it stick to the braai grid that is far too hot. His rationale is that on the braai a chicken has a lot of bones so why wory about a few bones from a whole or filleted fish on the braai?
The cross cut bottomfish like the “half kob” shown above is popular for braaing as well as pan frying in masala for use in a fish breyani. The age-old favourite of a lightly flour-dusted and egg-dipped fried fillet still makes for an unbeatable meal especially if eaten as soon as it comes out of the frying pan. This white, delicate flesh is delicious.
Here are a few tips from Daryl regarding cooking or braaing of fish:
• The fish must be super fresh and well looked after prior to cooking. Don’t just put a fish fillet on an open plate in the fridge for a day or two before cooking. It will tend to dry out and toughen up and if held for a long period tends to have a stronger taste.
• Don’t overcook fish. A fillet must just be cooked through, apart from fresh tuna which should be seared on both sides with the centre still mildly pink.
• Do not over spice fresh fish. In Daryl’s opinion this spoils the natural taste of succulent fish flesh. If anything, just add a pinch of salt and a little black pepper to the flour before dusting the fillet.
• Use a plain butter sauce for basting when braaing or straight pan frying without batter, but only after first searing the fillets or cutlets.
• Each fish species has a unique taste and texture, so enjoy it as it’s supposed to taste.

TAKE OUR SURVEY AND WIN!