WHERE have all the longfin tuna gone? This question recently came to mind while I was reminiscing and watching the African bush TV —our campfire — deep among Namibia’s red dunes of the Kalahari. Indeed, where had they gone, this tuna species that was so sought after by offshore sportfishermen from the late 1950s until well into the ’90s.
At the time this gamefish species ticked all the boxes — it was highly rated as an exciting fish to target socially, competitively and commercially. Targeting longfin required sport anglers to venture far out to sea off Cape Point, and considering how basic the ski-boats of that period were, the “big boats” based at Simons Town were really the only viable option.
During the early part of this period offshore angling was clearly separated into two very distinct fraternities — the big boats and the ski-boats. So much so that two offshore angling associations were founded — South African Gamefish Association (SAGFA) in 1957 and South African Ski-Boat Angling Association (SASBAA) in 1958.
SAGFA was for the big boat boys who operated primarily from Cape Town’s Marlin and Tuna Club based at Simons Town harbour and Natal Deep Sea Rod and Reel Club from Durban Harbour. A limited number of big boats were also based at East London, Port Elizabeth and Lorenzo Marques, thereby spreading this association’s appeal across South Africa. Add to this the marlin fishery at Santa Carolina and the sport extended its brand of offshore fishing to include anglers in what was then Rhodesia who travelled to Moçambique to target the marlin.
During this period SASBAA bonded together the many clubs formed after the Second World War that largely catered for skippers operating craft in the 14ft to 18ft category which launched directly into the surf or from protected launch sites. That covered the whole coast from Zululand to the Cape West Coast and primarily concentrated on the inshore sportfishing anglers who targeted both pelagic and demersal linefish species.
To fast forward a bit through history, as ski-boats grew both in size and sea worthiness and “big boats” remained limited and were slow to get to distant fishing grounds, the disparity between the two fraternities narrowed exponentially. After a while the only “gulf” between the two associations was the stubbornness of the old guard of both sides to capitulate. That stubbornness was eventually overcome and in 1987 the two combined to form the South African Deep Sea Angling Association (SADSAA). Over the last 32 years this association has dismantled the big boats vs small boats scenario and has concentrated on strongly promoting the sport of ethical competitive sport angling.
The transformation of ski-boats in overall length from the 18 footers to the 30 footers and larger — while still following the same launching style they did 40 or even 50 years ago — enabled offshore anglers to target a number of the pelagic species which were previously out of range of the smaller boats.
This was very much the case history of the longfin tuna.
When we read the writings of Nick de Kock and Brian Hunt during the 1990s which extolled not only the extent of this resource but also the fighting ability of these fish that grew up to 30kg-plus, one appreciates the draw to target these tuna competitively as well as recreationally.
In the early to mid 1970s a number of us ski-boaters became aware of big catches of these tuna when SAGFA ran a national annual competition targeting these fish way out off Cape Point. The catches were so good that SASBAA incorporated Cape Town as a venue for its annual national inter-provincial competition. The committee believed that there were sufficient ski-boats in the 18ft category and enough experienced skippers to carry competitors from all the provincial associations of SASBAA to competitively target longfin tuna.
Bear in mind that at that time ski-boats were not equipped with the niceties we have today — there was no radio, no GPS, no sonar; all the skipper had was a handheld compass. After a few years the “sum log” was introduced. Much like the device we used to have on the front wheel of a bicycle that clicked over each metre that was cycled, the sum log used a propeller attached to the craft’s transom to give the approximate distance travelled. Much later a radio direction finder was introduced that provided distance and direction to the closest lighthouse or land base station to the port of exit. With Cape seas being what they are and the dense mist that was commonly experienced during the return run into Hout Bay or around Cape Point into Rumbly Bay, it made for interesting boating, and the radio direction finder was a great help.
In the early years of the SASBAA Nationals the emphasis was on fun, and minimal rules were put in place. The two major rules were that there would be a mass start and a set time of lines up. No line class was mandated and anglers didn’t have to be at weigh-in by a stipulated time. Whilst teams were fiercely competitive, it was a case of catch as many longfin as one could and points were awarded based on the total weight of the boat’s catch at a point per kilo of total fish presented to the scale.
An example of the laissez faire attitude regarding rules was seen at one of the Nationals when a craft ended up off Robben Island instead of Hout Bay due to heavy mist and only presented their fish to the scales after 11pm that night. They incurred no penalty and everyone was just happy to see the team safe and sound. 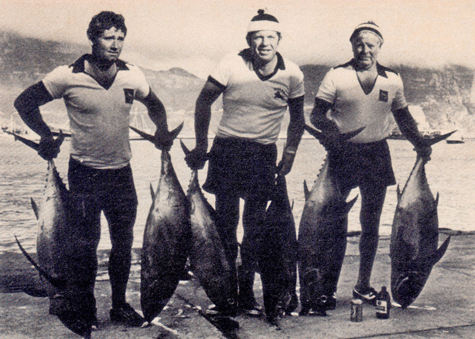 In 1980 the Natal team of Trevor Rapson, Dennis Mercer, Andy Vinnicombe and I saw our dream come true when we were selected to fish in the Tuna Nationals off Hout Bay.
Don’t laugh now! Our arsenal consisted of two ’cuda rods each, Scarborough reels and 30- and 40 lb line. We drew Black Sabbath, Hamish Fyfe’s 18ft ski-boat. He was thoroughly perplexed at how we planned to use the Scarborough reels, asking who was going to cut chum if the crew had to hold rods and Scarboroughs instead of lodging the combination in the rod holder as could be done if using a multiplying reel. Somehow we managed by rotating the chum cutting duty so that only one of us had dirty hands while the others controlled their Scarborough reels.
This style of chumming for tuna was very different to our Natal anglers’ usual method of angling, but once a fish had been hooked we had the ability to pull it extremely hard and get them to the gaff in a much shorter time — according to Hamish — than one could achieve with the multiplier of choice back then — the Penn 49A — on shorter and softer rods.
The run out into the deep which took at least two hours was new to us, and all we had to go on was Hamish’s know how and his compass. The only directions we got from our skipper were to “look for water colour change and feeding birds or an active commercial boat; then we pull lures until we have a longfin and then chum like mad.”
Mean Machines — preferably green — were the lure of choice. I don’t remember if we even had diving lures at that stage.
This was the first time any of us had witnessed a shoal of longfin 15- to 30kg in size swimming under the boat like penguins, with their wing-like pectoral fins, inhaling the blocks of chummed sardines. It was extremely exciting as one could watch a longfin swimming in the chunks we were letting out. We even pulled the chunks away from small fish hoping that a bigger fish would decide to eat.
On the very rare occasion that a big yellowfin tuna appeared in the chum we were advised to whisk the chum bait out of its mouth. We were told not to waste time fighting these 50/60kg brutes when we could double or even treble our score by doubling or trebling up on longfin. Believe it or not, on Captain Rapson’s instruction I straight-sticked a big yellowfin. At the time I was bitterly disappointed as I had never caught a yellowfin anywhere near the size of the fish I had had to part on.
This sort of “frenzy fishing” which got us all so excited, lasted until the late ’80s. Don’t get me wrong, not every day was a bonanza, and often — as with all types of fishing — today’s large haul did not mean the next day would produce the same excitement. Quantity varied with each annual season and of course the Cape’s notorious weather often prevented the craft of the size we were using from getting to the tuna fishing ground 30 to 40 miles out to sea.
The commercial handlining and poling boats were numerous, and because they overnighted until their hatches were full, the majority of the local ski-boats targeted them, knowing that was where the longfin were shoaling.
Longfin tuna or white flesh tuna was in big demand, especially with the local tuna canning factories which would not accept yellowfin at all.
The net result was that yellowfin were not targeted as they had no commercial value.
I need to add that when the Nationals were held in Cape Town in those days the total catch was absorbed by the canning factory and the costs of running the 14-odd competition boats was largely offset as a result.
How the system has changed! Nowadays the longfin tuna, although still sought after by the far-ranging commercial fleet, is just considered a “nice” bycatch and is certainly not targeted by recreational craft to the extent they were in the past. And that’s all because one fish’s value suddenly escalated exponentially, with the high yellowfin tuna demand from the sushi market.
From the competitive perspective, with the introduction of line class fishing and the point structure dependant on the size of fish landed, there was initially a big move towards light lines when targeting longfin. As it was a strong, clean-fighting premier gamefish, especially on light tackle, a cult of anglers developed who preferred the art of catching a lot of longfin on 6-, 8- and 10kg class tackle. This became the norm and resulted in numerous world records being established due to the world class fishery in terms of longfin tuna found in Cape waters.
Sadly the reality is that consumer demands have dictated that yellowfin tuna is now the premier species targeted by both commerical and recreational anglers in the tuna-rich waters off Cape Point. The longfin has been sidelined completely and is now a minimal recreational bycatch at best. 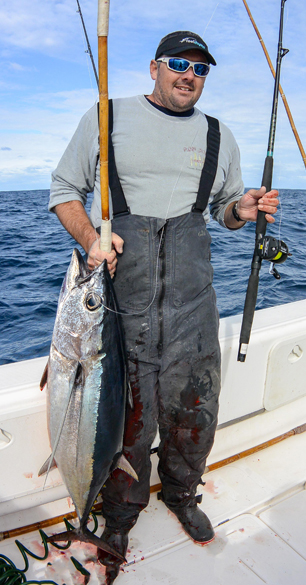 There is no denying that catching a giant yellowfin tuna with the aid of most technically perfect fishing reels and matching rods using braid line is one of the greatest prizes and experiences any big fish sports angler can experience. Bringing alongside a yellowfin in the mystical 100kg class is an experience that will not only top most others in the area of sportfishing, but will also provide a memory that will last a lifetime.
In a final salute to the longfin tuna, I must unequivocally state that the few of us around today who witnessed and fished among the “dik” longfin shoals have memories that have lasted decades. Sadly not many if any of the current anglers will experience that in their lifetime of fishing to come.

Left: Sean Todd with his 21kg longfin tuna caught on 3kg line — the current world record in that line class.

Watch this Catchcook.com video of Chris — Primal provider #113 — catching a longfin at the Canyon off Cape Point in June 2019. <www.youtube.com/watch?v=pAV2rFoiyOg>