RED Steenbras (Petrus rupestris), or “coppers” as they are affectionately known, are prized catches among recreational and small scale fishers alike off the east shores of South Africa. They are known to reach weights over 100 lb and are renowned for their dogged fighting ability that will test even the most skilled angler’s technique and tackle to the limit.
Sepia-tinged memories will recall a time when these fish were caught in vast numbers from shore and boat, the former a distant memory of days gone by for all but the lucky few. As a child I was obsessed with this iconic predator of the deep. Perhaps it was the stunning pink hues they don or their reputation or scarcity — likely a combination of all three. I spent hours staring at pictures of men in suits and ties with primitive tackle, nonchalantly hovering around heaps of coppers big and small, dreaming what it might have been like to be around in that day and age. 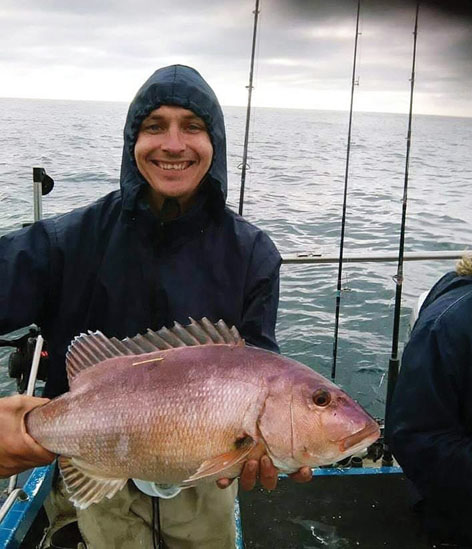 In September 2015 I enjoyed a day out at sea with Org Nieuwoudt, an experienced Gouritsmond skipper-cum-conservation-advocate. On that day I was fortunate to land my first decent sized copper — a 61cm fork length beauty [pictured above].
Org and I worked quickly to get her measured, tagged and released. We also made a shallow puncture in the abdomen of the fish to help it descend back to its rocky habitat some 30m below. This was to be the start of a good thing as Org soon became a regular ORI tagger, often educating his charter clients on the values of the project.
One lucky angler got to witness this first hand. Andries Riersma was fishing with Org in early January 2020 when he recaptured my originally tagged red steenbras more than four years later, on exactly the same GPS co-ordinates.
Personally I found it nothing short of thrilling to see how the adolescent copper I caught had developed the hallmark yellow colouration characteristic of the larger specimens. The fish had grown from 61cm to 93cm.
Coppers are incredibly aggressive by nature, a trait that had, until recently, relegated this all-conquering reef dweller to the prohibited list. They are often first to the bait and usually the angler with the biggest, ugliest offering will be the first to “go tight”.
The complete ban on catching red steenbras has since been lifted and recreational anglers are now allowed one fish of 60cm or larger per day. However, those anglers with any inkling of conservation ethics will agree that these majestic predators are too precious to end up on the dinner table.
The idea of slot-limits is a notion that’s gaining momentum and could be implemented as a condition to the bag limit of coppers and other species slow to sexual maturity. The powers-that-be would do well to look into this option as it would keep the “catch and cook” contingent happy while protecting the larger breeding specimens.
Fortunately a general shift in consciousness seems to be under way among a healthy portion of the general angling public. Nowadays catch and kill en masse efforts are largely a thing of the past, with there being a stigma attached to such efforts and the anglers being branded destructive and wasteful as opposed to how in the past it was seen as heroic or admirable. Social media has also played a large part by calling anglers out for going over bag limits and creating general awareness around conservation practises.

ENSURING SAFE RELEASE
Although releasing fish is a step in the right direction and is in itself admirable, it is important for the angler to understand that release efforts are inevitably futile if they’re not administered correctly, particularly with bottomfish.
Coppers, like many reef fish, are considered demersal (bottom-dwelling), compared to pelagics which roam a wide range of depths. Unlike pelagics, demersal fish are not adapted to handle a rapid ascent of the water column. Stark pressure changes experienced by the fish while it’s being hauled up cause internal gases to expand. This creates tremendous pressure on the fish’s internal organs, a syndrome known as barotrauma. When they’re bloated like this the fish cannot get back down to their normal home depth and just float on the surface until their almost certain death. They thus need help getting back down. 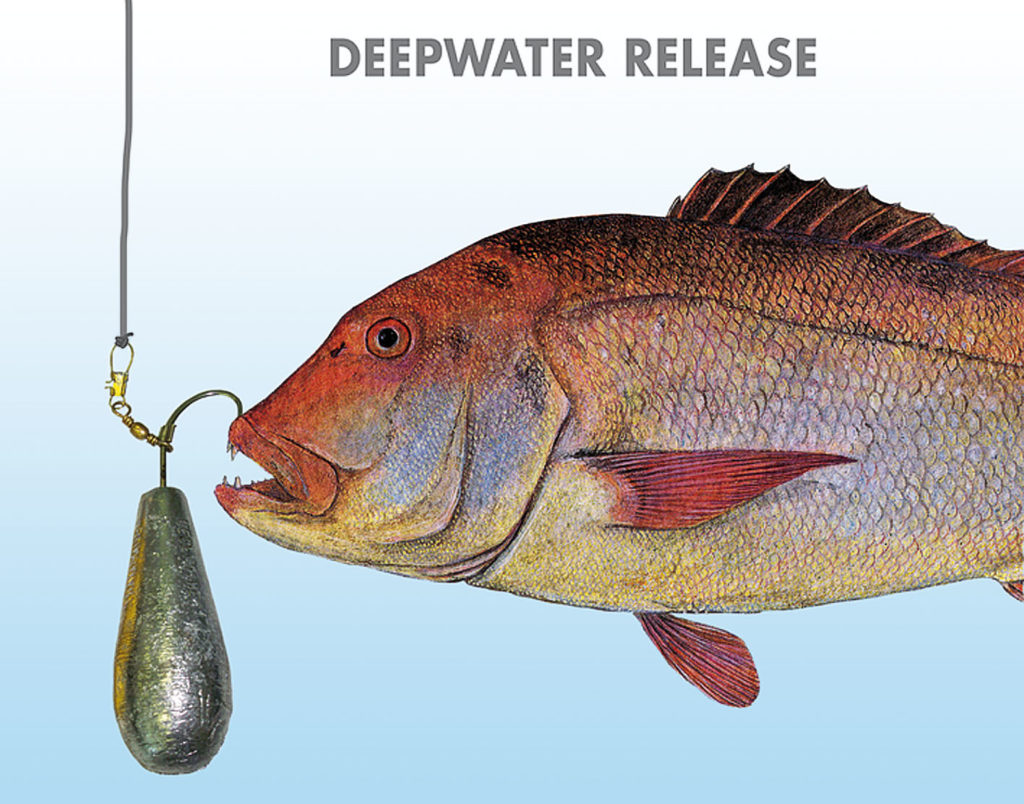 One option is “down-rigging” the fish by by using a release-weight. A barbless hook rigged with a heavy weight is pushed through the fish’s top lip (see diagram) and takes the fish down quickly; the barbless hook can be dislodged easily with a tug of the line when the fish is at the bottom. One can also use a Seaqualizer to do this job — a purpose designed piece of equipment.
The whole idea of this method is to avoid pricking or venting the fish and to allow the weights to take the fish back down to the depth where it was caught. The pressure at that depth recompresses the gas in the swimbladder back down to what it was before the fish was bought to the surface and allows the fish to swim off without being buoyant. This systems works very well if you are set up to do it on the boat and is non-invasive, but the strong surface currents in areas where red steenbras are found often makes it difficult to successfully use this sytem.
As most anglers know, when the gas in the swimbladder expands it often forces the stomach inside out and it sometimes protrudes from the fish’s mouth. According to Bruce Mann, senior scientist at ORI, in some fish species such as soldier/santer and seventy-four, the fish themselves bite their own stomach thereby releasing the gas and enabling them to swim down after release, even if caught in very deep water.
In order to give red steenbras or other bottomfish a better chance of survival anglers need to release the expanded gas present in the abdomen thereby lowering buoyancy and allowing the fish to reach the depth where it normally lives.
When it comes to this aspect Org has some more concise advice: “Honestly anglers need to do more than just taking the fish down deep with three or four 6 oz sinkers. We use our normal tagging equipment to pinch a small hole in the fish’s stomach to release the oxygen.
“It’s vital to release the oxygen prior to dropping the fish down to the bottom because if you don’t release the oxygen the fish will just come up to the surface of the water a short while later and you will not even notice it because of the current. If the stomach is visible or protruding out through the mouth it’s easier to puncture, but if not you must puncture the stomach or swim bladder through the fish’s skin.
“When I drop the fish to the bottom I leave it to recover for a couple of minutes before I unhook it.”
Note that the position of the swimbladder is approximately in line with the top of the pectoral fin and halfway between the pectoral fin and the anus,but it varies in each fish so do some homework on where you need to insert the needle to puncture the swim bladder without causing more damage.
It is good practise to implement sensible handling techniques to improve the likelihood of survival of any fish. These include:
• Keeping the fish wet at all times and taking it out the water for as short a time as possible, if at all.
• Assisting revival of the fish until it swims off.
• Minimising the fish’s time out of the water.
• Using barbless or circle hooks.
• Being prepared. Ensure all necessary equipment — release weights, tag applicator etc — is ready at hand.
• Don’t touch the gills at all as they are very sensitive.
For more information on ORI tags or if a tagged fish is caught contact Gareth Jordaan on <oritag@ori.org.za>.
For a great sustainable deep sea fishing experience contact Org Nieuwoudt via <www.gouritsfishing.co.za>. 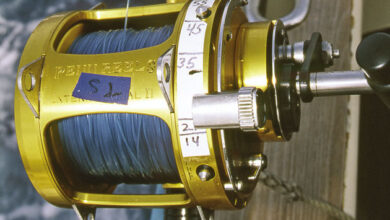 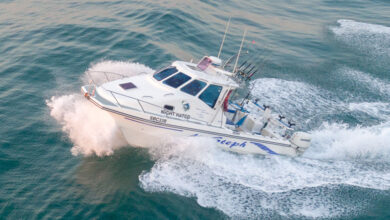 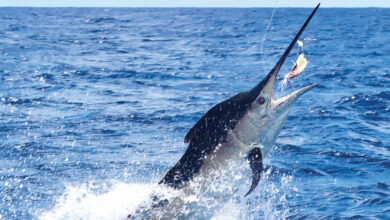 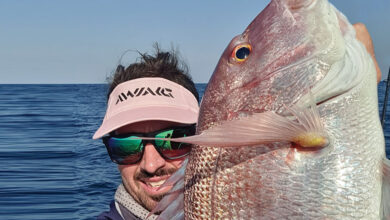 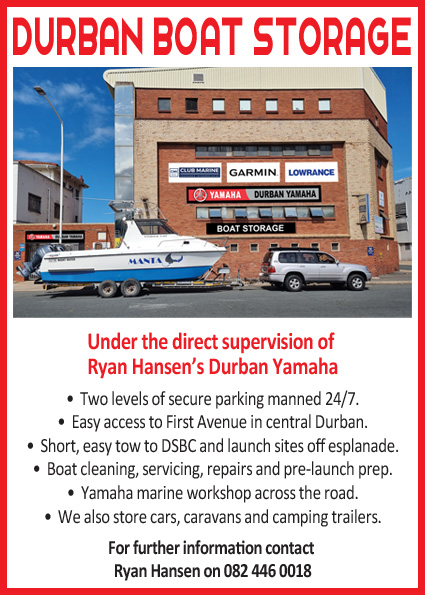 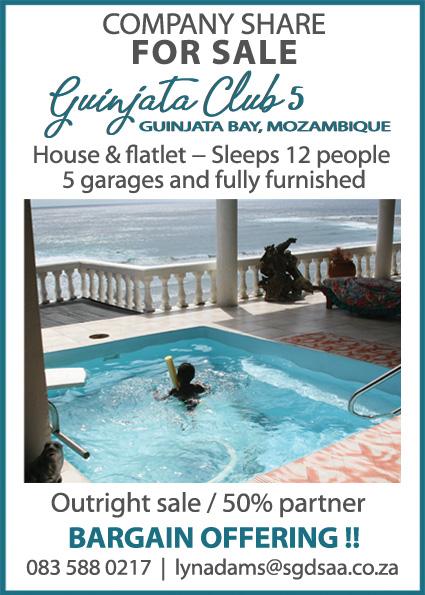 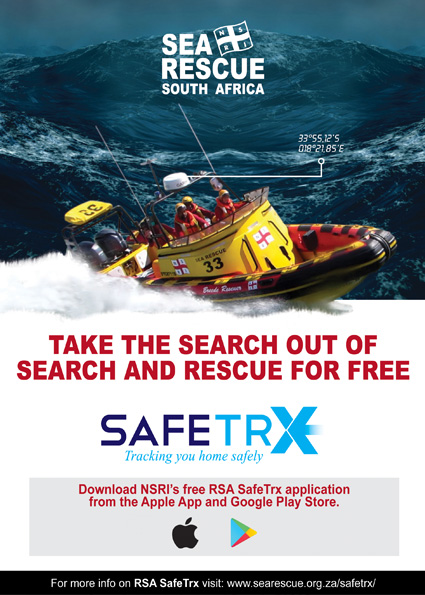