[Originally published in the May/June 2020 issue of Ski-Boat]

KNOWLEDGE about area use by freshwater fishes — such as for feeding, spawning and colonisation of new habitats — is important for managing fish populations. In Africa, there is scant information on area use by most freshwater fish species and this has constrained the effective management of many fishes. This is concerning because many fish populations have come under increasing pressure and declining catch rates, particularly of the larger, more valuable species is evident in many systems. One of these species is the African tigerfish Hydrocynus vittatus, a large predatory fish species that is endemic to the African continent, is important in small-scale fisheries and, is one of the most sought-after species by recreational anglers.
In an effort to improve management of freshwater fish species in Namibia, the Ministry of Fisheries and Marine Resources, in collaboration with the Norwegian Institute for Nature Research (NINA), the South African Institute for Aquatic Biodiversity (SAIAB), the University of KwaZulu-Natal, the University of Namibia and, and Namibian Nature Foundation combined their resources to determine whether freshwater protected areas (FPAs) could be an effective tool for the management and conservation of this species.
Freshwater protected areas are a promising management and conservation approach for freshwater fishes. FPAs are modelled on marine protected areas where benefits, including the spill-over of fish from protected areas to increase fish biomass and yield in adjacent fished areas, are well documented. To be effective, FPAs need to afford protection for a considerable portion of the lifetime of a fish and knowledge of the life-history, movement and migration behaviour of the target species is required if FPAs are to be designed appropriately.
During the study 49 tigerfish were caught with standard recreational fishing gear and tagged with radio transmitters (approximately R3 000 per transmitter) in the Mahangu Game Park area of the Kavango River. Of the 49 tagged tigerfish, data from 14 tagged fish was excluded from the analysis because 11 tigerfish could not be located for the whole period, one tigerfish was caught by a crocodile, and two more tigerfish were reported recaptured by anglers. The final dataset, therefore, comprised 35 individuals. 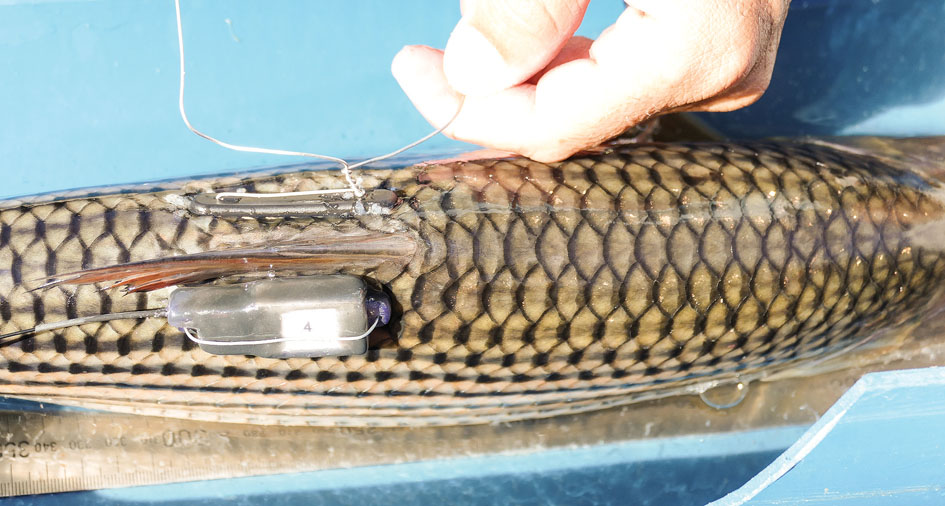 Tigerfish were manually tracked by boat and light aircraft in the core study area of 33km every 12 days from July 2016 to May 2017 for up to 246 days. In addition, 14 extended surveys were carried out for up to 680km to determine the total area use of the tagged individuals.
Twenty-three (66%) of the tigerfish had high site fidelity, using an area of less than 33km of river, whereas 12 tigerfish (34%) undertook long distance movements of up to 397km upstream and 116km downstream from their tagging locations. This substantially exceeds the previous estimate of individual means that ranged from 0.5–105.9km river length recorded in the Zambezi River.
The distance of 397km by an individual tigerfish documented during this study is currently the furthest movement recorded for any potamodromous fish species on the African continent. Although smaller pelagic species such as Brycinus leuciscus and Alestes baremoze in the Niger River were believed to migrate similar distances, during the time of those studies (1952) the technology to accurately record freshwater fish movements simply did not exist. It is plausible that other freshwater fish species can move similar distances, but behavioural ecology studies on freshwater fishes in Africa is scant.

During the long-distance movement, tigerfish crossed the territorial boundaries of Angola, Namibia and Botswana which highlights the need for international cooperation in the management of this species. The river use recorded during this study further indicates that a portion of the tigerfish population may be migratory while others exhibit residential behaviour. Migratory and residential behaviours are important within the same species as this promotes genetic diversity, and are considered highly important in the formulation of conservation and management strategies, especially concerning the protection of local tigerfish stocks and special habitats.
Of the 35 fish that were monitored, 40% spent more than 80% of the monitored time in the 33km study area and 51% stayed within the study area for at least 50% of the monitored time. These findings suggest that freshwater protected areas may be a useful management tool and we predict that a protected river area of 2–5km river length could protect 25.9–34.6% of the population for at least 75% of the time, whereas protection of 10km river length could protect at least 50% of tigerfish for at least 75% of the time.
This suggests that FPAs would provide some protection to at least a portion of the tigerfish population in the river. It is essential that FPAs incorporate the lateral and longitudinal connectivity of the river system required for a species to access habitats required for spawning and feeding, and accounts for the human activities in the area under consideration. In this regard, we note that the recommendations of the current study are limited to recommending the size of potential FPAs based on an assessment of area use by tigerfish. Ultimately, recommendations on the optimal design and placement of FPAs will require additional research to elucidate on the linkages between the biological habitat requirements of tigerfish (e.g., for spawning and feeding), their movement biology, and the risk that interactions with human activities pose to the maintenance of these biological processes.
Furthermore, there are at least 30 tourist lodges situated next to the Kavango River in Namibia and Botswana. The majority of these lodges offer recreational fishing for tigerfish and are directly benefiting from healthy tigerfish populations. From this study it is clear that the local subsistence fishermen living next to the Kavango River and recreational anglers at tourist lodges share the same tigerfish resource. Therefore, the decline in tigerfish populations could cause further conflicts between stakeholders of the Kavango River that are often dependent on one another. Increased conflicts between subsistance fishermen and recreational anglers have occurred along the Zambezi River and this has been attributed to the declining fisheries.
Fairly recently the first community-based fish protected areas were established within the Sikunga (Sikunga channel) and Impalila (Kasaya channel) conservancies on the Zambezi River, Namibia. Following the successful establishment of these fisheries reserves, several areas on the Kwando River have also been identified by communities and are currently in the process of being Gazetted, as are two areas on the Kavango River.
These protected areas are co-managed by communities and function on the same principle as conservancies in Namibia, and may be the only viable option that can ensure tigerfish (and other riverine species) populations remain viable.
In conclusion, we could see that tigerfish cross the territorial boundaries of Angola, Namibia and Botswana which emphasises the need for cross boundary initiatives and ideas. We are therefore working to ultimately promote the establishment of FPAs over the entire SADC region to ensure that our rivers remain sustainable for future generations.

The scientific article “Implications of the movement behaviour of African tigerfish Hydrocynus vittatus for the design of freshwater protected areas” can be downloaded from the Journal of Fish Biology. https://onlinelibrary.
wiley.com/doi/10.