[Originally published in the September 2020 issue of Ski-Boat magazine] By Rob Naysmith, Down South Marine

THERE is something almost spiritual about feeling the water move beneath your feet, and never has this been more evident than since our release back onto the waters after lockdown. It highlights how much our personal wellbeing depends on owning a boat or having a best friend who owns one. This makes it even more important that we spend some time getting to understand the boat and, despite what others may say, it is never wasted time.
I have left some of the most important aspects of a boat to the last, hopefully bringing everything together to show how each part mentioned, becomes an intricate part of the whole. So, let’s not waste any more time — we have fish to catch….

LENGTH
I’m often asked where the actual length of a boat is measured. The term used is LOA (length overall) and it is a straight line from the tip of the bow to the centre of the transom, excluding any bow-sprits, railings, engines, outmounts or anything that may protrude fore or aft; it is only the hull that is measured.
There is another common measurement in boating, although we ski-boaters seldom refer to it, and that is the LWL (Loaded Waterline Length). This is the measured length of the boat’s hull at water level, when it is lying, fully loaded, on the water — again, bow to transom in a straight line.

BEAM
The beam of a boat is measured from outside edge to outside edge of the gunwales at the widest point. The wider the beam of a boat in relation to the LWL, the more stability the boat will have on the water. But remember that there is a limit, mostly regulated by the National Road Traffic Act. A trailer may have a maximum width on the road, of 2.5 metres, so the trailered boat may not have a beam wider than 2.5m.

TRANSOM HEIGHT
Another common, and particularly important, question is about transom heights and what shaft length outboard engine is required. Basically, the shaft length required is determined from where your outboard sits on the transom, to where the cavitation plate is in line with, or slightly below the bottom of the hull. The cavitation plate is that big fin that sticks out just above the propeller.
A simple rule of thumb is that a transom height of 20 inches requires a Long or Standard shaft engine, a 25-inch transom requires an Extra Long shaft and 30 inches an Ultra Long shaft.
However, there are ways to make an engine fit — either raise the engine using its mounting bolt holes, raise the height of the transom or notch out the transom to reduce its height.
If you choose to raise or notch a transom, make sure the work is correctly glassed and sealed to avoid any water getting into the transom timber. Also remember that there is only so much you can notch out of a transom before your engine lives under water, so be careful.

OUTMOUNTS
Occasionally you will find a boat with outmounts and wonder what purpose they serve. Outmounts — also referred to as “hull extensions” — were designed to allow more space in a boat and give one the ability to raise the transom height to that of the gunwales. Outmounts are metal brackets, either stainless steel or aluminium, which are bolted to the transom of a boat, extending the distance of the engines from the back of the boat. There are advantages and disadvantages to fitting outmounts, you just have to figure out whether they will be suitable for your boat.
A big advantage of outmounts is that they allow the engines to run in cleaner, less turbulent water. This reduces propeller slippage, increases efficiency and often reduces the horsepower requirements.
The downside is that when you add the weight of the outboards the balance is moved further back. In many instances this makes the transom lie deeper in the water at rest, and that results in the deck flooding through the scuppers and the dunking of the engines which is not a good thing.
To solve this problem a flotation box is fitted around the outmounts, adding buoyancy which lifts the transom back out the water. However, this again presents another set of issues — the box needs to be shaped shallow enough to allow the boat’s wake to rise uninhibited up to the engines, failing which the whole concept becomes an exercise in futility … rather just go and buy a longer boat.
When fitting the engines to the outmounts they must be raised one inch for every one foot they are moved back from the transom. This is because the water compressed by the hull as it passes over it, rises again trying to find its mean sea level. This is known as the wake, and unless the engines are higher than they would be directly on the transom, they will be running too deep in the water. The wake also carries aeration which dissipates substantially before reaching the engines giving them nice clean water to power through. 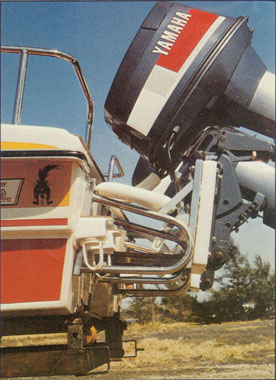 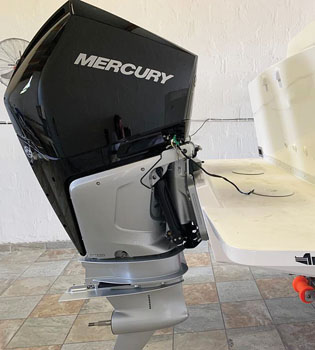 WATERTIGHT COMPARTMENTS
The function of a watertight compartment is to keep water out, making them buoyant pockets within the vessel. The most common watertight compartments are found below the deck, with each one an enclosed area separate from the next. Often one incorrectly refers to a compartment for storing various goodies whilst at sea, as being watertight when they are really just splashproof. Anything with a plastic hatch in it, whether round or rectangular, is not watertight, no matter what they say.

BUOYANCY
One of the most important aspects of a boat is its ability to stay afloat when everything else has gone wrong. A floating boat means you have a life raft, the vessel and some of its belongings can be recovered, and it gives the search parties something sizable to find. So, let’s first get to understand the difference between buoyancy and flotation and how they work together.
Buoyancy is the upward force subjected by the water on an object, and the aim of a boat is to have a positive buoyancy to float. Without becoming too technical, a boat is only able to stay on the surface because of the shape of its hull, and yes, even steel and concrete boats float because of their shape. But fill them with water and they will all sink. A hull floats because it displaces water up to a point where the boat and the amount of water it displaces weigh the same; this is measured as buoyancy and shows as the waterline.
Now, when you add more weight to the boat it sinks deeper and the waterline rises as the buoyancy level is once again reached. Keep adding weight and eventually the water comes in over the gunwales and the boat can no longer float bcause it has lost its positive buoyancy.

FLOTATION
To overcome this sinking feeling we include what we refer to as flotation. How flotation works is that, because it stops the water completely filling the boat, it creates a positively buoyant section (a watertight compartment) within the boat. So even if you fill the boat with water, the positively buoyant section keeps enough water out so that the boat cannot weigh more than the water it displaces. The result of careful calculations and adding sufficient indestructible flotation ensures that the boat will theoretically be unsinkable.
The use of watertight bulkheads provides trapped pockets of air as flotation sufficient to keep the boat afloat. These are evident in many of the bigger sportfishing vessels and of course ships, however, a sufficiently powerful bilge pump is mandatory in each of these compartments. 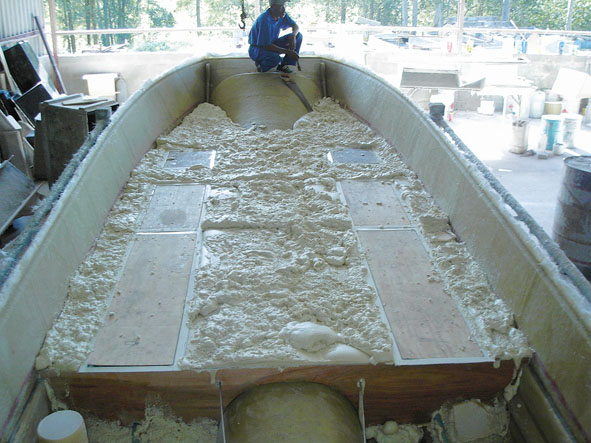 The pleasure boats and ski-boats as we know them, add flotation material to these watertight compartments between the bulkheads so there is even less chance of sinking. Although most flotation is secured under the deck, filling the gunwales and sides with foam greatly assists in ensuring the boat floats upright if swamped. Floatation media used in local boats is usually either sealed plastic bottles or polyurethane expanded foam.
We repair many boats that come into the shop with compromised or water-filled floatation. Never let anyone tell you that foam does not absorb water — it does, and once the water is in it’s almost impossible to remove.
How do you know if your boat has water in it, especially when you do not have drain outlets? Some of the first signs are that the boat feels sluggish, it doesn’t respond like it should, steering becomes more difficult and it lies deeper in the water. The negative impact is that your power is reduced while the fuel consumption skyrockets and the boat becomes dangerously unstable, especially in surf and big swells.
Here’s a bit of unwelcome news: if you have one of those little round “inspection” hatches in your deck, the type they insist you need for checking that you have flotation, you have water in your hull. I’m not one for bad news, so to cheer you up here’s some good news: flotation can be replaced, cracks, holes and chips can be fixed and boats can be made new again — we do it all the time.
In the past few months’ articles I’ve covered many of the different aspects making up a boat, including the sometimes seemingly irrelevant inclusions. It’s incredible to think that so many of the boat parts that we take for granted were, just a few years ago, not even considered as being beneficial enough to warrant design modification. You now have the knowledge to look differently at your boat and visualise how a few minor changes can enhance her performance and seaworthiness.

It’s been a pleasure writing these articles and the tremendously positive response we’ve received has been overwhelming, thank you. If you have any questions or comments please drop me a line at <rob@downsouthmarine.com> or phone 083 235 9550.
Watch out for our new boat to be launched in time for this summer; it’s awesome, and remember that everyone needs a second boat …

’BEK ON THE BOAT