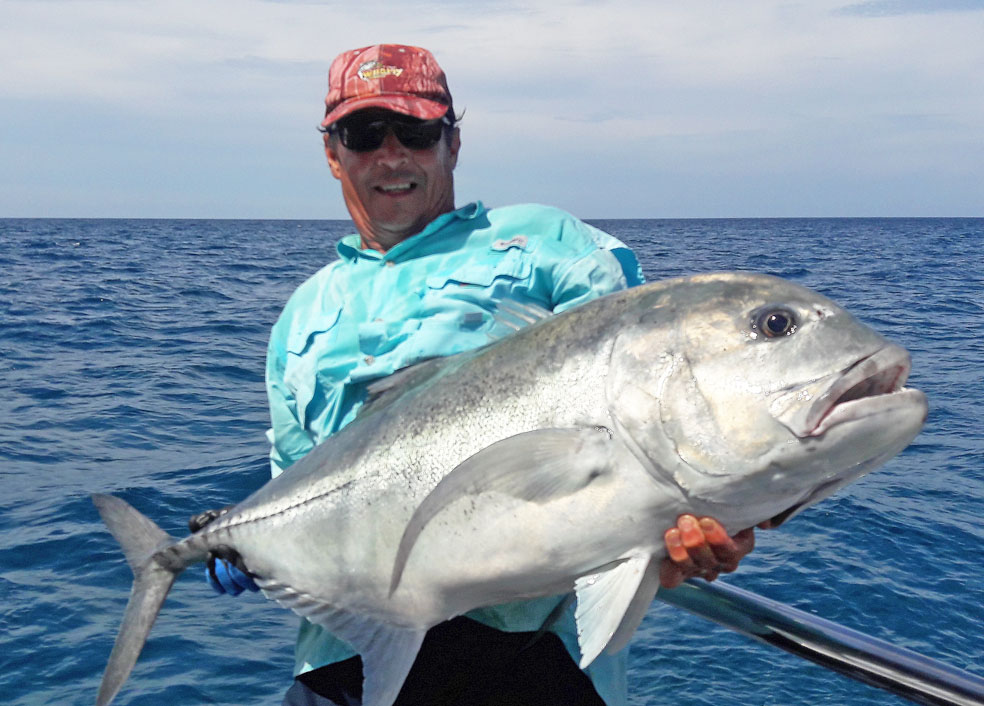 GOOD news for South Africa anglers is that Kilwa is once again offering great fishing — at a good price.
Mwangaza Hideaway opened in 2011 to service my fishing clients and we had a couple of successful years and plenty of happy anglers, but the toll from illegal fishing methods by locals soon started to take effect. From the sights in the early 2000s of 60kg-plus yellowfin tuna breaking the surface and 40kg GTs smashing anything thrown at them, fishing in Kilwa started dipping a bit around 2012.
Although the GTs weren’t targeted, the reefs and bait were being hammered. The fish simply weren’t there in the numbers that they used to be and the result was that catch returns went down and our enthusiasm diminished.
At the end of 2013 I signed a sale agreement for Mwangaza and the company boats, and soon we were changing fishing vessels into oil and gas supply boats for the inshore exploration along the south coast of Tanzania.
In late 2015 I took my 36ft Tomcat up to Tanzania and kept my hand in with the odd charter through 2016. We had some decent days, but still nothing like it was. Late in the year the new government started to take an interest in conserving the resource and major policing began. Heavy fines were issued and boats were being confiscated for dubious fishing methods. Things were looking up again.
February and March 2017 saw a good increase in the general fishing with more fish around of all species. I decided to fish October and November to see how it went and was reasonably well surprised .
Over Christmas the investors in Mwangaza Hideaway asked me to return to the business and oversee running the boating side of the company with fishing being the main activity. Based on what I saw over the previous few months and what I know the potential is, I started with a few charters through February and March.
Results were good with some fair GTs around the 20kg mark and a few bigger ones, plus more dogtooth tuna than I’ve experienced in a long time. Wahoo and the odd sailfish were also around and most afternoons small to medium yellowfin tuna were taken on spinning gear which is always fun. There was a definite improvement from the previous year .
From May to August 2018 I will be renovating three boats for Mwangaza, then from 1st September we will be offering fishing off the Kilwa area. The good news is that we going to make it reasonably priced so anglers from South Africa can experience the area.
Our operation at Kilwa has very good local captains who know the area well and have been fishing these waters for many years. Once they’re ready the boats will all have a decent GPS/chart plotter/sounder and one of our local captains will be onboard to assist clients with anything from skippering the boat to simply showing them the best areas. Boats can be driven by the client’s nominated person, and if they choose to have one of our experienced expat captains guide the trip, that will simply come with an extra cost to the group.
Note to skippers and charter operators: This is an opportunity for you to get your crew or your favourite clients together and to come and captain the boat yourself; the captain’s fee then goes to you.
Kilwa is the doorway to an awesome fishing region with many species of gamefish around. The numerous reefs and atolls facilitate casting poppers and vertical jigging which can be very rewarding.
September is the best time for shoals of wahoo and plenty of GTs, while October and November offer the best sea conditions with most species around. Sailfish are best targeted during November up to mid-December. I don’t like to accept fishing bookings when the North Monsoon starts in mid-December as it can be a disappointing time wind-wise, but from the beginning of February to mid-April we again have very good months. Dogtooth tuna are around in their numbers throughout our season and time spent targeting these brutes can be rewarded with a fish of a life-time and definitely some stories about those that got away.
Kilwa is easily accessed nowadays with a tar road the entire way. SAA flies into Dar es Salaam and we have vehicles that will collect clients at the airport and drive them the five hours down to Kilwa. Flights are also available to Kilwa although they’re a bit costly. All options can be discussed and a trip tailored to the client’s needs.
Basically we’ve tried to make it affordable to visit our lodge and fish the rich waters that were previously only open to those who could afford the expensive trip. Accommodation starts at US$75 full board and fishing US$550 per day for the boat.
For further details contact James on Whatsapp +255 784 637 026 or email <james@fishing-tanzania.com>.