CATCHING Them Deep was the first article I wrote in the July issue of SKI-BOAT, directing attention to those of us who derive a huge amount of pleasure from targeting sportfish or reef fish as this style of fishing is described in the styles of angling practices taking place at sea under the auspices of the South African Deep Sea Angling Association.
Indeed, we get a great deal of pleasure from this style of fishing, but it also requires an inordinate amount of skill and knowledge if one is to achieve the goal of ending a day’s quest catching a few of the different species we hunt.
I firmly believe in not only finding one reef that is fish rich, but also travelling to many different areas along our length of coastline in the quest to find new and exciting reef structure and hopefully catch the species you have set out to find.
The more versatility you can cultivate, the more excitement you’ll have; it also gives one a greater sense of achievement when you catch a good specimen of the species you’re after. If this species is not caught in one’s own home hunting ground it’s even more exciting.
The red stumpnose, or Miss Lucy, is just one of the reef dwelling species that has tweaked my imagination and which drives me to the far reaches of the South African east coast in search of a good specimen to add to my bucket list.
The name Miss Lucy rolls off the tongue a little easier than the scientific name of Chrysoblephus gibbiceps which, roughly translated, means “golden eyed bulbous forehead”. This beautiful looking bottomfish is endemic to South Africa. It is truly an amazing fish to catch and probably one of the most sought after species among sport- and recreational bottomfish anglers from as far as Cape Point to East London and, of late, also on the Wild Coast in the Eastern Cape.
The male red stumpnose is easily identified by the large stump on its forehead which develops as it reaches adulthood; they have been known to live up to fifty years.
This species can be caught in depths ranging from 30 metres to 150 metres but are most commonly located in the 50- to 70m depth range. As with any form of hunting, the most important thing is location, location, location. Find the fish’s preferred reef structure and your chances of catching the fish you are after increases exponentially. 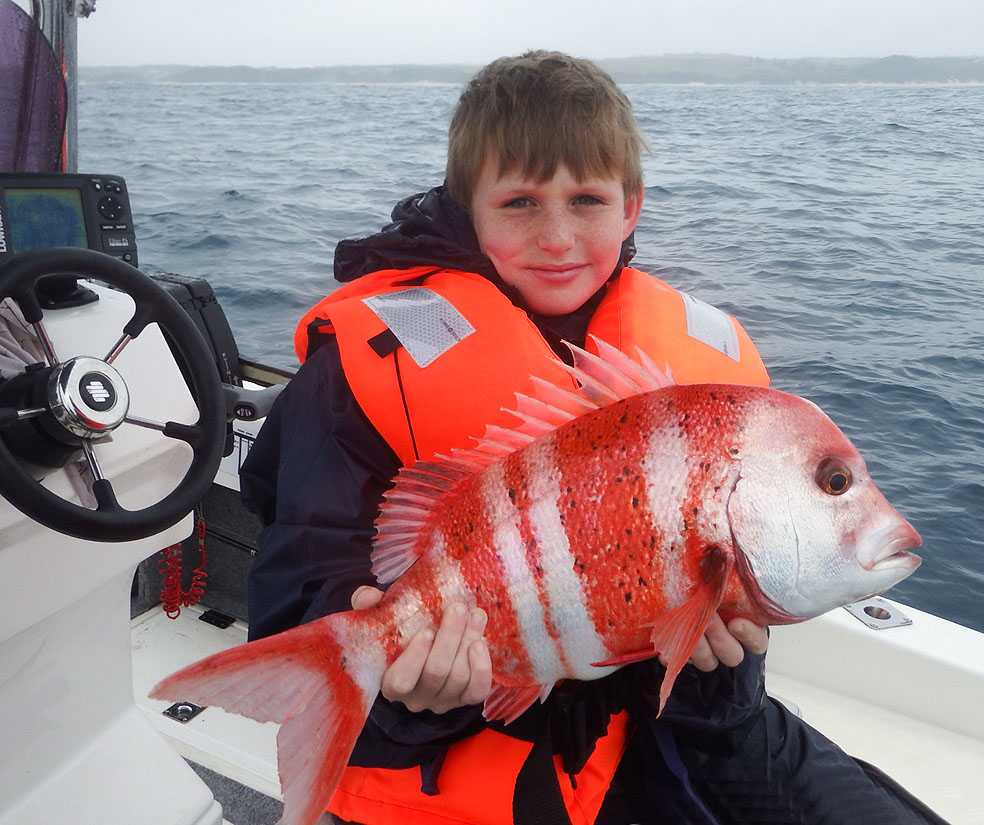 To find the reef, you need to spend a lot of time bottom scanning and need to know how to “read” and interpret what you are seeing. This aspect of offshore angling is, without doubt, the most important when bottomfishing. I often say that when I’m sounding a reef structure I get as much thrill seeing a big red plume showing on my sounder as I do when the fish pulls after going down.
When it comes to Miss Lucy, although they are territorial they do come into the shallow reefs along the Eastern Cape coast during the summer months to spawn. The juveniles develop a good set of molars while spending their first few years feeding on crabs, crayfish, sea urchins, red bait and their all time favourite — octopus.
Later on when they reach maturity (around 30cm in length) they tend to move to the deeper, bigger reefs. They seem to enjoy being solitary in nature and are not often found in large numbers in one specific place. They are slow growing in nature and have been measured up to 75cm; if you are lucky you could land one up to 8kg in weight. Once caught Miss Lucy is easily identified by its beautiful red and white stripes.The preferred rig for catching Miss Lucy is a slightly shorter hook snoot of about 25- to 30cm, with a slightly longer sinker trace to prevent the hook being caught in the jagged reef. A 7/0 Gamakatsu circle hook is recommended, but J hooks will also work. A single luminous yellow bead can be placed on the hook snoot.
I also subscribe to the modern trend of targeting reef fish on much lighter tackle than was the case in years gone by when crank and wind on 80 lb tackle was the order of the day. These days, due to SADSAA’s introduction of light tackle (6kg and 10kg class) in its interprovincial and national bottomfish tournaments many of us have found that not only is it a lot more fun fishing this way, but we are actually catching more fish. 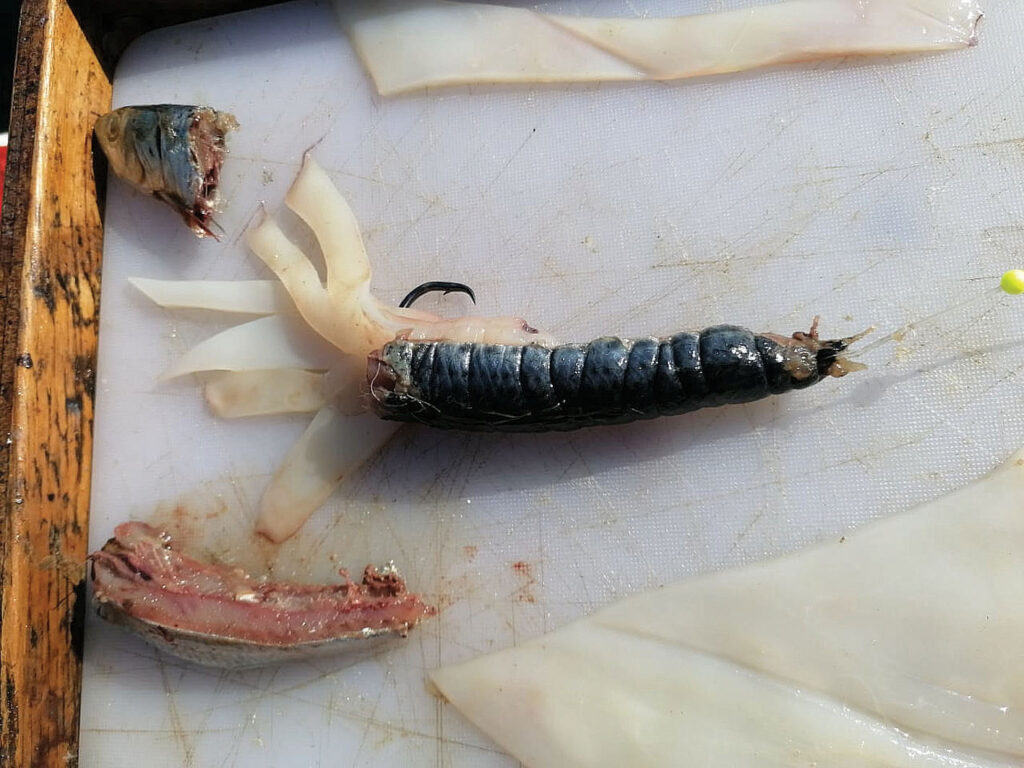 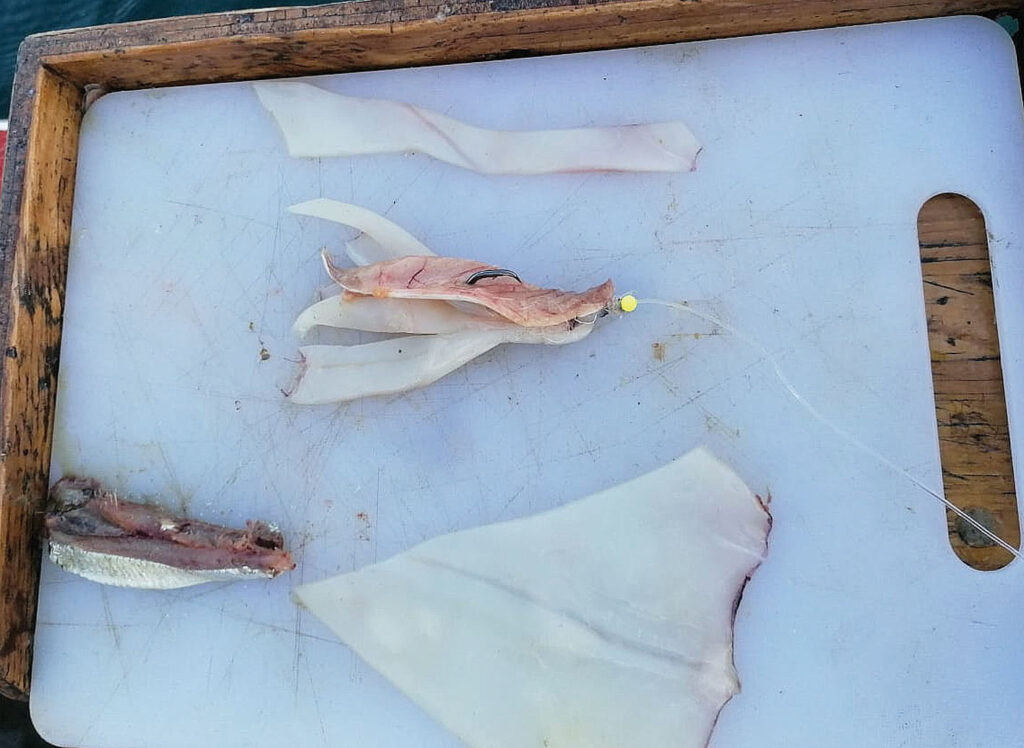 Although octopus is one of this species’ favourite foods, when it’s not available they will gladly accept a nicely presented squid bait cut and made to look like tentacles. You can also use ghost cotton to bind on a sardine fillet for extra taste if you want.
It is not common, but in summer months you can find a reef and catch more than one Miss Lucy on that spot. Generally they are aggressive when feeding and put up a tremendous fight once hooked. This makes Miss Lucy one of my favourite bottomfish to catch along our coast.
This species is also a very good eating fish and its flesh is of a fine texture.
Just a reminder that due to overfishing in the past this beautiful fish is listed on IUCN’s Red List for Threatened Species as Endangered, so it’s restricted to one per angler per day with a minimum size of 30cm. 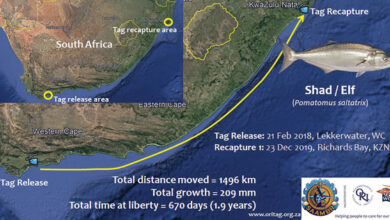