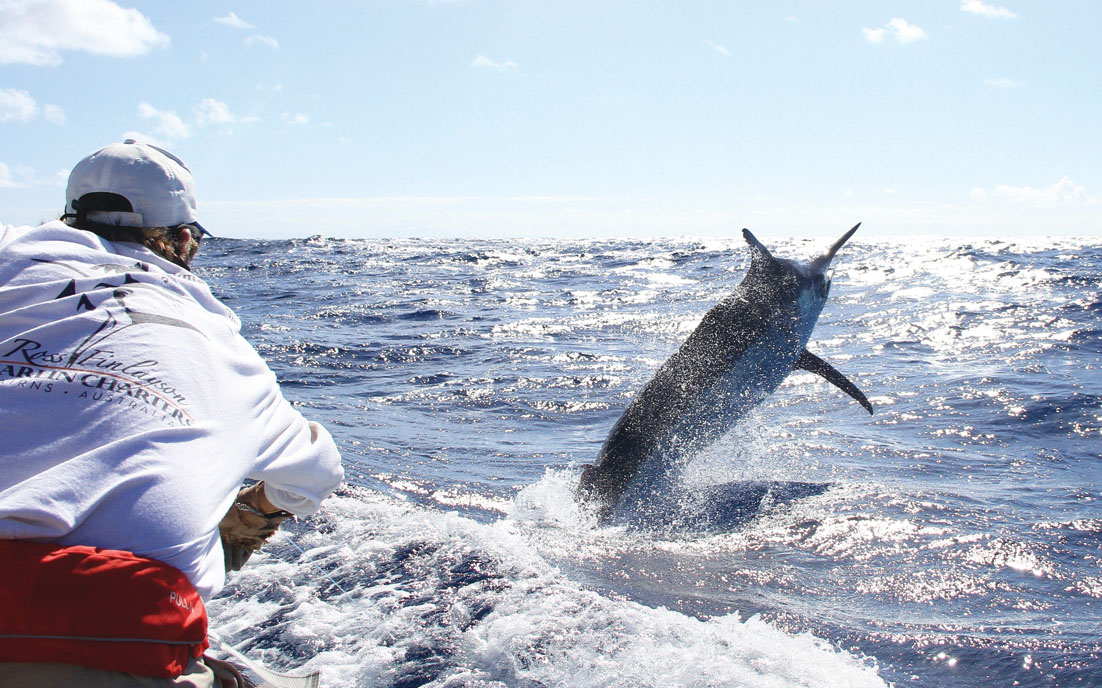 (Published in the March 2018 issue of Ski-Boat magazine)

STANDING braced against Top Shot’s transom with back-up spray covering the cockpit and the angler using all his remaining strength on the 130 lb rig while the giant black marlin gets closer with every turn of the reel handle is a mind blowing experience.
For at least 20 years marlin fishing has been my obsession. In order to fulfil my lifelong quest to learn all I can about targeting this species, I have continually gravitated to stories and articles about the grander black marlin off Australia’s Great Barrier Reef and the skippers and crew that hunt there.
My wishes were answered this year when a great opportunity came my way. Captain Ross Finlayson of the renowned Top Shot, and one of the Barrier Reef’s top skippers, asked me to work as a deckhand on Top Shot for the 2017 marlin season. Ross has targeted huge marlin in this area for the last 35 years, during which he and his original sportfisher Sea Baby and now Top Shot have acquired legendary status.
Gloved up I stood at the transom, the wire leader barely 5m beyond my grasp and at the end of that a giant black marlin. Stay focused, I told myself. Adrenaline was pumping, the excitement was overwhelming and, with trepidation, I took the initial grab of the leader and executed the initial wrap which would hopefully bring this great beast under control. Talk about David and Goliath — me weighing in at 90kg on one end and mama black marlin over 1 000 lb at the other end of 30ft of 450 lb wire leader. It was daunting to say the least.
This was one of the highlights of my life, even though I’ve landed many, many marlin. Bringing in a grander black marlin is the pinnacle of this sport and a factor hallowed amongst the deckies of The Great Barrier Reef who are rated according to the number of granders they have leadered.
Despite this excitement, my main aim during my stint on Top Shot was to learn everything I could possibly learn from Ross during the black marlin season that runs from mid-September to the end of November each year.
I share these snippets of information here in the hope that they will give the marlin anglers in South Africa an opportunity to appreciate the magnitude, the complexity, total dedication and absolute perfection of the top skippers and crews of the boats that fish the Reef for grander black marlin. You’ll be able to adapt many of these practices to your own “tackle box” of knowledge and marlin fishing adventures.
Having just returned from a full season decking very successfully in Cape Verde for blue marlin, I was bowled over by the difference in thinking and tactics on The Reef where the vast majority of marlin caught are blacks.
Our black marlin tally for the season was two over 800 lb, two over 900 lb, five over 950 lb and one monster weighing in at 1 128 lb. This is a big black marlin destination, as you can tell by the size of the fish that were caught over that period of time.
We also caught a large number of smaller black marlin — male fish that are around these big female marlin that are breeding. I would say that 90% of the marlin that we caught were blacks, and the remainder consisted of a few blues that we caught while trolling in deeper water.
Let’s take a closer look at the various facets of this fishery.

BIOLOGICAL FACTS
First and foremost it is accepted fact that the big female black marlin which grow to this formidable size arrive during this period to breed. Accompanying them are the much smaller male blacks which hover around a solitary big mama in a specific area, seeking an opportunity to mate.
With black marlin being a lot more shy than their blue counterparts, it takes a lot of persistence and patience to get these fish to come up in the water column from their preferred depth of 60-100 metres.
The topography of the traditional fishing area is in deep waters alongside the Great Barrier Reef and in the canyons that have formed tangential to the actual reef. (See map alongside.) The inshore current developed by the perpetual south-east trade winds congregates the shoals of baitfish into the top end of these canyons and this food source draws in the foraging big black marlin.

SONAR DETECTION
These days with the advanced technology incorporated into sonar devices the boat captains rely very heavily on “spotting” marlin and can differentiate between the big mamas and the two or three males generally hovering above the females. (See diagram alongside.)
When a sonar mark is picked up —ideally above the 80 metre depth as those are likely to come up to the surface — the captain will stay in that area, sometimes for the entire day. By trolling around in a pattern up to a kilometre over the marks, eventually one of the males will come up and attack a bait. With persistence, usually in the late afternoon, the big girl will come into the spread. The eventual ferocity of the strike when she decides to attack belies the supposed shyness of these fish and the time it takes to get them to rise in the water column.
What I learnt from this was the importance of using a sounder and the patience necessary over “marked” fish.
TACKLE AND HOW IT’S USED
The captains mostly use only 130 lb rod, reels and line, with them going to lighter tackle only on the client’s insistence when targeting for world records.
The heavy tackle is pretty standard, but the way it’s put to use and the make-up of the terminal tackle is very interesting and that’s what enables them to obtain the results they achieve.
Using heavy rods with bent (banana) butts and extremely sturdy fighting chairs is relatively normal, but when the Barrier Reef captains are trolling the rods are placed in the gunnel holders so that the rod tip is straight up as opposed to the way we run them when trolling lures. This way the rod tip is positioned a lot higher, and after breaking from a very lightly set rigger clip, the line is able to stay as high as possible above the water for longer. For the strike the reel is set on what they call a running drag, which is only there to stop overwind.
After a fish has eaten a bait it doesn’t swim off too quickly as it’s relaxed in its natural environment. After a ten second free spool the angler pushes the lever drag up to 10kg, then slowly increases the drag to 20kg, then 25kg, then 30kg. Once you feel the head shake on the tip of the rod, you generally know that the hook has turned into the corner of the mouth. The general rule is: No head shake, no hook up.
Only then, once the captain believes a hook-up has been achieved, is the drag reduced to below 10kg to enable the angler to remove the rod from the rod holder and reposition it in the fighting chair. Once the angler is harnessed and settled the drag will be increased to 20kg. Thereafter backing down on the fish is undertaken as soon as possible as captains prefer to fight a big fish as close to the boat as possible.
Unlike blues which run long distances after being hooked up on a lure, these big blacks seldom take more than 300 metres of line, but they are extremely dogged fighters.

TERMINAL TACKLE
Only Mustad 18/0 and 20/0 circle hooks are used. The 18/0 are used in the swim baits and stinger baits which are 2-5kg in size. (Stinger is what we call centre-rigged or Hong Kong here in South Africa.) For the big skip baits which range in size from 6-15kg, the 20/0 circle hooks are used.
These hooks are attached to the single strand “Aussie Wire” which is a hard, galvanised wire that has a breaking strain of about 450 lb; they use a piece less than 30ft in length and attach it to a ball bearing swivel clip on the end of a 10ft double line with a Bimini mono from the single to double.
Why, you may ask, do they exclusively use wire trace? I discussed this with Ross quite extensively. Years of experience has taught them that this rigid wire attached to the circle hook slides more easily through the scissors of the marlin’s jaw and that if the leader is caught in these scissors it will not be cut or damaged as is the case with heavy nylon leaders. A big black can exert enormous pressure when clamping its jaws, and over the last 40 years the single strand wire has proved it can stand up to that pressure.

BAIT
Careful bait acquisition, stowage and rigging is vital. Whilst the bait freezer on Top Shot will hold 500kg of bait, we ensured that at least 20-30 baits — both skip and swim — were either freshly caught that morning or thawed from the freezer stock, ready for deployment once we commenced fishing.
During a normal day on the reef, bait is targeted between 8am and 10am and thereafter it’s marlin time from 11am to lines up at 6pm.
Whilst baitfish are plentiful, so are the “choppers” when one commences fishing for marlin. A lot of time is spent trolling close to the reef and even though one is in 50-80 metres of water, the boat could be as close as 40 metres to the semi-exposed coral reef. The “choppers” — primarily very big ’cuda (king/mackerel) up to 50kg — decimate bait, so going through 20-plus baits a day is fairly normal.

TROLLING SPREADS
Black marlin are generally more shy than blue marlin, so the spread is set a lot further aft than we would pull lures for blue marlin. The other reason for this is that one is generally attempting to pull a black marlin up through the water colours.
Pulling the baits so far aft means the marlin is initially being attracted by the craft and then the big skip bait. By the time the marlin reacts to the excitement and swims up, the boat — trolling at 5- to 6.5 knots SOW — will be passing the fish, leaving the bait to divert its attention from the boat’s teasing action.
In general only three baits are trolled behind Top Shot. From the right rigger a swim bait is set approximately 50 metres behind the transom and usually runs a bait of about 1-5kg. From the left rigger, about 26 metres aft, they set a big skip bait of 6- to 15kg. The centre rigger is attached to the stinger bait of about 2- to 5kg which is skipped 66 metres aft of the boat.
While trolling, the deck crew — myself and Dave from Hawaii — had to ensure that the trolling pattern was maintained at all times. Ross is pedantic, saying a black will only eat a bait that is in the water, not one that’s lying displayed on the deck. Hence if a bait was “chopped” while one of us was reeling it back in, the other deckhand would be streaming a substitute bait to be clipped on to the line as soon as the “chopped” leader was unclipped. Then the remaining bait would be cut off and thrown back into the water so that the opportunistic chopper would focus on the bait head in the water and not keep attacking our swim baits.
In the May 2018 issue of SKI-BOAT I’ll cover fighting, landing and releasing The Great Barrier Reef’s grander black marlin.