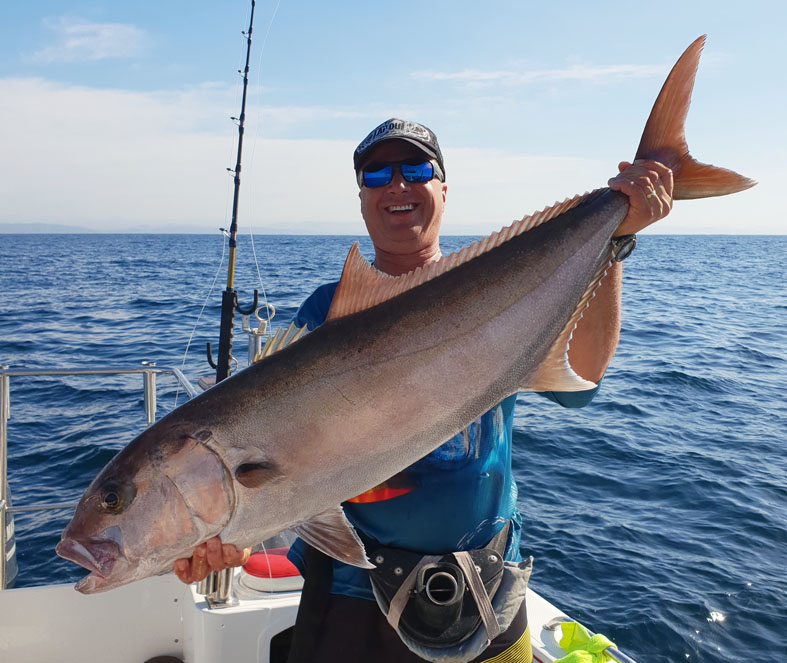 BACK in 2008 my crew and I started targeting amberjack on the KZN South Coast with what we thought was the correct tackle and bait. Yes, we landed some good fish, but we also got a hiding of note because these guys are world class fighters. However we learnt a lot and eventually found the correct set up which I’ll share with you in this article.

MIKE’S HANGOUT
The perfect depth is from 70- to 90 metres and on the edge of a big hole or canyon. The reason for this is that the hole or canyon creates an upwelling which becomes a thriving Mac Donald’s for fish like this. The size of the fish you will find in this depth ranges from 17- to 50kg.

THE FAMILY
We have noticed that the junior and teenage fish shoal together in the summer months of December and January. You’ll find 2- to 8kg specimens on good reef structure with 5- to 10 metre drops and in depths up to 40m. The perfect conditions are slack current with a thermocline at mid-water.
The older guys and girls range between 8- and 16kg and are found in 50- to 60 metre deep water. Once again ideal conditions feature a slack current with a thermocline at mid-water.

BAITING UP
The junior and teenage fish love the whip spoon, the 100-200g Benthos jigs and the bucktail jig. Silver, green, orange and chartreuse are all succesful.
For the older guys you need to move to the heavier 200-300g Benthos jigs and livebait. My favourites are shad, mackerel and torpedo scads; the more slender the bait the better.
When you’re baiting for “Mike” we have three options — yellowfin tuna, frigate tuna and skip jack tuna. The size of the bait is of utmost importance as the amberjack does not have a very big mouth; anything up to 4kg is good.

TACKLE
In the beginning we started jigging with grinders and two-piece rods, but we quickly found out that we were undergunned with the two-piece rods and the middle of the range grinders. We then invested in Shimano Stella 18 000W and one piece Shimano Blue Rose jigging rods. Our success in landing the bigger fish improved somewhat.
We then started live-baiting with the grinder set up which cost us lots and lots of tears, never mind the injuries sustained when we hooked bigger and stronger fish and had no option but to increase our drags. With the grinder being at the bottom of the rod, the constant pressure of 25kg-plus drag and the fish’s pounding tail kicks, the rods were snapping left, right and centre.
The answer to our challenge was to find an over-hand set up that was not too heavy to handle due to the technique we use.
We invested in a Shimano Ocea jigger 4 000 star drag reel which has an 18kg max drag and matched it with a one piece Kingfisher 450g rod. We spooled the Ocea with 120 lb Saltiga multi-colour braid and attached a 1.8mm x 5m long mono leader to the braid by means of a plaited knot.
Our trace for the livebaits was a very simple one to start with. The mono diameter was 1.8mm and it was 1.2m long. On one side we put a 3/0 three-way swivel and on the other a 12/0 Bandit single hook.
The sinker line was attached to the three-way swivel and — very important — the sinker line length must be between 6- and 10m long. The length of your sinker line determines the distance between the reef and where your livebait is swimming, therefore giving you a greater chance of keeping the fish from cutting you off on the sharp rocks.
The tackle and trace mentioned above was very efficient and produced fish of up to 32kg.
Unfortunately the Ocea jiggers did not last too long; the gears stripped and the one-way bearing disintegrated but as least we were not breaking rods.
We still found ourselves locking up the Ocea jigging reel to full drag including the left thumb pressing down onto the spool as hard as we could and the fish still took line off the reel and swam into the reef.
In this situation there’s only one stance you can take — download a song called Bend Ova by Lil Jon, listen to the song and imagine your knees touching your elbows all locked up under full pressure.
We then started doing some homework on another reel. It had to be light and small, but with a very powerful drag system. We found the king of all reels for our application — the Jigging Master PE10. This reel’s drag maxes out at 100 lb, it only weighs 830 grams has a 1:3.6 ratio, a lever drag system and enhanced power T-BAR aluminium handle. We matched the PE10 with a Shimano Beastmaster 20/30 rod which is your perfect combo.
After being repeatedly cut off on the rocks on the 1.8mm mono, we decided to give another trace line a go. We opted for 200- to 300 lb carbon-coated steel wire. The advantage of the carbon coated wire is that it ties a very simple knot and has a very thin diameter — just what you need. (See photos on previous page.)

THE FIGHT
Round one — the bite — is insane to say the least! One moment your rod tip is facing the sky and in zero point zero seconds your rod slams the gunnel, the tip is in the water and you let your knees touch your elbows!
Round two — the first wind of the reel — is the most important, and if you can get a second, third, fourth and so on, all the better. Even with a long sinker line you still need to power the fish to keep it as far away from the rocks as possible.
Round three is a real tug of war. At this stage of the fight the fish will settle into some off the strongest tail kicks you have ever experienced. Every now and then it will try to dart off to the bottom.
The pressure on the tackle and your body is intense and you need to hang on for dear life or all will be lost.
Round four we’ll leave for you to experience for yourself..

THE MAN ON THE WHEEL
A very important factor in this complex process is the skipper. Our experience has showed that the angle of your line to the boat is of utmost importance. Remember if the angle of your line is at 45 degrees to the boat, all the fish has to do is swim straight down and, without any pressure on the line, it will make at least 8m in 80m of water.
The line angle has to be straight up and down so the angle is at zero degrees; this will ensure you keep maximum pressure on the fish so that you can control its actions.
Good luck! Go out there and catch a record fish.