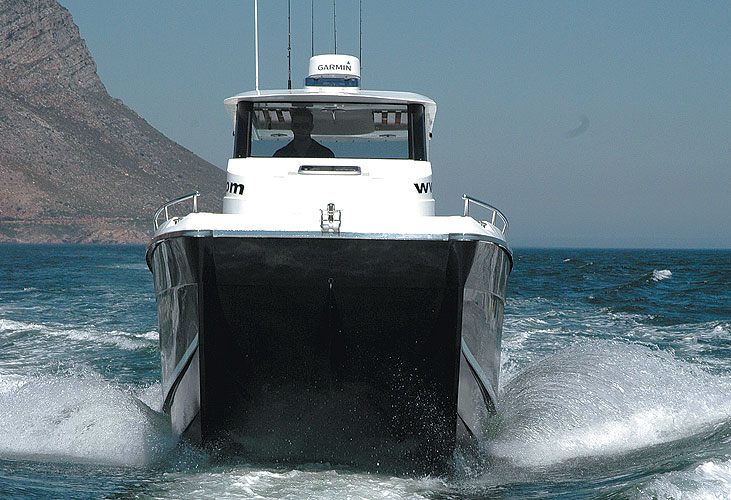 RECENTLY I was again fortunate to make a trip down to Gordon’s Bay to meet up with Ernie Magson of Magson Marine. This time I was there to test the pride of his fleet — the 9m Titan 300 Walkaround. This would also be the my first visit to their fishing grounds some 40nm out at sea. I saw this as the perfect opportunity to test Maximus and assess her capabilities.
For a long time Ernie dreamt of building a big boat and he spent more than two years researching and developing a craft that would suit Cape waters — a boat that would be able to handle these unpredictable waters as well as a big load. Needless to say, once the Titan 300 was launched, Ernie realised that all the hard work and time he’d put into this project had paid off.
The technology that has been used on this craft is mind-blowing. I spent hours talking to Ernie to get to grips with and understand everything that had gone into the design of the Titan. 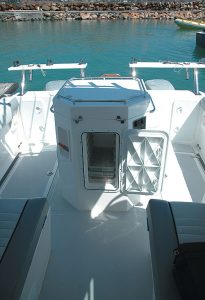 FIRST IMPRESSION
When I first saw her on the mooring my heart skipped a beat and I couldn’t wait to get her out to sea. I wasn’t the only one who couldn’t take my eyes off her — every person that walked past her mooring had a good look at this magnificent boat.
It’s obvious that she has been built for these Cape waters, and judging by the layout, she has been developed specifically for the fisherman. From the first glance I could see it would be a comfortable trip, both because she’s so spacious, and because of the clever way that space has been used.

CONDITIONS
During the photo shoot the sea was perfect — flat, with no wind, and we had to make a plan to get her to perform a little bit for the camera. The Cape can be unpredictable, though, and by the time we took the Titan out for to sea, there was a bigger swell and a light northeasterly wind was blowing. We had an lovely day out at sea, but decided there and then we would come back another day to test her thoroughly. As a result, I went back to fish the Gordons Bay Tuna Classic with Ernie at the end of April.
On the first fishing day the weather played along, but the rest of the week was a blow-out and we could only fish again on the last day, the Saturday. Even then the sea was on its head, so you can just imagine what the conditions were like 25nm off Cape Point. 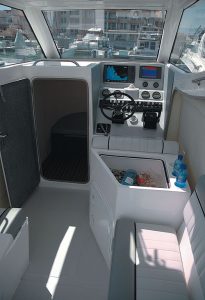 MOTORS AND CONTROLS
Maximus — the test boat — was fitted with two 200hp Yamaha four-stroke motors with binnacle cable controls. I was amazed at the ease with which the two Yamahas pushed this big boat. One might also imagine that it would be difficult to put her into gear with the long cables on her controls, but that was not the case. It was easy and very smooth. On some boats you almost break your hand trying to get the motors into and out of gear, but the setup on the Titan was perfect.

PERFORMANCE
Out the hole she is fast. For a boat that weighs around about 3.3 tons she is quite nippy and she would be able to keep up with most smaller boats, if not give them a hiding. This time we really tested her properly over three days, spending eight hours-plus on her.
In the choppy sea we hardly even felt the chop, and in the bigger swell we pushed her hard to reach the tuna grounds fast, travelling anything between 15 and 28 knots — comfortably. Into the swell we had no pounding and experienced no cavitation when turning, even at speed.
Although many big boats feel like they’re leaning over when they turn because of their size, the Titan just sat tight and turned comfortably. This is a clear indication of the right setup and that the engines had been set correctly.
When we returned on the last day I had my first experience of big swells — 5m and higher — in addition to thick mist which reduced visibility to 20 metres. This is the time when a radar comes in very handy, and we cruised back with the huge swells in the mist at round about 28 knots — comfortably. Not once did the Titan roll or broach with a following sea. This boat outperformed most of the big boats I have been on.
When I put her though her paces I could not fault her anywhere. She is very stable while trolling, even in a big sea. 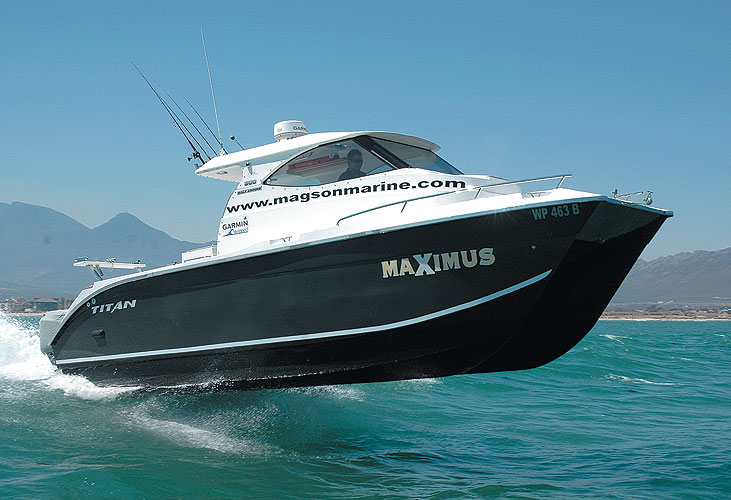 LAYOUT
As I said earlier, the Titan 300 Walkaround has definitely been built for the fisherman, and many extras have been added.
Starting right in the bow, she has a seat for the angler who do a lot of spinning and need somewhere to rest. Underneath the seat there’s a big storage hatch.
The console sits on the right-hand side of the boat with all the electronics flush-mounted. The Titan 300, and Maximus in particular, has been fitted with all the bells and whistles you will need. Two comfortable seats are fitted in the console area, one on each side of the cabin. Access to the two 300 litre fuel tanks is below the console, and there’s extra storage space on top.
The cabin is comfortable and spacious, with enough room to have a snooze if you’re tired. I had a comfortable rest inside while trolling for tuna.
Moving right to the stern, the Titan 300 has a huge livebait well and two huge fish hatches. Ernie has also developed a nice, comfortable work station that has place for your prepared sardines or chum. The work station boasts a tap with a saltwater pump as well as a freshwater pump, a cutting board and a storage space that holds five boxes of 5kg sardines. There’s also space for eight plastic tackle boxes to be stored neatly.
The gunnels are high and nicely padded which makes it comfortable to fish all the way around. Ultimately, everything is in its place and the layout has been done very precisely.

FISHABILITY
The Titan 300 was developed to cater for the fisherman who likes to fish in comfort. Five fishermen could comfortably fish on the Titan and not be in each others way. On one of the days four of us fished for snoek with spoons and were easily able to fish at the same time.
She also has the ability to cater for all facets of fishing — anything from snoek to marlin and everything in between. Her stability and high gunnels ensure that you’ll enjoy fishing comfortably and safely. I can’t emphasise enough how much I enjoyed fishing on this boat. 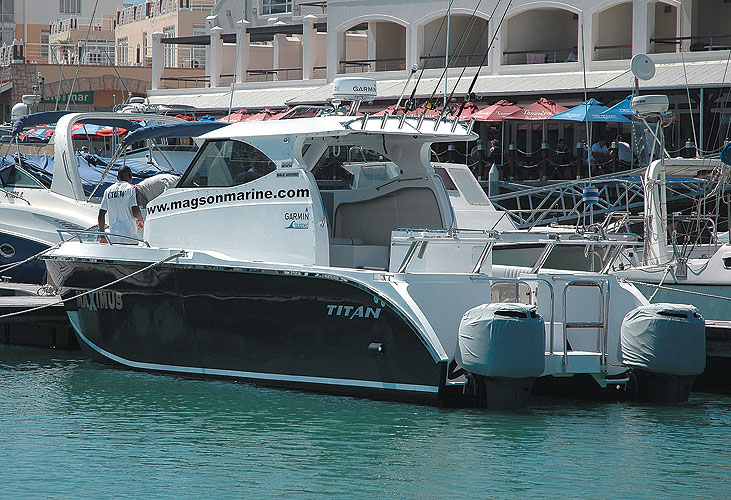 FINISH AND CONCLUSION
The finish on the Titan 300 is superb. Like all the other boats made by Magson Marine, she is top class and the workmanship is of a very high standard. Ernie also says Magson Marine will go the extra mile to keep their customers happy, and they can adjust the Titan 300 to customers’ requirements.
I could not fault the Titan 300 in any way — the experiences I had with her were just perfect. The Titan 300 sells for around R1.4-million, fullhouse, but if you act fast you can buy Maximus, the demo boat for R950 000.

If you’re interested in a big, comfortable boat, I would thoroughly recommend you have a serious look at the Titan 300.