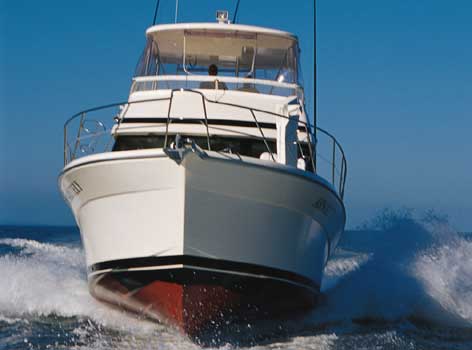 ABSOLUTELY is her name. Whilst a following adjective is not required, I can think of dozens of which would go some way to describe the Riviera 43 … “bloody fabulous” is the first that springs to mind.

Yes, she is awesome. Despite the hype this craft obtained when she landed in Durban and the pre-publicity I have read on the Riviera range of sportsfishing craft, I was still unprepared for my first sight of this boat. As I arrived at the Mossel Bay harbour walk-on marina I drew an involuntary deep breath — a very deep breath, and while waiting on the quayside for her owner, Norman Malyon, I could not help slipping into a dreamworld and mentally visualising what I would do with a craft such as this.

I didn’t want this dream-like state to influence my “objective” review of this craft, and so had to wait a few days for the adrenaline rush to subside before I could commit my thoughts to paper.
Norman Malyon moved from the Reef to Mossel Bay some years ago, bringing with him a great deal of experience and a desire to continue his love for offshore fishing. As an ardent and successful marlin angler he was under no illusions as to the fishing that awaited him off his chosen seaside home, but he still wanted an offshore fishing craft like that he and his wife Annetjie had dreamt about.

The net result, after much research, was a trip to Australia and the Riviera factory where he made the decision — he wanted the Riviera 43 sportsfisher. Having viewed a number of popular brandnamed US craft, he believed that with the US dollar/SA rand and Australian dollar exchange rates he could get more for his rands in Australia. 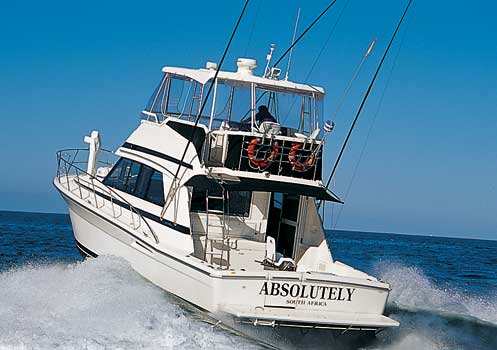 And so a space for Riviera number 301 — Absolutely — was booked in this huge factory, and the long six month wait began for the Malyons.

Now that he has his hands on her, Norman is ecstatic with his craft, and now it was up to me to get the feel of her and to try to gauge her performance, absorb the intricacy of her manufacture and finish, and generally see through her impressive looks to her real “personality” below.

It was late afternoon of a glorious Southern Cape summer’s day. The sun was sinking slowly to rest over the Outeniqua mountains which formed an indigo backdrop to the vast expanse of Mossel Bay. A light north-easterly wind barely rippled the water’s surface as we slipped moorings, eased out of the berth and idled towards the harbour mouth. Walter Robertson and Johan van der Merwe were waiting for us. Their ski-boat, Biesmelk, was to be the photographic boat, but they were so busy fishing for yellowtail that we left them to enjoy themselves while I “played” with Absolutely and waited for the sun to dip a little more towards the western horizon.
Up on the flybridge, after taking over the controls from Norman, I got a powerful sense of satisfaction. To have this 16 ton craft with 900hp power virtually in the palm of one’s hand is awesome. Through an electronic gear/throttle shift system I experienced a smooth, almost unnatural feel as I engaged forward gear and the Riviera 43 moved forward, gaining momentum with the increase in throttle. 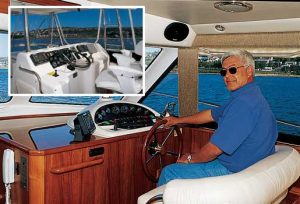 Heading into the wind, I gradually increased her SOG to 20 knots, feeling her restrained torque and power during the displacement period until her hull cleared the water releasing her from this burden to commence planing.

Whilst the speed curve showed an even climb in speed per 500 revs increase, once she was on the plane — which occurred at about 15 knots — she seemed to ride the water more effortlessly. I set course for the open sea in an endeavour to find water rougher than that within the confines of Mossel Bay, hoping that there would at least be a swell, even if the wind was not sufficient to create chop or waves.

However, the little swell that there was had no effect on the Riviera 43 as we headed seaward.
I found that the sense of speed and hull performance is minimised both by the size of the craft and the protection she provides against the elements. Indeed, I was later enthralled and, to a degree, frightened as the awesome craft bore down on us while I was taking photos from the ski-boat Biesmelk. At a certain point the hull rises from the water showing a lot of the anti-fouling on the area below the waterline, and her speed becomes visibly much faster.
To watch her thundering behind and gradually overtaking us only some four to five metres away, was quite an experience. In fact, trying to hold on at 26-odd knots, photograph and watch the Riviera 43 was almost impossible, even in the flat water of the bay.

The Riviera 43 is a sportsfisher through and through, designed for one purpose — catching big marlin. To attain this end, Riviera Marine melded decades of experience building top of the range offshore pleasure craft, with the requirements of some of Australia’s top marlin skippers. The result can only be fully comprehended by physically looking at and feeling this craft at sea.
Needless to say, a good marlin sportsfisher will generally be a superb gamefishing craft. This might sound like “double Dutch”, but fishing off her for yellowtail with an array of 10kg outfits proved my generalisation.

What’s more, seeing once again the style of sportfishers manufactured in Australia has reinforced my belief that Australian fishermen have very similar requirements to us South Africans.

An offshore sportsfisher should be, primarily, a fishing boat that meets its owners requirements 100% in the fishing department with no compromise. Thereafter internal finishes and design are added in order to complement the craft, but not detract from the practical aspects needed by the sportsfishermen who use her.

I will refer to the fishing deck again at a later stage, but to validate the above point, I took particular interest in the construction as well as overall appearance of the internal finishes. I had to consider whether I as an angler, having spent hours at sea fighting a big black or witnessing one of the mates doing the PT, would walk through the doors of the Riviera 43 saloon and mentally be stopped or inhibited by off-putting signs.

Were there any indications that a sweaty angler was not welcome, should not remove his shoes or should not sit on the couch and enjoy a smoke? No, I noticed none of the things that have personally confronted me on many of the sportsfishers I have been on in the big country across the Atlantic or from Rivera’s factory across the Pacific.

Don’t get me wrong, the Riviera 43 is very plush inside, but she is finished at a standard that is practical, durable and, above all, very solid in construction. The internal woodwork, for example, is perfectly finished, but is robust and solid. The shower and toilet are big enough for even the largest South African angler to do what he has to do in comfort. The queensize bed is big enough for a fully stretched out angler to relax or sleep on, but I can also visualise storing four or five 130 lb marlin rigs on its covers — provided, that is, the owner’s wife isn’t aboard when you do it.
Yes, I believe sportsfishermen were thought of, consulted and fully accommodated when this craft was designed. 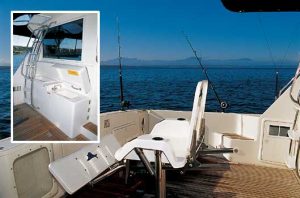 And then there is the fishing deck.
As I said, this is a craft designed by marlin fishermen for marlin fishermen, with no short cuts or half measures or compromises. The angler has a robust, well-sited fighting chair more than capable of withstanding 60 lb strike drag on a 130 lb outfit with a 1000 lb black marlin on the end of his line.

“Deckies”, or crew as we call them — the most important people on the deck during a day at sea — have everything they could wish for and plenty of space to work in when the action gets hot. A substantial, well designed gunnel is set at a good working height, there is a strip teak deck, a livebait well, a bait station, a freezer, a tackle cupboard and washdown hoses — one even has warm water. Yes, a man could really get used to working that deck.

When it came down to fishing —even during light tackle fishing — I found the rod holder well positioned for trolling a lot of lines. The craft even has a double row of “gun racks” on the flybridge aft to hold a full assortment of outfits. The one query I had was with the outriggers which I felt were inadequate for pulling plastic, but would suffice when using dead or livebaits.
Absolutely is powered by twin 450hp Cummins turbo diesels swinging four bladed 23×27 props which, at slow troll and fast troll speeds up to 9 knots, throws a wide, flat wake. Add to that the stability and comfort she offers and you have one hell of a fishing machine.

During the time I had her at sea I tried her under many simulated conditions including testing her ability to manoeuvre while backing up on a fish. With the electronic gear-throttle controls, life is made very easy and she changes direction quickly, moving her large transom with remarkable speed. She also has a bow thruster which can be used at sea, but which is actually more handy when it comes to mooring while the wind is blowing. A set of hydraulic trim tabs position gauges would help as I am not happy reversing under power not knowing whether the trim tabs are up or down. I prefer them up to avoid any chance of them digging in and being ripped off. 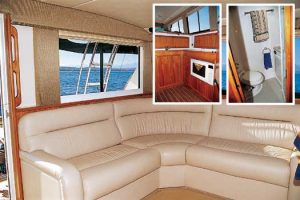 There is so much more this craft has to offer, so many features, so many gadgets, so many extras, that even the standard specifications sheet runs to more pages than this review. Indeed, I won’t pretend to do justice to the thought and workmanship that has gone into this craft.
There was, however, one particular feature— or perhaps I should say two — that I really liked and that was that there is a helm situated in the main saloon as well as on the flybridge. The downstairs helm is great in bad weather, and even better for a long run home so that the skipper can enjoy the company of his mates while relaxing in comfort. As most of our boats don’t have hired skippers, I see this as a big advantage.

In the South African boating world, Arnie Levy was a doyen and it is his son, Derek, who now imports these magnificent craft. He had a saying that speaks volumes: “One word — perfect.”