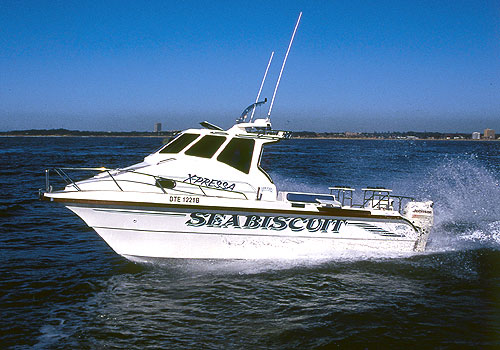 LEE Cat’s Xpressa 800 is a mean machine. I was surprised, though, because when I first saw her parked on her trailer in Port Elizabeth harbour, she looked completely different to the 8m Lee Cat Sportfisher that I tested four years ago in wild seas off East London.

While flying into PE, our plane banked over Algoa Bay, giving us a bird’s eye view of the ocean and bay that still had the remnants of the previous day’s big swell and strong wind. Although the sea was unsettled, it was infinitely better than the sea I had to contend with when I last reviewed a Lee Cat.

Leon and Carl Lee were extremely hyped up about their new craft and were eager for me to inspect her even before she was put into the water.

The Xpressa 800 is a stylish, almost racy looking craft that has been styled, constructed and finished to a standard that will rank with the other top class outboard-powered, offshore sportfishing craft built in South Africa. Indeed, that was precisely the Lee brothers’ — Leon, Carl and Joe’s — ambition when they set out to design and manufacture this, the latest model to emanate from their factory at Port Alfred.

Have they achieved that ambition? Read the following review of the Xpressa 800 and you will no doubt come to the same conclusion I did when I was churning up the ocean in Algoa Bay: “By gad, I believe they’ve done it.”

While the Lee brothers were getting their craft into the water, I headed to sea on the most unusual craft I have ever used as a photography boat — a converted chokka trawler, Bogenfels, owned by Gert Schoeman. He intends using it for fishing charters off Moçambique.

At the steady 8 knots we were cruising, it didn’t take the Xpressa long to catch up with us as she sped around the western pier and across the bay towards us. She was a beautiful sight in the early morning light.

Carl had already explained in detail the changes they’ve made to the hull and its straking, as compared to their 8m Sportfisher. He believes these modifications will improve both the ride and the craft’s attack on the sea whilst planing. Although he felt top-end speed had been marginally sacrificed, it was a minimal loss when compared to the benefits achieved in the improvement of the craft’s overall ride at all speeds.

When the Lee brothers started putting their new craft through her paces for the camera, it came as no surprise to me that she not only has the basic looks of her lineage, but also had a very similar ride as she planed across the surface of Algoa Bay. 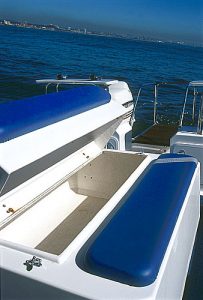 I also believe that because of her unique strake and hull design, she reacts only marginally to motor trim, rather using that design to produce her special ride. Her ride is soft, but there is still sufficient inverted straking, just aft of the entry area, to cleave the water and send spray wide and aft.

Crossing from Bogenfels to the Xpressa 800 was not that easy, but once I’d accomplished the task I was very keen to experience this craft firsthand. I said earlier that the overall appearance of the craft was “racy”. Studying her later in the photographs, this impression once again dominated. Now it was time to see if she felt as good as she looked …

The long swell and light wind chop created the ideal sea to commence the run I intended taking, passing the famous Bell Buoy and heading on a bearing that would, if maintained, take me to the tuna hunting grounds a further 30 miles out to sea.

Leon and Carl had decided on twin 140hp Johnson outboard motors, swinging 19” pitch stainless-steel props. This combination provided sufficient out-the-hole acceleration and excellent thrust throughout the power range, delivering excellent top-end speed for a craft this overall size. Furthermore, when pushing on its own, each motor was able to get the craft onto the plane. The port motor produced 15 knots at maximum revs of 4 500rpm, and the starboard 16 knots at 5 000rpm.

Once the craft was on the plane, I backed off the throttle just enough so that the craft continued planing without the motor sounding as if it was straining excessively. We could have run a substantial distance like this without damaging the motor, and still covering a lot of water if the need arose.

With Thunderbolt Reef far off to starboard, we were getting further and further out to sea, and further from the protected confines of Algoa Bay. From 12 knots at 3 000rpm, I pushed the throttles up to 4 000 revs to give me a very comfortable ride of 20 knots into the head sea — a speed I could have maintained all the way out to the fishing grounds.

Not only was the ride smooth, but the overall motor- and hull-over-sea noise was at a level where Leon, Carl and I could still converse easily and didn’t have to hang on tightly. We could just relax and enjoy the ride. At 5 000rpm we reached 30 knots, but I felt that while practical, this speed was far too taxing for such a long run.

On a reciprocal course, running with the sea, I could have maintained a slightly higher average speed, but I chose the 20 knot comfort zone and retained the economical 3 800-4 200rpm to return.

Out in the deep, however, I spent a lot of time putting her through a range of trials at much lower speeds, in order to gauge her performance during different types of trolling situations.

Seeing that she was designed largely for tuna fishing, it was important to test her while trolling in the 5-6 knot speed range. At this speed, she produced a broad, flat wake that would work well for pulling swimming lures not very far behind the motors. At faster speeds of around 7-8 knots, with the motors running at 2 300rpm, she maintained the steady, even pull that is needed when trolling big konas for billfish. Even directly into a head sea, she trolled well and provided a whitewater wake that was suited to pulling this type of lure.

Remembering the gamefishermen of the KZN coast, I tested her a lot with one motor in idle, as if slow trolling for ’cuda. Right down to 700rpm, she was showing an SOG of a little over 1,5 knots and her steering was positive, although I must admit there was not enough wind to materially affect her steerage. 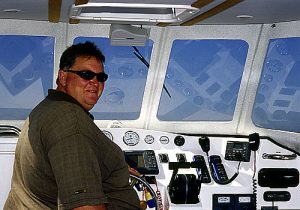 The Xpressa 800 also responded well in reverse while mooring her. Holding the steering with the motors straight, I was able to accomplish tight manoeuvres in the harbour by using alternate motors in forward or reverse. Out at sea, as if following a big marlin or tuna, I found I needed a lot of power, both forward and reverse, to achieve the stern movement I required.

Pulling her around into a sharp turn and then out of the turn again, as one would do during a surf launch, she manoeuvred fairly well for a craft of this size. Bringing about eight metres of boat at speed — especially a cat with its drag of two sponsons — is never going to be the easiest task. However, by using a lot of power on the outside motor and dropping power on the inner motor, I achieved the necessary performance that would have allowed me to launch this craft through the surf at most of the major launch sites where this sort of manoeuvre is required.

What really impressed me, though, was her overall fishability. Designed as she is, primarily for hunting big tuna, her fishdeck layout has resulted from the Lee brothers’ life-long exposure to fishing for big fish from predominantly big boats. Many extras have been incorporated into the deck area, but I’ll only discuss the major ones in this review. Very importantly, the transom area is clean and clear of obstacles, allowing full access to the trolling boards which is crucial during multiple strikes. Moving around the deck while harnessed to a big tuna, and in fact right around the craft using its walkaround area, would be very practical.

The moveable, above-deck fish hatch which can be loaded through the hinged top is already large, but Carl told me that an even bigger hatch is available for commercial operations. This hatch can be swung through 90° to provide both seating and fish storage facilities for either gamefishing or bottomfishing. 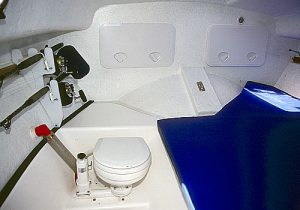 Talking of bottomfishing, a unique anchor stowage locker in the port forward section of the fish deck, together with a workable rope-pulling bracket mounted above it on the gunnel, allows the anchor to be controlled from the fish deck, rather than having the anchor man scramble up to the bow area (see photographs).

The aspect of this craft that really caught my attention from the moment I first saw the Xpressa 800 was its “dodger” cabin. The cabin looked really good, and it worked even better. This craft is undeniably a fishing boat, so the dodger cabin has been positioned in order to maximise the fish deck area, while still providing all the protection and comfort a crew of four or five need during a day at sea.

Within the confines of this cabin is a well laid-out helm station that is centrally situated, offering a good view of all the instrumentation. Whilst I am not a great lover of centre steering — no doubt due to a lifetime of right-hand-drive steering setups on boats and cars — I did enjoy the one on the Xpressa. The all-round view through the big windows gave me good visibility, even when I had a crew member on each side of me. This is a very good indication of the spaciousness, especially since neither Carl nor I are small chaps, width-wise.

Two other noteworthy features are also incorporated into the helm station. The first is an interesting vertical locker with a hanging rod to hold all the life jackets. It’s very neat and easily accessible. The second feature is a pair of small lockers which each hold a fire extinguisher for quick access by the skipper. Just a few months ago Carl experienced a devastating fire aboard a craft at sea, and is now very aware of the importance of these vital items of safety equipment aboard a boat.

Leon and Carl had towed the Xpressa 800 from Port Alfred to Port Elizabeth that morning. While I was cruising at 30 000ft, they were cruising at 100kph, towing their craft with their 3-litre double cab. Apparently she towed beautifully. Having recently towed her to Cape Town and back they should know.

The trailer is sturdy — it has double axles — and is built specifically for slip launching. It also has a protruding aft platform, and this, together with the centre guiding rails, makes reloading her very simple. Using the extended aft platform to climb aboard once she is loaded and pulled out of the water makes this normally difficult task extremely easy. 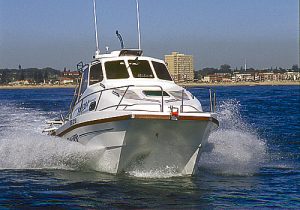 As I mentioned in the write-up on the 8m Sportfisher, it’s only in recent years that Lee Cat Boats have started targeting the recreational sportfishing market, having hitherto concentrated on the big commercial fishing boat users. This change in direction has resulted in a total rethink on the finishes and styling of their boats.

In order to compete, they had to emulate the quality of finishes and hardware on other similar craft available in South Africa. The Lees have therefore gone out of their way to ensure that the Xpressa 800 is a craft that not only has the looks, but also the quality of finishes that will make any future buyer a very proud owner indeed.

As I said, the Xpressa 800 is a mean fishing machine, and I have no doubt that this craft, which is also extremely well priced, will quickly become popular among the boating fraternity both in South Africa as well as neighbouring countries.