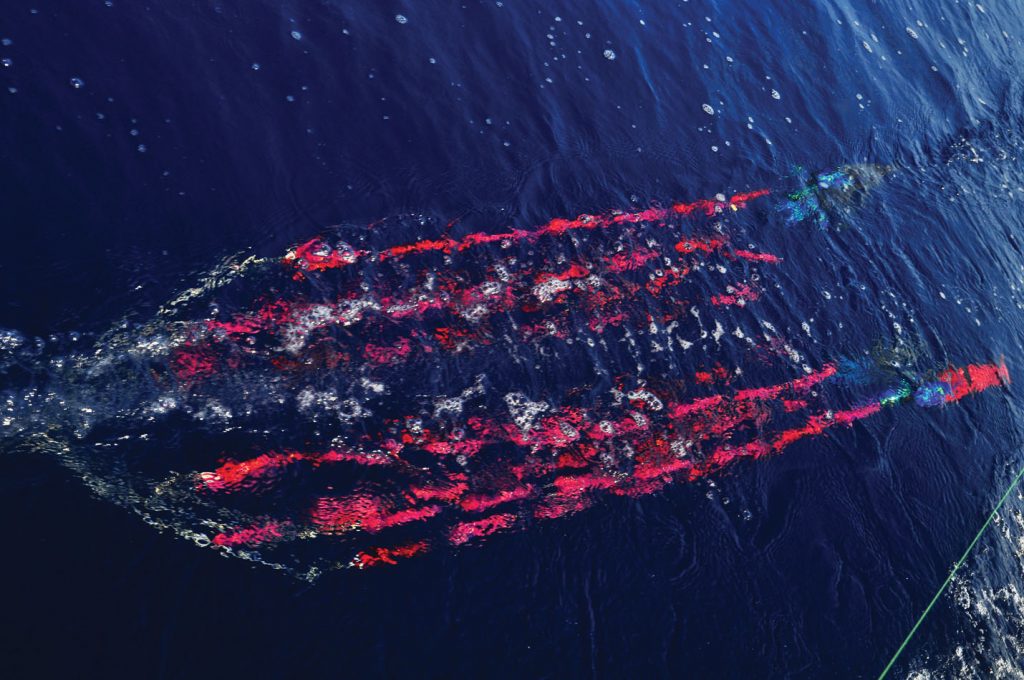 “DREDGE fishing for pelagic fish started in the ’80s when a few captains in South Florida got the idea of emulating a bait ball by stringing up a bunch off mullet on a homemade dredge bar. The technique was so effective that it’s said that Captain Chip Schaffer would rather cut off his dredge than give away his secret to competing boats. However, as with most fishing secrets, the word got out anyway and soon after boats all up and down the sailfish circuit had made the switch to trolling mullet dredges for sailfish. Today dredge fishing is almost a staple for all fishermen targeting billfish on the sailfish circuit.”
That’s the answer I got from Squidnation founder, Bill Pino, when I met him at a tournament in North Carolina and asked how this aspect of our sport got started.
I was introduced to dredges for the first time while fishing for white marlin and sailfish off North Carolina and the Dominican Republic. At first I thought” “What are these guys doing? They’re going to scare my fish away!” but I soon realised the fish tended to come up behind the dredges every time.
I immediately started investigating this set-up and whether it would work in South African waters. I subsequently got into contact with Bill Pino, the modern day father of artificial squid dredges and the owner of Squidnation. The growing popularity of artificial dredges has made it a regular option for most lure fishermen targeting billfish.
The idea is simple — troll a bait ball behind your boat and marlin and sailfish will appear to eat the bait ball. Pull it away from them and they need to eat something else; the fish will switch from the ball that mysteriously disappeared to your trolled baits or lures.
Most dredges are single, double or triple tier stainless steel dredge bars which are slow trolled between 4- and 6.5 knots (7.5-12km/h) about 15 to 21m behind the boat. Various weight options from 1kg to 2.7kg rigged on a cable (see picture 1) in front of the dredge get them far enough below the surface that they don’t pop out of the water but still shallow enough that they can be seen by the anglers (see pictures 2 and 3). If you can’t see the dredge you can’t see the fish behind it and the fish can sit behind the dredge for a long time until it loses interest.
There are many reasons for this progression to artificial dredges — bait availability, speed of trolling, cost, preparation time and ultimately effectiveness. We just don’t have enough suitable bait in South Africa so the artificial dredges are the only option for us. Good halfbeaks can be scarce and anglers prefer to use them for hooked baits.
The use of artificial dredges also allows you to troll faster. Squid dredges can be pulled as fast as 9 knots (16km/h) when hunting for bait balls and billfish. Squid dredges, mudflap dredges and shad dredges give the angler plenty of choices on shape, colour and sizing.
With the advancements of dredge cams most of the assumptions we’ve been making can now be proved. Numerous videos show billfish rising up to an artificial dredge, slapping at it once and then going straight to a bait.
So dredges raise billfish, but do they work in South Africa. Yes, definitely, as can be seen in the results from the past few tournaments where the top boats were all pulling dredges. In the last OET the top two boats were both pulling dredges — Hotline pulling a Pulsator dredge and Jean Mari pulling a Squidnation dredge — and they raised most of the billfish behind the dredges.
I asked Jean Mari’s skipper Japie Kleinhans and crew member Nick Nel whether the dredges worked and Japie replied, “For sure! We raised billfish every day except the f*?#! day my crew left the dredge on the side!”
With all that said and done, figuring out how you pull a dredge from a ski-boat was the next challenge.
“We don’t have that type of boat,” is usually the first answer you get when suggesting that skippers try dredges. Wrong. You can easily rig a complete electric dredge reel from a ski-boat (see picture4 and illustration 1). If you don’t want to invest in an electric reel use an old 80 lb setup that would work just as well (see illustration 2).
In both the electric reel and 80 lb reel setups the dredge is run from the outrigger with a snatch pulley system. The reason for this is the speed at which you can retrieve the dredge and the reduced strain that is put on the reel when you retrieve the dredge.
If you feel your riggers are not strong enough for this setup you can use a dredge boom (see picture 5 and illustration 3). This is an independent boom that can be placed in your standard 30 degree rod holder in the gunnel of the boat. This will take the dredge out to the desired position without straining your riggers. The setup uses the same snatch pulley system as shown before.
Set up from the pulley to the dredge is the same for all the above mentioned systems. Spool the reel with 300- to 500 lb mono as the dredges create a large drag through the water. Place a screw swivel or snap-on swivel of at least 500 lb between the mono and the dredge weight. Then make up a cable around 500mm long, from 800 lb stainless cable, with at least a 500 lb swivel on either end to link between the dredge and the dredge weight (see picture 1).
Always inspect the swivel and the cable before you put the dredge in the water as 90% of dredges are lost between the weight and the dredge due to swivel failure.
You should now have a successful dredge fishing setup.