TWO or three decades ago the hottest topic in deep sea angling was which tackle shop had stock of top-quality sardines. This was followed by a mad dash to said establishment to join the fray as anglers jockeyed to get their hands on the precious merchandise. I can clearly remember opening up boxes and inspecting the eyes, stomach and skin colour before settling on those that passed my quality control test. If I was feeling extravagant a few mackerel were added to the basket before checkout. And should there be a sign saying “Fresh Bonnies” it was like a COVID-19 panic buying spree!
Fast forward to our current day and there is less hype about fresh dead bait, or certainly nowhere near that of yesteryear. The focus has definitely shifted from dead bait to that with a pulse.
Livebaiting for gamefish and bottomfish has become more and more of a rave among offshore anglers, even those old salts who used to religiously fish with deadbait.
This might be due to the increasing accessibility of this bait source or due to the improved results that they produce. Either way, I can quite happily spend two hours in the morning looking for livebait — ostensibly sacrificing valuable fishing time — just so that I arrive at my marks with a well full of livies. My plan regularly produces pulls continuously throughout the day as compared to the other boats that opted to fish with deadbait during the early morning bite which only lasted a short time before the fish became fussy and pulled their noses up at anything other than a livie.
There have been many “how to” and “back to basics” articles on catching and storing livebait, so for the purposes of this article I will not be focusing on that aspect. Instead I will start from where you take the bait out the livewell and want to rig it up to target a gamefish or bottomfish.
There are countless methods to rig up a livebait and just as many factors that influence your choice on which method to use. These include things such as target species, fishing method, depth of water, strength of tackle, how you want the bait to swim — the list goes on.
The first decision you will make about how you are going to rig a bait depends on the species you are targeting. The main factor will be whether they have sharp teeth or not. This will dictate if wire is needed or not. If you are targeting ’cuda and wahoo — fish that feed by slicing baitfish and need to be hooked up on the strike, with no feeding time — I would suggest armour plating the livie with wire.
There are three types of wire rigs that I use — all are for gamefishing as wire is not needed when bottomfishing. The first two traces are two single hook IGFA and SADSAA approved rigs and can be used in all gamefish tournaments.
When speaking to anglers local to the KZN South Coast, there is a definite preference towards a 2/0 or 3/0 single through the nose and a 4/0 or 5/0 near the tail. Hook sizes will vary depending on the size of the livie. The lead wire between the swivel and nose hook is #4 and between the hooks is #6. A small green glow bead is added to complete the rig.

The other rig option is used for larger baits like shad, big mackerel and bonnies. The larger the bait, the more difficult it is to pinpoint where the predator is going to bite. With only one hook in the body of the bait (as shown in diagram 1), your chances of hooking up are not very good. In this situation, I use a nose clip made from #12 wire which essentially acts as a third hook that holds the nose of the bait, allowing you to put two hooks into the body while still remaining IGFA legal.
For the social angler who just wants to go out to sea and catch a few fish without worrying about the technicalities of IGFA rules, the good old Natal-style ’cuda trace works very well. It can be used with dead- and livebait and catches anything that bites.
Basically, it’s a section of #5 wire attached to a 2/0 nose hook. From there, two sections of #7 wire are used to add No. 1 trebles to finish off the rig. I like to incorporate a power swivel on the nose hook to allow the treble hook wires more flexibility. Even though I get looks of horror when I say it, I like to use a duster on this trace because it hides the hardware on the nose of the bait.
The nose hook can be passed horizontally through the nose or vertically through the upper jaw. The one problem with trebles in a livebait is that they are easily shaken loose. To prevent this from happening, be sure to push the hook point through the skin and let it exit again. This gives the barb two chances of hooking before falling out.
On the other side of the spectrum would be rigs for targeting species without sharp slicing teeth. These include bottomfish and many other gamefish and/or billfish species. Sure, these fish are caught on wire all the time, but if you wanted to target them specifically, wire would not be the way to go. For these species nylon or fluorocarbon should be used as these fish need to be given a chance to swallow the bait whole. This softer material prevents the predator from feeling it when the bait is being swallowed. If wire were used, the fish would feel it and spit out the bait. Wire can also be kinked off very easily, so giving the fish a lot of slack line might not be a great idea.
Nylon and fluorocarbon allow for countless different bait rigging techniques, so I will just highlight a few that I use on a regular basis.
The simplest and probably most popular rigging method is to just pass an offset single hook sideways through the nose of the bait. This is mainly used when slow trolling for tuna and dorado. This rig can be used with a strong current or if you are trolling a bit faster with bait like mackerel.
As with most nylon/fluorocarbon rigs, the drag on the reel needs to be set very lightly so that fish can be fed before hooking up. The one problem that I have encountered with the hookup is that the hook does sometimes turn back into the head of the bait, regardless which direction the point is facing. To remedy this, I pass a soft glow bead over the point of the hook onto the shank. This acts as a stopper and keeps the hook in position during hookup.
A slight variation to the above bait rig is to hook the livie through the back just behind the head. This changes the pulling point on the bait and causes it to angle down and swim deeper, just like a lipped trolling lure. It works very well when you’re sitting on anchor and there is a bit of a current or when you’re slow trolling. I like to rig one livie through the nose and another through the back as I cover more of the water column that way. 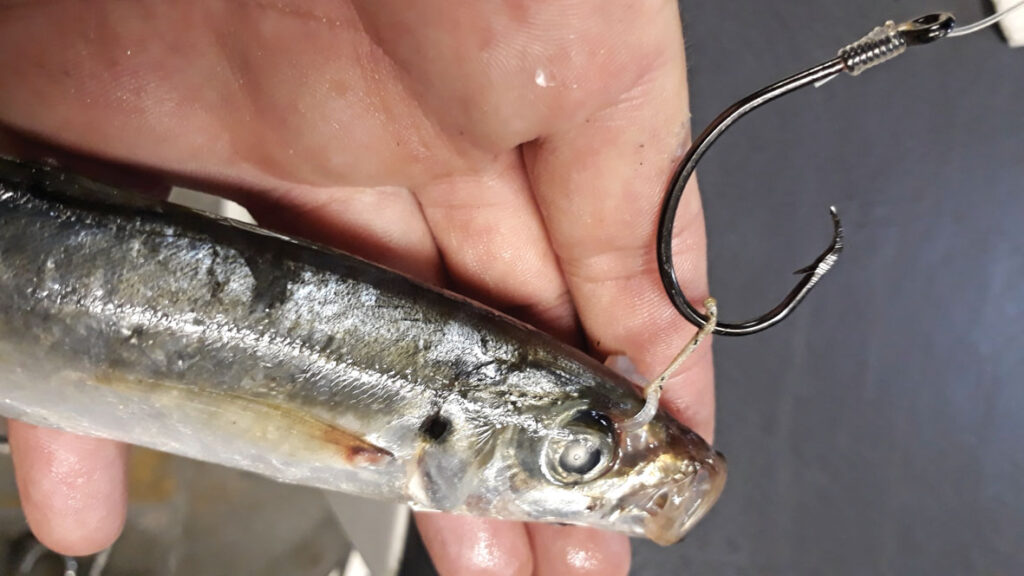 When targeting really aggressive species or you need to cast a bait a long way or you are using large baits, you need to really secure the hook to the bait so that it is not ripped off. Without a doubt, the best way to do this is with a bridle rig. A small zip/cable tie works brilliantly for this. The hook has a loop attached to it through which the cable tie is passed. The cable tie is then pushed through the channel above the eye socket of the bait and zipped tight. This does not damage the livie and keeps the hook away from the bait during hookup. This is a great rig for when you’re using circle hooks especially when casting livies into tuna shoals, livebaiting for billfish or dropping big baits for amberjack.
Using nylon leader makes a bait look exceptionally natural in the water. This makes it a great trick to entice wire-shy species to bite, but this doesn’t mean that the toothy critters won’t eat the bait. On many occasions I have checked the bait and found nothing but a sliced leader. And trust me when I say there are very few things more nervewracking than seeing your “tuna” suddenly turn into a big ’cuda or wahoo and you realise that it is on straight fluoro!
Livebait is by far my favourite bait for all gamefish, billfish and bottomfish, but there is the odd occasion where the old trusted “vrot sardine” will out produce any livie, so it sometimes pays to have a box on the boat for Justin Case.