By Rob Naysmith, Down South Marine

I REMEMBER reading many decades ago, an article adorned with pictures and diagrams, mentioning chines, gunnels, strakes, dead-rise, transom angles, and the likes, and thinking to myself: “It’s fine knowing that these are parts of a boat, but technical jargon is for land skippers, not fishermen. If boat builders know to put these things on boats then we’re all fine.”
During my lifetime I’ve been fortunate enough to have skippered many different makes of boats, along different parts of our coast, through the surf, in the massive Atlantic storm swells, in the most idyllic conditions and everything in between. Some boats I’ve loved and on some I’ve wished I’d taken along spare underpants.
The one conclusion I’ve reached through all of that as a skipper is that the writer of the article was right — I did need to understand that technical jargon. Understanding what makes a boat ride and behave like it does goes a long way to helping determine the best boat for your application and how you can take full advantage of its design.
So, to follow on while adding the many new developments I’ve witnessed since that article, I’ll try to explain the fundamentals of what the various boat parts do and how they influence a boat’s performance, what to look for and what to avoid. Now bear in mind that I’m no naval architect or boat design expert, nor am I a highly qualified engineer; I can only speak from experience and from witnessing first-hand the effects of the sea on the different aspects of hull design.
This may take a while, so get comfortable while we talk boats ….

HULL TYPES
The most common disagreement you’ll hear amongst boaters is over which is the better hull type — a mono or a cat? Then comes the stability issue — which is more stable at sea? Which has the better ride? Which is the easiest to handle? These are all basic but essential considerations. As more of a mediator, I am not going to stick my neck out and say which is better; I own both kinds, so it’s my prerogative to sit on the fence
Let’s take a look at the history behind the two major recreational boat designs along our coast. Mono hulls were around long before cats appeared on our shores — not necessarily because they were better, but because they were tried, tested and best understood. When cats first appeared there was huge scepticism from traditional boaters, but eventually their advantages came to the fore, primarily along the east coast.
In essence, the “V” of a boat’s hull determines its ride. The sharper the V, the better it handles rough conditions simply because it slices through the water more easily. However, the downside is that they tend to lean to one side while running in calmer conditions. Conversely, the flatter the hull of the boat, the more economical and higher on the water it will ride, adding speed and manoeuvrability. The downside of flat hulls is that they give a very hard, uncomfortable ride on anything but calm water. Our monohull ski-boats are, for the most part, somewhere in between.
Then comes the difference between a displacement hull and a planing hull. Our ski-boats are termed “planing” hulls because they ride on top of the water, making use of engine power, speed and manoeuvrability, at the sacrifice of stability. A displacement hull — like that of an ocean liner, trawler, pole boat or tanker, rides in the water with a low centre of gravity giving it much more stability at the sacrifice of speed and agility.
Monohull boats are designed to use their bows to cut through the swells giving a softer, more predictable ride into a head-on sea or wind. In a following sea many have a tendency to “bow-steer”; this is where the bow leans to one side as the weight distribution moves forward, like down the face of a swell, and the boat uncontrollably veers off to the side. This is also known as broaching.
Monohulls naturally roll at rest, but it is a steady, predictable motion and usually easy to retain one’s balance. The distribution of weight while travelling is important, and because of the angled flat surfaces of the bottom of the hull and rotation of the propellers, tend to lean to one side once on the plane. A good skipper can easily overcome most instances of this by using the engines if there are two, and if not, trim planers do a wonderful job.
Catamarans, affectionately referred to as cats, are planing hulls with all the associated attributes. They make use of lift, be it air or water funnelled through the tunnel, to ride on two thin hulls, thus minimising drag. Minimised drag (technically reducing the hull’s “wetted area”), in theory, equates to less effort, thus requires less power and uses less fuel.
Cats do not like head-on swells as the water is compressed into the tunnel, making the ride hard, erratic and uncomfortable. A good skipper can overcome this by simply tacking to the destination, taking the swell at an angle which allows the hulls to cut the swell one at a time.
Cats have less of a tendency to broach as the two parallel hulls are less likely to lean when riding the face of a swell. I say “less of a tendency” because I’ve skippered a few cats that broach even while running on a flat sea, but this is usually a result of bad boat set-up or design. Are cats more stable? Yes, in the greater scheme of things they are. However, while at drift they ride the swells one hull at a time, which makes for a quick double roll. This can be unpredictable and makes it less easy to retain one’s balance.
My experience is that we all need two boats if we are free to roam. If golfers must have a whole bunch of sticks then why can’t we have a couple of boats? The sea conditions west of Cape Agulhas are, for the most part, very different to our east coast conditions. Surf launched boats are often styled quite different to ramp launched boats. Sometimes a big boat is preferable while at other times smaller is more practical. Do you see where I’m going with this? There is a perfect boat for every situation but not always a perfect situation for your boat.
So, let’s step out beyond the type of hull and take a look at what makes a boat ride like it does. Here we will delve into the different features on a boat and the how they affect performance. We’ll look at, amongst others:
• Chines and strakes;
• Dead rise and transom angles;
• Gunnels and deck heights;
• Bulkheads and stringers;
• Weight distribution;
• Steps, outmounts and trips. 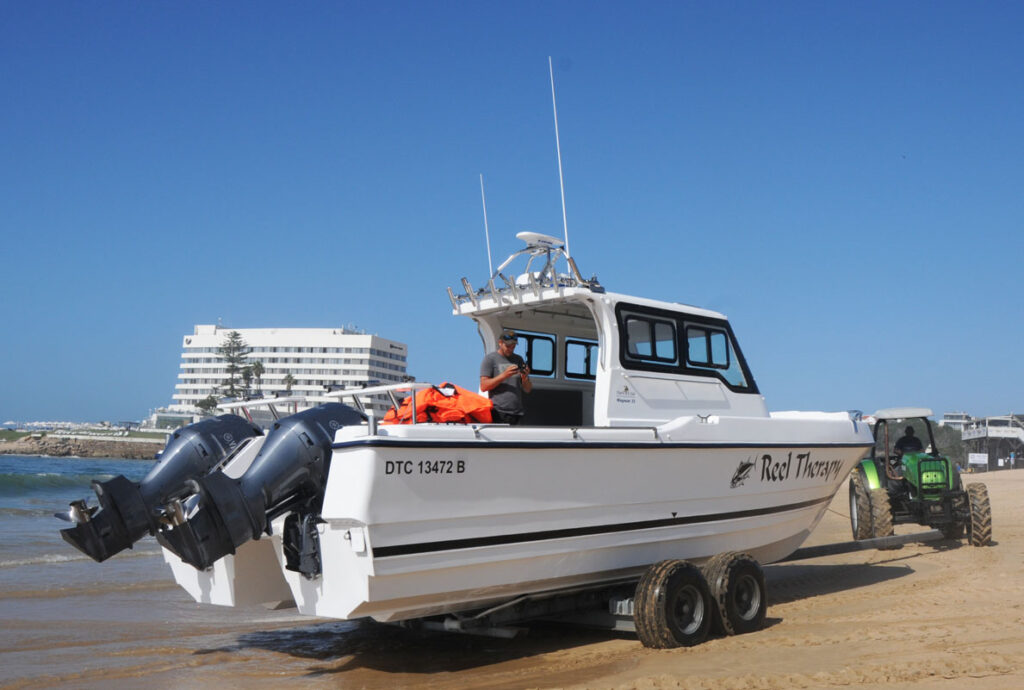 CHINES
A chine is where the angle of the hull changes to form the side. A chine can be termed a hard chine or a soft chine; the sharper the angle, the harder the chine, while a soft chine has a more gentle transition. In theory, a boat with a hard chine should, because of water resistance, roll less but be more jerky, while a soft chine will make the boat roll more gently but also land more severely.
One of the fundamental requirements of ski-boat design is to get the hull to rise out of the water as quickly as possible to reduce drag. This in turn gives better fuel economy and requires less power once on the plane, reducing engine wear. Our boat designers have used the chines on the hulls to deliver just that. As mentioned earlier, flat surfaces create more lift, so by flattening out the chines before they become sides, they create that flat area for lift. However there’s a balance as to how wide the flat piece should be because a very wide chine will lift quickly but will in turn harden the ride.
Chines also serve to deflect the water, so the angle plays a big part in determining whether the boat will be dry or wet. Water comes off a flat area in a straight line, so a non-shaped chine will send the water up into the air at the dead-rise angle of the hull. (We’ll come back to explain “dead-rise” a bit later.) Therefore, a flattened chine will send the water off at a low trajectory while adding lift to the hull and that’s a really nice feature.
As ski-boat designers became more innovative, they pinched ideas from great boats around the world, and one of these features was the “reverse” chine. These look like a cup or inverted “V” under the boat, before the hull goes up the side. These will run at varying lengths along the hull, depending what the designer wanted to achieve. A reverse chine allows for water pressure to build up quickly, thus creating excellent lift with the added bonus of deflecting the spray downward. But again the ride becomes harder.
You may well ask, if reverse chines give so many more advantages, why not run them the entire length of the boat? Some boat builders do run them from bow to stern to get a certain type of performance. Understandably the area where one would most like lift and water deflection, is at the bow and mid-ships. If your boat has a heavy load at the stern, such as engines, fuel, batteries, etc., you’ll want to lift that as well, and in this case reverse chines run right through.
But in designing chines one needs to look very carefully at the application of the boat. In a sharp turn the inside chine will tend to dig into the water as the boat leans, causing the hull to become a flat surface, pushing water and slowing the boat. This also causes an element of instability which, if not controlled, could cause the boat to capsize. By flattening the chine in the rear of the boat — or in the case of a cat hull putting a 45 degree angle (non-trip chine) on the face of the chine — the stern is allowed to slide out, minimising the risk of capsizing and making the turn sharper.
But we’re not out of the woods yet … One thing you do not want your boat to do is unnecessarily push your bow down. So, to overcome this phenomenon the upward water pressure needs to escape before the back, which it will do if the chines are flat. Reverse chines in the aft third of the hull will lift the stern and force the bow down. It’s fine if that’s what you need, but scary if you don’t. Reverse chines in the bow help minimise it digging into the sea when running down a swell and deflect spray out to the sides.
Now is the time to take a closer look at your own boat and maybe understand a little better why it performs the way it does.
In the July issue of SKI-BOAT I’ll be back with more of a technical explanation of what makes one boat different from the next, and give some tips on how you can change its performance. I’ll also show you how we at Down South Marine have taken a renowned boat design and updated it for the modern boater. The new design is currently in test phase and is due for release later in the year, so watch this space.

TAGGING TIGERS IN THE KAVANGO