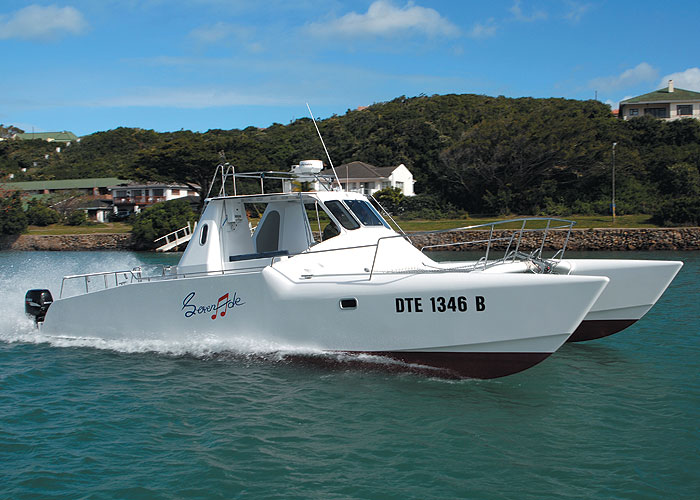 EARLY in 2001 (see SKI-BOAT March/April 2001) was when I was first exposed to Supercat’s original Supercat 38 Sport. I first took this rather large craft through the notorious Kowie River mouth, head-on into the breakers that emerge around the end of the western breakwater. There’s no possibility of turning a big craft like the Supercat 38 to bolt back into the protected waters of the Kowie. One just has to take a decision and ride into whatever Mother Nature hurls at you.

They were adrenaline pumping moments, but then that’s how it is with each launch of this incredible craft. The sight of a cresting wave approaching, a moment of involuntary freezing as the craft’s bows cut into the approaching water, and then the almost anticlimax as the wave disappears between the sponsons as she carries on at a constant velocity towards the open sea.

Normally one would expect the bow to rear up over the wave, with white water everywhere, and a big thump as the craft lands over the wave’s shoulder. Not so with the Supercat 38. Her displacement hulls and overall above-the-waterline design make launches like these all too easy.

While I was reviewing the Supercat Sliver 29 during the autumn of 2007, I had the opportunity to play with a Supercat 38 Sport Custom that was due to be handed over to her new owner the following day. Serenade, as she had been named, had been redesigned significantly to suit her new owner’s intended use of the craft. I was more than curious to scrutinise the above-deck changes and to see how this craft handled the additional power provided by the twin 115hp 4-stroke Suzuki motors that were mounted on her transom, compared to the twin 50hp 4-stroke Yamahas that powered the original Supercat 38 Sport I reviewed. 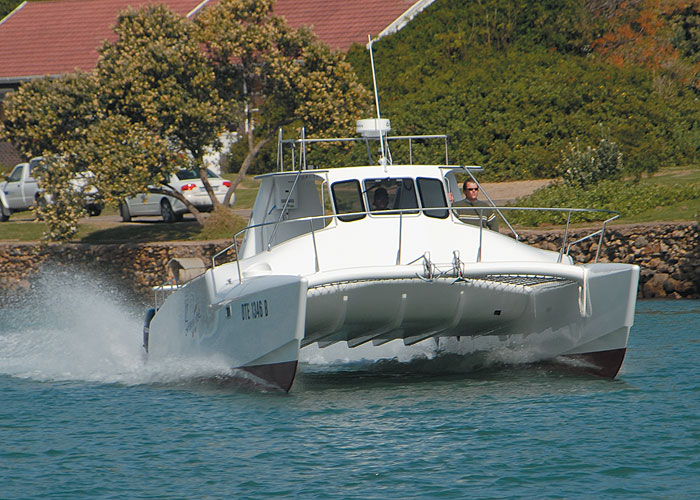 It is the latter that I will dwell on first. A major aspect of this craft’s performance is to understand — and get used to — the difference between the performance of a displacement hull (as used in the Supercat 38) and the planing hull of the conventional ski-boat we are familiar with. Indeed, we are all used to skimming over the water’s surface, but a displacement hull slices through the water, retaining its waterline depth throughout its performance.

For this reason, all a displacement hull requires from its power source is constant forward thrust. Motor trim during performances will detract from the craft’s ride and speed.

On the other hand, with a planing hull — be it a 16ft ski-boat or a 40ft sportfisher — the skipper’s ability to lower or lift the craft’s attack on the sea will assist greatly in the optimisation of the craft’s planing stance, thereby increasing or decreasing the hull’s wetted area and consequently its speed over the water. With outboard powered craft, much of the motor’s thrust is diverted in trimming, thus subtracting that effort from forward thrust of the motors and, therefore, reducing speed.

Dennis Schultz explained that he always demarcates the Supercat 38’s hull’s waterline by having the anti-fouling painted a contrasting colour to the upper gunnel area. He then tells the new owner to trim his craft to that exact waterline, both with motor trim and onboard weight and crew placement. This will ensure optimum use of power.

It’s a long story to explain why an increase of power from 50hp to 115hp only produces an additional four to six knots in overall top speed, but a story that should go a fair way to helping readers to understand the theory. However, only a ride on a craft such as the Supercat Sliver 29 or the 38 Sport will put one in a position to fully appreciate the ride and performances of these displacement hulled crafts.

Getting behind the helm of Serenade, gradually opening her throttles as I made my way down the Kowie River, quickly brought back the memories of the full test I did in early 2001 on the first Supercat 38 Sport. With a ride that’s so different from the norm, it’s no wonder the experience is never forgotten.

What I really wanted to experience, though, was the effect of substantially increasing the power. I had watched her performing for the cameras and noticed that when she was accelerating very quickly, she seemed to be pushing a lot more white water than I remembered when watching the first Supercat 38, powered by its twin 50hp Yamahas. 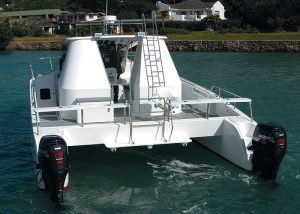 This perception was in fact accurate, as the initial acceleration with the bigger motors is much, much quicker, thus creating more white water than with the smaller motors whose gradual increase of speed seemed to maximise the benefits of this hull.

Whilst saying this — and proving it during my own onboard trials — I must admit that I enjoyed having the extra power at my disposal as it added that extra excitement of pushing the throttles forward and feeling the craft’s quick acceleration. This acceleration is so completely different to what I’m used to on ski-boats and sportfishers. There’s no wanting to climb out of the water as with a planing hull. There’s just a slicing forward motion that never quite seems to be going as fast as the onboard GPS indicates.

It is this aspect — actual speed relative to perceived speed — that had me totally confused during the original test. I have always prided myself on being able to judge a craft’s speed, but not with these Supercats. An actual speed of 20 knots SOG feels to me much more like 15 knots. So much so, that when I did the test on the original Biotech, I dug out my own handheld GPS as I thought that the one on the craft was faulty.

The design of these hulls really is different to what we’re used to, and I still battle to understand how, when you increase power by 120%, your top speed only increases by a maximum of five knots.

At the end of this review there’s a report written by Dennis’s son, Clinton, detailing his delivery of Serenade, from Port Alfred to Simon’s Town, which will give readers a better idea of this craft’s long range capabilities.

The superstructure of this custom-built craft was changed to suit the new owner’s specific requirements, and I was surprised to see how much could be achieved without detracting from the craft’s overall striking appearance. Also, adding some extra weight did not adversely affect her performance.

This particular craft will spend a lot of her time cruising around the ocean as well as fishing, so more emphasis has been placed on onboard comforts and practical requirements for catering and for guests, opposed to just a bunch of fishermen. 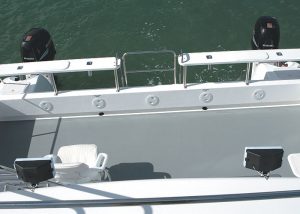 The structure which contains the galley on the port side and heads (toilet) on the other, while taking up a fair amount of space, provides spacious and practical facilities for those onboard. The cockpit helm station area has also been separated from the craft’s fish deck, making it a lot cosier with its lateral seating, and providing more protection for guests in inclement weather than on the express model I originally reviewed.

The helm station itself is well positioned, making it very comfortable to skipper this craft, and has all the instrumentation necessary for running Serenade, as well as for ensuring the safety of those aboard

In the forward half of each sponson there’s a cabin which is accessed via a hatchway and steps in the side of the forward helm station area. Both cabins are comfortable and adequate for the purpose for which they were designed. Between the forward sponsons is a tightly-strung trampoline, surrounded by a substantial stainless-steel bow rail, making this an ideal suntanning area for the ladies or even a platform from which an angler can cast a fly or plug. 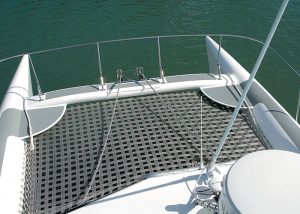 Supercat have moved the craft’s transom a lot further back to increase the size of the aft deck area. This not only provides for a larger entertainment facility, but will also be more practical for the fishermen aboard. The full transom and trolling boards are sufficiently far aft that one can walk a big fish around the back of the craft without venturing out onto the “sugar scoops”of the aft sponsons supporting the twin 115hp Suzukis powering this craft.

Dennis and his sons, Neil and Clinton, have combined all their design and production skills, together with a huge amount of enthusiasm, to built Serenade to the most stringent requirements of her new owner. Indeed, they have achieved outstanding results, both in overall design and in her finishes.

Despite her redesigned format, this craft has all the sea handling capabilities of her predecessors which have found favour in a number of ports and islands off the tropical east African coast. It is in places like this that the Supercat 38 really comes into her own. Her shallow draught, low horsepower requirements and economical fuel usage, as well as her comfortable layout, make her the ideal craft for playing in the sun.